Effect of long non-coding RNA highly up-regulated in liver cancer (HULC) on the prognosis of cancer: A meta-analysis

*Yong Li and Yi-Hong Liu contributed equally to this work

Cancer is a disease, which come from interactions between genetic and environmental factors [1]. Although the target therapy and precision medicine have developed in some cancers, the outcome of most cancers is still poor and disappointing. Thus, it is urgent to find an useful biomarker of cancer prognosis.

long non-coding RNAs (lncRNAs) have important roles in biological processes. The role of lncRNAs is involved in many disease, including cancers [2]. For example, the expression of HOTAIR was a predictor of cancers [3].

691 patients with cancer were included in this meta-analysis. All the studies were cohort studies. There were 6 studies of Asian populations and 1 study of American population. The cancer types included pancreatic cancer, osteosarcoma, hepatocellular carcinoma, gastric cancer, and diffuse large B-cell lymphoma. The sample sizes included from 33 to 304. All the studies provided overall survival (OS) data. The NOS were high, suggesting that the quality of the included studies were well. The characteristics of each study are presented in Table 1.

Figure 1: The association between HULC and OS in cancer.

Figure 2: The association between HULC and OS in cancer in Chinese patients.

Figure 3: The association between HULC and OS in osteosarcoma.

Figure 4: The association between HULC and OS in gastric cancer.

Figure 5: The adjusted result of the association between HULC and OS in cancer.

The s funnel plot was symmetrical (Figure 6). In addition, no significant publication bias was detected by Begg’s test (P = 0.272). 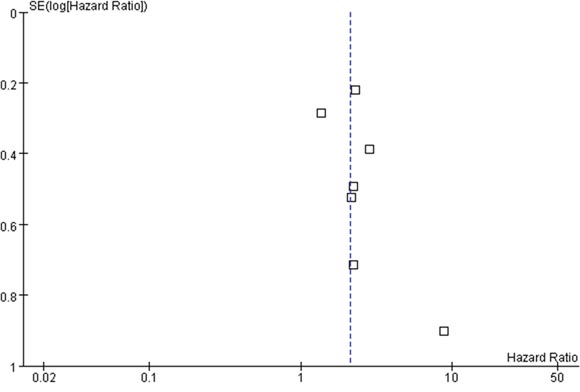 Figure 6: The funnel plot of the association between HULC and OS in cancer.

Some limitations should be addressed. First, another studies are needed to determine the results among different races. Second, publication bias cannot be ruled out. Third, we did not perform other subgroup analyses due to limited data.

In conclusion, this meta-analysis suggested that HULC was a biomarker of the prognosis of cancer.

A comprehensive online search was conducted on Online electronic databases (PubMed, EMBASE, and Wanfang database) from the earliest date to Aug 30, 2016. The words (or carcinoma) and (highly up-regulated in liver cancer or HULC) were searched, with no language or other restrictions. The whole text was reviewed if information in title or abstract is not sufficient to make a decision. Secondary searches of literature were conducted by searching the reference lists of the selected studies and relevant reviews to avoid missing.

Studies were included if they met the following criteria: [1] case–control or cohort study; [2] about the association between HULC and the survival of cancer; and [3] had available data or could be calculated from the paper. Accordingly, the exclusion criteria were [1] duplicate data, [2] reviews, abstracts, case report, or animal studies.

The following data were recorded from each article: first author, year, race, cancer type, numbers of patients, outcome, parameters used for adjustment, study design, study location, tumor stage, cutoff value, and analytical method. The data were extracted by two of the authors independently. Discrepancies between these two authors were resolved by discussion. The included studies were assessed independently by the two reviewers using the Newcastle-Ottawa Scale (NOS).

The strength of association between HULC and the survival of cancer was estimated by HR with corresponding 95% CI. Q-statistic was applied to investigate heterogeneity among studies. P-value greater than 0.1 for Q test suggested a lack of statistically significant heterogeneity. The random-effect model (DerSimonian-Laird method) was used. In addition, the I2-test was employed to accurately measure the degree of heterogeneity. Furthermore, the I2-value less than 25% was equivalent to mild heterogeneity, and values between 25% and 50% was equivalent to moderate heterogeneity, whereas values greater than 50% was equivalent to large heterogeneity among studies. Potential publication bias was estimated by symmetry of funnel plot of HR versus the standard error of log (HR) and the visual symmetrical plot indicated that there was no publication bias among studies. Stratified analyses were conducted in terms of race and cancer type. All statistical tests in this meta-analysis were two-tailed and P-value ≤ 0.05 was considered statistically significant unless otherwise noted. All statistical analyses were performed with Revman 5.1 software (Nordic Cochrane Center, Copenhagen, Denmark) and STATA 11.0 software (Stata Corporation, College Station, TX).