Association of three promoter polymorphisms in interleukin-10 gene with cancer susceptibility in the Chinese population: a meta-analysis

Numerous studies have examined the associations of three promoter polymorphisms (-1082A/G, -819T/C and -592A/C) in IL-10 gene with cancer susceptibility in the Chinese population, but the results remain inconclusive. To gain a more precise estimation of this potential association, we conducted the current meta-analysis based on 53 articles, including 26 studies with 4,901 cases and 6,426 controls for the -1082A/G polymorphism, 33 studies with 6,717 cases and 8,550 controls for the -819T/C polymorphism, and 42 studies with 9,934 cases and 13,169 controls for the -592A/C polymorphism. Pooled results indicated that the three promoter polymorphisms in IL-10 gene were significantly associated with an increased overall cancer risk in the Chinese population. Stratification analysis showed that the association was more pronounced for hepatocellular carcinoma and low quality studies for the -1082A/G polymorphism, lung cancer and oral cancer for the -819T/C polymorphism. However, the -592A/C polymorphism was associated with a statistically significant increased risk for lung cancer, oral cancer, hospital-based studies and low quality studies, but a decreased risk for colorectal cancer. We further investigated the significant results using the false-positive report probability (FPRP) test. Interestingly, FPRP test results revealed that only IL-10 -1082A/G polymorphism was truly associated with an increased overall cancer risk. In the subgroup analysis, only the low quality studies, lung cancer and colorectal cancer remained significant at the prior level of 0.1. Although this association needs further confirmation by considering large studies, this meta-analysis suggested an association between IL-10 gene polymorphisms and cancer risk in the Chinese population.

Cancer is still a global public health problem. According to the GLOBOCAN estimates, about 14.1 million new cancer cases and 8.2 million deaths occurred in 2012 worldwide [1]. In China, cancer has become the leading cause of death since 2010, with an estimate of 4292,000 new cancer cases and 2814,000 cancer deaths in 2015 [2]. As a multifactorial disease, it involves both genetic and environmental factors [3]. Accumulating evidence has indicated that inflammation plays a vital role in cancer development [4–6], and approximately 20% of all cancers are associated with chronic inflammation [7].

Interleukin-10 (IL-10) is an anti-inflammatory cytokine with both immunosuppressive and immunostimulatory activities [8]. Although the relationship between IL-10 and cancer has been extensively studied, the exact role of IL-10 in cancer is still elusive, since IL-10 have both cancer-promoting and -inhibiting properties [9, 10]. In view of these properties, we hypothesized that IL-10 gene polymorphisms could influence cancer susceptibility.

The IL-10 gene is located on chromosome 1q31-32, and is composed of five exons and four introns. IL-10 gene promoter region is highly polymorphic, and three promoter single nucleotide polymorphisms (SNPs) such as -1082A/G (rs1800896), -819T/C (rs1800871) and -592A/C (rs1800872) have been reported to regulate IL-10 expression [11, 12] and alter the susceptibility to various types of cancers [13–16]. In the Chinese population, numerous case-control studies were performed to investigate the role of IL-10 -1082A/G, -819T/C and -592A/C polymorphisms in cancer risk. However, the results remain inconclusive. Hence, we performed the present meta-analysis to investigate the association between three polymorphisms in IL-10 gene and cancer susceptibility in the Chinese population. 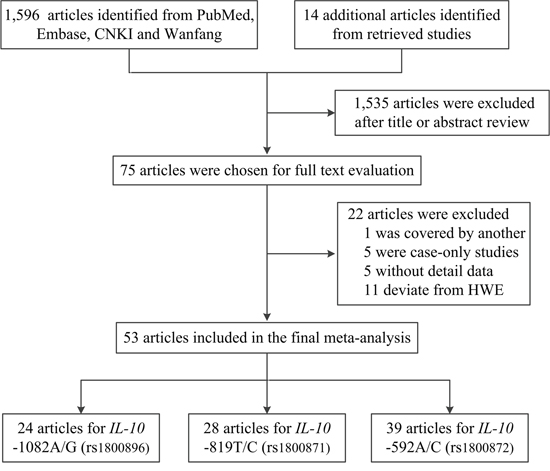 Table 2: Meta-analysis of the association between IL-10 polymorphisms and cancer risk

a Lung cancer was only calculated for the dominant model. 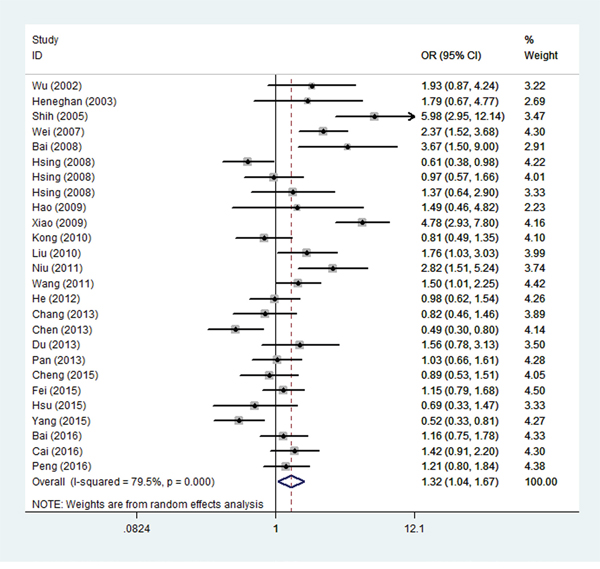 Figure 2: Forest plot for overall cancer risk associated with the IL-10 -1082A/G polymorphism by a dominant model. For each study, the estimated OR and its 95% CI are plotted with a box and a horizontal line. ◊, pooled ORs and its 95% CIs. 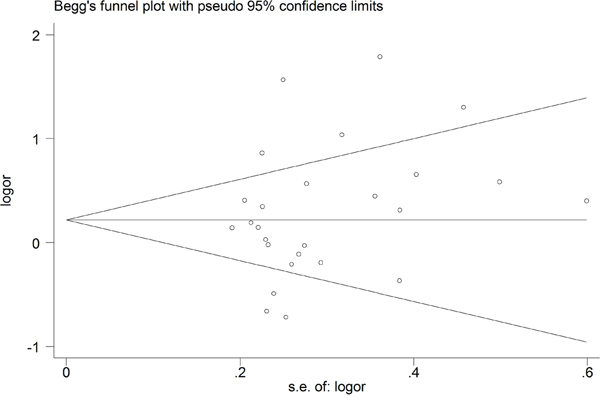 aChi-square test was used to calculate the genotype frequency distributions.

bStatistical power was calculated using the number of observations in the subgroup and the OR and P values in this table.

In this meta-analysis, we comprehensively investigated the associations between three promoter variants (-1082A/G, -819T/C and -592A/C) in IL-10 gene and cancer risk in the Chinese population through 53 articles. The results revealed that all the three IL-10 gene polymorphisms we considered were associated with an increased overall cancer risk. Stratification analysis showed that the association between the -1082A/G polymorphism and cancer risk was more evident for hepatocellular carcinoma and low quality studies, the association between the -819T/C polymorphism and cancer risk was more obvious for lung cancer and oral cancer. However, the -592A/C polymorphism showed a statistically significant increased risk for lung cancer, oral cancer, hospital-based studies and low quality studies, but a decreased risk for colorectal cancer. To our knowledge, this is so far the first meta-analysis that has assessed multiple promoter polymorphisms in IL-10 gene with cancer risk in the Chinese population.

To make our significant findings more noteworthy, FPRP analysis was performed. Interestingly, FPRP test results revealed that only the association between IL-10 -1082A/G polymorphism and overall cancer risk remained significant at the prior probability level of 0.1. In the subgroup analysis, only the low quality studies, lung cancer and colorectal cancer remained significant. Other findings were false-positive, which might be due to the limited sample size.

Our present meta-analysis has some highlights. First, it identified the significant association between IL-10 -1082A/G, -819T/C and -592A/C polymorphisms and an increased overall cancer risk in the Chinese population. Second, the quality of each included study was evaluated by the quality score criteria. Third, no publication bias was detected in the study, indicating the robustness of the results. Finally, the significant findings were further validated using the FPRP test, making the results more authentic. However, some possible limitations should be considered. First, the total sample size in each individual study was less than 1000 in all but four studies [69, 82, 85, 86], which might reflect a difficulty to evaluate the real association. Second, our results were based on unadjusted estimates, which might cause confounding bias. Third, in the subgroup analysis by cancer type, only two studies were included for some types of cancer, which might affect the detection of the real association. Finally, the potential gene-gene, and gene-environment interactions were not assessed due to the lack of information in the original studies.

In conclusion, this meta-analysis suggested an association between IL-10 gene polymorphisms and cancer risk in the Chinese population, especially for lung cancer, colorectal cancer and low quality studies. Well-designed studies with large sample size are required to verify our findings.

A systematic literature search was conducted in PubMed, Embase, CNKI and Wanfang database using the following MeSH terms and their synonyms: (“interleukin-10” or “interleukin 10” or “IL-10” or “IL 10”) AND (“polymorphism, single nucleotide” [MeSH] or “SNP” or “single nucleotide polymorphism” or “polymorphism” or “variant” or “variation”) AND (“neoplasms” [MeSH] or “neoplasia” or “neoplasm” or “tumor” or “malignancy” or “cancer”), up to 19 January, 2017. In addition, review articles and references of the selected articles were manually searched to identify additional relevant articles. Only the most recent publications or the ones with most participants were included in the final meta-analysis in cases of overlapping data.

The inclusion criteria were as follows: (1) studies investigating the association between IL-10 -1082A/G, -819T/C and -592A/C polymorphisms with cancer risk in Chinese populations; (2) case-control studies; (3) studies providing sufficient data for calculation of ORs and 95% CIs. Studies were excluded if any of the following aspects existed: (1) not a case-control study; (2) duplicate publications; (3) studies without available genotype data; (4) review articles, meta-analyses, conference abstracts or editorial articles; and (5) genotype frequencies in the controls departure from HWE.

Two investigators independently extracted the relevant data from all included studies based on the inclusion criteria listed above. Disagreement was resolved by discussion with a third investigator. The following information was extracted from each included study: first author’s surname, publication year, cancer type, control source (hospital-based or population-based), genotyping methods, and number of cases and controls with different genotypes.

Two independent investigators assessed the qualities of all included studies according to the criteria from a previous meta-analysis [97]. Quality scores of studies ranged from 0 (lowest) to 15 (highest), and the studies with scores > 9 were considered of high quality.

The strength of association between IL-10 -1082A/G, -819T/C and -592A/C polymorphisms and cancer risk was assessed by calculating the ORs and the corresponding 95% CIs. The pooled ORs were calculated for the homozygous model, heterozygous model, recessive model, dominant model and an allele comparison. The between-study heterogeneity was quantified by chi-square based Q test and the fixed-effects model (the Mantel-Haenszel method) [98] was used when no significant heterogeneity was observed (P > 0.1); otherwise, the random-effects model (the DerSimonian and Laird method) [99] was adopted. Subgroup analysis was performed by cancer type (if one cancer type contained less than two studies, it was merged into the “other cancers” group), control source (hospital-based studies and population-based studies), and quality scores (≤ 9 and > 9). Sensitivity analysis was performed to assess results stability. Publication bias was examined using Begg’s funnel plot and Egger’s linear regression test.

The FPRP was calculated to examine the significant associations found in the present meta-analysis. FPRP was calculated with 0.2 as a FPRP threshold and a prior probability of 0.1 was assigned to detect an OR of 0.67/1.50 (protective/risk effects) for an association with the genotypes under investigation [100]. FPRP values below threshold 0.2 were considered as noteworthy associations. All the statistical tests were performed using STATA version 12.0 (Stata Corporation, College Station, TX). All the P values were two-sided, and P < 0.05 were considered statistically significant.

This work was supported by the Key Scientific and Technological Project of Henan province (Grant No. 162102310413).