Methods: This is a prospective study. Eighty cases of hip fracture surgery in the elderly population were studied to reveal the relationship between the CRP/PNI ratio and the clinicopathological characteristics of the elderly patients. Clinical data included age, sex, weight, length of stay, duration of surgery, comorbidity, and biological data were collected. The primary endpoint was the 1-year mortality rate.

Hip fracture is a fracture of the upper part of the femur, and has high incidence in the elderly [1]. Hip fractures in aged people leads to high mortality, high risk of postoperative complication, and impaired quality of life [2–5]. The mortality is increased from 8.4% to 36% in the first postoperative year [6].

The risk factors for mortality following hip fracture surgery was demonstrated in some studies [7], we hope to reveal the clinically relevant biomarkers to evaluate prognosis and complication events. It has been reported that serum albumin level and lymphocyte count served as an independent prognostic factor in hip fracture patients [8]. The prognostic nutritional index (PNI) is calculated by the serum albumin concentration and the peripheral blood lymphocyte count [9]. Albumin is an indicator of nutritional status which is correlated with post-operative complications [10]. The PNI can be used to assess the immunological and nutritional status of surgery patients [11], and estimated according to the following formula: 10 × serum albumin (g/dL) + 0.05 total lymphocyte count (/mm3) [12]. C-reactive protein (CRP) is an inflammatory marker which is closely related to the infections and outcomes in orthopaedics [13]. And PNI is associated with cancer mortality and has a prognostic value [14]. 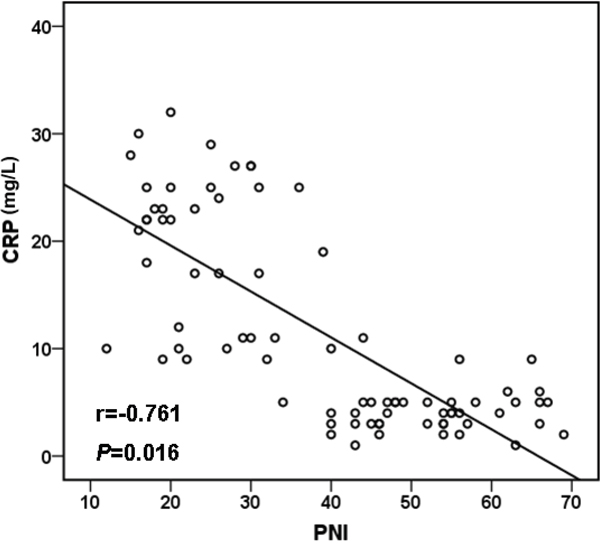 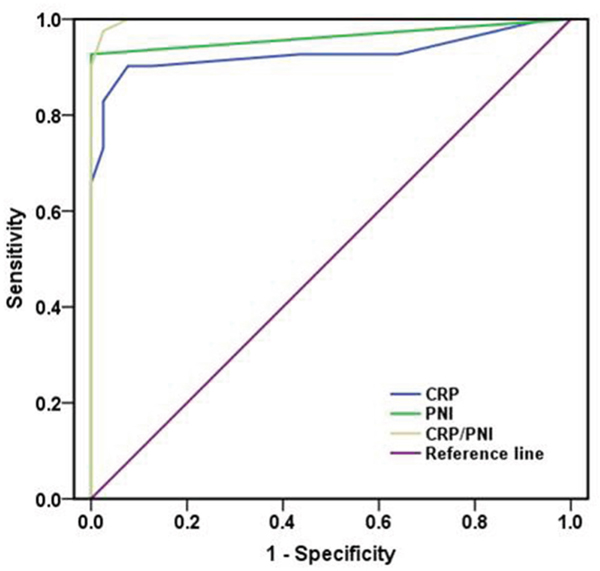 Infection or traumas has a strong relationship with inflammation. Previous data have shown that CRP is a sensitive and non-specific inflammatory marker of human infection or traumas [15]. CRP is proved to be very useful in diagnosis and functioned as a monitor of infections in orthopaedics [13]. A retrospective analysis conducted by Kim et al. [15] revealed that preoperative CRP was an independent risk factor for 1-year mortality after hip fracture surgery in the elderly. In our current research, these patients with low CRP levels (≤10.0 mg/L) had better survival than those with CRP >10.0 mg/L (83.7% vs. 5.6%, P <0.001). Regrettably, in the multivariate analyses, there was no evidence to prove that CRP was an independent prognostic factor (P =0.054).

The PNI was designed to assess the immunologic and nutritional aspects of surgical patients [16], and calculated by the serum albumin concentration and the lymphocyte count in the peripheral blood [17]. Hypoalbuminemia served as a potential preoperative predictor of outcomes [18]. Lu et al. showed that a lower serum albumin level and total lymphocyte count were important risk factors to predict the one-year mortality of elderly patients with fracture [19]. However, few studies focused on PNI in elderly patients after hip fracture surgery. In our data, PNI was not an independent prognostic factor (P =0.067).

In our Cox regression model, multivariate analyses revealed that the CRP/PNI ratio was an independent prognostic factor. Our data showed that the AUC was higher in CRP/PNI ratio than CRP (0.928) or PNI (0.963) by ROC analyses. High levels of CRP/PNI ratio could help us to avoid adverse consequences. Patients will benefit from the CRP/PNI ratio, especially in the elderly patients.

Nevertheless, several limitations should be paid attention in this study. Firstly, this study is a retrospective and single-institution study. Secondly, the number of patients was not adequate (n =80). Thence, larger prospective studies need to be carried out to confirm these preliminary results.

The data of 80 elderly patients after hip fracture surgery in Shanghai Pudong Hospital between 2015 and 2016 were collected in our study. The 70 years of age or older patients were included, and the patients were excluded if CRP, platelet count, leukocyte count, lymphocyte counts, hemoglobin and albumin measurements were lacking. Ethical approval was obtained for the study protocols and informed consents were obtained from each patient.

The mean follow-up period for these patients was 8.7 months (range: 3–12 months). All patients were followed up by phone monthly. The endpoint was mortality within one year.

All statistical analyses were used the SPSS version 22.0 statistical software. The association between CRP and PNI were studied using the Spearman rank correlation test Survival analysis. For analysis of survival data, Kaplan-Meier curves were constructed, and the log-rank test was used for analysis. Univariate and multivariate analyses were performed using Cox’s proportional hazards model. Differenceswere considered statistically significant when P value was less than 0.05.

1. Heiberg KE, Bruun-Olsen V, Bergland A. The effects of habitual functional training on physical functioning in patients after hip fracture: the protocol of the HIPFRAC study. BMC Geriatr. 2017; 17: 23.