Acute ischemic stroke contributes substantially to the global burden of disease and disability with the aging of the population [1, 2]. The cost of stroke and Stroke cytoprotection were high, with a global stroke incidence of 10.3–16.9 million annually and a high risk for recurrence in patients who suffer an acute stroke [3, 4]. Large-artery atherosclerosis subtype is one of the main types of acute ischemic stroke. The cumulative 1-year event rates of noncardioembolic ischemic stroke were 18% for combined vascular events in China [5]. Hypertension, hyperlipidemia and diabetes are involved in the development of atherosclerosis,which plays an important role in the process of large cerebral artery stenosis. Patients with well-controlled these factors still have a high incidence of cardiovascular events [6-8]. Thus, finding the risk factors of large cerebral artery stenosis is a topic of considerable interest.

Cystatin C (CysC), a 13-kD protein, is encoded by CST3 gene and constitutively expresses in all nucleated cells [9]. CysC is considered as an excellent biomarker of glomerular filtration rate estimation [10] because serum CysC is better than serum creatinine in the evaluation of renal function [10, 11]. Moreover, Serum CysC levels are less dependent on muscle mass, age, race and sex than creatinine [12]. In addition, serum CysC also serves as an indicator of renal function for the adjustment of medication doses [13, 14]. A recent study demonstrated a close correlation between elevated serum CysC levels and ischemic stroke or hemorrhagic stroke, and increased serum CysC may be used as a predictor for high risk of stroke or death [15]. Our previous studies also demonstrated that increased serum CysC is an independent risk factor for acute ischemic stroke [16]. Thus, it is important to detect the levels of serum CysC in patients with stroke.

CysC, an excellent biomarker of glomerular filtration rate estimation, is a risk factor for cardiovascular events [17]. Patients with carotid atherosclerosis have higher concentration of serum CysC [18, 19]. However, the correlation between increased serum CysC and the stenosis of large cerebral arteries in patients with AIS is unclear. Therefore, we examined the relationship between CysC and large cerebral artery stenosis in patients with acute ischemic stroke.

Serum CysC increased in patients with AIS and stenosis

Among 252 patients with AIS, 131 subjects (52.0%) were categorized as the normal group without large cerebral artery stenosis and 121 patients (48.0%) were in stenosis group with large cerebral artery stenosis. Demographics, baseline physical exam characteristics, and laboratory variables were listed in Table 1. There was no difference in age, sex, SBP, and CRP between control group and stenosis group.

a Data represented the median(IQR).

Among the patients, serum CysC levels increased significantly in stenosis group compared with normal group (P<0.001) as shown in Figure 1. These data suggested that the increase of serum CysC was related to large cerebral artery stenosis in patients with AIS, even when those possible confounders (age, sex, smoking, type 2 DM, dyslipidemia, Cr, Urea, Uric acid, hcy, CRP) were adjusted as shown in Table 2. 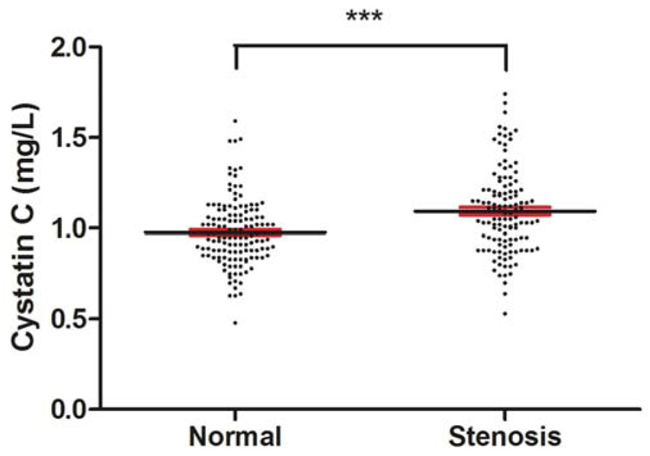 Table 5: The association between CysC and the risk of stenosis

CysC is highly espressed in the central nervous system [22]. Studies reported that the concentration of CysC in cerebrospinal fluid is more than 5 times in the blood, which implies that CysC plays an important role in the central nervous system [23]. The close association between increased serum CysC and cerebral small vessel disease has been reported [24]. In this study, it is the first time to use DSA for the evaluation of large cerebral artery stenosis and examine the relationship between increased serum CysC and large cerebral artery stenosis. So far, DSA remains the golden standard for lumenographic imaging method and visualizing the degree of stenosis with excellent resolution, despite of the fact that it has some disadvantages [25, 26]. Our findings demonstrated that increased serum CysC was an independent risk factor for large cerebral artery stenosis in patients with AIS.

Major mechanisms regulating cerebral artery function have been reported [27], and atherosclerosis may predispose to clinical stroke. Importantly, molecular targets that may be of beneft for patients in clinical stroke and perhaps the prevention or treatment of ischemic stroke, were identifed. Cerebral artery function is very sensitive to endothelial dysfunction that occurs during chronic disease, resulting in impairment of vasodilator mechanisms. Atherosclerosis is the underlying pathological process for large cerebral artery stenosis, which is a main cause of cerebrovascular disease [28].

The presence of renal dysfunction is closely associated with cardiovascular events. A recent study demonstrated that decreased epidermal glomerular filtration rate is only associated with an increased risk of ischemic stroke [29]. Moreover, microalbuminuria associated with vascular endothelial dysfunction in deep small infarcts and cerebral small vessel disease have been reported [29-31]. Recent study showed that increased CysC levels were more closely related to large-artery atherosclerosis (LAA) subtype of cerebral infarction than other subtype [32], suggesting CysC may play a role in the process of atherosclerosis. The elevated levels of CysC in serum were not just in acute stress reaction [33]. Chronic inflammation is known to promote the development of atherosclerosis [34], The correlation of CysC with chronic inflammation was discussed [35], which implied CysC may be involved in the process of large cerebral artery stenosis via chronic inflammation. In addition, as an inhibitor of cysteine proteases, high levels of serum CysC directly affect the process of vascular wall remodeling by breaking the balance of proteolytic and anti-proteolytic activities [36]. Importantly, our data reported that elevated CysC levels were an independent risk factor for large cerebral artery stenosis in patients with AIS. Thus, it is important to detect the levels of CysC, especially in AIS patients with large cerebral artery stenosis.

There are some limitations in this study. Firstly, data were gathered from a single hospital and sample size was limited: this may caused inherent biases. Secondly, We have only examined the levels of CysC during hospitalization, it could not reveal whether the increased CysC levels were an outcome or a causative factor in cerebral vessel disease. Thirdly, the mechanism of independent association of increased the serum CysC with large artery stenosis remains unclear, and further experiments to explain are needed. Therefore, further follow-up study is needed. In addition, the relationship between cerebral vessel stenosis and serum CysC levels still needs to be elucidated by careful design of longitudinal studies.

This study was approved by the Ethics Committee of the Second Affiliated Hospital of Soochow University. Total 252 patients with acute ischemic stroke who were examined with cerebral digital subtraction angiography (DSA) within 7 days stroke from January 2012 to December 2015 in the Second Affiliated Hospital of Soochow University were enrolled in this study. All the patients provided informed consent forms to participate. Acute ischemic stroke were defined as acute focal neurological deficits, which lasted more than 24 hours and was confirmed by the presence of computed tomography and/or magnetic resonance imaging. Large cerebral artery stenosis was defined as a narrowing of the relevant artery lumen of ≥50% or occlusion by viewing cerebral DSA videos. Accordingly, all patients were divided into two groups: stenosis group and normal group. Ischemic strokes were categorized originally into five groups as recommended by the diagnostic criteria [37]: large-artery atherosclerosis, cardioembolism, small-vessel occlusion, other etiology, and undetermined etiology. The exclusion criteria included patients with encephalitis, neurodegenerative diseases, hematological disorders, and serious systemic diseases such as urinary, cancer, trauma, infectious.

Measurement of serum CysC and other risk factors

Serum CysC, urea, creatinine, C-reactive protein (CRP), uric acid, triglycerides, high-density lipoprotein (HDL) cholesterol, fasting plasma glucose, low-density lipoprotein (LDL) cholesterol, and total cholesterol (TC) were measured after overnight fasting by using venous blood samples. The methods for these biochemical parameters were performed as in our previously reported [16]. Hypertension was considered to be present if patients had been previously diagnosed according to guidelines set by the World Health Organization and the International Society of Hypertension. Diabetes mellitus was determined by the previous use of anti-diabetic medication, fasting blood glucose ≥ 7.0 mM, or postprandial blood glucose after 2 hours ≥11.1 mM.

Large cerebral artery was defined as the internal carotid artery main stem, the middle cerebral artery (M1), and the vertebral-basilar artery [38, 39]. Large cerebral artery stenosis was defined as a narrowing of the relevant artery lumen of ≥50% or occlusion by viewing cerebral DSA videos [40]. Angiography was performed through a common femoral artery approach, using a standard guidewire and a 5-French catheter. DSA images were observed on a Philips biplane Easy Vision workstation with anterior-posterior, oblique and lateral views, utilizing a 1024 × 1024 matrix and a 30-cm-diameter image intensifier. Two observers assessed luminal narrowing of cerebral vessel disease by viewing DSA videos without knowing about the symptomatic side.

Descriptive statistics for continuous variables were expressed as the mean ± standard deviation (SD); categorical variables were expressed as constituent ratios. For serum CysC, mean values (±2SE) were depicted graphically based on the cerebral artery status. A general linear model was used to estimate the relationship between adjusted CysC values and large cerebral artery stenosis. Bonferroni tests were implemented to correct the error generated by multiple comparisons. Finally, the association between large cerebral artery stenosis and CysC levels were estimated with regression analyses, and the odds ratio (OR) and 95% confidence intervals (CI) were estimated. All statistical analyses were performed by using the SPSS software (version 24.0) (SPSS Inc., Chicago, IL, USA).

This study was supported by National Natural Science Foundation of China (81200893, 81501081, and 81601147), and the Priority Academic Program Development of Jiangsu Higher Education Institutions of China.

13. Hermida J, Tutor JC. Serum cystatin C for the prediction of glomerular filtration rate with regard to the dose adjustment of amikacin, gentamicin, tobramycin, and vancomycin. Ther Drug Monit. 2006; 28:326-331.