In this study, hMex-3A was selected from TCGA database as a research object to observe the effects of small interfering RNA (siRNA) targeting hMex-3A on the biological activities of human bladder cancer and explore its mechanism for the first time. In this study, there were 2 groups including negative control group and hMex-3A-siRNA-transfected cells group for 5637 and T24 cell lines, respectively. After bladder cancer cells were transfected with the interference RNA sequence, proliferation of transfected cells were assessed by Celigo Cell Counting, and apoptosis were detected by flow cytometry. The knockdown rate of hMex-3A was 74% in 5637 cells and 68% in T24 cells after RNA interference. In addition, Celigo Cell Counting indicated that cell viability was significantly lower in hMex-3A-siRNA-transfected cells group (2196/well) than in negative control group (6777/well) (P < 0.05), but T24 cells did not show statistical significance between hMex-3A-siRNA-transfected cells group (5799/well) and negative control group (7899/well) (P >0.05). Flow cytometer showed that apoptosis was the highest and cells were significantly blocked after cells were transfected in hMex-3A-siRNA-transfected cells group in 5 days later (P < 0.05). Mex-3A protein was detected in bladder carcinoma sections with a mean staining intensity of 7.06±2.60. Mex-3A protein expression was significantly higher in cancerous tissue than in para-cancerous tissue (P <0.05). Our study suggested that siRNA targeting hMex-3A could markedly inhibit cell proliferation and promote apoptosis in 5637 cells. These might have significant implications to bladder carcinogenesis and serve as a potential target for the treatment of bladder cancer.

It is now increasingly clear that post-transcriptional regulation is a fundamental mechanism guiding gene expression in higher eukaryotic cells, such as the core of normal cellular processes, and cancer initiation and development. As we know, RNA maturation, localization, translation and stability are dependent on the cooperation between cis-regulatory elements and trans-acting factors, such as non-coding RNAs and RNA-binding proteins (RBPs) [1–3].

RNA-binding proteins of the evolutionarily conserved Mex-3 family are mediators of post-transcriptional regulation in different organisms, and involved in diverse physiological settings. Mex-3 proteins are associated with diseases, particularly cancer. In humans, Mex-3 was identified and was found to have four homologous genes, Mex-3 A-D [4, 5]. It is important to ascertain their contribution to carcinogenesis and evaluate their potential as markers of cancer progression or prognosis [4].

Table 1: The original data of 19 paired-samples of bladder carcinoma from TCGA database 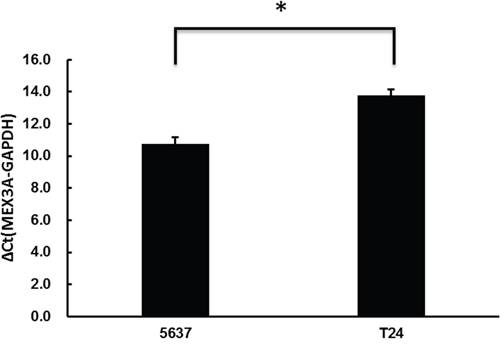 Figure 1: hMex-3A mRNA expression by real-time quantitative PCR in 5637 and T24 cells. Notes: The mRNA level of each sample is normalized to that of GAPDH using the 2-ΔCt method prior to comparative analysis. ΔCt is equal to the difference between the ΔCts of hMex-3A and GAPDH. hMex-3A expression is significantly higher in 5637 cells than in T24 cells (P <0.05). * indicates P <0.05.

5637 and T24 cells were infected by shCtrl and shMex3A slow virus 72 hours respectively, and the results showed that the fluorescent protein expression (green staining) is about 80% by fluorescence microscope, while the cells shape kept normal mainly (Figure 2). 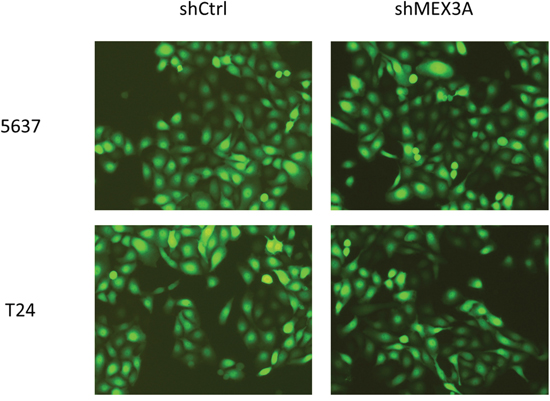 To assess whether hMex-3A has an effect on cell growth, RNA interference against hMex-3A was carried out in the bladder cancer cell lines 5637 and T24. 5637 cells were infected by shCtrl and shMex3A slow virus for 5 days, and fluorescence microscope showed that the cell count was increased in a time-dependent model, but the increase rates were different at different time points. Celigo Cell Counting indicated that 5637 cell growth was slower in hMex-3A-siRNA-transfected group (2196/well) than in negative control group (6777/well) (P < 0.05) in 5 days later. In addition, the cell count and count fold curves showed significant differences between of hMex-3A-siRNA-transfected cells group and negative control group in 5637 cells (Figure 4) (P <0.05). 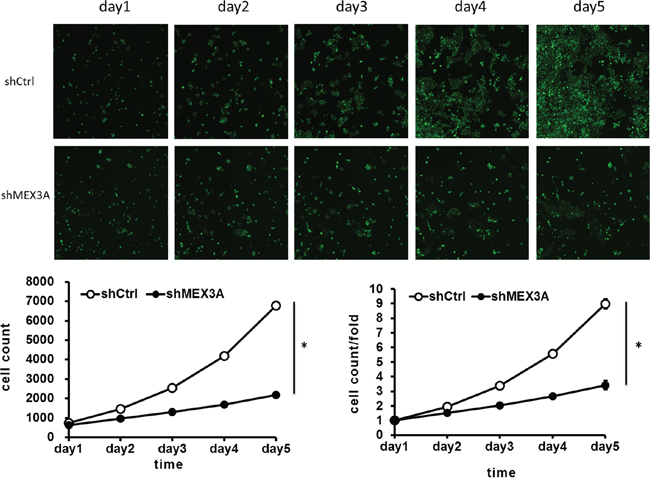 Cell growth was slower in hMex-3A-siRNA-transfected group (5799/well) than in negative control group (7899/well) in T24 cells 5 days later. However, there was no significant difference between the two groups (P > 0.05). The cell count and count fold curves showed no significant differences between of hMex-3A-siRNA-transfected group and negative control group in T24 cells (Figure 5) (P >0.05). It implied that the effect of hMex-3A on cell growth is dependent on cell type. 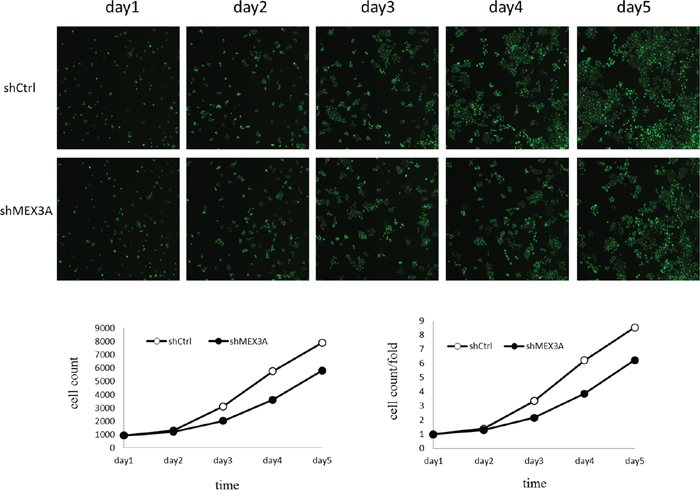 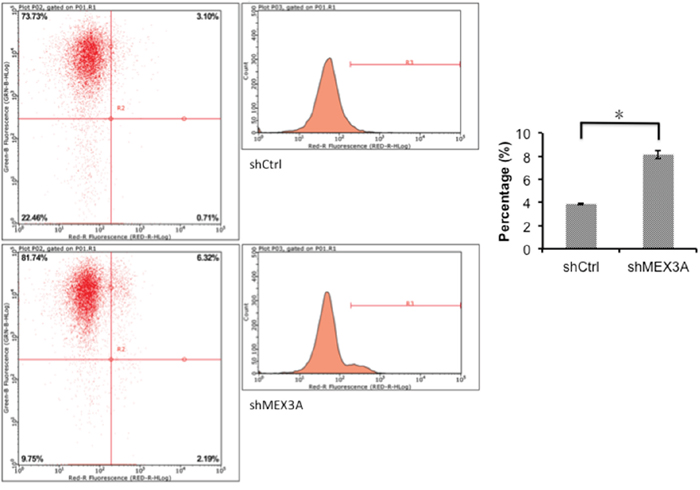 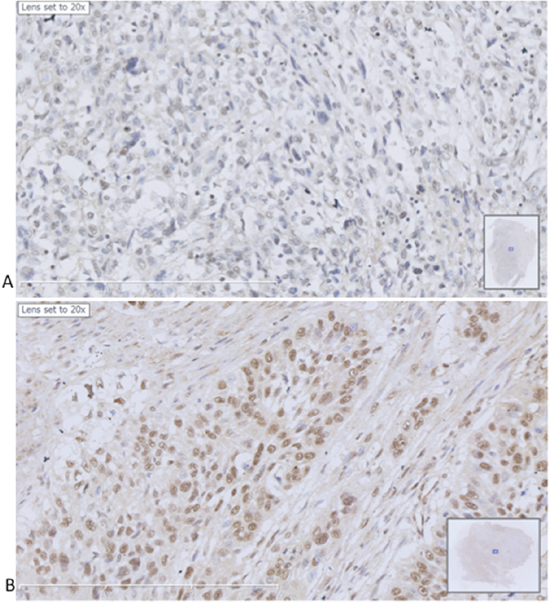 Mex-3 proteins play a role in core biological processes, such as embryonic development, epithelial homeostasis, immune responses, metabolism and cancer. For the time being, the Mex-3 family of proteins can adapt to function in complex and diverse fine-tuning regulatory mechanisms of different organisms by constituting a patterning gene. hMex-3A and 3B are also associated with Argonaute (Ago) proteins (Ago1 and Ago2) which are the key components of the RNA-induced silencing complex and have been implicated in tumor development [6]. Recently, it has been reported that knockdown of Mex3A by siRNAs inhibits cell proliferation and migration in human gastric cancer cells [7]. Like the regulatory role of CDX2 in gastrointestinal homeostasis and carcinogenesis, when human Mex3A was overexpressed in an intestinal cell line, impaired differentiation and altered polarity were observed with gain of stemness features [8]. Interestingly, maintenance of active germ cell mitosis by Mex-3 in C. elegans comprises repression of the cell-cycle inhibitor cyclin-dependent kinase inhibitor-2 (CKI-2) [9], which is orthologs of tumor suppressors. Recently, the functional role of Mex3C as a RNA-binding ubiquitin E3 ligase has been established, mediating the post-transcriptional decay of HLA-A allotypes [10]. It is necessary for normal postnatal growth to enhance the local expression of insulin-like growth factor 1 (IGF1) in bone [11] and IGF1 appears to be involved in metabolic regulation of energy balance [12]. By contrast, Mex3C was described as a new chromosomal instability (CIN) suppressor in CIN+ colorectal cancer [13]. Silencing of Mex3C leads to DNA replication stress, structural chromosome abnormalities, and chromosome mis-segregation. Moreover, Mex3 transcript levels are altered in several cancer types and are associated with disease, such as metabolic changes. Down regulation of murine Mex3C plays an important role in regulation of energy balance, because these mice exhibit reduced adipose deposition and increased energy expenditure [14]. Mex3C mutant mice also display a postnatal growth retardation phenotype; possibly due to a role for Mex3C in enhancing insulin-like growth factor 1 (IGF1) mRNA translation in developing bone, given that IGF1 is a primary mediator of growth hormone effects. Finally, polymorphic variations in human Mex3C may produce the susceptibility to essential hypertension [15]. hMex-3D mRNA also has been found in some cell lines and tissues. A variant form of Mex3D called TINO could negatively regulate the antiapoptotic protein BCL-2 in HeLa cells [16]. All the four proteins predominantly accumulate in the cytoplasm, and shuttle between the cytoplasm and the nucleus via the CRM1-dependent export pathway [17].

In recent years, RNA interference has been widely applied in exploring gene functions by down-regulating the expression of targeted genes. We used this technique to specifically silence hMex-3A expression in the bladder cancer cell lines 5637 and T24. Most notably, hMex-3A has been reported to be associated with Ago proteins 7. Ago proteins are components of the RNA-induced silencing complex and play a crucial role in RNA silencing [22, 23]. Recent studies have revealed that Ago1 and Ago2 play an important oncogenic role in breast and colon cancer [22, 23]. These repots suggest that hMex-3A may be associated with cancer development and progression. In this study, 5637 cell growth was significantly slower in hMex-3A-siRNA-transfected cells than in non-specific siRNA-transfected cells (P <0.05), indicating that 5637 cell line growth is associated with hMex-3A. More importantly, flow cytometry analysis displayed that apoptosis rate of 5637 cells was significantly higher in hMex-3A-siRNA-transfected cells than in non-specific siRNA-transfected cells (P <0.05), further confirming that 5637 cell line growth is associated with hMex-3A. In contrast, the effects of hMex-3A on T24 cells were different from that on 5637 cells. The inhibitory effect of hMex-3A on T24 cell growth was not marked. Also considering that hMex-3A expression level was significantly higher in 5637 cells than in T24 cells, we infer that different inhibitory effect of hMex-3A on 5637 and T24 cells may be associated with different expression levels in invasive and non-invasive bladder carcinoma. Our data imply that hMex-3A is strongly associated with 5637 bladder cancer cells.

The effects of hMex-3 proteins on human bladder tumorigenesis remain to be confirmed by clinical data. And tumorigenesis is a complicated process, so the exact mechanism by which hMex-3A contributes to tumorigenesis should be explored in the future.

All study methods were approved by the Ethics Committee of Shengjing Hospital of China Medical University.

Human bladder cancer 5637 and T24 cells were obtained from the Shanghai Institute of Cell Biology, Chinese Academy of Sciences. T24 cell line with doubling time of 19h containing H-ras oncogene and tumor specific antigen expression was from a 68-year-old white woman with transitional cell carcinoma of bladder. While 5637 cell line was from a 68-year-old man with bladder carcinoma and it could produce SCF, IL-1, IL-3, IL-6, G-CSF, GM-CSF and so on. Cells were grown in Dulbecco’s modified Eagle medium (Gibco BRL/Life Technologies, Gaithersburg, MD, USA) with 100 IU/ml penicillin, 100 mg/ml streptomycin, and 10% heat inactivated fetal calf serum (PAA, Pasching, Austria) in a humidified atmosphere of 5% CO2 at 37°C. Typically, cells were seeded and maintained in the culture incubator for 12 h before the addition of other reagents.

Total RNA was extracted from the cultured cell lines using Trizol reagent (Invitrogen corp, Carlsbad, CA) and reverse-transcribed into cDNA using the M-MLV reverse transcriptase kit (Fermentas Inc, Hanover, MD). The following oligonucleotide primers were used to amplify the Mex-3A and GAPDH genes: Mex-3A forward, 5'-CGGAGTGGACTCTGGCTTTGAG-3' and reverse, 5'-CAGAGGAGAAGAGCACGGAGGT-3'; GAPDH forward, 5'-TGACTTCAACAGCGACACCCA-3' and reverse, 5'-CACCCTGTTGCTGTAGCCAAA-3'. Quantitative real-time PCR was performed with a Thermal Cycler Dice Real Time System (Takara, USA) and SYBR-Green I reagent (Takara, USA). Each sample was amplified in triplicate and the specificity was confirmed by dissociation analysis. The mRNA level of each sample was normalized to that of GAPDH prior to comparative analysis using the 2-ΔCt method.

Design and synthesis of sequences of siRNAs targeting hMex-3A

Typically, 5637 and T24 cells were divided into 2 groups including negative control (non-specific siRNA-transfected cells) group and hMex-3A-siRNA-transfected cells group, respectively. Bladder cancer cells were seeded into 6 well plates for 24 h at a density of 2x105 cells per well. Cells covering 70– 80% of the hole wall were incubated in 2 ml of serum-free DMEM for 2 h followed by transfection according to the instructions of kit. Five hours later, cells were incubated in DMEM containing 10% fetal calf serum for 72 h followed by extraction of RNA.

Real time RT-PCR was performed with an ABI Prism 7700 Sequence Detection System (Applied Biosystems, Darmstadt, Germany) using the Quantitect SYBR Green PCR Kit from Qiagen (Hilden, Germany) following the manufacturer’s guidelines. Oligonucleotide primers were designed according to the sequences mentioned before. hMex-3A mRNA expression level was normalized to GAPDH expression in the cDNA preparation. The testing was performed in triplicate in each sample.

Following transfection with siRNAs at 1, 2, 3, 4, and 5 days, 5637 and T24 cells were harvested. Cell viability was measured using the Celigo Cell Counting (Nexcelom) according to the manufacturer's instructions. The testing was performed in triplicate in each sample.

5637 cells were harvested 5 days after transfection, and then fixed with 1% paraformaldehyde for 20 min at room temperature followed by permeabilization with 0.1% Triton X-100 (Sigma) for 5 min on ice. Staining was performed with anti-Mex-3A antibody and visualized with goat anti-rabbit FITC-conjugated secondary antibody. For DNA content assessment, cells were incubated with a propidium iodide (50 mg/ml) and RNAse A (200 mg/ml) solution (Sigma) for 30 min at room temperature. Cell apoptosis was measured using the Annexin V-APC (eBioscience) according to the manufacturer's instructions. The testing was performed in triplicate in each sample.

15. Guzmán B, Cormand B, Ribasés M, González-Núñez D, Botey A, Poch E. Implication of chromosome 18 in hypertension by sibling pair and association analyses: putative involvement of the RKHD2 gene. Hypertension. 2006; 48: 883-91.