Crohn’s disease (CD), one type of inflammatory bowel disease (IBD) [1], is a life-long, chronic and relapsing disease that may occur anywhere in the gastrointestinal tract [2, 3]. Although its pathogenesis is still poorly understood, genetic predisposition and environment, most notably the gut microorganism were thought to be the important aetiology [4]. However, up to now there is no decisive evidence of an etiologic role for any specific microbe. Whether there is a still unidentified specific microbe implicated in the pathogenesis of CD deserves to be explored.

Helicobacter pylori (H. pylori), a highly adaptive gram-negative bacterium colonized the human gastric mucosa, has co-existed with humans for over 50,000 years [5, 6]. Although it is positively correlated with the pathogenesis of gastric ulcers, gastric cancers and mucosa-associated lymphoid tissue lymphoma, less than 15% and 1% of infected patients will develop gastric ulcer and cancer, respectively [7, 8]. Interestingly, H. pylori was recently isolated and detected in the intestinal mucosa of patients with CD [9]. Additionally, many recent studies have reported that CD patients have lower prevalence of H. pylori infection [10–12]. Furthermore, some reports have shown that there are rapid and clinical onset of CD after eradication of H. pylori infection [13, 14]. Although these researches found an inverse relationship between H. pylori infection and CD, whether H. pylori plays a protective role against CD and the potential protective mechanism remain unclear.

The purpose of this study was to determine whether H. pylori plays a protective role against CD and the potential protective mechanism. For this purpose, we used a murine model of CD-like colitis induced by 2, 4, 6-trinitrobenzene sulfonic acid (TNBS) as described previously [15].

Administration of H. pylori attenuates the severity of TNBS-induced colitis

In order to determine whether H. pylori attenuates the severity of TNBS-induced colitis, we treated mice with NCTC11639 (one H. pylori strain) after administration of TNBS enema and compared the disease activity scores, the colonic weight changes and the macroscopic and microscopic appearances of colons between mice treated with TNBS plus NCTC11639 and mice treated with TNBS only. We found that after administration of NCTC11639 enema, the TNBS-treated mice displayed less weight loss, less bleeding, greater stool consistency and low disease activity scores and had decreased colonic:body weight (Figure 1).

Consistent with the weight changes in the H. pylori-treated mice, we found that the TNBS-treated mice displayed less thickened edematous colonic walls and less mucosal ulcerations after administration of NCTC11639 enema, especially at distal 4–6 cm from the anus (Figure 2). In line with the macroscopic appearances of colons, we found that the mice treated with TNBS+NCTC11639 had less histological scores and displayed alleviated degree of inflammation of the colonic walls compared with the mice treated with TNBS only (Figure 3). Together, these results confirm that administration of H. pylori can attenuate the severity of TNBS-induced colitis. 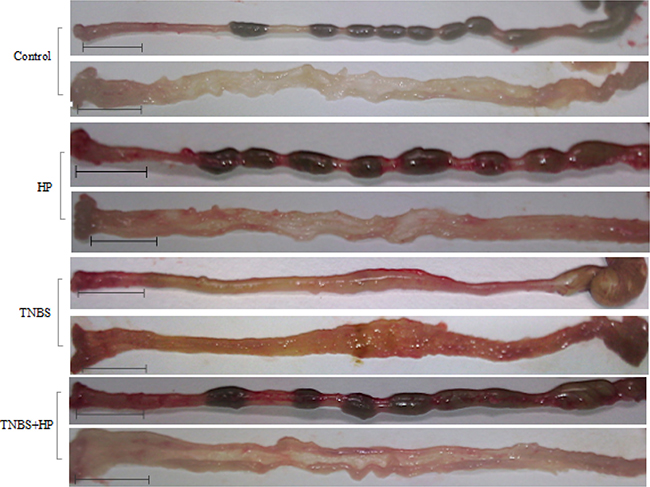 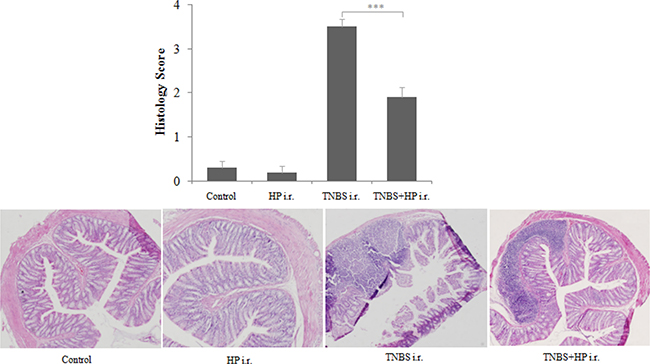 Relative mRNA levels are normalized to β-actin and expressed as a fold relative to the Control groups. Data are shown as the mean ± SD from 10 mice per group. *P < 0.05,**P < 0.01 vs TNBS groups.

Interestingly, we found that the colonic mRNA expression of Th2-related cytokines (IL-4, IL-5, IL-10 and STAT-6) was significantly higher in the mice treated with TNBS+NCTC11639 than in the mice treated with TNBS only (Table 1). Together, these results provide evidence that H. pylori can attenuate the severity of TNBS-induced colitis mainly through regulating the Th17 and Th2 lymphocyte responses.

To further elucidate the potential mechanism by which H. pylori attenuates the severity of TNBS-induced colitis, we treated mice with NCTC11639 after administration of TNBS enema, then isolated CD4+ T in murine colonic mucosa and finally determined the levels of Th17 and Th2 cells by FCM. We found that the mice treated with TNBS+NCTC11639 had decreased levels of Th17 cells, increased levels of Th2 cells and increased Th2:Th17 ratio of CD4+ T in colonic mucosa compared with the mice treated with TNBS only (Figure 4). These results suggest that H. pylori might inhibit and promote the differentiation of Th17 and Th2 to attenuate the severity of TNBS-induced colitis, respectively. 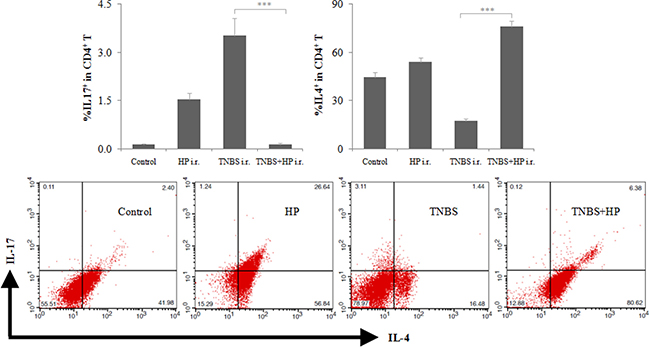 In further experiments concerning the protective mechanism by which H. pylori plays a protective role against CD, our data show that H. pylori enema can regulate the Th17, Th1 and Th2 lymphocyte responses to attenuate the severity of TNBS-induced colitis. We found that H. pylori not only down-regulated the Th17 cytokine expression and to a lesser extent, the Th1 cytokine expression, but also up-regulated Th2 cytokine expression in murine colonic mucosa. Moreover, H. pylori can increase the Th2:Th17 ratio of CD4+ T in murine colonic mucosa. These findings suggest that H. pylori might inhibit and promote the differentiation of Th17 and Th2 to attenuate the severity of TNBS-induced colitis, respectively.

Recent studies found that abnormal Th17 responses have vital roles in the pathogenesis of many chronic inflammatory diseases, including CD [16–19]. As the advances in understanding the function of Th17 cells, the Th1/Th2 paradigm has now been replaced by the new Th1/Th2/Th17 paradigm. Here we found that H. pylori can down-regulate Th17 profile and Th1 profile, but up-regulate Th2 profile. In addition, some studies found that the Th2 profile may be important in balancing the immune response [14, 20]. Therefore, it is feasible that H. pylori offers protective roles against CD by increasing Th2 profile to balance Th1/Th2/Th17 cell responses.

In summary, this is the first study to demonstrate that H. pylori attenuates TNBS-induced colitis mainly through increasing the Th2 cells in murine colonic mucosa. This finding is significant because it not only can offers a novel view on the role of H. pylori in regulating gastrointestinal immunity, but also may open a new avenue for development of therapeutic strategies in CD by making use of asymptomatic H. pylori colonization.

H pylori (NCTC11639 strain) obtained from Guangdong Provincial Key Laboratory of Gastroenterology of Nanfang Hospital were inoculated on Campylobacter-selective agar (BD Biosciences) supplemented with 5% sterile horse blood, 5 μg/ml rimethoprim, 10 μg/ml vancomycin and 10 μg/ml nystatin, and cultured at 37°C in a humidified microaerophilic atmosphere with 5% O2, 10% CO2 and 85% N2. After 2 days, the bacteria was resuspended and diluted with sterile 0.9% saline solution. The bacterial concentration was estimated by using a spectrophotometer (1 OD600 = 1 × 109 CFU/ml). The H pylori suspension at the concentration of 1 × 109 CFU/ml was used as the bacterial enema.

The experimental schedule is outlined in Supplementary Figure 1. For model 1, TNBS-induced colitis studies were performed as per the protocol described previously [15]. For model 2, these studies were performed as the model-1experiment, but 500 μl of H pylori enema was administrated into the mouse colonic lumen continuous 3 days after administration of 100 μl of TNBS solution. For models 3 and 4, these control studies only used saline and HP enemas, respectively. All harvested mice of models 1, 2, 3 and 4 were sacrificed and subsequently, their colons were intactly removed. The colons were longitudinally opened, cleaned and weighted after their length was measured. Since the distal 4–6 cm of the TNBS-treated colons were remarkably thickened and edematous, paraffin sections and total RNA isolation were taken from these regions. Paraffin sections were prepared for H&E to assess the degree of inflammation graded semi-quantitatively from 0 to 4 as previously described [21].

Total RNA was isolated from fresh colonic tissue using the RNAiso Plus (Takara Bio) and then cDNA synthesis was performed using the PrimeScript RT reagent Kit with gDNA Eraser (Takara Bio). Real-time PCR was performed in triplicate using the LightCycler 480 System (Roche). Each 20-μl PCR reaction contained 5 μl cDNA corresponding to 25 ng RNA as a template, 0.5 μM of each primer (Supplementary Table 1), and 1 × LightCycler 480 SYBR Green I Master (Roche). Samples were loaded into the LightCycler 480 Multiwell Plate 96 (Roche) and incubated for initial denaturation at 95°C for 10 min followed by 45 cycles, each cycle consisting of 95°C for 15 s, “touchdown” of –1°C/cycle from the start annealing temperature 65°C to the end 60°C for 5 s, and 72°C for 10 s. β-actin was used an internal standard, and ΔΔCT values were calculated to obtain fold changes relative to the control group.

F.Z. and G.T. conceived and designed the studies. Y.W. and G.T. performed the experiments. G.T. wrote the manuscript and prepared the table and figures. F.Z., G.T., Y.W. and F.W. reviewed the manuscript.