Gastric cancer is an important cancer type occurring in the upper digestive tract, and presents with high morbidity and mortality in China [1]. The extensive heterogeneity of this malignancy complicates the precise assessment of tumor aggressiveness and prognosis, complicating implementation of effective therapeutic strategies [2]. Thus, it is important to investigate the molecular mechanisms involved in the transformation and progression of gastric cancer. Additionally, there is a need to identify prognostic predictors and novel biomarkers that could predict certain patients benefitting from the targeted therapies.

Tissue factor (TF), a 47-kDa trans-membrane glycoprotein, is a cellular receptor for coagulation factor VII (FVII), activating a clotting cascade involved in many physio-pathological processes [3, 4]. It has been demonstrated that TF could be constitutively expressed by various extra-vascular cells and cancer cells [5]. TF could influence protease-activated receptor-dependent tumor cell behavior and regulate integrin function, leading to the intratumoral angiogenesis both in vitro and in vivo [6]. Our previous study demonstrated that the higher expression of TF in human esophageal cancer tissues significantly associated with tumor invasion and intratumoral angiogenesis, suggesting a positive role of TF in cancer progression [3]. Aberrant TF expression could be induced by a majority of oncogenic events, such as activation of K-Ras or epidermal growth factor receptor (EGFR), inactivation of p53 tumor suppressor, and loss of phosphatase and tensin homolog (PTEN) [7–9].

Besides its transmembrane form, TF also exhibits alternatively spliced transcripts. In 2003, Bogdanov et al. reported a novel alternatively-spliced human TF (asTF) in which exon 5 is deleted (as shown in Figure 1) [10]. The full-length TF (flTF) has six exons, and the asTF lacks exon 5, leading to a truncation of the transmembrane domain and a soluble form of TF [10]. Although lacking pro-coagulant activity, asTF could promote primary growth of human pancreatic cancer cells in vivo and augment tumor-associated angiogenesis [11, 12]. In this study, the transcripts of the two TF isoforms, flTF and asTF, in human gastric cancer tissues were assessed. These two transcripts in gastric cancer tissues and adjacent normal tissues were determined by real-time PCR. The correlation between the mRNA expression levels of TF isoforms and patient’s clinicopathological features was also analyzed. 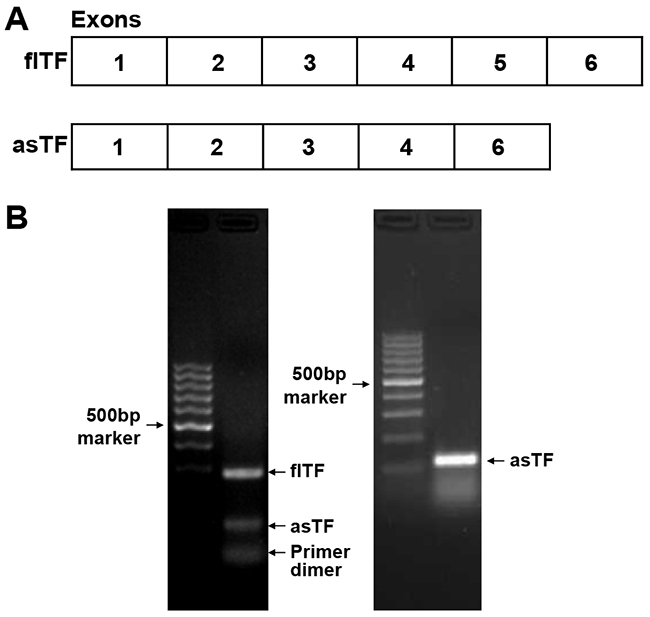 Table 1: Correlation between patients’ clinical parameters and the mRNA expression levels of flTF and asTF in human gastric cancer tissues 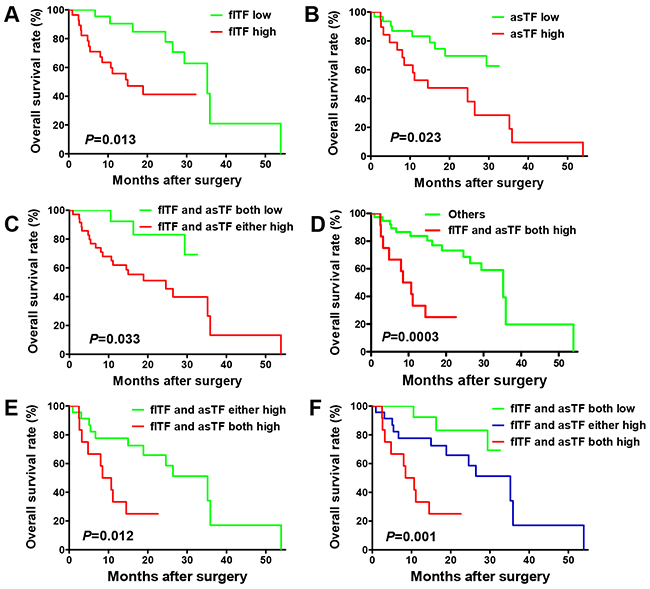 TF is an initiation factor regulating extrinsic coagulation and multiple physiological and pathological processes such as tumor angiogenesis, wound healing, intracellular signaling, and tumor metastasis [4]. It has been demonstrated that high TF expression could be found in many different tumor cells, such as pancreatic carcinoma, lung carcinoma, and colorectal carcinoma, as well as in vascular endothelial cell and interstitial macrophages of tumor tissues [13]. In addition, abnormal expression of TF is associated with cell growth, tumor invasiveness and metastasis, prognosis, and multi-drug resistance [14].

The open reading frame of human TF gene encodes 6 exons, with flTF containing all 6 exons. In 2003, a study by Bogdanov reported an alternatively spliced tissue factor (asTF) transcript in myeloid leukemia HL-60 cell through by selectively removing exon 5 [10]. In contrast to the flTF, asTF lacks a trans-membrane domain and contain unique amino acid sequence [10]. It has been demonstrated that asTF does not play a significant role during coagulation due to the truncation of the extracellular domain encoded by exon 5, but contributes to tumor-associated angiogenesis and cancer growth [11, 15–17]. A previous study suggested a paradigm for the role of flTF by interacting with FVIIa to affect angiogenesis through its cytoplasmic domain and PAR-2 activation [13]. However, unlike flTF, asTF does not affect angiogenesis via PAR-dependent pathways but relies on integrin ligation [18]. Currently, the role of flTF and asTF levels in human cancers remains elusive. Rollin et al. [19] demonstrated that the transcript level of asTF was an independent prognostic marker in NSCLC. Our data showed that both flTF and asTF were over-expressed on gastric cancer tissues, and their expression significantly associated with prognosis. We also analyzed the correlation between both flTF and asTF expression in gastric cancer and patients’ clinico-pathological characteristics such as gender, age, histologic grade, TNM stage, pathologic type. Except age, we found that flTF and asTF did not significantly associate with any clinical patient parameters.

Pre-mRNA splicing is an essential, ubiquitous, and precisely regulated process that occurs following gene transcription and before mRNA translation [20]. Alternative splicing can generate a variety of different transcripts from a single gene. Alternative splicing represents an important molecular mechanism of gene regulation in a series of physiological processes, including developmental programming, disease, and even cancer [21]. Many tumor-associated splice variants have clear diagnostic value and may serve as potential drug targets [22]. Thus, understanding the process of aberrant splicing and the detailed characterization of the splice variants may improve our understanding of malignant transformation targeting TF involved in gastric cancer progression and metastasis.

Table 4: Sequences of primers and probes

Gastric cancer tissues were collected from 52 patients who underwent surgical resection between January 2001 and April 2015 at our hospital (34 men and 18 women; median age at diagnosis, 58 years). No patients received pre-operative chemotherapy or radiotherapy. All gastric cancer tissues were confirmed as gastric adenocarcinoma by hematoxylin and eosin (H&E) staining after surgical resection, and cancer stages were assigned according to criteria established by the American Joint Committee on Cancer [24]. Moreover, 10 cases of adjacent normal tissues were analyzed as control samples. Detailed patient clinical parameters are shown in Table 1. The study protocol was approved by the ethics committee of the hospital.

All real-time PCR reactions were performed in the ABI 7500 (Applied Biosystem, USA) using a final volume of 20μl. Reactions were performed with 10μl of 2x TaqMan® Universal PCR Master Mix PCR buffer, 2μl of 5μM forward primer, 2μl of 5μM reverse primer, 2μl of 2.5μM TaqMan probe, 2μl template cDNA, and 2μl ddH2O. The primers and TaqMan probes used to identify flTF were adapted from Szotowki et al. [23]. The primers and TaqMan probes of asTF and the reference gene GAPDH were designed according to the National Center for Biotechnology Information (NCBI) database by using the Primer Primier 5.0 software (Palo Alto, CA, USA). The forward primer of asTF was located at the junction of exon 4 and exon 6, which is different from the design of the reference [23]. The sequences of all primers and TaqMan probes used in the present study were listed in Table 4. The cycling conditions for flTF and asTF were as follows: pre-denaturation at 50ºC for 2 min, initial denaturation at 95ºC for 10 min, followed by 40 cycles at 95ºC for 15 sec and 60ºC for 1 min, collecting the fluorescence signal at 60ºC. The data were normalized to GAPDH, and relative expression was calculated by the 2-ΔΔCT method.