Epidermal growth factor receptor (EGFR) mutations are common in lung adenocarcinoma (ADC) but rare in squamous cell carcinoma (SQC). The efficacy of EGFR-tyrosine kinase inhibitors (EGFR-TKIs) for SQC with EGFR mutations is unclear. The aim of this study was to evaluate the efficacy of EGFR-TKIs for these patients. We performed a retrospective matched-pair case-control study from 3 cancer centers, including 44 SQC and 44 ADC patients with EGFR mutation who were treated with EGFR-TKI. Subsequently, we performed a pooled analysis on the efficacy of EGFR-TKIs for EGFR-mutant SQC in 115 patients, including 71 patients selected from 25 published reports. In our multicenter study, EGFR-mutant SQC and ADC patients had similar objective response rate (ORR) (43.2% vs. 54.5%, p = 0.290), but SQC patients had lower disease control rate (DCR) (71.3% vs. 100%, p = 0.001), significant shorter median progression free survival (PFS) (5.1 vs. 13.0 months, p = 0.000) and median overall survival (OS) (17.2 vs. 23.6 months, p = 0.027). In pooled analysis, the ORR, DCR, PFS and OS of SQC patients were 39.1%, 71.3%, 5.6 months and 15.0 months, respectively. Performance status was the only independent predictor of PFS and erlotinib treatment was associated with a better survival. In conclusion, EGFR-TKI was less effective in EGFR-mutant SQC than in ADC but still has clinical benefit for SQC patients. Further study is need to evaluate the using of EGFR-TKIs in these SQC patients.

The percentage of EGFR mutations in lung squamous cell carcinoma (SQC) is only about 10% in persons of Asian descent [1] and < 5% in western countries [2]. Our literature review only identified small case series studies and case reports about the sensitivity of EGFR-TKI in SQC with EGFR mutation in the literature. The objective response rates (ORR), disease control rates (DCR) and median progression free survival rates (PFS) in these studies were 25.0–26.7%, 66.7–71.0% and 1.4–6.3 months, respectively [3–5]. EGFR-TKI seems to be less effective in SQC than in ADC and the role of EGFR-TKI in EGFR-mutant SQC remains to be debated.

We therefore performed a matched-pair case-control study retrospectively to investigate the different efficacy of EGFR-TKI in EGFR-mutant SQC and ADC patients from 3 cancer centers. Subsequently, a pooled analysis that included our own data and data obtained from previous studies at other institutions was carried out to evaluate the role of EGFR-TKIs in EGFR-mutant SQC, which represents the largest study to our knowledge of this patient cohort.

The initial matched-pair case-control study included 88 NSCLC patients from 3 cancer centers (44 SQC and 44 ADC). Among them, 52 patients were male, 46 patients were non-smokers and 62 patients had an Eastern Cooperative Oncology Group performance status (ECOG PS) of 0–1. The median age was 56 years (range: 32–80). Patient characteristics are shown in Table 1. Each group included 28 patients with a 19-DEL mutation, 15 with a L858R mutation and 1 with a G719X and S768I mutation simultaneously; 19 patients received EGFR-TKIs as first line treatment and 25 patients had prior chemotherapy; 26 patients received gefitinib, 14 received erlotinib, and 4 received icotinib. 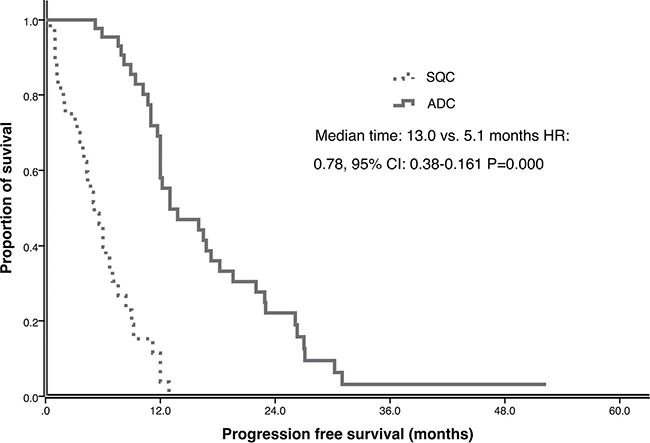 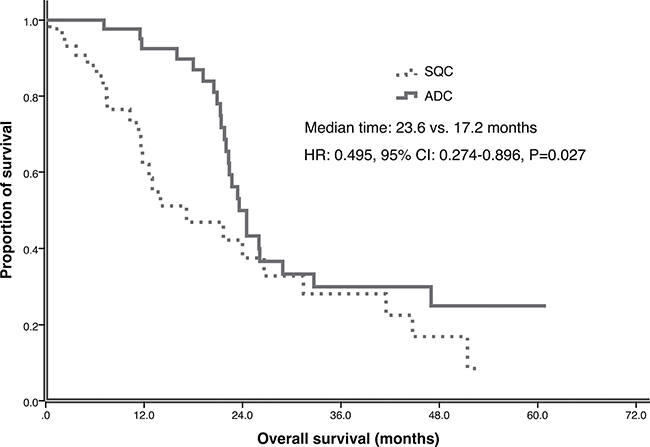 Table 3: Association between clinical factors and the PFS

Table 4: Association between clinical factors and the OS

In this study, we investigated the efficacy of EGFR-TKI treatment in lung SQC harboring EGFR mutation. We found that the ORR, DCR, PFS and OS of EGFR-mutated lung SQC treated with EGFR-TKI were 39.1%, 71.3%, 5.6 months and 15.0 months, respectively.

In our multicenter matched-pair case-control study, SQC patients had significant lower DCR, shorter PFS and OS than ADC patients. Although the mechanism behind the efficacy difference between ADC and SQC is unclear, there is now evidence from previous studies, including the TCGA study, revealing a number of genomic differences between ADC and SQC [30]. Gene amplifications of 3q including SOX2, TP63, PIK3CA, and EPHB3 were observed in as many as 86% of SQC samples but only 21% of adenocarcinoma samples [31]. Allelic losses [32] or hypermethylations [33] on the 3p region has been observed more frequently in tumors with a squamous histology compared with adenocarcinoma, involving some tumor suppressor genes such as RASSF1A, FUS1, VHL, and FHIT. Meanwhile activations of other signaling pathways, such as ERBB2 [34] and PIK3CA [35, 36] may mediate resistance of lung cancers to EGFR-targeting therapies. We theorize that multiple signaling pathways are activated in the development and progression of lung SQC, while ADC may depend on a key pathway, such as EGFR, ALK or ROS-1. Accordingly, the efficacy is inferior in SQC patients when therapy to block a single pathway is used. However, we feel that the utility of EGFR-TKI in SQC should be studied further.

We found that SQC patients treated with EGFR-TKI had the similar ORR to ADC patients. Approximately one third of the EGFR-mutant SQC patients obtained a PFS longer than 6 months and an OS longer than 1 year which may be due to the efficacy of EGFR-TKIs. Some EGFR-mutant SQC could benefit from EGFR-TKI treatment and EGFR-TKI is an important intervention for these patients. Further study is needed to identify these patients that may benefit.

This study is a retrospective multiple center and comprehensive review of the published literature. The validation of the results relies on higher level evidence, such as randomized controlled trials. Although this study includes all available data we identified in the literature, the sample size is still insufficient. Large sample studies would help generate more robust conclusions.

In conclusion, EGFR-TKI was less effective in EGFR-mutant SQC than in ADC but still has clinical benefit for some SQC patients. We present the largest pooled analysis to identify the clinical profiles of EGFR-TKI application for EGFR-mutant SQC, which may provide valuable information for treatment selection.

Tumor response was determined by the Response Evaluation Criteria in Solid Tumors (RECIST) version 1.1, including complete response (CR), partial response (PR), stable disease (SD), and progressive disease (PD). The treatment response was evaluated 1 month after the initiation of EGFR-TKI therapy and then every 2 months. This retrospective analysis was approved by the Institutional Review Board of the above stated hospitals and signed consent was obtained from each patient for the use of tissue in molecular analysis.

In order to further investigate the efficacy of EGFR-TKI for EGFR-mutant lung SQC, we performed a systematic search of the PUBMED database to identify all clinical trials and case reports that contained EGFR-mutant SQC patients treated with EGFR-TKI. The search strategy included articles from April 2004 to November 2015 indexed under the subject headings EGFR, mutation, and lung cancer. We did not restrict the search on the type of publication or periodical. All published reports that described the efficacy of EGFR-TKIs for EGFR-mutant SQC were selected. From the author’s publications, we extracted the data of the SQC patients. If the data important for us to analyze was not shown in the article, we wrote to the authors asking for help to obtain the data. 71 patients were identified by the above strategy.

PFS was calculated from the date of initiation of EGFR-TKIs to the time of disease progression. Overall survival (OS) was calculated from the time of beginning receiving EGFR-TKIs until the date of death. Survival curves were estimated by the Kaplan–Meier method and compared by the log–rank test. Multivariate analysis was performed using Cox regression test. Comparison of the qualitative data was done by Pearson χ2 or the Fisher exact test. P values < 0.05 was considered statistically significant. All statistical analyses were performed with SPSS 22.0.

All authors have declared no conflicts of interest.