miR-302a have been reported to participate in various physiological and pathological processes, however, a role for miR-302a in etoposide (VP-16) resistance of acute myeloid leukemia (AML) has not been reported. In this study, the aberrant expression of miR-302a was analyzed in patients with AML and in the AML HL-60 and U937 cell lines. Overexpression of miR-302a, by targeting the 3′UTR of Rad52, enhanced VP-16 sensitivity in the HL-60 and U937 cell. Accordingly, knockdown of Rad52 sensitized the HL-60 and U937 cells to VP-16-induced apoptosis and proliferation suppression. In addition, miR-302a enhanced the tumor-suppressive effect of VP-16 in a xenograft model of human HL-60 and U937 cell lines. Moreover, miR-302a repressed the AKT/Gsk3β/β-catenin pathway after Rad52 inhibition. Reintroduction of Rad52 reversed miR-302a-induced signaling suppression. The results of the present study demonstrated that miR-302a may be a target for the treatment of AML and a potential indicator of the therapeutic sensitivity of AML to VP-16.

Acute myeloid leukemia (AML) is the most prevalent adult leukemia in China. AML, considered as incurable, but now cured in approximately 35%–40% of patients [1]. For those >60 years old, the prognosis remains grim [2]. Chemotherapy is still considered one of the main therapies in AML treatment. Etoposide (VP-16) is an agent that targets DNA topoisomerase II and causes DNA single- and double-strand breaks [3, 4]. It has been widely used for the treatment of many types of cancers including AML [5, 6, 7]. Unfortunately, most patients who respond to primary chemotherapy later experience relapse. Therefore, identification of novel diagnostic markers and therapeutic targets is crucial.

MicroRNAs (miRNAs) are a class of non-coding RNAs composed of approximately 22 nucleotides which function primarily to regulate protein expression at post-transcriptional level by specifically binding to the 3’-untranslated region (3’-UTR) of mRNAs. A large number of studies have shown that miRNAs are involved in hematopoiesis and leukemogenesis and linked to the development of resistance against chemotherapy in many cancers [8, 9]. It has been reported that miR-302a involves in maintaining stemness of hESCs [10, 11, 12], suppressing tumor cell proliferation and inducing cancer cell apoptosis by directly targets Rad52 and AKT1 [13]. However, there is still little known about the potential role of miR-302a in VP16-based AML chemotherapy and further research is needed.

RAD52 was first identified in yeast and playing an important role in repair of DNA double-strand breaks at active transcription sites during the S phase of the cell cycle [14, 15]. The frequent microRNA-induced increase or deficiency of RAD52-mediated DNA repair due to microRNA binding alterations likely contributes to either the prevention or progression of breast, brain, or liver cancers [16].

In this study, the potential alterations in the expression pattern of miR-302a were evaluated in AML patient and in the AML cell lines. We found that overexpression of miR-320a led to elevated VP-16 sensitivity. We also identified the potential value of miR-302a in AML cell lines. The mechanism is direct regulation of RAD52 by miR-302a, leading to regulation of the intrinsic AKT/Gsk3β/β-catenin pathway in AML. miR-302a may serve as a therapeutic target or diagnostic/prognostic marker for leukemia therapy.

Reduced expression of miR-302a in AML patients and cell lines

In order to investigate potential alterations in the expression pattern of miR-302a in AML, the expression levels of miR-302a were measured by qRT-PCR in 20 patients with AML and in the AML HL-60 and U937 cell lines, then compared with the expression levels of miR-302a in 8 healthy volunteers. Interestingly, miR-302a was significantly down-regulated in leukemic cells in both primary AML samples and cell lines, as compared with that of MNCs (Mononuclear cells) isolated from the peripheral blood of healthy volunteers (Figure 1A). Next, we assessed the functional role of VP-16 in proliferation of the HL-60 and U937 cell lines. The growth inhibition curve was shown in Figure 1B and Figure 1C. 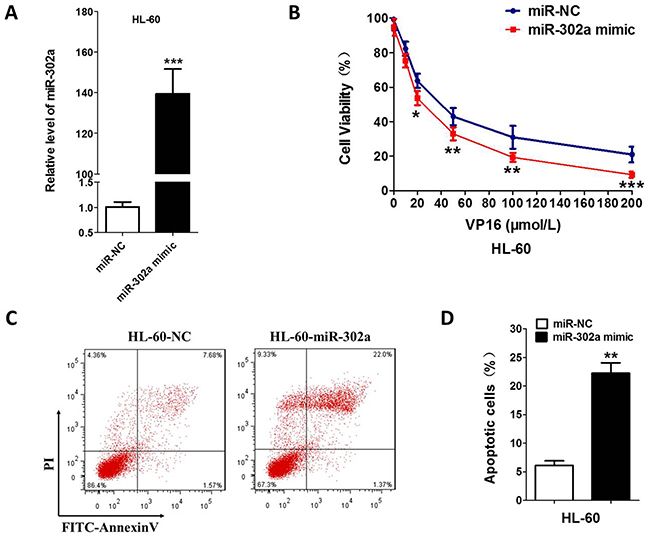 Figure 2: Overexpression of miR-302a enhances the sensitivity to VP-16 in HL-60 Cell. (A) HL-60 was transfected the miR-302a or negative control by Lipo2000. the expression level of miR-302a was measured by qRT-PCR. (B) compare to negative control, overexpression of miR-302a enhance the sensitivity to VP16 measured by MTT in HL-60. (C,D) cells were stained with PI and FITC-Annexin V, the percentage of apoptosis cell measured by flow cytometry. Each result represents the mean of three independent experiments.* P<0.05, ** P<0.01. *** P<0.001.

To search for the miR-302a target gene involved in VP-16 sensitivity, we used several bioinformatics methods to help identify the target human genes of miR-302a. Among the targets predicted by the search programs of TargetScan, miRanda and miRDB, we found Rad52 was the theoretical target gene of miR-302a (Figure 3A). RAD52 3’UTR contains the complementary binding sites of miR-302a and it was cloned into a luciferase reporter vector to evaluate the influence of miR-302a on the expression of a reporter gene using a luciferase assay (Figure 3B and Supplementary Figure 2). We found that the expression of the reporter gene in the recombinant plasmid containing RAD52 3’UTR was significantly attenuated in miR-302a-overexpressing cells and could be restored in miR-302a-mutant cells. To validate that miR-302a can directly bind to and regulate the levels of Rad52 mRNA through the predicted binding sites, we altered bases of Rad52 in the putative miR-302a binding site and found that the mutant 3’UTRs were completely refractory to miR-302a-mediated luciferase reporter repression in HL-60 cells (Figure 3C and Supplementary Figure 2). This result was confirmed by qRT-PCR and Western blot analysis (Figure 3D, 3E and Supplementary Figure 2). All these data suggested that Rad52 is a direct target of miR-302a. 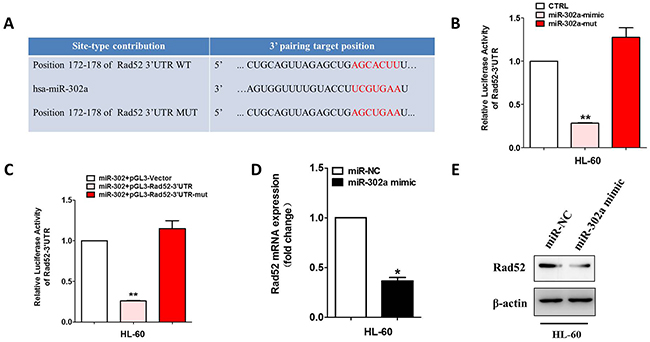 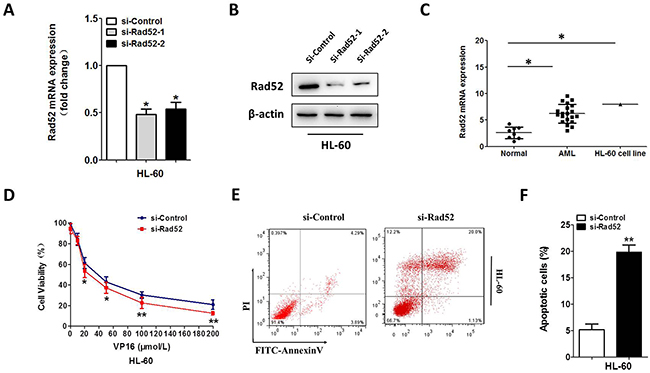 To evaluate the effect of miR-302a on the sensitivity of AML cells to a chemotherapeutic drug (VP-16) in vivo, HL-60 and U937 cells stably overexpressing MSCV vector or MSCV-miR-302a were injected into the right flanks of nude mice. When the tumors were palpable, the MSCV and miR-302a mice were subdivided into two groups and treated with either vehicle (water) or VP-16 (20 mg/kg). Notably, within 3 weeks of treatment, miR-302a mice that received VP-16 had pronounced inhibition of tumor growth compared to MSCV mice that received the agent or miR-302a mice that received the vehicle control (Figure 5A–5C and Supplementary Figure 4). This indicates that miR-302a enhances the tumor-suppressive effect of VP-16 in a xenograft model of human AML.

Downregulation of Rad52 by miR-302a suppresses cell proliferation and chemoresistance, in part by activating the AKT/Gsk-3β/β-catenin cascade

It is well known that miRNAs play vital role in various biological processes, including proliferation, cellular differentiation, signal transduction and carcino-genesis [17, 18, 19]. The data presented herein highlight the potential clinical utility of miR-302a levels as a valuable biomarker that reflects the expression of miR-302a in human AML samples. We found that miR-302a tuned-down both the proliferation and growth of AML cells. Here, in this research we identified for the first time that miR-302a exert effective functions on improving AML VP-16 sensitivity. The potential mechanism mediating these effects may be associated with the capacity of miR-302a to inhibit cell growth and induce cells apoptosis in HL-60 and U937 cells. To the best of our knowledge, this is the first study to demonstrate that miR-302a levels could be a valuable biomarker and an important prognostic factor for human AML. So far the precise mechanisms through which miRNAs get involved in AML VP-16 resistance remain unknown.

To investigate the underlying mechanisms by which miR-302a influence AML VP-16 sensitivity, we used bioinformatic methods to predict the possible target genes. As shown in Figure 3, Rad52 is the specific target of miR-302a. The Rad52 protein was a member homologous recombination (HR) and non-homologous end joining pathway that was important for DNA break repair and maintenance of genome integrity. VP-16 inhibited topoisomerase II activity to enhance cell apoptosis by making DNA break, Rad52 was a key protein in DNA break repair. As shown in Figures 4, 5 and Supplementary Figure 4, we prove downregulation of Rad52 increased VP-16 sensitivity of AML cell lines. As well, we found miR-302a sensitive AML cell lines to VP-16 in nude mice in vivo.

Bone marrow (BM) samples were obtained from 20 AML patients and 8 healthy donors at Huai’an first people’s hospital, Nanjing Medical University. Written informed consent was obtained from each patient, and the use of clinical specimens was approved by the Institutional Ethics Committee. Mononuclear cells were isolated from the bone marrow samples using density-gradient centrifugation with Ficoll-Paque Plus (Ficoll, Pharmacia LKB Biotechnology, NY, USA) and stored at −80°C.

The human AML cell line HL-60 was purchased from the China Center for Type Culture Collection (CCTCC). The HL-60 cell was cultured by IMDM (Hyclone, USA) supplemented with 20% fetal bovine serum (Gibco, USA) in a 37°C humidified incubator with 5% CO2.

The synthetic mimics of miR-302a along with scrambled oligonucleotides were purchased from Genepharma (Shanghai, China). SiRNAs of Rad52 and its negative control were synthesized by Genscript (Nanjing, China). Lipofectamine 2000 reagent (Invitrogen) was used to transfect cells with miRNAs or siRNAs at a final concentration of 50 nM according to the manufacturer’s protocol.

And the sequences of miRNA and siRNA were as follows:

Twenty nude mice (BALB/c-nu; 5 weeks old) were divided randomly into two cohorts and inoculated in the right flank with 2x 106 HL-60 cells that stably expressed MSCV vector or MSCV-miR-302a. Once palpable tumors formed, each cohort was treated with the VP-16 (20mg/kg). Treatments were administered intraperitoneally twice a week and tumors were measured every 3-4 days using a digital caliper. After 5 weeks of treatment, the mice were sacrificed humanely and the tumors were weighed. The animal protocol used in this study was reviewed and approved by the Huai’an first people’s hospital, Nanjing Medical University Animal Care and Use Committee for ethical procedures and scientific care.

This work was supported by Natural Science Foundation of Jiangsu Province (SBK2014020573).