Different breeds of swine are known to have predetermined propensities in certain areas, such as carcass composition and meat quality, which are associated with SC proliferation and differentiation [15–18]. Lantang pigs are native to Southern China and characterized by better meat quality and disease resistance compared with Landrace pigs. Our studies have shown that Lantang piglet SCs are more proliferative than Landrace piglet SCs, and the mTOR signaling pathway stimulates the SC proliferation [19]. In addition, the myofibers in Lantang piglets have a higher density but smaller cross-sectional area compared with Landrace piglets. Therefore, the different muscle characteristics might be related to the different features of skeletal muscle SCs, such as differentiation. To examine the relation between SC differentiation and muscle fiber traits, 1-day-old Lantang piglets and Landrace piglets were used to compare the SC differentiation capacity, as well as the mTOR pathway to investigate the molecular mechanisms. 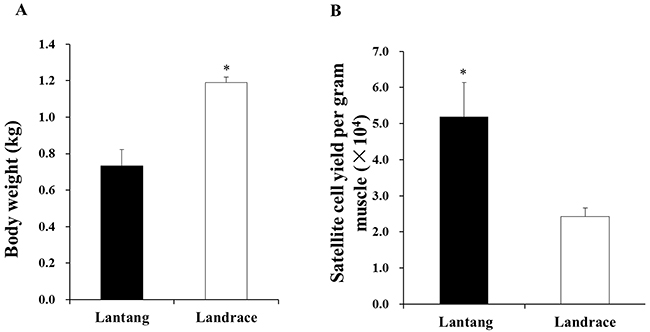 mRNA content of myogenin and MyHC I in longissimus dorsi muscle 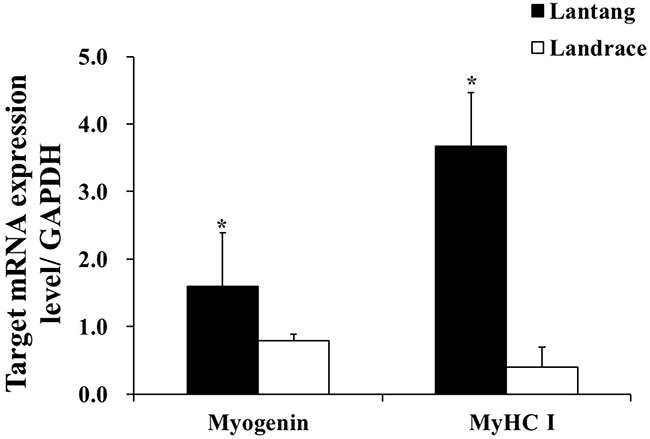 Creatine kinase activity and fusion index of SCs during differentiation 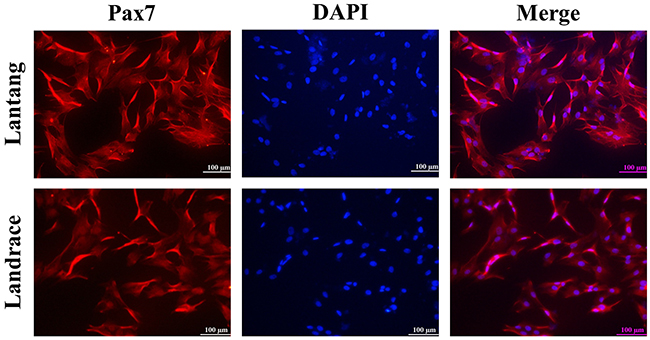 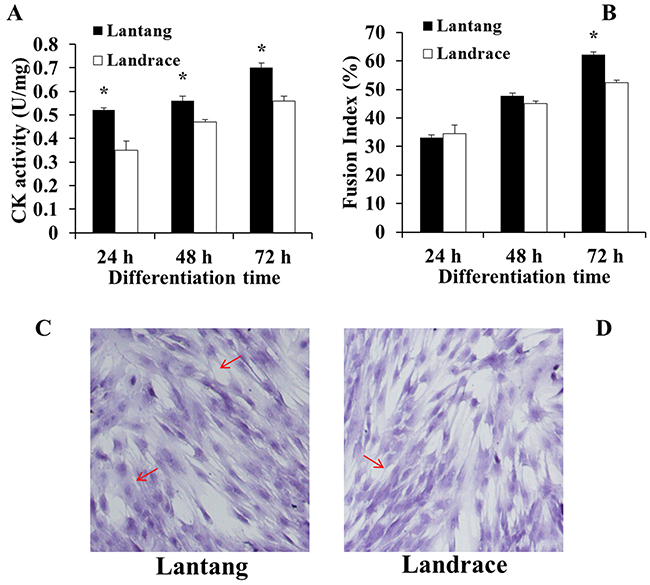 MRF4, myogenin, and MyHC protein content at 72 hours during differentiation

Figure 5: Protein levels of myogenic regulatory factor 4 (MRF4), myogenin, and myosin heavy chain I (MyHC I) in Lantang and Landrace satellite cells (SCs). Western blotting analyzed for MRF4, myogenin, MyHC I in satellite cells at 72 hours during differentiation (A). The values were normalized by β-actin expression (B). Values are mean ± SEM. Asterisk (*) indicates a significant difference (P < 0.05). 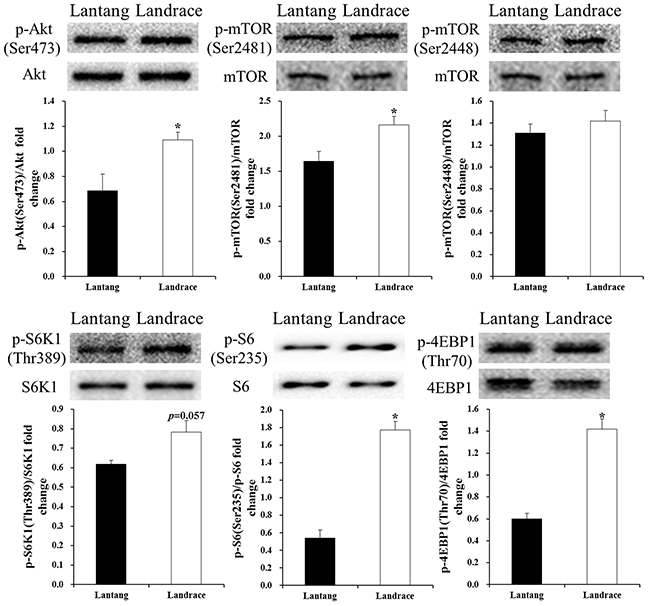 Muscle damage repair is influenced by myofiber growth, and the muscle fiber characteristics (fiber diameter and density) are inseparable from SC functions [18, 20]. Previous studies proved that SCs represent 2.5% to 6% of nuclei in one muscle fiber, indicating the importance of SCs for muscle fiber repair and hypertrophy [2, 4, 21]. A decrease in SC number can lead to muscle cachexia and atrophy [22]. Our present study showed that the yield of SCs from 1-day-old Lantang piglet longissimus dorsi muscle was higher than from Landrace piglets. Our previous study found that the density of muscle fiber in Lantang piglet longissimus dorsi muscle was higher than in Landrace piglets [19]. Therefore, we hypothesized that the higher number of SCs contributes to the higher density of muscle fibers, and the Lantang piglet SCs have a superior repair ability to that of Landrace piglet SCs when myofibers are damaged.

Previous studies suggest that the mTOR signaling pathway is crucial in cell growth, differentiation, and regeneration, and has long been recognized as a factor in skeletal muscle growth [32–34]. However, the exact function of the mTOR pathway in muscle cell differentiation and regeneration is ambiguous. Yoon and Chen [6] found that mTOR activation can promote phosphorylation of insulin receptor substrate-1 and suppress cell differentiation of mouse C2C12. Similarly, Ge et al [12] indicated that mTOR inhibits C2C12 myogenic differentiation by suppressing PI3K/Akt signaling. Moreover, Jayaraman and Marks [35] demonstrated that rapamycin, the mTOR kinase inhibitor, blocks proliferation and induces differentiation of BC1H1 mouse cells. Consistent with these previous studies, we found that the protein expression of p-Akt (Ser473), p-mTOR (Ser2481), p-S6K1 (Thr389), p-S6 (Ser 235/236), and p-4EBP1 (Thr70) in Lantang piglet SCs were lower than in Landrace piglet SCs, whereas the Lantang piglet SCs exhibited more myogenic differentiation compared with Landrace piglet SCs. Therefore, our findings and the above observations suggest that the mTOR signaling pathway has opposing functions in myogenic differentiation.

Lantang piglet SCs have a greater differentiation capacity than Landrace piglet SCs, leading to a different expression pattern of proteins on the mTOR signaling pathway. Thus, mTOR kinase might be utilized to stimulate muscle differentiation and regeneration.

This study was conducted with the approval and in accordance with the directives of the Institutional Animal Care and Use Committee of South China Agricultural University (Guangzhou, China).

Six 1-day-old male Lantang piglets (BW: 0.73±0.09 kg) and six 1-day-old Landrace male piglets (BW: 1.19±0.03 kg) were used in this study. The piglets were euthanized with sodium pentobarbital before sampling. Longissimus dorsi muscle was used to isolate SCs. Additional muscle samples were taken and frozen in liquid nitrogen immediately, and then stored at –80° C until analysis.

Cells were counted by use of a hemocytometer according to the method of Zhu et al [41]. Cell yield was calculated by comparing the total number of cells with the wet weight of the muscle samples.

For myogenic differentiation, SCs were cultured in six-well plates at greater densities (2.6 × 105 cells/cm2) to adjust for the different proliferation. Once attached to the plate (85% to 90% confluence), cultures were induced to differentiate by use of differentiation medium (DM) containing 2% horse serum. DM was changed every 24 hours for 72 hours. After the addition of the DM, three randomly selected plates were rinsed three times with cold sterile 1× phosphate buffered saline (PBS) and fixed at 4° C with 4% paraformaldehyde every 24 hours over a 3-day period. We analyzed cells morphologically by hematoxylin and eosin (H&E) staining. Fifteen randomly selected fields were enumerated for total and fused nuclei. Fused nuclei were defined as any two or more nuclei within a continuous membrane-defined myotube. The percentage of myonuclei contained in myotubes, as indicated by the fusion index, was calculated.

Every 24 hours to 72 hours of differentiation, cell culture plates were removed from the incubator, rinsed three times with cold sterile 1 × PBS and immediately lysed in ice-cold lysis buffer. Lysates were centrifuged at 13,000 × g for 15 minutes at 4° C, the supernatants were collected, and the protein content of the samples were measured by use of Bicinchoninic Acid Protein Assay Kit (BCA, Thermo Fisher Scientific, San Jose, CA, USA). CK activity was measured by Autobiochemical Analyzer (SYSMEX, Kobe, Japan) according to the manufacturer’s instructions. Specific CK activity was calculated by normalizing to total protein content, and differentiation was determined by measuring the muscle-specific CK activity.

SCs were washed for three times with cold PBS, and then lysed on ice with lysis buffer (BioTeke, Beijing, China). Subsequently, the samples were centrifuged at 12,000× g for 5 minutes at 4° C to remove insoluble debris. The supernatants were used for the experiments, and the protein concentrations were determined by use of the BCA method (Thermo Fisher Scientific, San Jose, USA). Samples mixed with an electrophoresis sample buffer were boiled for 10 minutes at 100° C.

An equal amount of protein was electrophoresed on a 10% SDS polyacrylamide gel in a tris-glycine running buffer. After the electrophoresis was completed, all the proteins were transferred to polyvinylidene difluoride membranes (Bio-Rad Laboratories, Hercules, CA, USA) at 100 V for 75 minutes by use of a transfer buffer. The membranes were blocked with 5% BSA in tris-buffer saline for 2.5 hours at room temperature, and then incubated overnight at 4° C with primary antibodies. After incubation with the first antibody and extensive washing, membranes were incubated with the appropriate horseradish peroxidase-labeled second antibody for 1.5 hours at 26° C. Proteins reacting with the first antibody were visualized with the ECL-Plus Western blotting reagent in a FluorChem M system (Cell Biosciences, San Leandro, CA, USA). Band density was analyzed by Image J (http://rsb.info.nih.gov/ij/).

Data are expressed as the means ± SE. Student’s t-test was conducted to determine differences between two groups by use of SAS (Version 9.2; SAS Institute Inc., Cary, NC). The asterisk (*) indicates a significant difference (P < 0.05). The results are representative of three separate experiments.

The authors thank Ruilin Yang for her help with the preparation of the manuscript.