Several studies have reported an association between vascular endothelial growth factor (VEGF) gene polymorphisms rs2010963, rs3025039 and rs699947 and renal cell carcinoma (RCC). However, the results remain inconclusive and controversial. We therefore conducted a meta-analysis to evaluate this association. Electronic databases were searched for relevant case-control studies up to November 2016. RevMan 5.2 software and STATA version 12.0 were used for statistical analysis in our meta-analysis. Heterogeneity was assessed using the I2 value. Nine eligible studies were retrieved for detailed evaluation. The pooled estimates indicated that the GG genotype of VEGF rs2010963 polymorphism significantly decreased RCC risk [GG vs. GC+CC; GG vs. GC]. There was also a significant association between VEGF rs3025039 polymorphism and RCC susceptibility [CC+CT vs. TT; CC vs. TT]. Furthermore, a significant association between VEGF rs699947 polymorphism and RCC susceptibility was detected [A vs. C; AA+AC vs. CC; AA vs. AC+CC; AA vs. CC; AA vs. AC; AC vs. CC]. Subgroup analysis revealed that these associations held true especially for Asians. Our meta-analysis suggested that there may be a relationship between the VEGF rs2010963, rs3025039 and rs699947 polymorphisms and RCC susceptibility.

Renal cell carcinoma (RCC) has around 350,000 newly diagnosed cases every year and is one of the most common histologic types of kidney cancer. At the same time, the mortality of RCC is more than 140,000 per year worldwide [1, 2]. However, to date, the definite etiology of RCC is still not well defined. Several epidemiologic studies showed that the etiology of RCC is a complex interaction between environmental and multigenetic factors. Tobacco exposure [3], obesity [4] and hypertension [5] are accepted major risk factors for RCC. Recent molecular studies have reported that abnormal expression of VEGF contribute to tumorigenesis [6].

The VEGF gene is located on chromosome 6p21.3 and consists of 8 exons [7]. It plays a critical role in physiological and pathological angiogenesis which is a relatively early event in tumor development, progression and metastasis [8, 9]. Previous studies observed that functional single-nucleotide polymorphisms (SNPs) in either the regulatory or coding sequence of VEGF affects gene expression in various diseases including lung cancer [10], cardiovascular disease [11] and gastric cancer [12]. Some of VEGF SNPs, such as rs2010963 polymorphism (+405G/C, also named as -634G/C) in the 5’-untranslated region, rs3025039 polymorphism (+936C/T) in the 3’-UTR of the gene and rs699947 polymorphism (-2578C/A) in the promoter region have been suspected to correlate with RCC risk [13-17].

Recently, a series of case-control studies focusing on the associations between gene mutations (particularly SNPs) and the risk of RCC have been extensively studied [18-21]. However the results have been inconsistent. We conducted the present systematic review and meta-analysis to better understand the effects of VEGF rs2010963, rs3025039 and rs699947 polymorphisms on RCC susceptibility. 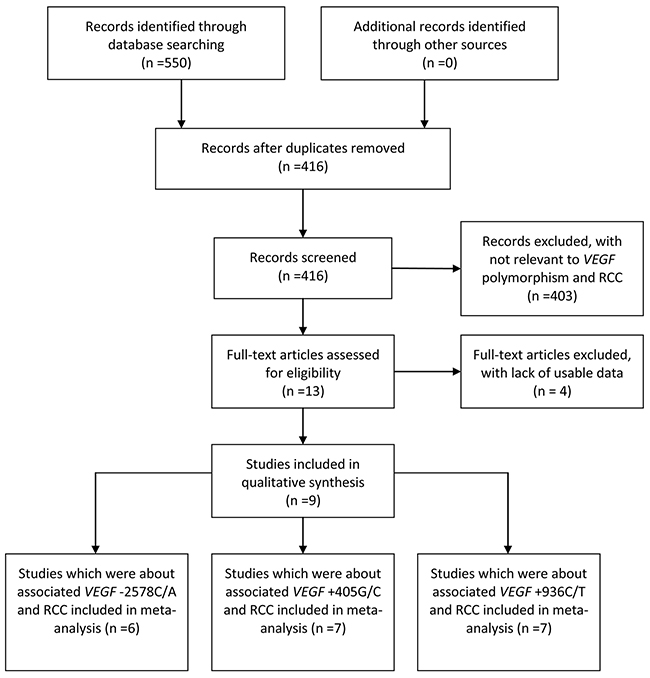 Table 1: Characteristics of studies on VEGF polymorphisms and RCC risk included in the meta-analysis

* represent the genotype distribution of control sample was not meeting Hardy-Weinberg equilibrium. 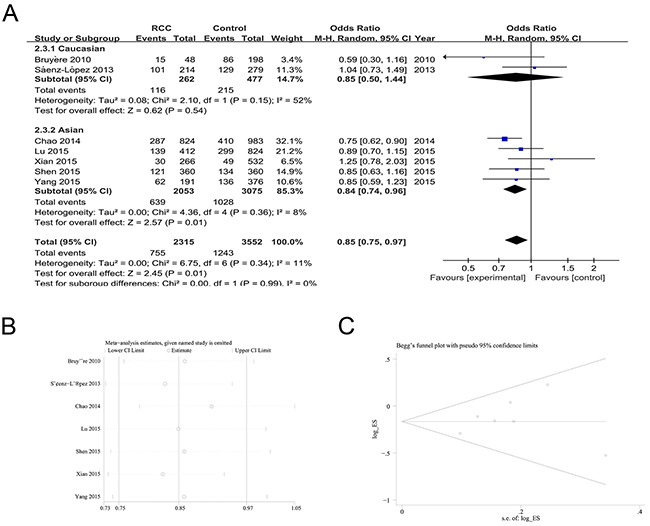 Figure 2: The association of rs2010963 polymorphism with RCC susceptibility in the GG vs. GC+CC model. (A) ORs and 95%CIs. (B) Sensitivity analysis. (C) Publication bias. 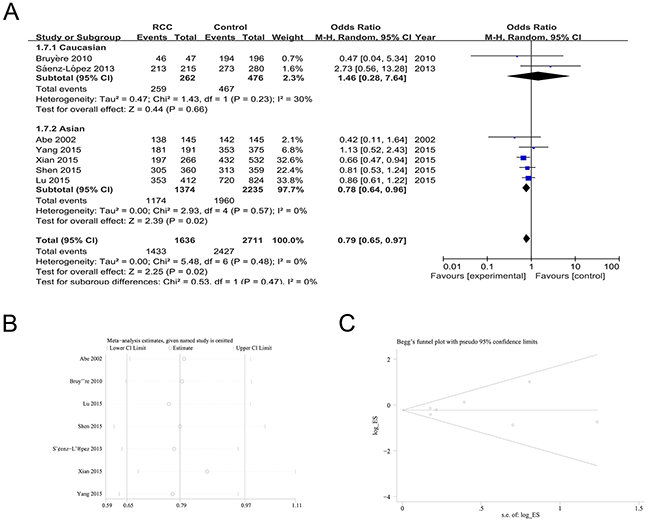 Figure 3: The association of rs3025039 polymorphism with RCC susceptibility in the CC+CT vs. TT model. (A) ORs and 95%CIs. (B) Sensitivity analysis. (C) Publication bias. 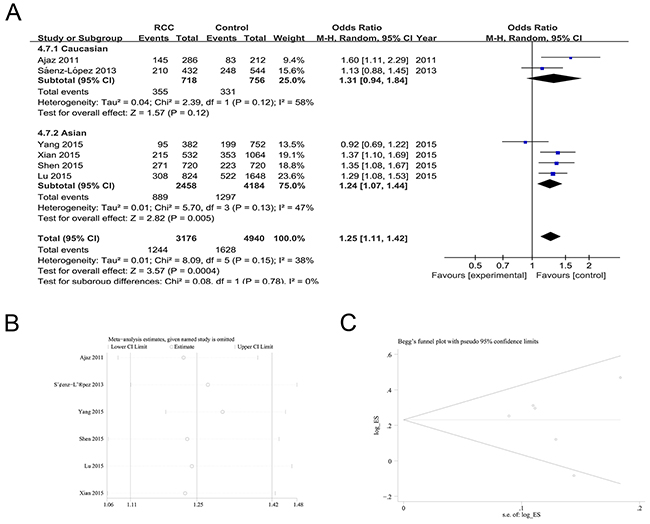 Figure 4: The association of rs699947 polymorphism with RCC susceptibility in the A allele vs. C allele model. (A) ORs and 95%CIs. (B) Sensitivity analysis. (C) Publication bias.

Angiogenesis, the generation of new capillary from basal vessels under both physiological and pathological conditions, is a relatively early event in tumor growth and metastasis [8, 22]. VEGF, a common pro-angiogenic growth factor, is associated with angiogenesis in multiple kinds of tumor including breast [23], colorectal [24] and kidney cancer [6]. A previous meta-analysis conducted by Gong et al. reported that VEGF gene rs699947 polymorphism and rs3025039 polymorphism correlates with an increased susceptibility of RCC [25]. However, this meta-analysis mistakenly treated VEGF gene SNP +405G/C and -634G/C, two aliases of rs2010963, as different polymorphisms. Furthermore, this study did not reveal the influence and heterogeneity from the including studies which were diverse in ethnicity. Another study by Yang et al stated that there was no significant association between VEGF gene polymorphisms and RCC risk [26].

This meta-analysis also investigated the association between VEGF rs3025039 polymorphism and susceptibility to RCC. In our analysis, the results revealed that the CC genotype and CC+CT genotype were significantly associated with a decreased risk for RCC when compared with the TT genotype. However, in the subgroup analyses that excluded two studies not meeting the HWE there was no significant association. When including the studies that met the HWE status and were carried out in the Asian population, the CC+CT genotype of rs3025039 polymorphism showed a marginal significant correlation with a decreased risk of RCC when compared to those carrying the TT genotypes. In 2016, Gong et al conducted a meta-analysis and found that most genetic models and alleles displayed high susceptibility to RCC when regarding the VEGF rs3025039 polymorphism [25]. However, their study did not take in to account the heterogeneity of the included studies which were diverse in ethnicity or did not meet the HWE. We conducted a more comprehensive and cautious meta-analysis including seven eligible studies and only using random-effects models. Moreover, our subgroup analysis was based on HWE status and the Asian population. As a result we found a suspicious association which was different from the study by Gong et al. Therefore, the association between VEGF rs3025039 polymorphism and RCC needs to be validated further.

For VEGF rs699947 polymorphism, we also conducted an updated meta-analysis including six eligible studies. The pooled estimate found an increased risk for RCC in the A-carrier genotypes of VEGF rs699947 polymorphism. Our results confirmed the findings of two previous meta-analyses [25, 28]. Furthermore, subgroup analysis found that the AA genotype of rs699947 polymorphism was associated with an increased RCC susceptibility in the Asian population when compared with those carrying the CC or AC+CC genotype. Our findings indicate that the VEGF GG genotype of rs2010963 polymorphism decreased RCC susceptibility, especially in the Asian population. Moreover, the TT genotype of rs3025039 and AA genotype of rs699947 polymorphism were associated with an increased RCC susceptibility. For ethnicity variation, the possible reason may be most of our included studies were conducted in Asian and small sample size of studies conducted in Caucasian could lead to the discrepancy. When tested by sensitivity analysis, Begg’s rank correlation method and Egger’s weighted regression method, the results from the three SNP in VEGF did not identify any significant heterogeneity and/or publication bias.

This meta-analysis has several limitations. First, the number of studies and the sample size of the three VEGF polymorphisms were relatively small. As the individual information about the genotypes of the three VEGF polymorphisms was not sufficient, more clinical trials with larger sample size are required to address this issue. Second, only published studies were used for analysis in this study. Therefore, there might be publication bias even through tested by Begg’s and Egger’s method. Third, in this meta-analysis heterogeneity was detected, among the studies, which could influence the results. While the random-effects model would provide more conservative estimates with wider confidence intervals, we only used the random-effects model to calculate the pooled OR [29]. Even so, potential heterogeneity attributed by differences in ethnicity, design of the study, genotyping method, and limited sample size might not be discovered. Finally, because of insufficient individual participant data, the relationship between the haplotype of multiple VEGF polymorphisms, gene-gene and gene-environment interactions could not be estimated. If detailed information would have been available, this meta-analysis could offer more convincing evidence.

In conclusion, our meta-analysis suggests that three SNP (rs2010963, rs3025039 and rs699947) in VEGF are associated with RCC susceptibility especially in the Asian population. These SNPs in VEGF may be biomarkers for clinical evaluation. Nevertheless, additional well-designed studies including larger sample size and different ethnic groups are needed for re-evaluation of these associations.

PubMed, Institute for Scientific Information (ISI), Wangfang, Google Scholar, and Chinese National Knowledge Infrastructure (CNKI) databases were searched for all articles describing an association between the VEGF polymorphisms and RCC risk up to November 2016. The key words used were “VEGF”, “renal cancer/renal cell carcinoma”, and “polymorphism/variant”. The electronic search was supplemented by checking reference lists. All of the original studies had to meet the following criteria: (1) case-control design; (2) evaluate the association between the VEGF polymorphisms and RCC risk; (3) provide sufficient data for estimating an odds ratio (OR) with a 95% confidence interval (95% CI).

Two of the authors extracted all data independently following the selection criteria. The following details were collected from each study: first author’s name, publication year, country of study, ethnicity, number of cases and controls, genotyping method, and OR.

The methodological quality of each study was assessed by the Newcastle-Ottawa Scale (NOS), which uses total NOS scores (range from 0 to 9) to judge the quality of all included studies. Studies with seven or more points were considered to be of high quality.

The OR with 95%CI was used to assess the association between the VEGF polymorphisms and RCC based on the genotype frequencies in cases and controls. For each VEGF polymorphism, the meta-analysis examined the genetic susceptibility in 5 genetic models, including allelic, homozygote, heterozygote, dominant model, and recessive model. The heterogeneity among the studies was checked by using the I2 value. The pooled OR was calculated for each study using only the random-effects model, considering the random-effects model is more conservative and will provide better estimates with wider confidence intervals [29]. Subgroup analyses were conducted based on the classification of the population and HWE status. Sensitivity analyses were conducted to identify the influence from single studies to the pooled estimate. Publication bias was assessed by Egger’s linear regression [30] and Begg’s funnel plots [31]. Quantitative synthesis analysis was performed using RevMan 5.2 software (Cochrane IMS) and STATA version 12.0 (Stata Corporation, College Station, TX, USA).