Human colorectal cancer (CRC) is one of the most common fatal malignancies worldwide. A large amount of evidence has demonstrated that tumor microenvironment (TME) linked closely with the initiation, promotion, and progression of CRC via diverse mechanisms such as stimulating angiogenesis and immune suppression [1]. Immune cells are the core components of the TME [2]. Regulatory T cells (Tregs) are considered to be a key mediator in subverting antitumor immune responses and subsequently promote tumor progression.

The transcription factor forkhead box P3 (FoxP3), an intracellular key molecule for Tregs development and function [3], is considered to represent the most specific Treg cell marker so far [4]. Recent studies have demonstrated that increased proportion of tumor-infiltrating FoxP3+ Tregs predict a poor prognosis of patients with cancer, including breast [5], ovarian [6], hepatocellular [7] and gastric carcinomas [8]. However, in human CRC, high density of tumor-infiltrating FoxP3+ Tregs was shown to associate with worse survival in several studies, [9, 10] while some other studies reported opposite results [11, 12]. Thus, a deep understanding is warranted. Moreover, the potential of FoxP3+ Tregs as an effective index in prognostic prediction and targeted immunotherapy is necessary to be explored.

Here, we performed this meta-analysis to test overall survival (OS) and disease-free survival (DFS) as outcomes in human CRC with known FoxP3+ Tregs density according to the compartment within tumor they invade. The aim of this study was to quantitatively summarize the association between high FoxP3+ Tregs infiltration and clinical outcomes in human CRC, and thereby provided more evidence on the clinical value of FoxP3+ Tregs as a prognostic index and immunotherapeutic target for human CRC.

Search results and description of studies

Literature searches yield total 1612 records and the results are shown in Figure 1. 17 studies including 3811 patients were identified for the assessment of intratumoral FoxP3+ Tregs density [12–28]. All the studies were evaluated by the Newcastle–Ottawa Scale (NOS), and were in accordance with the inclusion criteria and suitable for data consolidation. Characteristics of included studies for OS, DFS (or RFS) and clinicopathological features such as TNM stage were shown in Table 1 and Supplementary Table 1 respectively. 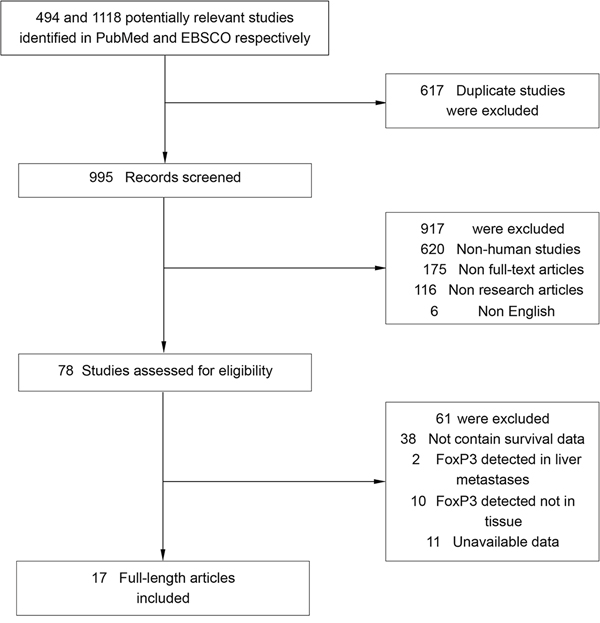 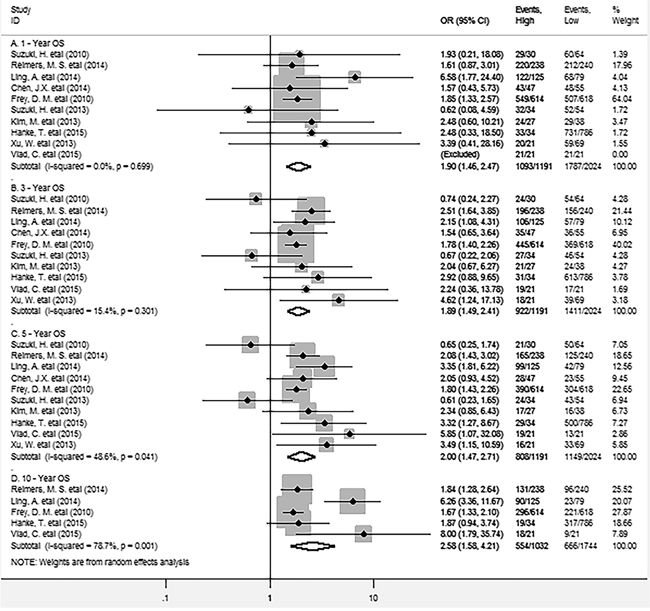 Figure 2: Forest plots describing OR of the association between FoxP3+ Tregs infiltrating into both stroma and intraepithelium and OS at 1, 3, 5 and 10-year. 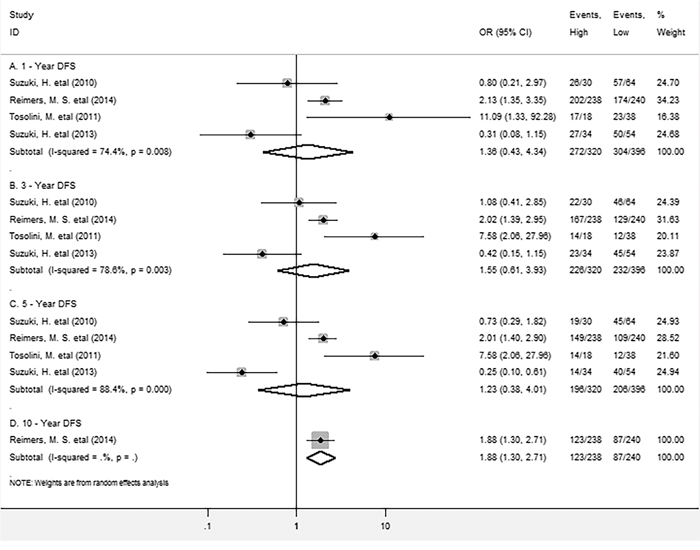 Figure 3: Forest plots describing OR of the association between FoxP3+ Tregs infiltrating into both stroma and intraepithelium and DFS at 1, 3, 5 and 10-year. 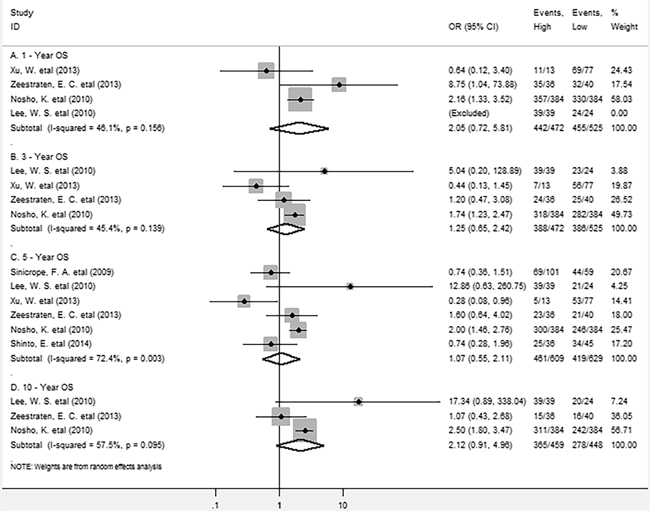 Figure 4: Forest plots describing OR of the association between intraepithelial FoxP3+ Tregs and OS at 1, 3, 5 and 10-year. 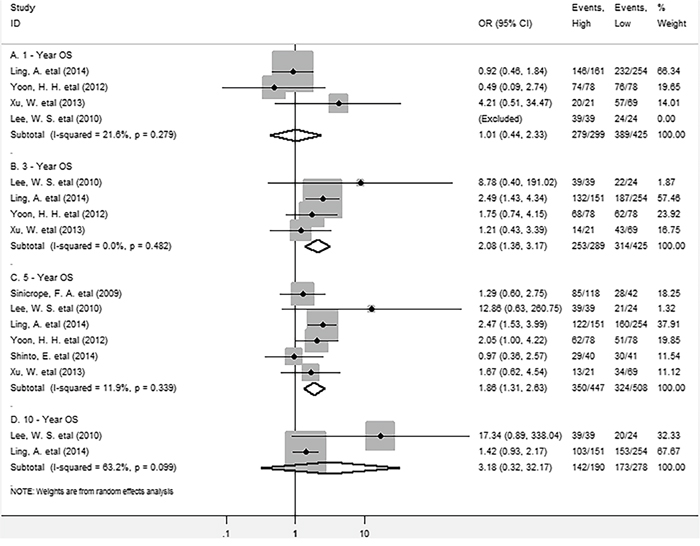 Figure 5: Forest plots describing OR of the association between stromal FoxP3+ Tregs and OS at 1, 3, 5 and 10-year.

Sensitivity analyses were used to determine the influence of individual studies on the overall OR. As a result, the plot showed that all the individual studies had no important impact on the results for 1, 3, 5 or 10-year OS, which correlating with FoxP3+ Tregs both in stroma and intraepithelium within tumor (Supplementary Figure 4). 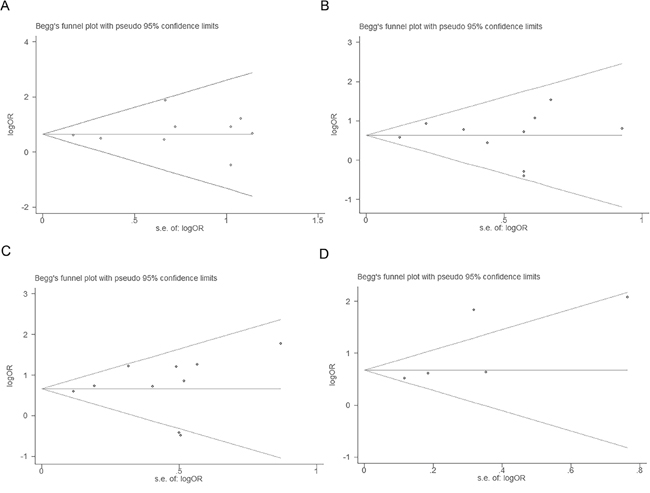 FoxP3+ Tregs are highly enriched in the TME and are considered to be a pivotal mediator of immune suppression, therefore facilitating tumor progression [31-32]. However, FoxP3+ Tregs shows its anti-tumor effect in several cancers. Previous meta-analyses reported that increased tumor-infiltrating FoxP3+ Tregs improved OS in human CRC [29, 30]. However, the studies included in these meta-analyses only reported the data on FoxP3+ Tregs either from stroma, intraepithelium or both sites. Thus, the results were not accurate even wrong when they were from the combinations of all these studies.

In this meta-analysis, we found FoxP3+ Tregs invading both stroma and intraepithelium within tumor were significantly positively correlated with 1, 3, 5 and 10-year OS, but not with 1, 3, 5 or 10-year DFS in CRC. In addition, FoxP3+ Tregs infiltration was significantly inversely associated with TNM stage of CRC. Interestingly, FoxP3+ Tregs infiltrating into different sites (intraepithelium or stroma) seemed to predict differential clinical outcomes as stated above, implicating FoxP3+ Tregs may have distinct roles depending upon their localization. The possible explanation was that FoxP3+ Tregs in stroma mainly inhibited the inflammatory anti-microbial response which facilitating tumor progression; whereas FoxP3+ Tregs in intraepithelium may inhibit anti-tumor immunity and promote tumor immune evasion maybe through the direct contact with tumor cells. We believe that our study provides significative statistical evidence to unravel the differential prognostic value of FoxP3+ Tregs in different locations in human CRC for the first time.

Several limitations should be noted from this meta-analysis. First, we can’t get pooled result as there is only one study included in some analyses. Second, significant heterogeneity observed across studies in some analyses can’t be completely accounted despite the use of random-effect models. Third, morphometric analysis for FoxP3+ Tregs used in included studies are not inconsistent. Finally, studies with negative results or small sample size may not be published, which can cause publication bias.

In conclusion, high density of FoxP3+ Tregs within tumor especially at stromal compartment leads to a favorable clinical outcome of CRC, implicating FoxP3+ Tregs are one of potential indexes for prognostic prediction and agonists through promoting FoxP3+ Tregs generation may be promising in immunotherapy for human CRC.

We searched PubMed and EBSCO for studies assessing the density of FoxP3+ Tregs in tumor tissue and survival in CRC patients from 1996 to October 2016. The searching keywords were (“regulatory T cells” OR “Tregs” OR “FoxP3”) AND (“colorectal”) AND (“neoplasms” OR “cancer” OR “tumor” OR “carcinoma”). A total of 494 and 1118 entries were identified in PubMed and EBSCO respectively.

We excluded studies that were not published as full texts, including commentary, conference abstracts and letters to editors, studies that not report sufficient data to estimate survival rates; studies that evaluated FoxP3+ Tregs with Flow Cytometry (FCM) or real-time reverse transcription polymerase chain reaction (RT-PCR), detected FoxP3+ Tregs in metastases and not in tumor tissues.

OS and DFS (or RFS) are the endpoints used in this meta-analysis. OS was recorded as the primary endpoint, and the second endpoint was DFS (or RFS). Cut-offs of FoxP3+ Tregs density defined by individual studies classified CRC patients into high- and low- groups.

The studies included in the meta-analysis were cohort studies. The quality of each included study was assessed using Newcastle–Ottawa Scale (NOS) by two independent authors [33]. The studies with 6 scores or more were regarded as high quality studies. A consensus NOS score for each item was achieved.

Extracted data were combined into a meta-analysis using STATA 12.0 analysis software (Stata Corporation, College Station, TX, USA). Statistical heterogeneity was assessed using the chi-squared based Q-test or the I2 method [34]. Data were combined according to the random-effect model in the presence of high heterogeneity [35], otherwise, the fixed-effect model was performed [36]. Sensitivity analysis was employed to assess the influence of each study on the pooled result. Begg’s funnel plot and Egger’s test [37] were calculated to investigate potential publication bias. All P values were two-sided and less than 0.05 are considered statistically significant.

We thank all the members of the departments who helped in this study.

15. Chen J, Chen Z. The effect of immune microenvironment on the progression and prognosis of colorectal cancer. Medical oncology. 2014; 31:82.

33. Stang A. Critical evaluation of the Newcastle-Ottawa scale for the assessment of the quality of nonrandomized studies in meta-analyses. European journal of epidemiology. 2010; 25:603-605.