Colon carcinoma is a common gastrointestinal cancer in clinic. In China, it ranks the 3rd and 5th position in terms of incidence and mortality, respectively. China has witnessed an increasing prevalence of colon carcinoma since 1980s, by 38.56% in 15 years [1]. Because of atypical early symptoms, colon carcinoma is usually associated with a high misdiagnosis rate, high malignancy, delayed diagnosis and easy metastasis. The five-year survival of early-stage colon carcinoma is about 90% [2], in contrast to 7% for advanced colon carcinoma [3].

At present, an integrated treatment consisting of biotherapy and traditional Chinese medicine is gaining popularity for cancers. Constant efforts are made to find out the reason for the low 5-year survival rate in colon carcinoma. Steward first proposed the concept of tumor stem cell (TSC) in 1994, which was considered as the root cause of tumor development, metastasis, recurrence and resistance to chemotherapy and radiotherapy due to its infinite self-renewal and differentiation potential. Since then, many studies were devoted to TSC and to develop tumor immunotherapy. Dendritic cells (DCs) are the most powerful antigen-presenting cells that can activate initial T cells and specific immune response and facilitate non-specific cytotoxic killing. They are important antigen carriers in anti-tumor immunity. Cytokine-induced killer cells (CIK) are potent killers of tumor cells. With rapid in vitro proliferation and broad-spectrum killing effects, CIK cells are sensitive to drug-resistant tumor cells and considered ideal immunocompetent cells.

Huaier is a type of medicinal fungus that contains over 18 amino acids and different minerals. It can be used to enhance immunity and inhibit tumor cell growth [5]. Colon carcinoma was induced in nude mice by transplanting with HT-29 colon carcinoma cell line. Huaier Granule was combined with DC-CIK to treat tumor in nude mice and the treatment efficacy was observed. To discuss the mechanism, expressions of key genes in the signaling pathway were detected.

Nodules were formed at 4-5 d after inoculation of 1×105 CD133+ HT29 colon carcinoma cells into the nude mice. The transplanted tumors grew rapidly with clear margins and hard texture. The tumors were harvested and covered with yellow envelop (Figure 1A). Pathological examination of the tumor tissues indicated that it was moderately differentiated colon adenocarcinoma (Figure 1B). 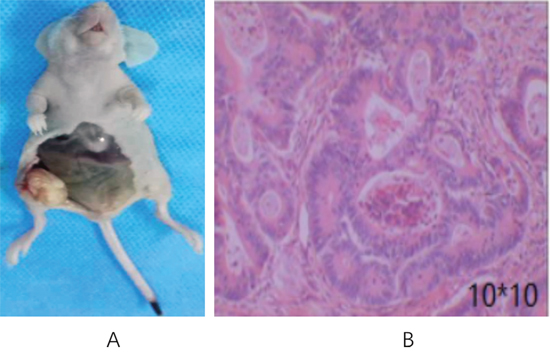 Morphology and immunophenotyping of DC-CIK cells

DC progenitors were harvested 2 hours after adherence of peripheral blood mononuclear cells to the wall. The adherent cells were round. At 5d of culture, dendrites were seen on the cell surface (Figure 2). At the early stage of culture, CIK cells were round and the morphology was uniform. They were co-cultured with DCs at 8d. As more cells proliferated over time, the cell morphology became irregular and large suspending colonies appeared (Figure 2). 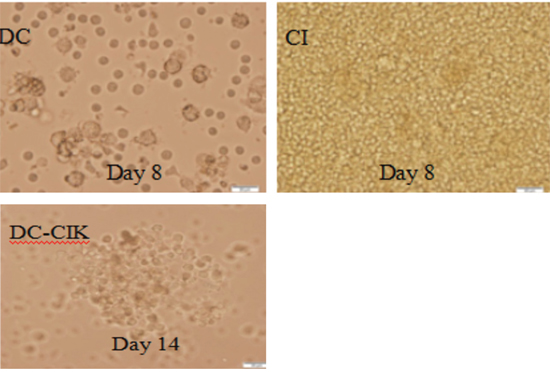 Figure 2: Morphology of DC-CIK cells under the light microscope (magnification 400×). 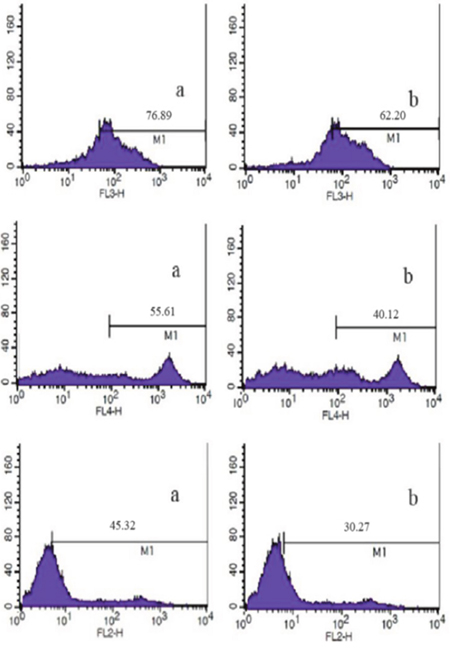 Nude mice in combined treatment group, DC-CIK group and Huaier Granule group remained emotionally stable throughout the course of treatment. In contrast, the nude mice in blank control group were dispirited with reduction in body weight. Mobility was restricted starting from the third week and the nude mice were on the verge of dying. At the end of treatment, nude mice in combined treatment group, DC-CIL group and Huaier Granule group gained weight steadily, whereas the body weight of nude mice in the blank control group declined slightly (Figure 5A and 5B). 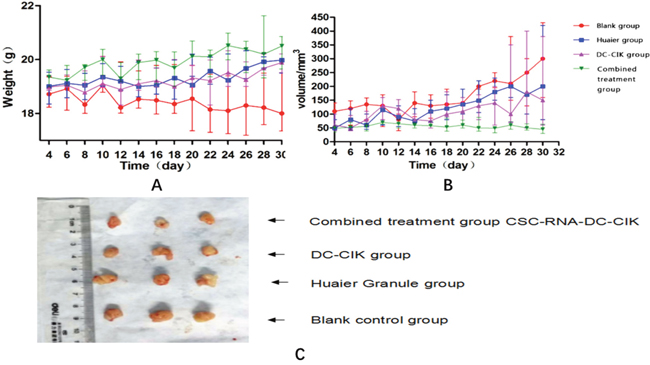 Influence of different treatments on expressions of key genes 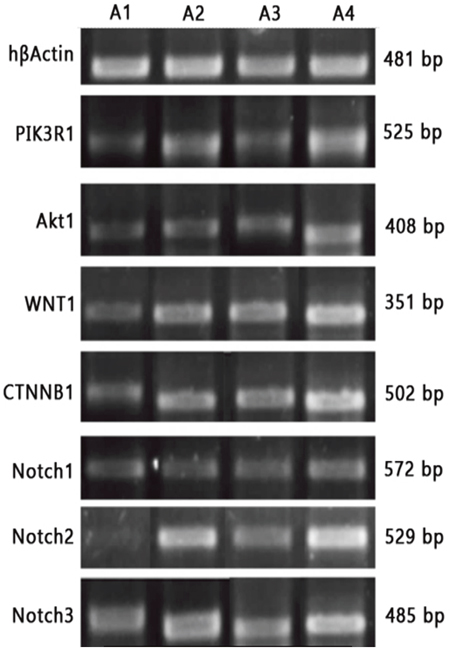 DC, the most important antigen-presenting cell, can recognize and present antigens specific to tumor stem cells. So DC can be used for targeted therapy of cancers. Provenge® immunotherapy utilizing DC has achieved desired effect against melanoma in clinic [6]. CIK cells are immune effector cells, predominantly CD3+CD56+T cells, produced by PBMC under the stimuli from many cytokines (CD3McAb, IL-2, IFN-γ and IL-1α) [7]. Zhou et al. [8] induced DCs, CIK cells and LAK cells as effector cells using human mononuclear cells, which were then applied to in vitro killing test on colon carcinoma SW480 cells. Result showed that the killing effect of DC-CIK cells on colon carcinoma SW480 cells was stronger than LAK-DC, CIK or LAK cells alone.

Huaier Granule contains over 18 amino acids and a diversity of minerals. It has been now used to treat cancers by enhancing immunity and inhibiting cancer growth [5, 9].

Huaier Granule combined with DC-CIK cells was applied to tumor-bearing nude mice transplanted with HT-29 colon carcinoma cells. In vivo killing test showed that the nude mice in the combined treatment group, DC-CIL group and Huaier Granule group remained emotionally stable with normal water and food intake and no restriction to mobility. This indicated that immunotherapy and Huaier Granule had no adverse or toxic effects.

The development, proliferation and differentiation of tumor stem cells are related to several signaling pathways, such as Wnt/β-catenin, Wnt, Notch, HOX and Bmi-1 pathways [9, 10]. As compared with the blank control group, mRNA expression of PI3KR1, Akt, Wnt1, CTNNB1, Notch1, Notch2 and Notch3 were downregulated significantly in combined treatment group, DC-CIK group and Huaier Granule group. As compared with DC-CIK group and Huaier Granule group, the combined treatment group also showed a significant downregulation of the above genes.

To conclude, combined treatment is more powerful in killing tumor stem cells than either DC-CIK or Huaier Granule alone. This sheds new light onto the treatment of colon carcinoma.

HT29 colon carcinoma cells were grown in DMEM and cultured at 37°C in a humidified incubator (5% CO2/95% air). Half of the culture medium was replaced every 2 days, and cell passage was performed when the cells grew to 80% confluency.

Preparation and identification of CIK cells

Culture of CIK cells: From healthy subject 50 ml of white blood cells was collected. Non-adherent cells were harvested and added into 1640 medium containing 10% FBS and 50 ng/mL IFN-γ. Then 500 U/ml IL-2, 5 ng/ml IL-1α and 50 ng/ml CD3 antibody were added 24 h later and half of the culture medium was replaced every 2-3 days. CIK cells and DC-CIK cells were collected at 8d and 14d, respectively, and counted. Cells positive for CD3, CD56 and CD8 antibodies were analyzed on a flow cytometer.

Preparation and identification of DCs

Culture of DCs: From healthy subject 50 ml of white blood cells was collected. Non-adherent cells were harvested and grown in 1640 medium containing 10% FBS, IL-4 and 1 000 U/ml GM-CSF. DCs were harvested at 8d of culture and those positive for CD40, CD80, HLA-DR and CD86 antibodies were detected using a flow cytometer.

Twenty Balb/c nude mice were acclimatized for 1 week. The above-mentioned HT29 colon carcinoma cells positive for CD133+ were adjusted to the concentration of 1×105/ml. The cells were mixed evenly with serum-free medium and matrigel matrix at 1:1 proportion. Using a microinjector, 0.2 ml of the cells was inoculated to the right axilla of nude mice. Tumor formation was observed every 2 days. Appearance of hard nodules in the axilla indicated that the tumor was successfully induced.

Tumors were harvested and cut into about 2 mm thickness along the maximum diameter. Tissues were fixed in neutral formalin, embedded in paraffin, sliced and subjected to HE staining.

RT-PCR detection of key genes related to the signaling pathway

SPSS 10.0 software was used for statistical analysis. Measurement data were expressed as mean ± standard deviation (). To compare the means within and across the groups, ANOVA were performed. For further intergroup comparisons, Bonferroni correction was used. P<0.05 was considered significant difference.