The amyloid precursor like protein-1 (APLP1) is a member of the amyloid precursor protein (APP) family in mammals. While many studies have been focused on the pathologic role of APP in Alzheimer’s disease, the physiological functions of APLP1 have remained largely elusive. Here we report that ectopic expression of APLP1 in Drosophila induces cell migration, which is suppressed by the loss of JNK signaling and enhanced by the gain of JNK signaling. APLP1 activates JNK signaling through phosphorylation of JNK, which up-regulates the expression of matrix metalloproteinase MMP1 required for basement membranes degradation and promotes actin remodeling essential for cell migration. Our data thus provide the first in vivo evidence for a cell-autonomous role of APLP1 protein in migration.

Amyloid precursor-like protein 1 (APLP1) is a member of the highly conserved amyloid precursor protein family that includes amyloid precursor protein (APP) and amyloid precursor-like protein 2 (APLP2) in mammals [1–4]. Members of this family are type I integral membrane proteins that contain a single transmembrane domain with a large N-terminal extracellular domain and a short C-terminal intracellular domain (AICD) [5]. While APP has been studied extensively as the precursor of amyloid beta (Aβ) peptides implicated in the pathogenesis of Alzheimer’s disease (AD) [6], the physiological functions of APP have yet to be fully elucidated. Previous studies have suggested a role of APP in neurogenesis [7, 8], neurite outgrowth [9–12], axonal pruning [13], synapse formation and function [14–16], cargo transport along the axon [17–20], cell death [21] and cell fate determination [22].

APP family proteins have also been implicated in neuronal migration, yet this function has been controversial. It was originally reported that neurons in APP/APLP1/APLP2 triple knockout mice over-migrated and accumulated in the marginal zone [23], suggesting that APP family proteins negatively regulate neuronal migration. Yet, APP triple knockout neurons differentiated from APP triple knockout embryonic stem (ES) cells have unaltered migratory capacities both in vivo and in vitro [24], and down-regulation of APLP2 in APP/APLP1 double knock mice did not affect the migration of cortical neurons [25]. RNAi knock-down of APP in the developing cortex blocked the migration of neurons from the intermediate zone to the cortical plate [26], suggesting a positive role of APP in neuronal migration. However, this phenotype was not resulted from a general defect in cell motility, rather, a specific defect in the interaction between APP ectodomain and the extracellular factors, such as pancortins were detected [27]. Furthermore, cultured CHO cells overexpressing APLP2 exhibited an enhanced migratory response to fibronnectin and type IV collagen through increased adhesion to these extracellular molecules [28]. Together, these studies suggest that APP and APLP2 are required for cell adhesion with extracellular factors, yet a direct role of APP family proteins in promoting cell migration has not been documented.

Though APP family proteins have conserved structure and could compensate for each other to certain extent in double and triple knockout mice [23], APLP1 likely carries out distinct physiological functions from APP and APLP2. First, APLP1 is mainly localized to the cell surface, whereas APP and APLP2 are mostly found in intracellular compartments [29]. Second, APLP1, but not APP and APLP2, interacts in trans and is involved in cell-cell contacts [29]. Third, APLP1 does not undergo the same type of regulated processing as APP and APLP2 [30]. Despite a few studies on the processing and expression of APLP1, the functions of APLP1 remain largely unknown. APLP1 is reported to be a p53 transcriptional target that modulates stress-induced apoptosis [31], and is up-regulated in neuroendocrine tumors of the gastrointestinal tract [32].

The c-Jun N-terminal Kinase (JNK) pathway is evolutionarily conserved from Drosophila to human, and regulates a wide range of cellular activities including proliferation, differentiation, migration and apoptosis [33]. Recently, JNK pathway was shown to play important roles in modulating Src-induced cell migration [34] and Aβ induced cell death in Drosophila [35, 36]. However, a functional connection between JNK and APLP1 has not been established.

Drosophila has been used as an animal model to study the in vivo function of APP, for the genetics of Drosophila is clear and Drosophila is easy to manipulate. In Drosophila, there is also an APP-like protein, APPL, indicating the role of APPL may be conserved from Drosophila to human. In this report, we investigate the function of APLP1 in Drosophila. We found that expression of APLP1 in Drosophila wing disc triggers cell migration, which is suppressed by the loss of JNK signaling and enhanced by the gain of JNK signaling. APLP1 activates JNK signaling through phosphorylation of JNK, which results in elevated expression of JNK target genes including puc and mmp1, and actin polymerization. Thus, this work provides the first evidence that APLP1 promotes JNK-dependent cell migration in vivo.

To investigate the physiological functions of APLP1 in development, we adopted the Gal4/UAS system to express APLP1 in various tissues in Drosophila. Interestingly, expression of APLP1 along the anterior/posterior (A/P) compartment boundary in third-instar wing discs under the control of patched-Gal4 (Figures 1a and 1a’), a driver commonly used to study cell migration behavior in Drosophila [37, 38], produced cell migration phenotype. The green fluorescent protein (GFP) labeled cells are detached from the A/P compartment boundary and migrates toward the posterior part of the wing discs (Figures 1b and 1b’). This phenotype was further enhanced by adding another copy of UAS-APLP1 (Figures 1c and 1c’), as the number of discs showing strong migration was increased from 63% to 84% (Figure 1e). 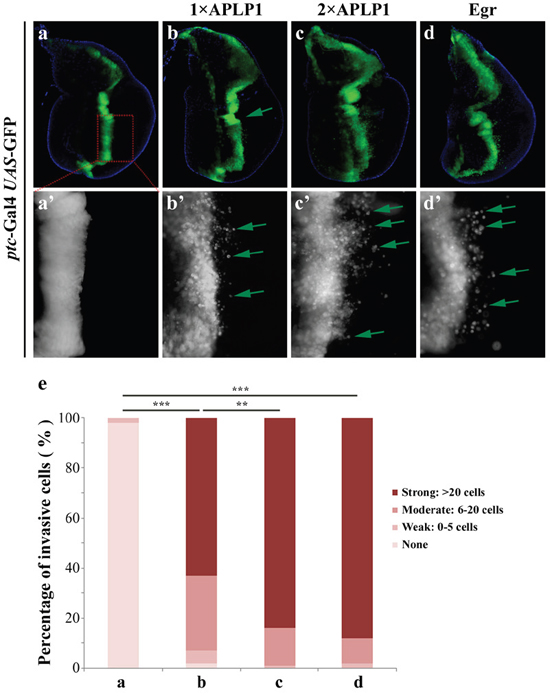 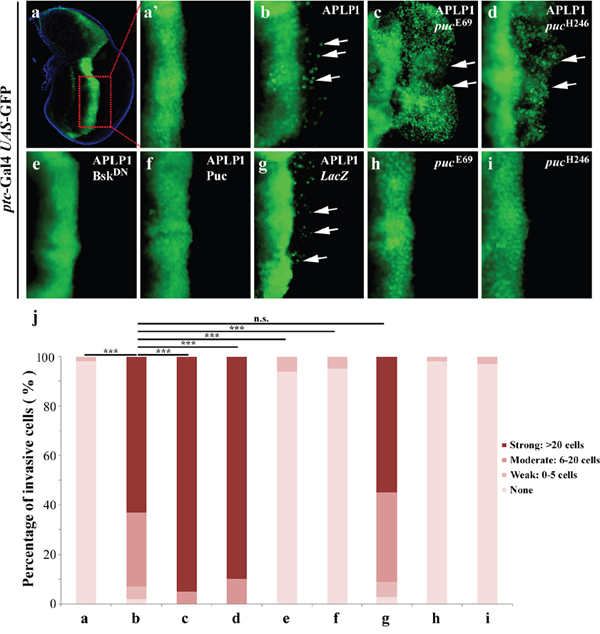 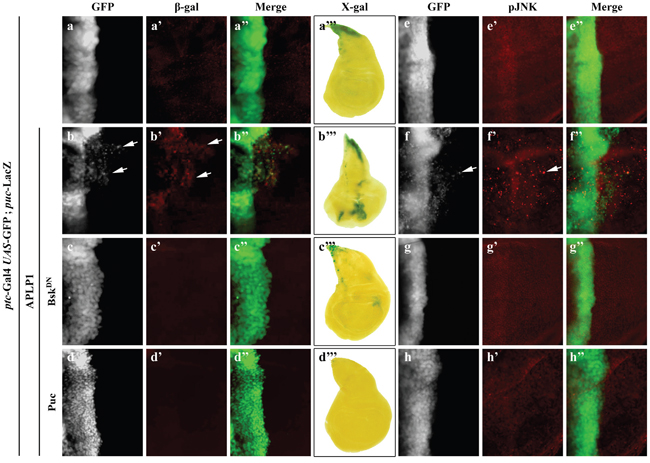 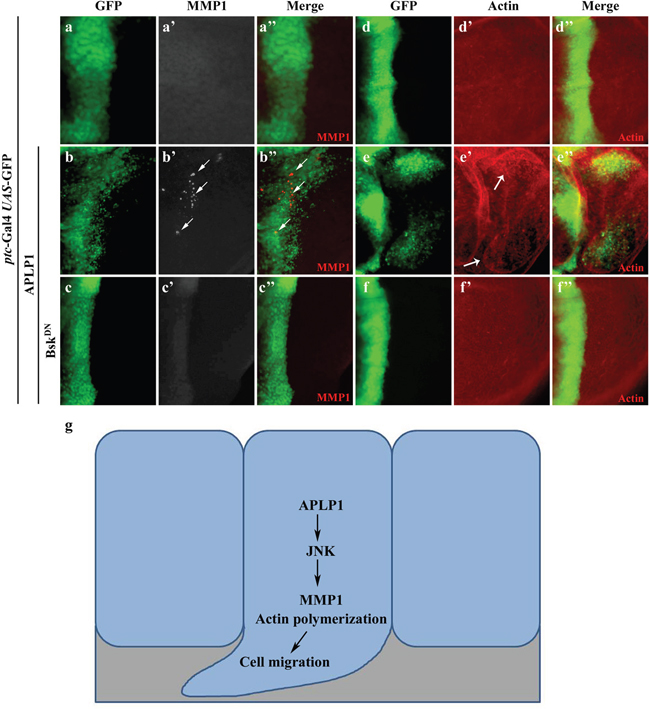 Consistent with our findings, APLP1 has been found to be significantly up-regulated in several types of human cancers including invasive ductal breast carcinoma (https://tcga-data.nci.nih.gov/docs/publications/tcga/) and lung carcinoid tumor [68] (Figure 5a and 5b). In addition, based on the outlier analysis from the Oncomine database (https://www.oncomine.org/), many more cancers, including Esophageal cancer, Ovarian cancer, Sarcoma, and Kidney cancer, have a portion of samples showing significantly higher expression of APLP1 in multiple studies, suggesting APLP1 may play an important role in some subtypes of cancers during tumorigenesis. Finally, higher APLP1 expression was observed in more advanced stages in lung cancer [69] (Figure 5c), implying a role of APLP1 in tumor metastasis.

Figure 5: APLP1 is up-regulated in certain types of human cancer, and its higher expression may be correlated with more advanced stages in lung cancer. The following data analysis all came from Oncomine database: (a) TCGA Breast cancer data showed that APLP1 expression was significantly up-regulated in invasive ductal breast carcinoma compared to the normal control. Fold change=2; P value=1.03E-31; (b) In Bhattacharjee Lung study, APLP1 expression was up-regulated significantly in lung carcinoid tumor compared to the normal control. Fold change=53.5; P value=2.01E-8; (c) In Selamat Lung study, outlier analysis at 75th percentile was performed for APLP1 expression. APLP1 expression increased markedly from stages IA to IB and IIA above 75th percentile. Sample size for stages IIB and IV was too small to be considered. COPA=1.791.

For statistical analysis of cell migration, 20-30 3rd instar larvae were dissected for each genotype as described [53]. Discs were separated to different categories based on the number of cells migrated to the posterior compartments.

For X-gal staining, 3rd instar larvae wing discs were dissected in PBST and stained for β galactosidase activity as described [72].

We thank Dr. Gunter Merdes and the Bloomington stock centers for fly stocks. We apologize to researchers we have not cited due to space limitations. This research was supported by the Fundamental Research Funds for the Central Universities (2000219125) to Xingjun Wang and supported by National Basic Research Program of China (973 Program) (2011CB943903), National Natural Science Foundation of China (31171413 and 31371490), the Ph.D. Programs Foundation of Ministry of Education of China (20120072110023 and 20120072120030), and Shanghai Committee of Science and Technology (09DZ2260100 and 14JC1406000) to L. X. This research was also supported by Scientific and Technological Research Project of Higher Education of Hebei Province (QN2017118) to Chenxi Wu.