The prognostic value of long non coding RNAs in cervical cancer: A meta-analysis

Cervical cancer is one of the most common malignancies in women worldwide. Numerous literatures demonstrate that aberrantly expressed lncRNAs are involved in tumorigenesis and development, and may have the potential to be prognostic markers. However, their prognostic functions in cervical remain controversial. Therefore, we performed this meta-analysis to evaluate the prognostic significance of lncRNAs in cervical cancer. We searched databases to identify relevant articles. Pooled hazard ratios (HRs) and 95% confidence intervals (CIs) were calculated. 15 studies involving 1868 patients with cervical cancer and 12 lncRNAs were included. Our results indicated that the levels of lncRNAs were associated with the overall survival ((HR = 1.56, 95%CI = 1.02–2.38, P < 0.001, random-effect) and event free survival (HR = 1.33, 95%CI = 0.77–2.28, P < 0.01, random-effect). High HOTAIR expression was associated with shorter overall survival in cervical cancer (HR = 3.93, 95% CI = 2.34–6.62, P < 0.001, fixed-effect). In conclusion, our meta-analysis suggested that lncRNAs may serve as novel predictive factors for prognosis of cervical and high expression HOTAIR was associated with shorter overall survival in cervical cancer.

Long noncoding RNA (lncRNA) are a kind of non-coding transcripts longer than 200 nucleotides [4]. LncRNAs can regulate various biological processes, such as gene expression, transcription, and cellular proliferation, through epigenetic silencing, mRNA splicing, and lncRNA-microRNA interaction [5, 6]. Furthermore, by comparing their expression of tumors and normal cells, lncRNAs are abnormally expressed in the various tumors, functioning as oncogenes or tumor suppressors [7, 8]. Recent studies have shown that lncRNAs also play important role in cervical cancer, including occurrence, progression, metastasis and prognosis [9, 10]. However, due to the sample size and research programs, singe study may be inaccurate and insufficient. With the aim to obtain a better understanding of the prognostic value of lncRNAs in patients with cervical cancer, we performed a meta-analysis to explore the prognostic value of lncRNAs through larger sample size of patients.

As shown in Figure 1, we searched 191 articles in the databases. After screening the titles and abstracts, 29 full-text articles were assessed for eligibility. Then because of no usable data or incomplete data, 14 papers were excluded. As a result, a total of 15 articles were the current meta-analysis [11–25]. 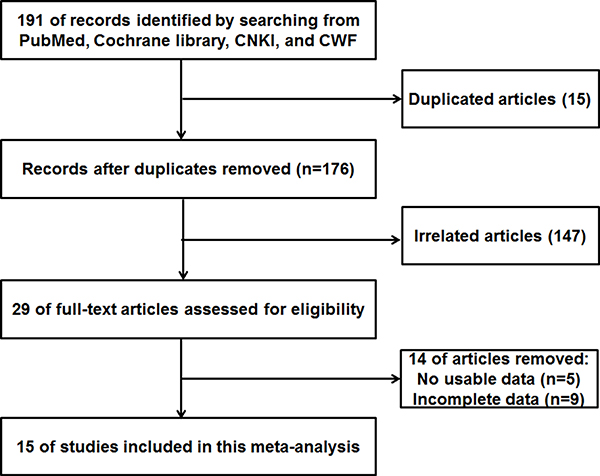 Figure 1: The flow diagram indicated the process of study selection.

The basic information and data from the included studies are shown in Table 1 and Table 2. 15 studies enrolling 1868 participants, with a maximum sample size of 218 and a minimum sample size of 49 patients. Among these 15 studies, 14 focused on Asians and 1 evaluated Caucasians. 9 studies reported patient overall survival (OS), 2 focused on OS as well as disease free survival (DFS), and 5 investigated OS as well as relapse free survival (RFS). DFS and RFS were combined together into event free survival (EFS) as prognosis parameter of our study. All studies investigated patients with cervical cancer and qRT-PCR was performed to detect lncRNAs expression in tumor tissues. Because the cut-off definitions were various, the cut-off values were different in these studies. 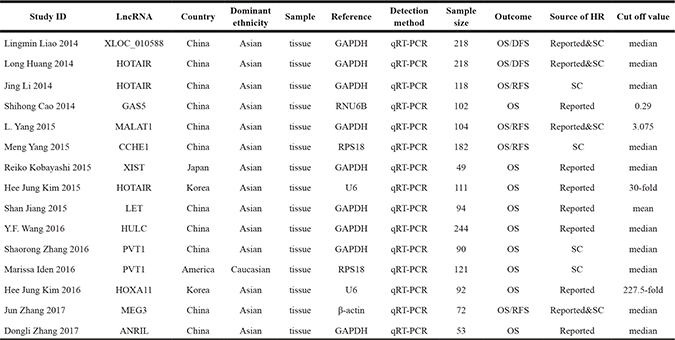 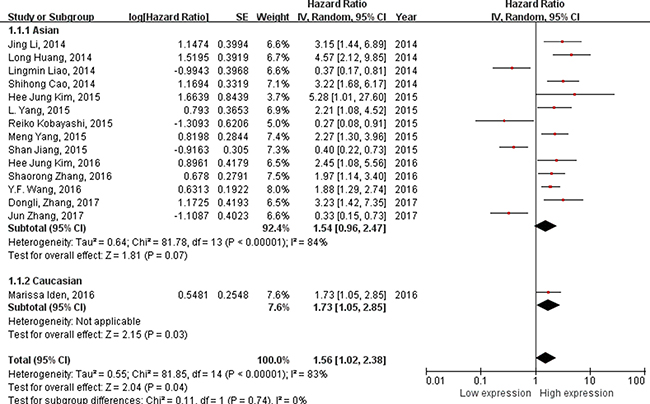 Figure 2: Forest plot of studies evaluating hazard ratios of lncRNAs expression and the overall survival in cervical. The point estimate is bounded by a 95% confidence interval, and the perpendicular line represents no increased risk for the outcome.

Figure 3: Forest plot of studies evaluating hazard ratios of up-regulated lncRNAs and the overall survival of cervical cancer. (A) HOTAIR; (B) PVT1.

Figure 4: Forest plot f studies evaluating hazard ratios of lncRNAs expression and the event free survival in cervical cancer. The point estimate is bounded by a 95% confdence interval, and the perpendicular line represents no increased risk for the outcome.

As shown in Figure 5, Begg’s test was used to perform the publication bias, respectively. In our meta-analysis, Begg’s test suggested there were no publication bias in all groups, owing to the values of P > 0.05. Meanwhile, we used Stata11.0 software to carry out sensitivity analysis to assess whether the individual studies affected the overall results. The results suggested that individual study had little influence on our eventual outcome (Figure 6), and proved that our analysis was relatively stable and credible.

Figure 6: Sensitivity analyses of the studies. (A) overall survival; (B) event free survival.

Cervical cancer is one of the leading causes of cancer related death in women worldwide [26]. Identification of effective disease biomarkers for prognosis is urgently required. In recent years, mounting epidemiological and molecular biological studies have demonstrated that lncRNAs dysregulation was involved in cancers [27–29]. Furthermore, abnormal expression of multiple lncRNAs was found to be related with the tumorigenesis and may have the potential to be prognostic biomarkers and even therapeutic targets of cervical cancer [15, 30]. Therefore, we perform this meta-analysis to evaluate the prognostic ability of lncRNAs in cervical cancer.

In current meta-analysis, we evaluated the prognostic value of lncRNAs in cervical cancer. Our results suggested that high expression of lncRNAs represented a risk factor for OS and cervical cancer. Furthermore, we found that the high expressions of 8 lncRNAs were associated with poor prognosis. Besides, 4 lncRNAs were correlated to poor prognosis with the low expressions of lncRNAs in cervical cancer. Moreover, stratified analyses were performed using studies with the ethnicity. 14 articles reported the relationship between lncRNAs and Asian patents’ OS (HR = 1.54,), and 1article was about Caucasian (HR = 1.73). Besides, EFS analysis also revealed a protective role decreased lncRNAs expression (HR = 1.33). Our results suggested that the expression of these lncRNAs may have a significantly prognosis value in cervical cancer. Due to the limitation of the study number, these conclusions need more clinical trials for verification.

In the enrolling studies, PVT1 and HOTAIR were investigated in two or more articles, and with the increased expression of the two lncRNAs, the prognosis rate was poor in cervical cancer. Our results revealed that PVT1 is increased in the cervical cancer patients, and the high expression of PVT1 was related with the poor prognostic outcome of cancer patients. Summary of Hazard ratios (HRs) of lncRNAs in cervical cancer patients showed that HOTAIR generate the highest HR of 5.28. HOTAIR was the first lncRNA found to be involved in tumor and has been proven to be raised in a variety of human cancers [32]. Meanwhile, HOTAIR is a tumorigenic factor and can be adopted as a diagnosis or predictive biomarker in various cancer types [33, 34], those findings in consist with our results. Notably, HOTAIR was the most investigated lncRNA in cervical cancer, therefore, articles explored HOTAIR as a new biomarker in the diagnosis and treatment of cervical cancer is possibly the most promising.

It should be stressed that there were limitation in our analysis. First, the number size of eligible articles is relatively small, which restrict our ability to evaluate the prognosis of lncRNAs in subgroup analyses. Second, the main ethnicities of the patients in our analysis were Asian, which also might affect the results. Third, due to positive results could be published more easily than negative results, this may lead to hidden publication bias.

A comprehensive search was performed independently by two researchers (Xiangrong Cui and Xuan Jing) via PubMed, EMBASE and Web of Science for literatures published up to February 2017 to obtain relevant articles for the meta-analysis. The search strategy used both MeSH terminology and free text words to increase the sensitivity of the search. The keywords for the search in these databases included: “Long noncoding RNA”, “lncRNA”, “LincRNA”, “Long ncRNA”, “survival” and cervix (or cervical) cancer/neoplasm/tumour/carcinoma. Meanwhile, we screened the references of retrieved relevant articles to identify potentially eligible literatures.

Literatures included in this meta-analysis had to meet the following inclusion criteria: studies about the association between lncRNAs expression in tissues or blood samples and prognosis of patients with cervical cancer; the survival outcomes were performed with OS or EFS including disease free survival DFS and RFS; patients were divided into high and low expression groups; sufficient published data were provided to calculate hazard ratios (HR) and 95% confidence interval (CI). Exclusion criteria were as follow: studies without usable or sufficient data; laboratory articles, reviews, letters, unpublished data and conference abstracts.

HRs and 95% CIs were calculated to assess to the relation between lncRNAs and survival in cervical cancer, with a significance level of α = 0.05. An observed HR > 1 implied a worse survival for the group with elevated lncRNAs expression. Conversely, HR < 1 implied a worse survival for the group with decreased lncRNAs expression [35, 36]. We used Revman5.3 Software (Revman, the Cochrane Collaboration) to perform the meta-analysis and evaluate heterogeneity between studies by Cochrance Q-test and P-values. If heterogeneity was present (I2 ≥ 50% or P ≤ 0.05), random-effect model was used to calculate pooled HRs or ORs, otherwise, the fixed-effect model was utilized [37, 38]. Furthermore, we minimized the influence of heterogeneity through classifying the included studies into subgroups accorded to similar features. The Stata 11.0 Software (Stata, College Station) was performed to evaluate the sensitivity and publication bias of the studies. Publication bias was estimated using Begg’s test with a funnel plot, P < 0.05 was considered statistically significant.

This work was supported by a grant from the Scientific Research Project of Shanxi Provincial Department of health (201601070).