Adipose tissue can be found throughout the body but its composition and secretion pattern differs and is influenced by its localisation in the body and disease states such as obesity and cancer [9–11]. This implicates that available adipose tissue secretome data cannot be simply extrapolated when studying the paracrine effects of breast CAAT.

We performed the first proteomic analysis of the human breast CAAT secretome and explored its influence on biological processes, pathways and transcription factors involved in breast cancer growth.

To identify adipose tissue secreted proteins, we analysed a discovery set of CMCAAT from 6 patients from which 2 CMCAAT were used for LC-MS/MS analysis and 4 CMCAAT for antibody array as low levels of highly bioactive proteins are often not detected by gel-electrophoresis-based techniques [12]. A total of 668 proteins were identified (Supplementary Table 1) and proteins were assigned to several biological processes like signal transduction (18,1%), metabolism (14,5%), energy pathways (14%), protein metabolism (11, 6%), cell growth and/or maintenance (10%) and immune response (6,2%) (Figure 1A). CAAT proteins activate transcription factors like Krüppel-like factor 7 (KLF7) (36, 9%), JUN (20, 2%), FOS (20, 2%) and NFE2 (7, 5%) (Figure 1B). A detailed overview of the biological pathways and functions each of the 668 proteins belong to can be found in Supplementary Table 2. To validate these finding we made use of CMCAAT from an additional 18 patients. In 16 patients, the concentration of 5 identified proteins was measured by ELISA, i.e. leptin (9.1 ± 5.1 ng/ml), adiponectin (267.2 ± 101.5 ng/ml), IL-6 (25.1 ± 7.5 ng/ml), CSF-1 (2.8 ± 1.0 ng/ml) and CCL22 (0.1 ± 0.1 ng/ml) (Figure 1C). Western blot identified leptin, adiponectin and fatty acid binding protein 4 (FABP4) in CMCAAT of the two remaining patients (Figure 1E). As adipose tissue is composed of several cell types, we separated breast cancer-associated adipose tissue from 10 breast cancer patients into TAA and SVF. RT-qPCR revealed expression of adiponectin in TAA (35-fold higher expression in TAA vs SVF, p = 0.005). In contrast, a 5-fold higher IL-6 (p = 0.005) and a 4-fold higher CCL22 expression (p = 0.005) in SVF compared to TAA were observed. CSF-1 did not significantly differ in both fractions (p = 0.959) (Figure 1D). Comparison of our detected proteins in CAAT with the visceral adipose tissue secretome from Alvarez-Llamas et al. [13] containing 259 proteins revealed 153 common proteins (24,6%). CAAT proteins were also compared with the secretome of isolated human adipocytes from non-obese subcutaneous adipose tissue from Lehr et al. [14] and Xie et al. [15], and showed a 32,3% (199 proteins) and 15,8% (295 proteins) overlap respectively (Figure 1F). A detailed description of the common proteins between the different data sets is provided in Supplementary Table 3. 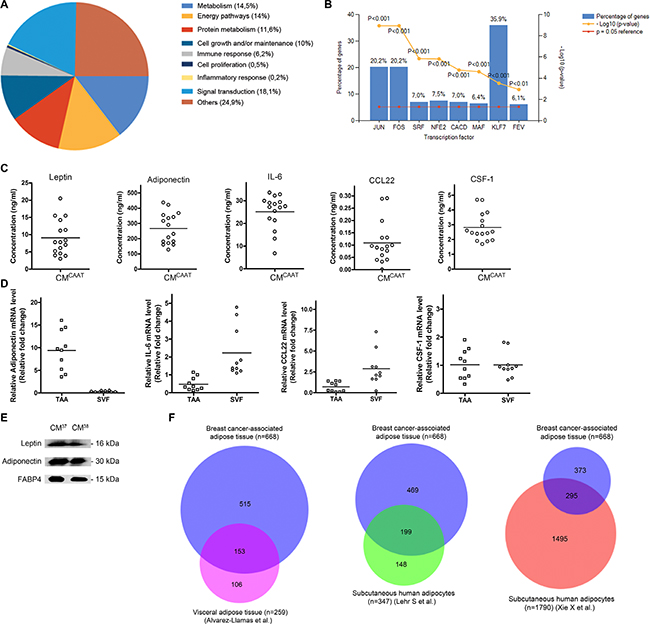 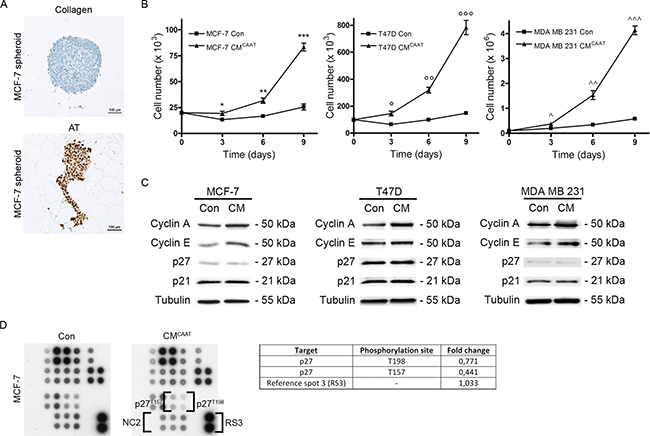 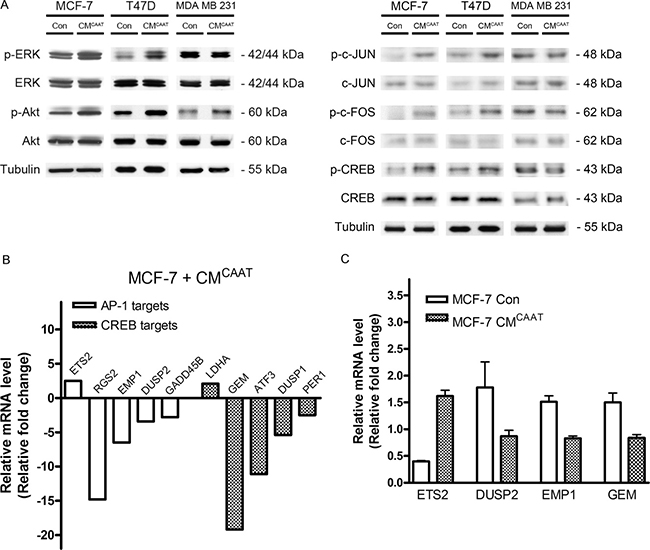 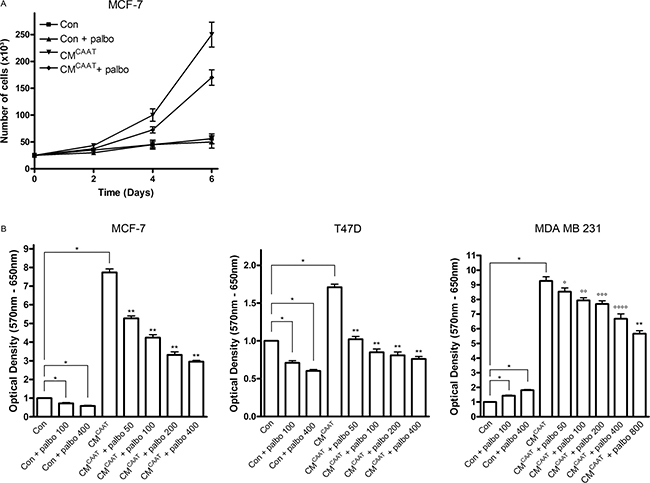 Our study has some limitations that need to be pointed out. First, we used CAAT from a limited number of breast cancer patients with diverse clinical and pathological characteristics (Supplementary Table 4). Second, we did not compare our results with normal breast adipose tissue. The main reason for this is that adipose tissue is a complicated and adaptive organ influenced by different factors form the environment making it difficult to determine ‘normal’ (breast) adipose tissue (see next paragraph). Third, our functional experiments are mainly performed with breast cancer cells cultured as adherent cells to plastic. We did not use 3D-tests with breast cancer cell organoids in matrigel or collagen, resembling more closely the in vivo situation.

Proteome analysis of CAAT-secreted factors revealed a large number of proteins involved in energy pathways and metabolism, which reflects the normal adipose tissue function and has been described by others [31, 37]. When investigating the affected biological pathways, more than 30% of adipose tissue proteins are linked with regulation of KLF7 transcription factor. Krüppel-like factors are drivers of cell proliferation and differentiation in different organ systems and many of them play a role in fat biology [38]. In human adipocytes, KLF7 expression is involved in adipogenesis, obesity and type 2 diabetes [39–41]. Both the biological process and transcription factor analysis confirmed the adipose nature of our CAAT proteome and this was further validated by ELISA (leptin and adiponectin), qPCR (adiponectin) and Western blot analysis (leptin, adiponectin and FABP4) on CMCAAT derived from multiple patients. Physical separation of adipocytes from SVF revealed unique expression patterns with leptin and adiponectin dominantly expressed in adipocytes, and IL-6 and CCL22 dominantly expressed in SVF. Ultimately, we compared our 668 CAAT proteins with available data sets from human visceral abdominal adipose tissue [13] and isolated adipocytes from human subcutaneous adipose tissue [14, 15]. A substantial proportion of proteins was retraced in the three data sets (Supplementary Table 3). However, as expected, CAAT secretome has a unique secretion profile with multiple proteins not previously identified. This indicates that at least a part of our proteome will represent breast CAAT specific proteins, useful when studying paracrine effects of adipose tissue in breast cancer. Whether the identified proteins are breast adipose tissue specific or cancer specific will need more research using comparison of adipose tissue from non-cancer patients or from other sites in a breast cancer patient (e.g. breast adipose tissue versus visceral adipose tissue).

c-Jun and c-Fos are both proto-oncogenes and their homo- or heterodimers form the transcription factor AP-1, linked with cell proliferation, differentiation and survival [17, 42, 43]. A variety of growth factors, chemokines and cytokines stimulate the expression of c-Jun and c-Fos. Several of them like CCL22, four and a half LIM domains protein 1 (FHL1) and leukemia inhibiting factor (LIF) were detected in the breast CAAT proteome and have been linked with breast cancer proliferation and growth [44–47]. The transcriptional activity of c-Jun and c-Fos was stimulated by ERK, JNK and CREB signaling and their activation was detected by phospho kinase screening and Western blot in hormone-dependent MCF-7 and T47D breast cancer cells. However, we were not able to validate this pathway activation in hormone-independent MDA MB 231 cells where levels of p-ERK, p-c-Jun, p-c-Fos and p-CREB remained unchanged upon CMCAAT treatment. This indicates that CAAT proteins are able to enhance MDA MB 231 cell proliferation via other pathways than c-Jun and c-Fos. Moreover, Hardy et al. describes the influence of free fatty acids (FFAs) like oleate and palmitate on Akt-activation and subsequent cell proliferation in MDA MB 231 cells demonstrating that not only proteins but also FFAs can exert a pro-proliferative effect [48]. This correlates with Western blot analysis showing activation of the Akt-pathway in CMCAAT treated MDA MB 231 cells. As our research focused on breast cancer-associated adipose tissue proteins, further research will be necessary to elucidate the role of FFAs in breast cancer.

Palbociclib has recently been FDA approved for use in combination with letrozole for the treatment of postmenopausal women with estrogen receptor-positive, human epidermal growth factor (HER)2-negative advanced breast cancer as initial endocrine-based therapy for their metastatic disease. Palbociclib inhibits CDK4 and 6 to bind cyclin D1, keeping the tumor suppressor retinoblastoma protein (pRb) in its activated form and halting cell cycle progression [49, 50]. In vitro experimentation showed that palbociclib is most effective in estrogen receptor positive breast cancer cell lines [51]. This correlates with our observation that proliferation of hormone-dependent MCF-7 and T47D breast cancer cells was significantly inhibited upon palbociclib treatment, while this effect was not observed in hormone-independent MDA MB 231 breast cancer cells. On the contrary, we see a significant, dose dependent increase in palbociclib treated MDA MB 231 cells (non treated with CMCAAT). A possible explanation of these findings may be that CDK4/6 inhibition induces a compensatory mitogenic response as has been described in ER+/HER2- models [52]. In these models, the increased mitogenic signals due to palbociclib treatment were completely suppressed when the ER signaling pathway was simultaneously blocked by administration of an ER antagonist. This explains why the most positive clinical results are seen when palbociclib is combined with an endocrine therapy like the aromatase inhibitor letrozole in ER+/HER2- breast cancer patients. It is possible that in MDA MB 231 cells, which lack concurrent ER signaling, there is no mechanism present that could overrule the compensatory mitogenic signaling elicited by CDK4/6 inhibition. Further research will be necessary to test this hypothesis.

CAAT was obtained from breast cancer patients undergoing mastectomy at Ghent University Hospital in accordance with local ethics committee and written informed consent was obtained from all subjects (Supplementary Table 4). CMCAAT preparation and separation of adipose tissue in TAA and SVF were previously described [16]. In short, CAAT was washed, cut into pieces and placed in 6-well plates with DMEM/F12 + 0.5% BSA (= control medium) on a nutating mixer at 37°C and 5% CO2. After 24 h, CMCAAT is harvested, centrifuged, filtered, aliquoted and stored at –80°C until experimentation. For separation of CAAT into TAA and SVF, CAAT is washed, thoroughly minced and digested with collagenase. After centrifugation, the upper layer containing TAA is separated from SVF and RNA of both fractions was extracted using RNeasy Plus Universal Kit (Qiagen, Venlo, The Netherlands). Supplementary Table 5 demonstrates the use of CMCAAT throughout the article.

CMCAAT samples were run on NuPAGE 4%-20% Bis-Tris gradient gels (Invitrogen) in SDS-containing denaturation buffer, stained with 0.5% Coomassie Brilliant Blue (Bio-Rad) in 40% methanol and 10% acetic acid for 20 minutes, and destained. Gel bands were processed and analyzed by LC-MS/MS as previously described [16, 55].

For proliferation tests, 20.000 cells were seeded in culture flasks with normal growth medium for 24 h. Every three days, cells were washed with serum-free medium and control medium or CMCAAT with control medium (ratio 1:1) was added. On day 3, 6 and 9, cells were trypsinized and counted with Countess Automated Cell Counter (Life Technologies-Invitrogen, Gent, Belgium).

For MTT-assays, 2000 cells were seeded in a 96-well plate with normal growth medium for 24 h. Cells were washed with serum-free medium and control medium, CMCAAT with control medium (ratio 1:1) and/or palbociclib were added and refreshed after 2 days. On day 5, 40 μl/well of 1 mg/ml MTT-solution was added and incubated for 2 h protected from light. Supernatant was removed and the formazan crystals were dissolved in 100 μl/well DMSO. Optical density was measured with a Spectramax Paradigm Multi-Mode Microplate Reader (Molecular Devices, Sunnyvale, CA).