Conclusions: We confirmed the feasibility of IVIM MR imaging in preoperative assessment of HER2 status of gastric cancers, which might make up the shortfall of biopsy and facilitate personalized treatment for patients with gastric cancers.

Gastric cancer is one of the most common digestive malignancies worldwide and many patients were diagnosed at advanced stage [1]. Since traditional chemotherapy often encountered resistance with a number of side effects, molecular targeted therapy became another choice for selected patients [2, 3]. Human epidermal growth factor receptor 2 (HER2) is a proto-oncogene encoded by ERBB2 on chromosome 17. When the amplification of HER2 gene occurs, it induces the overexpression of HER2 protein. Then an excessive amount of HER2-containing heterodimers will be formed which enhances the signaling responses to growth factors. With a complex signaling network, the overexpression of HER2 leads to activations associated with cell proliferation, differentiation and survival [4–6]. And HER2 overexpression is an important biomarker for treatment with trastuzumab in patients with gastric and gastroesophageal junction cancers [3]. ToGA trial indicated that the combination of chemotherapy plus trastuzumab proved superior to chemotherapy alone with an extend survival from 11.8 to 16.0 months among patients with higher HER2 expression [3]. Hence, an accurate assessment of HER2 status is critical to optimize the therapeutic effect.

Nowadays, the information of HER2 status is mainly obtained through immunohistochemistry (IHC) or fluorescence in situ hybridization (FISH) using biopsy or surgical specimens. However, patients diagnosed at advanced stage usually lose their chance of surgical resection, and endoscopic biopsy can only be used, which is unable to avoid sampling error. In cases with smaller areas of HER2 expression, a biopsy sample taken from a negative area would return a false negative result [7].

However, ADC values derived from traditional DW imaging using 2 b values reflect a combined effect of water molecular diffusion and microvascular perfusion [18]. As an extend model based on DW imaging, intravoxel incoherent motion (IVIM) is able to separate diffusion from perfusion component in vivo using an increased number of b values [19]. MR signals obtained at higher b values are mainly related to diffusion, while perfusion effects display dominance at lower b values [20]. With a bi-exponential decay model, the pure diffusion coefficient (D) and pseudo diffusion coefficient (D*) could be obtained simultaneously, along with perfusion related fraction (f). Since its first introduction in 1986 [21], IVIM MR imaging has shown a great potential in characterizing and grading various tumors. For instance, values of IVIM-derived parameters were significantly correlated with histological grade of hepatocellular carcinoma (HCC), and they showed significance in differentiating high-grade from low-grade HCC [22]. Kim Y et al detected significantly lower ADC and D values in HER2 negative breast cancer than positive ones [23]. We hypothesized that IVIM parameters might change based on different HER2 status of gastric cancer, which has never been reported previously.

Therefore, the purpose of this study was to compare the IVIM parameters between HER2 positive and negative gastric cancers, and to explore the role of IVIM MR imaging in evaluating HER2 status of gastric cancers preoperatively. 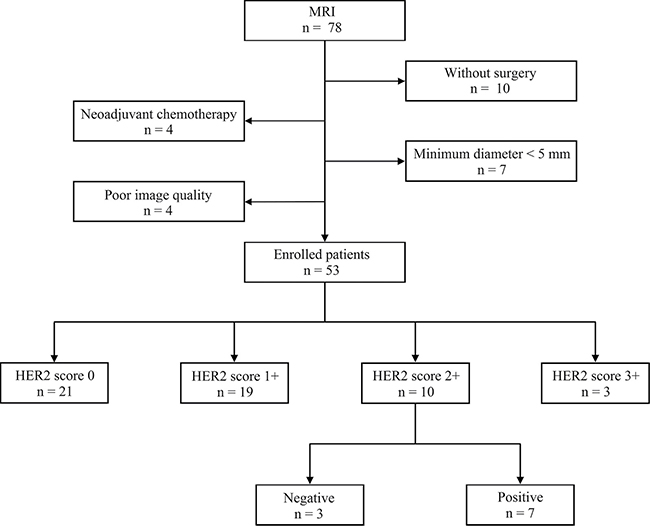 Figure 1: Inclusion and exclusion flowchart of this study.

The clinicopathological characteristics of the 53 patients with gastric cancers and different HER2 status are shown in Table 1. Each patient had one lesion identified. 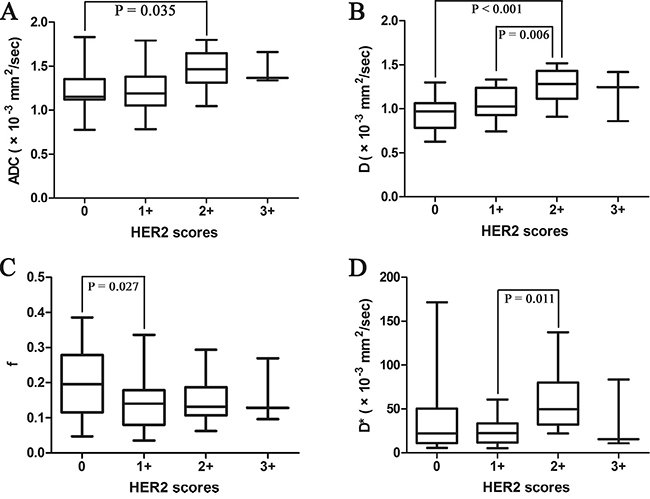 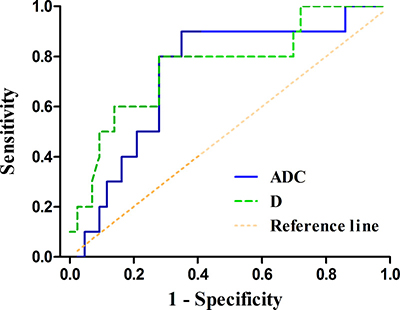 We successfully performed IVIM MR imaging in patients with gastric cancers, and found that preoperative IVIM parameters correlated with HER2 status based on postoperative specimens significantly, which has never been reported previously.

It was reported that HER2 positive gastric cancers were more frequently found in gastroesophageal junction, intestinal type and well differentiated cases [7, 24–28]. In our study, there were no significant differences of HER2 status among different age groups, genders, tumor locations, and differentiation degrees. Although it differed in Lauren classification, our data with only 53 patients was not enough to verify the difference of HER2 positivity in different Lauren classifications. However, a group of studies with large sample size have demonstrated these differences. For instance, Aizawa M et al. reported that higher HER2 positivity was found in well or moderately differentiated gastric cancers than poorly differentiated ones (data from 1,006 patients) [28]. Van Cutsem E et al. reported that overexpression or amplification of HER2 was more common in patients with intestinal histology compared with those with diffuse histology (data from 3,665 patients) [24].

Moreover, IVIM-derived D value could reflect the motion of water molecules more factually than ADC value for excluding the impact of perfusion effect. Woo S et al. reported that ADC value showed a fair relationship with histologic grade of hepatocellular carcinoma (r = −0.448, P = 0.002), while D value demonstrated a moderate to good relationship (r = −0.604, P < 0.001) with Spearman correlation test [31]. In our study, the correlation between the D value and HER2 scores (r = 0.481) was stronger than the ADC value (r = 0.276) with partial correlation test including tumor volume. And our previous study showed that the mean and minimal ADC values correlated with HER2 scores of gastric cancers with r values of 0.419 and 0.367 (Spearman correlation test) [17], which were also weaker than the D value in the current study. Both ADC and D values performed well in differentiating HER2 positive and negative gastric cancers with an AUC up to 0.733 and 0.762.

The f value reflects the vascular volume fraction of the tumor, and the D* value reflects the rate of microcapillary blood flow. Both of them represent the perfusion effect, while ADC and D values represent the diffusion effect of tissues [21]. We failed to detect any significant correlation between f or D* value and HER2 scores of gastric cancers in this study. Kim Y et al also reported no significant differences of f and D* values between HER2 positive and HER2 negative breast cancers, while there were significant differences of ADC and D values between them [23]. Ma L et al reported that dynamic contrast enhancement (DCE) MR derived Ve value of gastric cancers with diffuse type was significantly higher than those with intestinal type [32]. However, DCE or perfusion parameters did not necessarily correspond to f value. And the application of D* value was limited due to its instability and low signal to noise ratio [33, 34].

There were some limitations in our study. Firstly, the samples size was relatively small, especially for the cases with HER2 score 3+, which might cause some bias. Secondly, the pathologic foundation and mechanism of higher ADC and D values in HER2 positive gastric cancers were only speculative, without any standard reference. Thirdly, the number and setting of b values were arbitrarily chosen for IVIM imaging without optimization, and the region of interest (ROI) was drawn manually without the reference to postoperative specimen. All the issues would be investigated in our future work.

Our study received the approval of local ethics committee. Written informed consent was obtained from each patient. The inclusion criteria were: 1) with a diagnosis of gastric cancer confirmed by endoscopic biopsy; 2) willing to undergo MR examination for preoperative assessment; 3) without absolute contraindications to MR examination and gadolinium contrast agents, such as cardiac pacemaker or defibrillator, aneurysm clip, nerve stimulator, insulin pump, cochlear implant. The exclusion criteria were: 1) receiving local or systematic treatment before MR examination or surgery; 2) without accurate HER2 scores and status based on postoperative specimens; 3) with a minimum diameter of tumor less than 5 mm insufficient to contain a ROI; 4) poor MR image quality for further analysis due to motion or magnetic susceptibility artifacts.

All patients underwent MR examination after fasting over 8 hours. After confirming that no contraindications (such as glaucoma, prostate hypertrophy or severe heart disease) were presented, 20 mg of scopolamine butyl bromide (1 mL: 20 mg; Chengdu NO.1 Drug Research Institute Company Limited, Chengdu, China) was injected intramuscularly to prevent gastrointestinal motility 10 minutes before MR examination. Forty-two (79.2%) of 53 patients received scopolamine butyl bromide (no adverse effects occurred within and after MR examination), whereas the remaining 11 patients (20.8%) had a contradiction to the drug regimen (9 patients) or rejected the drug (2 patients). Then all patients were asked to drink 800 ~ 1000 mL warm water 10 minutes before MR examination to fill the gastric cavity. Before MR scanning, the patients were trained to breathe smoothly.

All MR images were reviewed by 2 radiologists (J. H., Z. Z.) with 8 and 10 years’ experience in abdominal MR imaging, who were blinded to the endoscopic biopsy and postoperative pathologic findings. The IVIM sequence was loaded into a software IDL 6.3 (ITT Visual Information Solutions, Boulder, CO), and then was analyzed with both mono-exponential and bi-exponential models introduced by Le Bihan [19].

Gastric cancer lesions showed mildly hyperintense on T2W, and hyperintense on IVIM (b = 800 sec/mm²) images with remarkable contrast enhancement. For each patient, the specific slice of axial IVIM image (b = 800 sec/mm²) showing the largest area of tumor was selected. Based on the consensus of two radiologists, an oval ROI (mean area, 49.7 mm2; range, 27.2 ~ 97.8 mm2) was manually drawn as large as possible within the solid part of the lesion by referring to the corresponding images of other MR sequences. Artifacts, distortions, vessels, necrotic and hemorrhagic tissues were carefully avoided in choosing the ROIs. If the lesion showed a sandwich sign [12], the ROI was set to avoid the internal muscular layer. Then the ROI was automatically transferred into the parameter maps (ADC, D, f and D* maps, respectively) and the mean value from each ROI was obtained. The ADC value was calculated with a mono-exponential decay model: Sb = S0 × exp(−b × ADC), by using multiple b values. The D, f and D* values were calculated by the bi-exponential model: Sb/S0 = (1 – f) × exp(-b × D) + f × exp(-b × (D* + D)), in which Sb represents the mean signal intensity with diffusion gradient, S0 represents the mean signal intensity when b = 0 sec/mm² [19].

Forty-four patients underwent curative gastrectomy (including 16 total and 28 partial gastrectomies) and 9 patients underwent palliative resection by the surgeons (M. W., H. W.) with 6 and 9 years’ experience in gastrointestinal surgery. The pathological analyses were performed by a pathologist (L. C.) with 6 years’ experience in digestive malignancy, who was blinded to MR findings and IVIM measurements. The location, histological differentiation and Lauren classification of the gastric cancers were analyzed and recorded according to the World Health Organization (WHO) classification (2010) [35]. Histopathological staging of the tumors was performed based on the TNM classification of the American Joint Committee on Cancer (AJCC, 7th edition) [36]. The mean volume of the tumors was 30617.4 ± 29918.2 mm3 (range, 812.5 ~ 121482.0 mm3). In our study, 3 patients (3/53, 5.7%) were diagnosed with distant metastasis (2 with peritoneal metastases and 1 with hepatic metastasis, respectively) postoperatively, which were not observed with conventional diagnosis preoperatively.