Juvenile xanthogranuloma (JXG) is a rare histiocytic disorder that is usually benign and self-limiting. We present a case of atypical, aggressive JXG harboring a novel mitogen-activated protein kinase (MAPK) pathway mutation in the MAPK1 gene, which encodes mitogen-activated protein kinase 1 or extracellular signal-regulated 2 (ERK2). Our analysis revealed that the mutation results in constitutive ERK activation that is resistant to BRAF or MEK inhibitors but susceptible to an ERK inhibitor. These data highlight the importance of identifying specific MAPK pathway alterations as part of the diagnostic workup for patients with histiocytic disorders rather than initiating empiric treatment with MEK inhibitors.

Juvenile xanthogranuloma (JXG) is a rare non-Langerhans cell (LCH) histiocytic disorder with histologic features characteristic of dermal dendrocytes (fascin+, CD1a-, CD207-) and macrophages (CD14+, CD68+, CD163+, and factor XIIIa+) [1]. While the majority of patients with JXG have skin-limited lesions, some also present with disseminated disease [2]. JXG is histologically similar to Erdheim-Chester disease (ECD), a disseminated histiocytic disorder of adults that is also characterized by frequent activating somatic mutations of MAPK pathway genes [3, 4]. Pediatric JXG has also been reported in children with germline mutations in the neurofibromatosis 1 (NF1) or neurofibromatosis 2 (NF2) genes [5, 6]. We have previously described two patients with multifocal histiocytic lesions with characteristics of both LCH and JXG that harbor the BRAF-V600E mutation [7]. Mixed histiocytic disorders with phenotypic features of more than one classic histology (e.g. CD207+/fascin- and CD207-/fascin+ in a single lesion) or lesions with multiple distinct histologies (e.g. homogenous CD207+ or fascin+ in different lesions) with common mutations across lesions are an increasingly recognized phenomenon [8, 9]. These data support a model of pathogenesis in which activating MAPK pathway mutations occurring at specific stages of differentiation in myeloid precursor cells define the histologic and clinical presentations of diverse histiocytic disorders [8]. Here we present a case of a patient with atypical, aggressive JXG harboring a novel mitogen-activated protein kinase (MAPK) pathway mutation in the MAPK1 gene, which encodes mitogen-activated protein kinase 1 or extracellular signal-regulated 2 (ERK2).

Treatment with clofarabine initially decreased the lymphadenopathy and splenomegaly. After two months of treatment the patient relapsed with fever, lymphadenopathy, hepatosplenomegaly and prolonged pancytopenia, and became transfusion dependent for both red blood cells and platelets. The bone marrow showed patchy histiocytic proliferation with formation of non-caseating granulomas, identical to the original bone marrow studies. Over the course of 7 months the patient had incomplete responses to the following chemotherapy regimens: methotrexate, etoposide, ifosfamide and dexamethasone; alemtuzumab; bortezomib, vinorelbine and ifosfamide. After failing these treatments he received etoposide and dexamethasone for 5 months achieving nearly a complete remission, then received myeloablative conditioning and stem cell transplant resulting in complete remission (Supplementary Figure 1B). He remained in remission but died post-transplant from acute respiratory failure of uncertain etiology, most likely infection complicated by acute pulmonary hemorrhage approximately 3 months after transplant.

Blood and frozen tumor samples were collected at the time of diagnosis (before initiation of treatment) and post-chemotherapy under a Baylor College of Medicine IRB-approved protocol and DNA was extracted. Whole exome sequencing (WES) on blood and tumor was performed as previously described [7] using the Baylor College of Medicine Human Genome Sequencing Center VCRome 2.1 design array (42 Mb, NimbleGen) on an Illumina HiSeq 2000 instrument platform and analyzed utilizing the HGSC Mercury pipeline (https://www.hgsc.bcm.edu/software/mercury) with 96.27% of target bases having at least 20-fold coverage.

A novel somatic mutation was detected in MAPK1, the gene which encodes p42MAPK or ERK2. The mutation (c.961G>A; p.D321N) localizes to the C-terminal docking (CD) domain of ERK2 (Figure 1A) and was observed in 7/71 (10%) reads from the tumor and 0/102 from the matched peripheral blood sample. It was confirmed by sequencing on the Ion AmpliSeq platform (182/1996 variant reads in tumor versus 9/1429 variant reads in normal) [7] as well as targeted PCR and Sanger sequencing (Figure 1B). Three other somatic mutations in genes not known to be linked to cancer were also identified (Supplementary Table 2).

In silico analysis of the predicted 3-dimensional structures of wild-type and p.D321N mutant proteins using SWISS-MODEL and Swiss-PdbViewer [10] revealed changes in the CD domain of ERK2 (Figure 1C). To assess the functional effect of the p.D321N mutation on the MAPK pathway, we analyzed the phosphorylation status of ERK1 and ERK2 in primary cell culture from the patient’s tumor biopsy compared to healthy control tonsil (from elective tonsillectomy), and also in HEK293 cells transiently transfected with wild-type or p.D321N mutant MAPK1 constructs generated by site-directed mutagenesis. In both cases, the mutation led to constitutive ERK activation, in contrast to either the healthy tonsil tissue specimen or the transfected wild-type ERK2 construct. (Figure 2A, 2B). 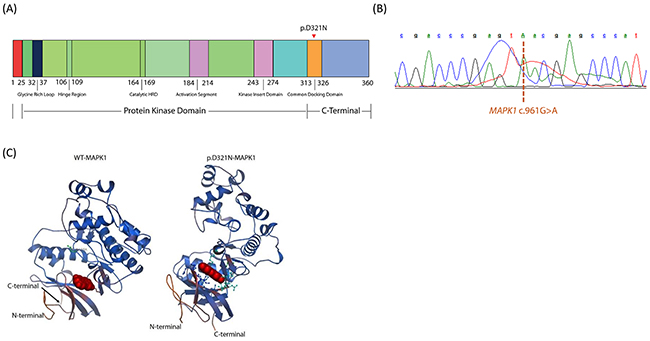 Figure 1: (A) Schematic illustration of the functional domains in human ERK2. Triangle indicates the missense mutation identified in the current study. Figure not to scale. (B) Electrophoretogram obtained from Sanger sequencing of the MAPK1 gene in the patient. The dashed line indicates the c.961G>A point mutation detected. (C) Ribbon diagrams of wild-type and mutated human ERK2 proteins depicting predicted structural changes resulting from the identified MAPK1 mutation, including alterations in the C-terminal docking (CD) domain. Structures were prepared from protein data bank file 4S31.

We next assessed the ability of various targeted MAPK inhibitors to suppress pathway activation induced by the MAPK1 mutation. As would be predicted from canonical MAPK signalling, ERK phosphorylation was unaffected by a BRAF-V600E inhibitor (vemurafenib) or a MEK inhibitor (trametinib) [11, 12]. The ERK inhibitor (TCS ERK 11e) was able to decrease ERK1/2 phosphorylation (Figure 2C).

Our previous WES analysis of 4 JXG cases with classic morphology (2 skin-limited and 2 disseminated) and 3 mixed LCH/JXG lesions did not reveal any somatic mutations in MAPK genes other than BRAF-V600E in mixed JXG/LCH lesions. However, a total of 17 somatic mutations in non-MAPK genes were found in the 4 “pure” JXG lesions analyzed (median of 4 mutations per case, range 0 to 9 mutations), including a PI3KCD mutation in one patient [7]. In another study, combined whole exome sequencing in skin lesions from 1 pediatric JXG patient and transcriptome sequencing in 11 JXG patients (including 4 pediatric patients) identified somatic mutations in MAP2K1 (27% of the cases), KRAS (18%), and NRAS (18%) [3]. PI3K pathway mutations have also been frequently observed in ECD [3, 9].

The c.961G>A MAPK1 mutation resulted in constitutive ERK2 activation. Constitutive activation of ERK2 might occur due to uncoupling and loss of sensitivity to inhibition by dual specificity phosphatases (DUSPs) [16, 17], or loss of binding to p90 ribosomal S6 kinases (RSK) that can inhibit nuclear translocation and function of ERK2 [18, 19] – each function being reliant on an intact CD domain of ERK2, which was disrupted by this particular mutation. MAPK pathway activation is known to play a critical role in regulating macrophage production in colony stimulating factor 1-dependent proliferation of bone marrow progenitors [20]. ERK hyperactivation thus can also result in aberrant development of the macrophage progenitors.

Inhibition of BRAF and MEK within the MAPK pathway did not inhibit ERK activation, which was in contrast partially inhibited by a direct ERK inhibitor. However, it is of note that decrease in ERK phosphorylation does not necessarily confirm decreased ERK catalytic activity as it can also reflect altered inhibitor-induced binding of ERK with upstream MEK [21]. It has been shown in the context of glioblastoma that cross-inhibitory regulation between the MAPK and PI3K/mTOR pathways by p70S6K contributes to both tumorigenic and self-renewal capacity of cancer stem-like cells [22]. In fact, the most robust results for glioblastoma were obtained when a combination of MAPK and PI3K/mTOR inhibitors was used in comparison to individual inhibitors [22]. Both MAPK and PI3K/mTOR signaling pathways have multiple nodes that are essential for feedback regulation and crosstalk with other signaling pathways. In fact, MAPK can regulate mTORC1 activation by TSC2 phosphorylation [23, 24]. Hence, it will be important to define signaling crosstalk in histiocytic disorders in order to better inform rational therapeutic design.

Activating mutations in MAPK pathway genes have been identified in most cases of LCH [2, 25]. Emerging data from a handful of JXG cases sequenced to date supports the pathologic activation of ERK as a driver of pathogenesis in this histiocytic disorder as well. While JXG is often self-limiting, there are also cases of fatal progression. To our knowledge, this is the first case of an activating mutation in the gene encoding ERK2, the distal member of the canonical MAPK pathway, in a histiocytic disorder. Targeted inhibition of MAPK signaling is a potentially promising strategy for patients with chemotherapy-refractory disease. Based on existing data in which all identified activating MAPK pathway mutations have been proximal to ERK, one could consider empiric treatment with a MEK inhibitor for such patients [3]. However, this case provides an example in which MEK inhibition would presumably be ineffective, supporting a strategy of identifying the specific MAPK pathway alterations in each case as part of the diagnostic workup for patients with histiocytic disorders.

Blood and frozen tumor samples were collected from the patient at the time of diagnosis (before initiation of treatment) and post-chemotherapy under a Baylor College of Medicine IRB-approved protocol and DNA was extracted.

The three dimensional (3D) protein structures of the wild-type and mutant ERK2 proteins were modeled and compared using SWISS-MODEL and Swiss-PdbViewer [10]. The crystal structure of the wild-type ERK2 (4S31) was used to pattern the mutant 3D structure.

The authors have no conflicting financial interests related to this study.