Objective: To investigate the value of integrin αvβ3 targeted imaging with 99mTc-HYNIC-PEG4-E[PEG4-c(RGDfk)]2 (99mTc-3P-RGD2) as a radiotracer in dectecting osteolytic bone metastases.

Methods: This is a retrospective study involving a cohort of 69 consecutive patients including 59 with lung cancer and 10 with other cancers. Patients were required to receive whole body scan (WBS) and regional SPECT/CT imaging with 99mTc-3P-RGD2 (RGD imaging) and 99mTc-MDP (MDP imaging) as a radiotracer successively within days. Final diagnosis was based on comprehensive assessment of all available data including case history, CT, MRI, SPECT/CT, PET/CT, histopathology and 6-12 months follow-up. Visual observation and semiquantitative analysis (T/N: tracer uptake ratio of osteolytic metastases to normal bone) of 99mTc-3P-RGD2 or 99mTc-MDP imaging were performed and their detective values for osteolytic metastases were compared.

Skeleton is one of the most common sites for metastasis. A majority of patients may present osteolytic and osteoblastic metastasis, which will result in marked disturbances of bone remodeling that can be lytic and/or blastic. Osteolytic metastasis, a common complication in breast cancer, lung cancer, prostate cancer, or multiple myeloma [1, 2], brings about significant morbidity of intractable pain, spinal cord compression, pathologic fracture, functional impairment and hypercalcemia [3, 4]. In addition, bone micro-metastasis can serve as an independent predictor of poor outcome in patients with tumor even among lymph node-negative patients with primary tumors of less than 2 cm [5]. Early diagnosis of osteolytic metastasis is definitely important for its correct treatment and better prognosis.

Anatomical imaging (e.g. CT and MRI) has been commonly used for the diagnosis of osteolytic lesions. However, the diagnostic sensitivity of CT is relatively low in cases of a mineral content loss of less than 50% at the lesions sites [6]. Meanwhile, MRI could not readily display bone degradation [7]. 99mTc-diphosphonates (99mTc-MDP)-based planar bone scan is considered as the standard technique for the detection of skeletal metastasis as it shows high sensitivity, especially for bone lesions with osteogenesis. As is known to all, the accumulation of 99mTc-MDP in the bone is highly relied on the osteoblast activity [8]. Absence of 99mTc-MDP or high false negative was reported at early period in osteolytic lesions rich in osteoclast, tumor cells and different degree of osteolysis. Therefore, the detection value of 99mTc-MDP imaging in osteolytic lesions was lower than that in the osteoblastic lesions [9]. On this basis, it is urgent to develop appropriate imaging technique(s) for the detection of osteoclasts and adjacent tumor cells in patients with osteolytic metastases in an early and accurate manner.

Malignant interaction between tumor cells and osteoclasts in bone microenvironment plays a pivotal role in the pathogenesis of metastatic bone disease such as osteolytic and/or osteoblastic bone metastases. Tumor cells contributed to the recruitment and activation of osteoclasts, which triggered regional osteolysis and tumor cell proliferation [10]. Tumor cells and osteoclasts are the main component of osteolytic metastatic lesions. Integrin αvβ3, highly expressed in several tumor cells and activated endothelial cells in newly-generated vessels, has been considered as a target for tumor imaging with radiolabeled arginine-glycine-aspartic acid (RGD) peptides and analogues. Furthermore, osteoclast expressing high level of integrin αvβ3 had attracted great attention for positive imaging of osteolytic bone metastasis [11].

99mTc-HYNIC-3PEG4-E[c(RGDfK)2] (99mTc-3P-RGD2) is a cyclic RGD dimmer peptide with high specificity and affinity to integrin αvβ3. To date, 99mTc-3P4-RGD2 scintigraphy has been commonly used for differential diagnosis of solitary pulmonary nodule, lymph node metastasis and treatment response monitoring [12-15]. This retrospective study was designed to investigate the detective and diagnostic value of 99mTc-3P4-RGD2 imaging for osteolytic bone metastasis.

This study was approved by the Institute Review Boards of both Nanjing Medical University and Nanjing First Hospital. Written informed consent was obtained from each patient. All reported investigations were conducted in accordance with the Declaration of Helsinki and with our national regulations. Eighty-eight patients were diagnosed with malignant tumors such as primary lung cancer, lung metastases from thyroid cancer, malignant chromaffin-cell tumor, gastric cancer, breast cancer based on the assessment of case history, CT, MRI, SPECT/CT, PET/CT histopathology and 6-12 month follow-up data. Sixty-nine (48.6%) patients presenting pulmonary nodule were suspected with lung cancer and concurrent osteolytic bone metastases. The exclusion criteria were as follows: (i) received treatment before imaging; (ii) pregnant and breastfeeding patients; (iii) those with a history of bone trauma, fracture, and bone inflammation such as tuberculosis within one year; or (iv) those could not accomplish the required examinations because of severe pain or claustrophobia.

99mTc-3P-RGD2 was prepared according to our previous description[16, 17]. Briefly, 1 mL Na99mTcO4 solution (1, 110-1, 850 MBq) was added into lyophilized kit formulation containing 20 mg hydrazinonicotinamide-PEG4-E[PEG4-c(RGDfK)]2 (HYNIC-3P-RGD2), 6.5 mg tricine, 5 mg trisodium triphenylphosphine-3, 39, 399-trisulfonate (TPPTS), 38.5 mg disodium succinate hexahydrate, 40 mg mannitol, and 12.7 mg succinic acid. The reaction system was incubated in water at 100°C for 20 min. The radiochemical purity of the product was > 98% by radio-HPLC. Radiopharmaceuticals were then subject to a 0.20mm Milex-LG filter and diluted to 740MBq/ml for clinical study.

We evaluated all of the patients using 99mTc-3P-RGD2 imaging and 99mTc-MDP imaging [including both whole body scan (WBS) and SPECT-CT with consistent imaging field] within one week. The imaging was performed on a SPECT-CT equipment (Symbia T6, Simense, Germany) according to manufacturer’s instructions. All patients had urinated completely prior to imaging. Imaging was performed within one week. Anterior and posterior WBS was performed 1h after intravenous injection of 99mTc-3P-RGD2 (750±37.5MBq, in 1.0 ml saline) or 3h after intravenous injection of 99mTc-MDP (750±75MBq, in 1.0 ml saline). WBS imaging parameters included low-energy high-resolution collimators, bed movement speed of 10.0 cm/min, energy window of 20% width and centered on 140keV. SPECT data set was obtained (ZOOM of 1.3, 256 by 256 matrix size, 30s/Frame for 32 frames and 180° each head of the dual head-camera) immediately after WBS using a low-energy high-resolution collimator at 140 keV with a window width of 20%. Then the data were reconstructed with ordered subset expectation maximization (OSEM). CT scan was performed in the same anatomic locations as SPECT with a tube voltage of 130 kV and current intensity at 120 mA/slice with a slice thickness of 3 mm.

The final diagnosis of osteolystic bone metastases was based on histopathology, imaging findings (i.e. CT, SPECT/CT, PET/CT, MRI) and clinical follow-up data using specific standards as follows: (a) histopathologically proven; and (b) Besides primary malignancy diagnosis, CT or magnetic resonance imaging (MRI) results indicated obvious bone destruction without osteogenic imaging performance. (c) Increased range and/or lesions of bone destruction during follow-up [19-21]. During the clinical follow-up, multiple imagings were required for the patients, and all patients were followed up at least 6 months. Lesions exhibiting both osteolytic and osteosclerotic changes were verified by either type, depending on the predominant changes [22].

Data were expressed as mean ± standard deviation. The number of osteolytic bone metastases detected using 99mTc-3P-RGD2 and 99mTc-MDP was compared. Sensitivity of 99mTc-3P-RGD2 imaging and 99mTc-MDP imaging modality were compared using McNemar test. The lesion detection consistency of the two modalities were compared using the Kappa test. P < 0.05 was considered to be statistically significant.

Sixty-nine cases with malignant tumor were confirmed with 131 osteolytic metastases according to the comprehensive data based on case history, CT, MRI, SPECT/CT, PET/CT examinations, histopathology and 6-12 monthes follow-up. Patients’ characteristics and the number of osteolytic, lymph node metastases were listed in Table 1.

Table 1: Demographic profile and the final histological diagnosis of 69 patients with malignant tumors and distant metastasis

The distribution of the 131 osteolytic bone metastases was summarized in Table 2. Among these metastases, 57 were localized in the neck and chest including cervical vertebra (8), thoracic vertebra (11), sternum (7), rib (31), 20 in the lumbar vertebra, 33 in the sacrococcyx and pelvis, and 21 in the appendicular skeleton including limb (14) and shoulder (7).

Based on visual analysis, osteolytic bone metastases were mainly manifested as significant accumulation (hot area, Figure 1A and 1B), occasionally slight higher uptake (Figure 1C) or absence of 99mTc-3P-RGD2 on WBS and SPECT-CT imaging with or without bone destruction on CT (cold area, Figure 1D). For 99mTc-MDP, osteolytic bone metastases were manifested as “cold area” and occasionally as increased uptake (Figure 2 and 3). Single osteolytic metastasis (with a long diameter of 4.1 cm) was manifested as cold region with slight elevation of 99mTc-MDP uptake in the peripheral part, while negative findings were observed on 99mTc-3P-RGD2 WBS for the single osteolytic metastasis. 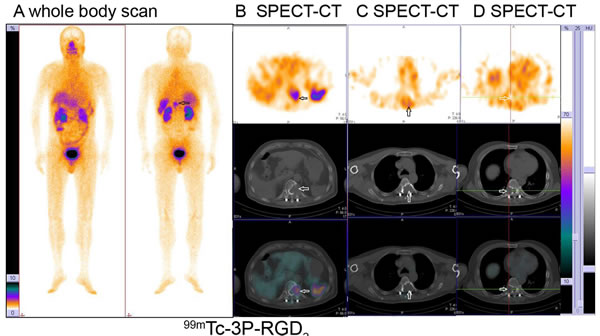 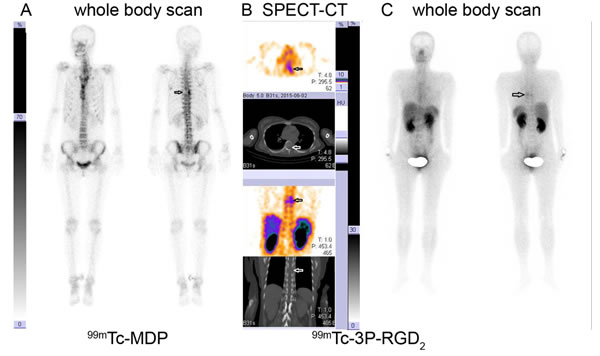 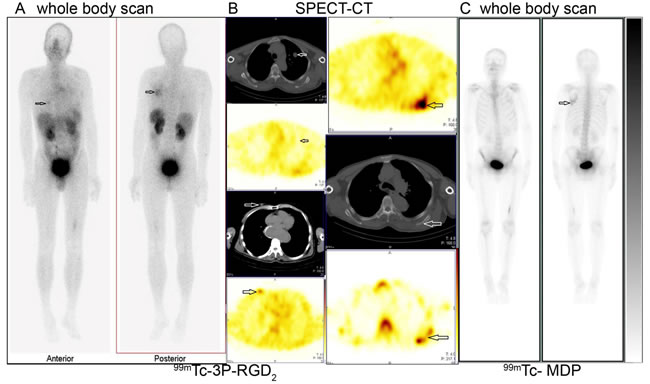 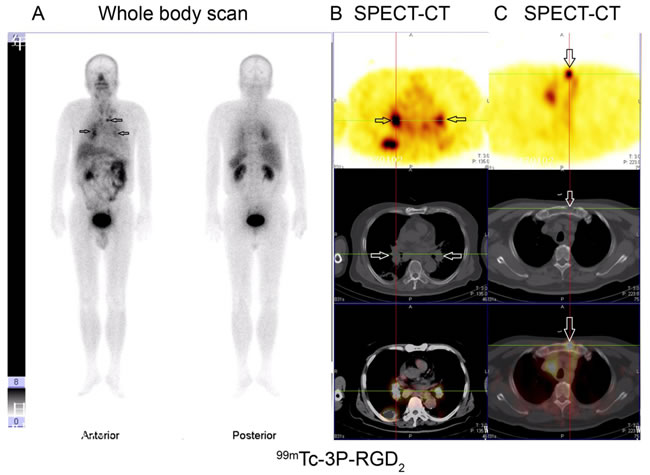 In metastatic bone tissues, 99mTc-MDP imaging reflects bone metabolism and osteogenesis, while 99mTc-3P-RGD2 imaging reflects the existence of integrin αvβ3–overexpressing tumor cells, osteoclast, angiogenesis [23, 31]. Osteolytic bone metastases usually demonstrated as increased accumulation of 99mTc-3P-RGD2 imaging and low uptake of 99mTc-MDP. However, “hot area” or “cold area” can be visualized on both imaging modalities at the same lesion in this study. The process of osteolytic bone metastases formation is triggered by the interaction among tumor cells, bone marrow environment and bone cells (vicious cycle) [32]. The tissue component changes during the “vicious cycle” until bone destruction and structure absence. “Hot area” on both imaging modalities is possibly due to increased activation of osteolysis and osteogenesis at early stage, while “cold area” is possibly associated with bone structure resorption, destruction, internal necrosis at late stage of osteolytic bone metastasis. The CT information on SPECT-CT is important to distinguish malignant osteolytic bone destruction from benign ones when they demonstrate as “cold area” on both 99mTc-3P-RGD2 and 99mTc-MDP imaging. Thus, these two imaging modalities are potential to play complementary roles in reflecting pathophysiological status of osteolytic lesions. In future, further studies are needed to develop targeted therapies for the management of osteolytic metastasis using 177Lu and 90Y labeled RGD peptide.

99mTc-3P-RGD2 imaging showed significantly higher detective rate than 99mTc-MDP imaging based on visual and semiquantitive analysis. Such technique is potentially applicable for the detection of some unknown primary tumors and distant metastases.

We are grateful to Prof. Shuang Liu for his help in RGD dimer kit donation and Wei Gu, Muhong Guo for clinical data collection and follow-up.