Materials and Methods: Logistic regression was performed to investigate association between SNPs within STAT4 and PTPN22 gene and susceptibility to type 1 AIH. Generalized multifactor dimensionality reduction (GMDR) was used to screen the best interaction combinations among the 4 SNPs.

Autoimmune hepatitis (AIH) was a kind of chronic inflammation of the liver, hypergammaglobulinemia and autoantibodies production [1]. A recent study in pediatric patients reported an incidence of 0.4 case per 100 000 children [2]. Another study from Poland reported an incidence of 3 to 4 per 100 000 children [3]. This disease displays female predominance and is considered rare in childhood, although it may occur in very young children [4]. The pathogenesis of AIH was not well known, but could be influenced by both genetic and environmental factors [5]. Mutations in the human leukocyte antigen (HLA) region have been reported associations with some types of autoimmune diseases, including AIH [6, 7].

Signal transducer and activator of transcription 4 (STAT4) gene has important role in dendritic cells and macrophages, activated peripheral blood monocytes [8]. The association between STAT4 and some autoimmune diseases, including rheumatoid arthritis (RA) or systemic lupus erythematosus (SLE) has been reported in several previous studies [9, 10], and in a mouse model, STAT4 is considered important of Th1-dependent liver injury [11]. A recent study suggested that STAT4 polymorphism was positively associated with type-1 AIH. rs2476601 in PTPN22 was a missense single nucleotide polymorphism (SNP), which has been more studied previously [12], and has been reported associations with some types of autoimmune diseases, including RA and SLE [12–15]. A Japanese population base study [16] indicated that PTPN22 SNPs play an important role in the genetic resistance to autoimmune liver disease. In consideration of the limited number of study on association between STAT4 and PTPN22 gene and AIH risk, particularly in Children. In this study, we aimed to investigate the impact of STAT4 and PTPN22 gene SNPs, additional gene–gene interaction and haplotype combination on type 1 AIH risk based on Chinese Han population.

A total of 542 participants (98 boys, 444 girls) consist of 180 AIH patients and 362 normal participants were included in this study. The mean age of all participants is 8.1 ± 3.9 years. The clinical characteristics for cases and controls were shown in Table 1. The distribution of gender and the mean age were not significantly different between cases and controls. The mean of total Bilirubin was 3.87 ± 4.14 mg/ml, albumin was 3.89 ± 0.75 g/L, the rate of SMA and cirrhosis at entry were 56.7% and 30.6 respectively.

Table 2: Genotype and allele frequencies of 4 SNPs between case and control group

*Adjusted for gender and age. 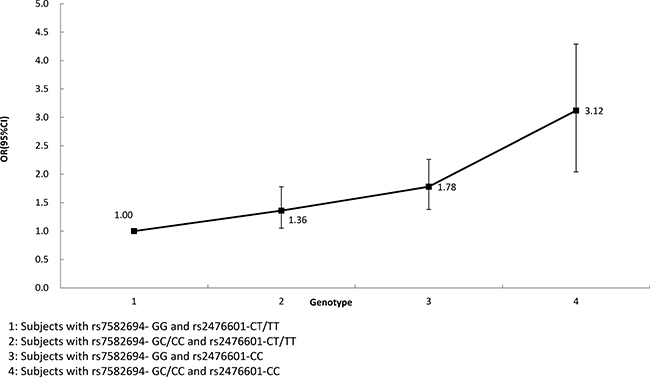 In this study, we detected the impact of STAT4 and PTPN22 gene polymorphisms on type 1 AIH risk in Chinese Han children; we found that rs7574865 and rs7582694 in STAT4 gene minor alleles are associated with increased type 1 AIH risk, but rs2476601 in PTPN22 gene minor allele is associated with decreased type 1 AIH risk. However, we found that PTPN22- rs2488457 was not significantly associated with type 1 AIH risk after covariates adjustment. Although several studies [9, 10, 17] have reported the relationship between STAT4 and PTPN22 gene SNPs and some others autoimmune diseases, to date, less study focused on relation of STAT4 and PTPN22 gene polymorphisms and type 1 AIH risk previously, particularly for Chinese children. The current study was the second study to investigating the association between STAT4 gene polymorphisms and susceptibility to type-1 AIH. Previously Migita et al. [17] suggested that STAT4 polymorphism was positively associated type-1 AIH risk. STAT4 was one type of critical transcription factor involved in the Th1/Th2 cytokine balance regulation [18]. The association between STAT4 and some autoimmune diseases, including rheumatoid arthritis (RA) or systemic lupus erythematosus (SLE) has been reported in several previous studies [9, 10]. Taylor et al. [19] concluded that STAT4 polymorphism played an important role on susceptibility to SLE. Another two Japanese studies [20, 21] also suggested that STAT4 is a common autoimmune diseases related genetic risk factor, including RA and SLE. A recent meta- analysis [22, 23] demonstrated a significant association between rs7574865- T allele within STAT4 gene and susceptibility to SLE, RA, T1D and so on. AIH pathogenesis were complex, study indicated that STAT4 represents a transcription factor, which involved in Th1 and Th17 differentiation [24]. STAT4 was an important genetic factor for IL-22 production, which plays a pathological role in IL-17-dependent hepatitis [25].

In terms of PTPN22, although previous study has showed no significant association between PTPN22 and AIH [26], to date, just one study [16] have been performed on relationship with type 1 AIH risk, this study suggested that PTPN22 gene SNP play a protective role on AIH risk. rs2476601 in PTPN22 was a missense SNP, which has been known as a factor associated with several autoimmune diseases, including RA and SLE [12–14], but this functional SNP was not associated with these autoimmune diseases in other studies [27–29].

The current study also has some limitations. Firstly, limited number of SNP in STAT4 and PTPN22 gene are included in current study, and in the future, more SNPs should be included in analysis. Secondly, some environment risk factors should be included in the gene–environment interaction analysis. In addition, the selection bias existed in the participant inclusion and exclusion, so the frequency for the T allele of rs2476601 was higher than that in HapMap data. Thirdly, the results obtained in current study should be checked in other populations, for example, the gender and race difference of this relationship. Lastly, we do not resolve the question of STAT4 SNPs and AIH, Which SNP is dominant or is this purely a haplotype association because of strong LD.

All participants in this study are consecutively recruited between January 2008 and November 2015 from the Third Affiliated Hospital of Sun Yat-sen University. All AIH patients had been diagnosed according to the scoring system of the International Autoimmune Hepatitis Group [30] and were classified as having type 1 AIH based on antibody profiles. Those patients with clinical evidence of cholangitis or non-alcoholic steatohepatitis, positive for hepatitis B virus (HBV)-surface antigen (HBsAg) or hepatitis C virus (HCV)-RNA, and with other causes of liver disease were excluded from the study, controls are those who are free of liver related diseases and matched by sex, age and ethnic background in the same regions and nearly 1:2 matched to cases on the basis of age (± 3 years), and control participants with other immune diseases were excluded. At last, a total of 542 participants (98 boys, 444 girls) consist of 180 AIH patients and 362 normal participants were included in this study (Figure 2). The mean age of all participants is 8.1 ± 3.9 years. The racial background of all individuals was Chinese Han. Data on demographic information, lifestyle and history of disease for all participants were obtained using a questionnaire administered by trained staffs, including data included coexisting autoimmune diseases, serum levels of alkaline phosphatase and bilirubin and serum levels of ALT, AST and so on. Both anti-nuclear antibodies (ANA) and anti-smooth muscle antibodies (ASMA) were measured by indirect immunofluorescence on HEp-2 cells and cut-off titers for positivity were 1:40. Written informed consent was obtained from all participants. The protocol of this study was approved by the Ethics Committee of the Third Affiliated Hospital of Sun Yat-sen University. 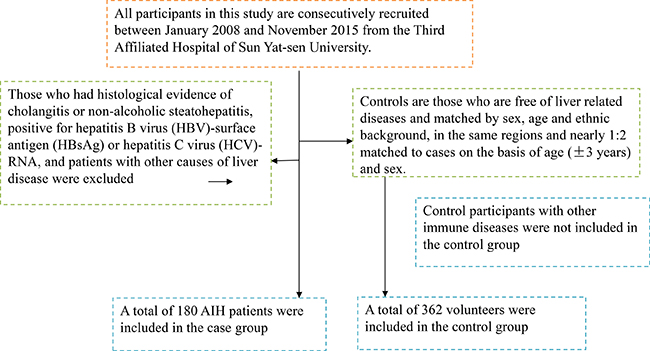 Figure 2: A flowchart on study population selection and exclusion.

We selected SNPs within the STAT4 and PTPN22 gene according to the following methods, including: 1) which have been reported associations with autoimmune diseases or risk factors of AIH; 2) minor allele frequency (MAF) greater than 5%. Taking into account the limitations of human, material and financial resources, a total of two SNPs of STAT4 gene and two SNPs of PTPN22 gene were selected for genotyping in the study: rs7582694 and rs7574865 within STAT4, rs2476601 and rs2488457 within PTPN22. Genomic DNA is extracted from EDTA-treated whole blood, using the DNA Blood Mini Kit (Qiagen, Hilden, Germany) according to the manufacturer’s instructions. The four SNPs were determined by the polymerase chain reaction–restriction fragment length polymorphism (PCR–RFLP) method [31]. PCR primer sequences for each polymorphism are shown in Table 5. The PCR reactions were carried out in a final volume of 20 μl containing: 10 × PCR buffer, 4.5 mMMgCl2 (Roche, Germany), 0.4 mM of each dNTP (Fermentas, Germany), 10 pmol of each primer, 32 ng template DNA, 1 U Taq DNA polymerase (Roche, Germany) and sterile distilled water up to 20 μl.

The means and standard deviations (SDs) were calculated for normally distributed continuous variables and were analyzed using Student’s t test or one-way analysis of variance. Percentages were calculated for categorical variables and were analyzed using χ2 test. Departure from Hardy-Weinberg equilibrium (HWE) in cases and controls was tested using Pearson χ2 goodness-of-fit test. Haplotype analysis and Pairwise LD analysis were investigated by using SNPStats (available online at http://bioinfo.iconcologia.net/SNPstats). Logistic regression was performed to investigate association between SNPs within STAT4 and PTPN22 gene and susceptibility to type 1 AIH. Bonferroni correction was applied in case of multiple comparisons using the formula pc = p/n (pc represents corrected value where n is the number of comparisons made). Generalized multifactor dimensionality reduction (GMDR) [32] was used to screen the best interaction combinations among the 4 SNPs, some parameters such as cross-validation consistency, the testing balanced accuracy, and the sign test were calculated. Permutation testing is also conducted to gain empirical P values of prediction accuracy as a benchmark based on 10,000 shuffles. A sign test or a permutation test (providing empirical p-values) for prediction accuracy can be used to measure the significance of an identified model.

The writing of this paper is supported by the Third Affiliated Hospital of Sun Yat-sen University. We thank all the partners and staffs who help us in the process of this study.

Science and Technology Projects Foundation of Guangdong Province (Grant No. 2014A020212120).