Tuberous sclerosis (TSC) is an inherited tumour syndrome caused by mutations in TSC1 or TSC2 that lead to aberrant activation of mTOR. Tumour responses in TSC patients to rapamycin, an allosteric inhibitor of mTOR, or its analogs are partial and reversible probably due to feedback activation of Akt. In this study, we examined the efficacy of GSK2126458, an ATP-competitive dual inhibitor of PI3K/mTOR, in comparison to rapamycin for treatment of renal tumours in genetically engineered Tsc2+/- mice. We found that both GSK2126458 and rapamycin caused significant reduction in number and size of solid renal tumours. GSK2126458 also significantly reduced the number and size of all lesions (cystic, papillary and solid) although to a lesser extent compared to rapamycin. GSK2126458 inhibited both PI3K and mTOR while rapamycin exerted stronger inhibitory effect on mTORC1 in renal tumours. Furthermore, GSK2126458 and rapamycin suppressed proliferation of tumour cells. Importantly, GSK2126458 increased apoptosis of solid tumours but rapamycin did not. Further investigations are therefore needed to test whether rapamycin in combination with GSK2126458 could promote apoptosis and thus improve therapy of TSC-associated renal tumours.

Tuberous sclerosis (TSC) is an inherited disease caused by mutations in TSC1 or TSC2 that lead to aberrant activation of mTOR and development of tumours in multiple organs. TSC patients frequently develop renal manifestations, usually multiple and bilateral angiomyolipomas (AML) that are the leading cause of adult deaths from the disease. Renal cysts are also commonly observed and renal cell carcinoma (RCC) develops in around 2% of TSC patients [1]. Treatment with the mTOR inhibitor rapamycin (sirolimus) or its derivative everolimus significantly reduces the size of renal AML in TSC patients [2–4]. Everolimus has also demonstrated clinical efficacy in TSC-associated renal carcinoma [5]. However, responses of AML and other TSC-associated tumours to these mTOR inhibitors are partial and tumours that initially respond to treatment usually regrow after drug withdrawal. Partial resistance to rapamycin or its derivatives is suggested to be associated with loss of negative feedback regulation that leads to increased phosphorylation and activation of AKT [6].

To prevent feedback activation of Akt, ATP-competitive dual inhibitors of PI3K/mTOR have been developed and used in clinical trials for cancer therapy [7]. GSK2126458 is a highly potent and orally bioavailable dual ATP-competitive inhibitor of PI3K and mTOR [8]. Preclinical studies suggest that GSK2126458 inhibits proliferation of a variety of cancer cell lines and tumours in xenograft mouse models with induction of apoptosis and attenuation of the PI3K/Akt/mTOR activity [8, 9]. A recent phase I clinical trial indicates that GSK2126458 is well tolerated in patients across multiple solid malignancies. Tumour responses and disease stabilization were documented in patients with several tumour types including bladder and renal cell carcinoma [10].

Tsc2+/- mice spontaneously develop various lesions in the kidneys including cysts, papillary adenomas, solid adenomas and carcinomas [11]. These lesions are associated with aberrant activation of the PI3K/Akt/mTOR signalling pathway [12]. In this study, we tested the efficacy of GSK2126458 compared to rapamycin for treatment of renal lesions in Tsc2+/- mice.

Activation of oncogenic pathways in renal tumours of Tsc2+/- mice

The kidneys of adult Tsc2+/- mice developed lesions including cysts, papillary adenoma, solid adenoma and carcinoma (Figure 1). Lesions varied in size from microscopic intraepithelial neoplasias to macroscopic carcinomas. Tumour cells were larger than adjacent normal cells and had hyper-chromatic enlarged nuclei. Lesions had aberrant activation of the mTOR complex 1 (mTORC1) and mTORC2 as evidenced by the increased phosphorylation of mTOR, Akt, PKCα, S6 and 4E-BP1 compared to the adjacent normal tissues (Figure 2). In addition to mTOR, Akt has many other substrates [13]. Akt substrates (RXXS*/T*) and Akt substrates (RXRXXS*/T*) were highly phosphorylated in renal lesions (Supplementary Figure 1). The MAPK pathway was also activated in these lesions as indicated by increased phosphorylation of RAF1 and Erk1/2 (Supplementary Figure 2). 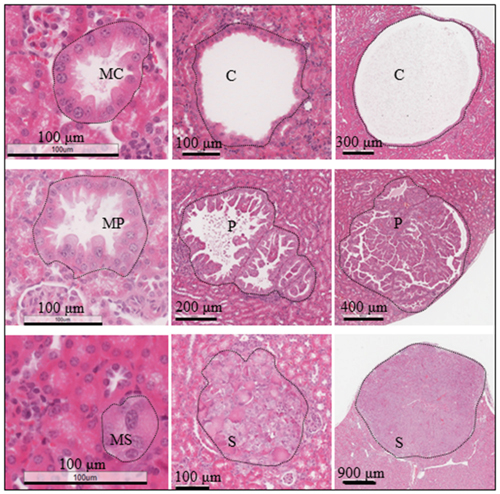 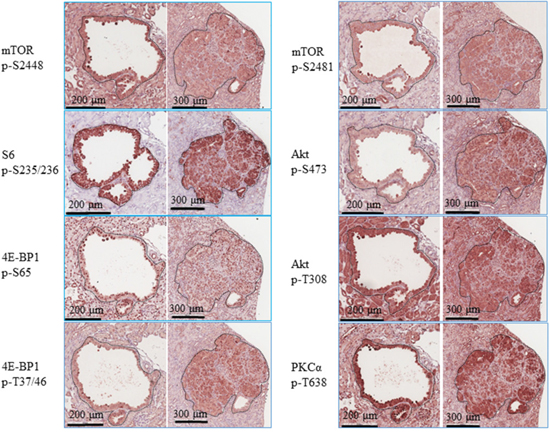 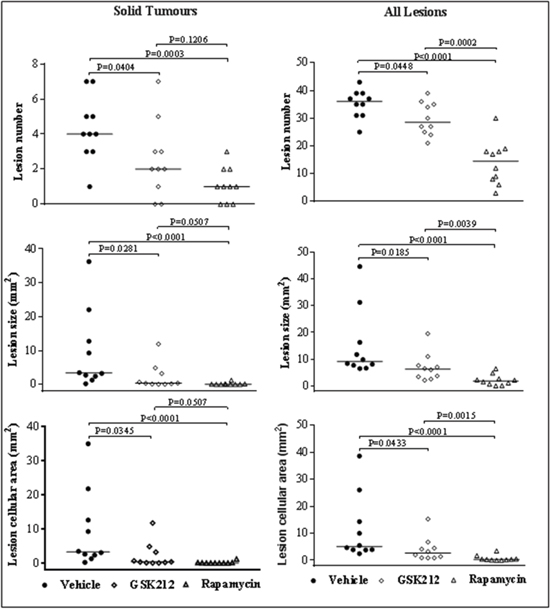 Figure 4: Effect of GSK2126458 and rapamycin on mTOR signalling of renal tumours in Tsc2+/- mice. Kidney sections prepared from 14 months old Tsc2+/- mice treated with vehicle, GSK2126458 or rapamycin were used for IHC analysis. Representative IHC-stained sections were presented to show phosphorylation of mTOR at S2481, S6 at S235/236 and Akt at S473 in renal tumours. Black lines are scale bars. 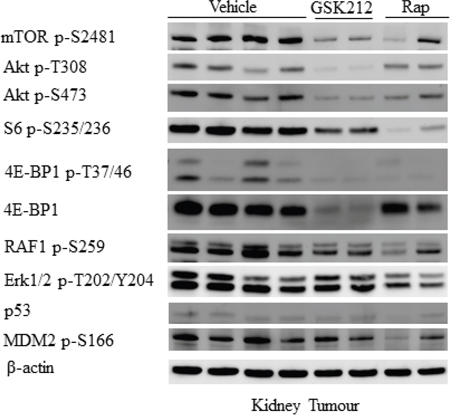 IHC-stained Ki67 was used to evaluate the effect of treatment on proliferation of renal tumour cells (Supplementary Figure 5). Ten fields (20x) from 10 solid tumours were selected randomly from each group and examined for quantification of Ki67-positive tumour cells using ImageJ. GSK2126458 and rapamycin reduced the median percentage of Ki67-positive cells from 18.13% to 5.82% and 2.07% respectively (Figure 6; Supplementary Table 3). Rapamycin inhibited proliferation of tumour cells to a greater extent than GSK2126458 (P<0.0001). 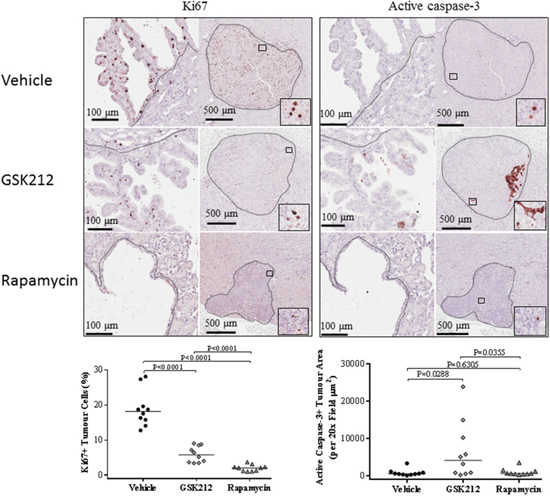 IHC-stained active caspase 3 was used to test whether treatment induced apoptosis in tumours (Supplementary Figure 6). Ten fields (20x) from 10 solid tumours were selected randomly from each group and examined for quantification of the area of active caspase 3-positive tumour cells using ImageJ. The total area of active caspase 3-positive tumour cells in each field is presented in Figure 6 and Supplementary Table 3. GSK2126458 significantly increased the median total area of active caspase 3-positive tumour cells (P=0.0288) but rapamycin did not. Similar results were observed when cleaved PARP (another apoptosis marker) was analysed by IHC (Supplementary Figure 7). To investigate mechanisms underlying increased apoptosis associated with GSK2126458 treatment, expression of p53 and phosphorylation of MDM2 at S166 were analysed by IHC. Renal lesions appeared to have a lower level of p53 and decreased phosphorylation of MDM2 in rapamycin treated mice compared to vehicle treated mice while the protein level of p53 and the phosphorylation of MDM2 appeared to be similar in lesions of GSK2126458 treated mice to those of vehicle treated mice (Supplementary Figure 8). Similar results were observed by Western analysis (Figure 5).

In this study, we investigated the therapeutic efficacy of GSK2126458 for renal tumours in Tsc2+/- mice in comparison to rapamycin. We demonstrated that GSK2126458 was effective for treating solid renal tumours. GSK2126458 has been used for treating xenograft tumours in immunocompromised mice and achieved significant therapeutic efficacy [8, 9]. We here used a genetically engineered Tsc2+/- mouse model that spontaneously develops various types of renal lesions and confirmed the anti-tumour efficacy of GSK2126458 for tumours in an organ-appropriate environment. No previous comparison of anti-tumour efficacy between GSK2126458 and rapamycin has been made in vivo. GSK2126458 has been recently reported to be well tolerated in patients treated for multiple solid malignancy types with tumour responses and disease stabilization being seen [10]. Eight percent of these patients suffered diarrhoea and effective GSK2126458 dose remains to be determined. NVP-BEZ235, another ATP-competitive dual PI3K/mTOR inhibitor, has been used to treat renal lesions in a Tsc2+/- mouse model on the mixed C57BL/6J:129S1/SvImJ background and appeared to be as effective as everolimus [14].

We found that GSK2126458 inhibited both mTORC1 and mTORC2 in all types of renal lesions in Tsc2+/- mice but the inhibitory effect of GSK2126458 on mTORC1was weaker than that of rapamycin. GSK2126458 reduced phosphorylation of Akt at T308 but rapamycin did not. It remains to be determined whether this reduction in Akt phosphorylation contributes to anti-tumour efficacy. GSK216458 has been reported to activate Erk1/2 in prostate cancer cells [15]. We did not observe increased activity of Erk1/2 in GSK2126458 treated renal lesions. In contrast, we found that the phosphorylation of RAF1 at S259, a part of the Erk1/2 signalling pathway, was reduced in GSK2126458 treated solid renal tumours.

We demonstrated that both GSK2126458 and rapamycin had anti-tumour efficacy by suppressing proliferation of tumour cells but suppression by rapamycin was much stronger than by GSK2126458, probably due to its inhibition of both mTOR and Erk/1/2 activities. We found that GSK2126458 promoted apoptosis in solid renal tumours. It may be of interest to determine the possible long term benefit after cessation of GSK2126458 treatment. Previous studies have documented an increase in apoptosis and an increased ratio of p53/MDM2 in cancer cells following treatment with rapamycin [18]. We did not find that rapamycin increased apoptosis but did observe that rapamycin reduced the protein level of p53 and the phosphorylation of MDM2 in solid renal tumours. Furthermore, we did not observe a significant change in the expression of p53 and phosphorylation of MDM2 after GSK2126458 treatment, suggesting an alternative mechanism of apoptosis caused by GSK2126458. An in vitro study suggested that GSK2126458 increased responses of tumours to everolimus treatment [19]. It may therefore be worthwhile investigating whether combination of GSK2126458 with rapamycin could improve anti-tumour therapy through increased tumour cell death.

Animal procedures were performed in accordance with the UK Home Office guidelines and approved by the Ethical Review Group of Cardiff University. Tsc2+/− BALB/c mice were described previously [11]. Tsc2+/- litter mates were randomly allocated into 3 groups of 10, balanced for gender and of the same age. Animals were treated with vehicle, GSK2126458 (2 mg/kg, MTD) and rapamycin (4 mg/kg) for 2 months from the age of 12 months via intraperitoneal injection 5 times a week. Animals were then sacrificed for assessment of tumour burden and analysis of protein expression and phosphorylation in normal tissues and tumour samples. GSK2126458 was purchased from Medkoo, Chapel Hill, USA and rapamycin from LC Laboratories, Woburn, MA, USA. GSK2126458 of 2 mg/ml and rapamycin of 2 mg/ml were prepared respectively in 2.5% PEG-400, 2.5% Tween-80 and 2.5% DMSO.

Assessment of tumour burden in the kidneys of mice was performed as described previously [20]. Mouse kidneys were fixed in 10% buffered formalin saline for 24 h. Fixed kidneys were processed and paraffin embedded. Six coronal sections of 5 μm were prepared at a 200 μm interval from both kidneys of each mouse. Kidney sections were haematoxylin and eosin (HE)-stained and scanned to create virtual HE slides using an Aperio system (http://www.leicabiosystems.com/?gclid=CNXN-8by4a%20UCFcINfAods3eg1w). Virtual slides were used for lesion quantification. Maximum cross-sectional whole area (i.e. including intracystic spaces) and cellular area of each renal lesion were measured, respectively, using ImageJ (http://rsbweb.nih.gov/ij). The assessment was conducted blindly with respect to treatment status. The total and cellular burdens of all lesions were estimated from total whole areas and cellular areas respectively of all lesions (cystic, papillary and solid), and the burden of solid lesions alone was estimated from the sums of their cross sectional areas.

The Mann Whitney test was used to compare groups for statistical differences. P<0.05 was considered to be statistically significant. Analyses were performed using GraphPad Prism 7.01.

We would like to thank Dr David Kwiatkowski for providing the Tsc2+/- mouse model. This project was supported by the Wales Gene Park, UK and the Tuberous Sclerosis Association, UK.

This project was supported by the Wales Gene Park, UK and the Tuberous Sclerosis Association, UK.