Mediastinal lesions across the age spectrum: a clinicopathological comparison between pediatric and adult patients

The objective of this study was to identify the differences in histopathological distribution and clinical features of mediastinal lesions (MLs) across the age spectrum in Chinese series of patients and to compare with the available literature. A total of 409 cases of MLs, including 137 pediatric and 272 adult patients from a single institution, was reviewed and categorized into groups according to age. Among the 409 cases, the age showed a bimodal distribution with an increased incidence of MLs among (< 10 year) and (60–< 70 year) age groups. Thymic lesions, neurogenic tumors, and cysts made up 57% of MLs among the 409 cases. A significantly higher frequency was found for neurogenic tumors, germ cell tumors, mesenchymal tumors, and lymphatic lesions, (p < 0.01) for all, in pediatric population compared to adults. On the contrary, frequencies of thymic lesions and metastatic carcinomas were significantly higher in adults compared to pediatric category, (p < 0.01) for both. Overall, 41.6% were asymptomatic, however, pediatric patients showed a significantly higher incidence of cough and fever, (p < 0.01) for both, and dyspnea (p = 0.02), than adults. Whereas adult subset showed a significantly higher incidence of chest pain (p = 0.02), or oppression (p < 0.01), than pediatric counterpart. In conclusion, the age spectrum was the factor that influenced the histopathological distribution and the clinical presentation of MLs in Chinese series of patients. Such differences might be considered in the differential diagnosis and therapeutic approach for adult as well as pediatric patients with MLs. Furthermore, our study was comparable to the literature in terms of MLs frequencies.

Mediastinal lesions (MLs) can develop from structures that are normally located in the mediastinum or that pass through the mediastinum during development, as well as from metastases of malignancies that arise elsewhere in the body. MLs span a wide histopathological and radiological spectrum, including any mass, benign or malignant, infectious or reactive, and they could occur throughout lifespan. The most frequent lesions encountered in the mediastinum are thymomas, neurogenic tumors (NTs) and benign cysts, altogether representing 60% of patients with MLs. Age-related differences of tumor biology, host characteristics, or treatment protocol exist in MLs. Histopathological distribution, location, symptomatology and prevalence of malignancy are different between adult and pediatric populations [1–6]. Because of the heterogeneity of MLs, descriptive data on age patterns and incidence trends of particular histopathological type are limited.

Age distribution and clinical features, together with their anatomic location from the mediastinum provide important diagnostic information for MLs. Davis et al, had demonstrated in a series of 400 consecutive patients with primary MLs that 50% of symptomatic patients had a malignant neoplasm before 1967 compared with 62% after that year [7]. Of note, a large percentage of MLs produce no symptoms and are found incidentally during chest radiograph or imaging studies of the thorax performed for other reasons [8]. The distinct clinical characteristics in MLs between children and adults are well reported, however, it is less clear whether the age spectrum has effects on the clinicopathological features.

Herein, we present the differences in histopathological distribution of MLs across the age spectrum in Chinese patients with comparison to the available literature, and characterize the clinical features in relation to age groups between pediatric and adult patient’s categories. 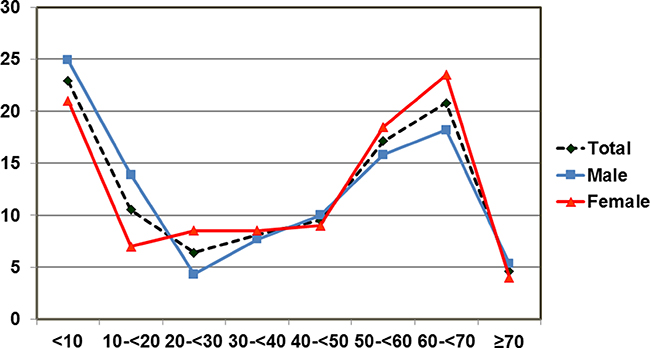 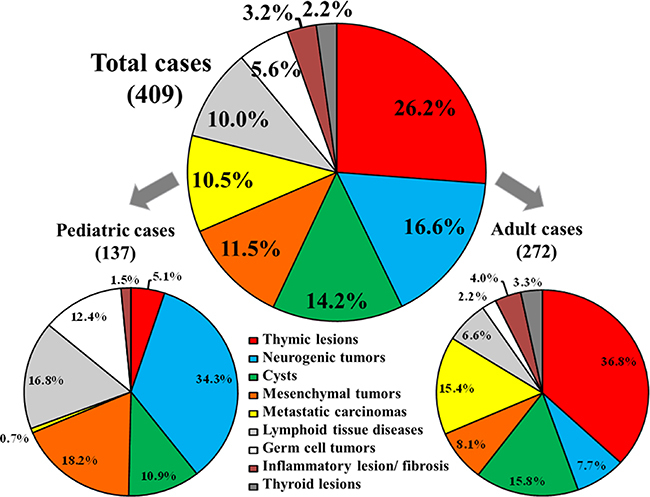 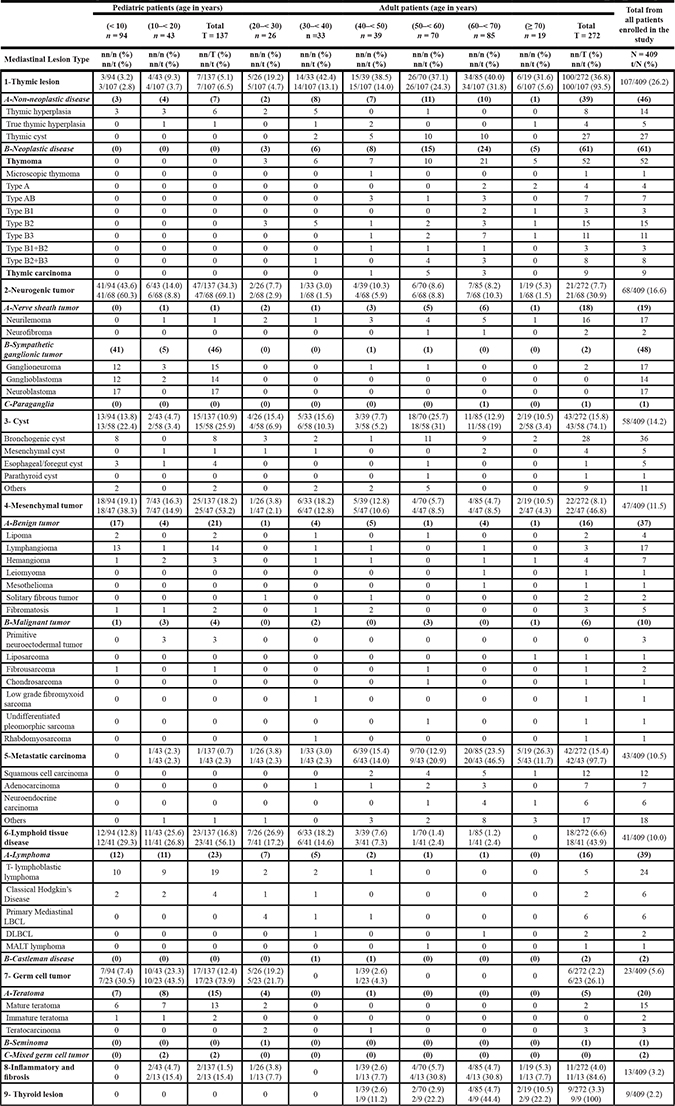 The 68 cases of NTs were classified into nerve sheath tumors, 27.9% (19/68), sympathetic ganglionic tumors, 70.6% (48/68) and paraganglia, 1.5% (1/68). Neuroblastoma occurred exclusively in those younger than 5 years, ganglioblastoma and ganglioneuromas occurred mainly in (< 10 year) age group, whereas, neurilemmoma (schwannoma) and neurofibroma occurred frequently in adult patients.

Mesenchymal tumors commonly presented with benign tumors, 78.7% (37/47), followed by malignant tumors, 21.3% (10/47). Of the 37 cases of benign tumors, lipoma and lymphangioma were predominantly seen in pediatric patients, while hemangioma, leiomyoma, mesothelioma, solitary fibrous tumors and fibromatosis were found commonly in adult patients. Of the 10 cases of malignant tumors, 3 cases of primary neuroectodermal tumors, were reported in pediatric patients of (10–< 20 year) group of age, whereas other types of sarcomas were predominantly diagnosed in adult patients.

Lymphoma accounted for 95.1% (39/41) of the lymphoid tissue diseases. T-cell lymphoblastic lymphoma represented 61.5% (24/39) and classical Hodgkin’s disease (HD) represented 15.4% (6/39), and were predominantly diagnosed in pediatric patients, whereas the primary mediastinal large B-cell lymphoma was the main subtype in adult patients of (20–< 50 year) groups of age, and represented 15.4% (6/39). Two cases of Castleman disease were documented in adult patients of the (30–< 50 year) of age.

In this report, we retrospectively reviewed 409 patients with MLs in a single Chinese institution. Adult cases were around double the pediatric cases, and as reported previously, the pediatric series showed male gender predominance [9]. This considerably high incidence of males is likely related to the high proportion of NTs, lymph tissue diseases, mesenchymal tumors and GCTs, which preferentially occur in males [10, 11].

TLs, NTs, and cysts made up 57% of our encountered MLs among the total 409 cases. A significantly higher frequency was found for NTs, GCTs, mesenchymal tumors, and lymphatic lesions, (p < 0.01) for all, in our pediatric population compared to adults. On the contrary, TLs and metastatic carcinomas were significantly higher in adults compared to pediatric age group, (p < 0.01) for both. Within the pediatric age group of (< 10 year), a higher proportion of MLs were found due to the increased cases of NTs (43.6%), and the pediatric NTs represented 69.1% of all the 68 cases of NTs from the total 409 patients. Whereas in adult cases, the peak incidence was found in the group of (60–< 70 year), which was made by the increased number of TLs and metastatic carcinomas.

NTs were the second MLs type encountered in the total series of our cases, 16.6%, similar to that reported in Japan 16.9% [6]. Pediatric category showed that NTs were the commonest MLs, comprised of 34.3%, in agreement with Azarow et al. with the frequency of 34% [5], as well as Simpson et al. [15] and Whooley et al. [12] of 24% (p = 0.07) and 50% (p = 0.17), respectively. Our figures of NTs in terms of order and frequency from total Chinese series were similar to that of total Japanese cases, and NTs were the commonest MLs in the pediatric subsets in both studies. However, our frequency of 34.3% among pediatric subset, was lower than that of Japan 46%, to reach a significant level (p = 0.04). Taken together, the higher frequency of ganglioneuroma in the Japanese pediatric group (more than double of our cases), and the definition of Japanese pediatric group below 15 years of age, could explain the significant difference. The two major categories of sympathetic nervous system and peripheral nerve sheath had a definite relationship with age. In our pediatric patients, the vast majority presented with the sympathetic ganglionic tumors in children (< 10 years), including neuroblastomas, ganglioneuromas, or ganglioblastoma, while infants mostly had neuroblastomas [7]. On the other hand, among adult category, NTs were the fifth most common MLs, similar in order of frequency to that of Japanese adults, with comparable figures, 7.7% to 11% (p = 0.11) [6] and to Azarow et al., of 12.3% (p = 0.10) [5]. In contrast to pediatric series, the frequency of nerve sheath tumors increased in adult patients, as reported previously [16]. Thus, age seems to be the most important clinical parameter for distinguishing between histopathological types and rate of malignancy in NTs [17].

The frequency of cystic MLs 14.2% in the total of our series was comparable to that reported in the literature 15–20% [1]. The prevalence of cysts in the mediastinum in adults was higher than that in children. We confirmed the previously reported higher frequencies of bronchogenic cysts than other types in our series, among mediastinal cysts, 62.1% (36/58), with a higher frequency in adults 77.8% (28/36) compared to pediatric counterpart 22.2% (8/36) [18].

Mesenchymal tumors occurred throughout childhood as well as adulthood. Lymphangioma was the type of benign tumors seen in children and predominantly in those younger than 3 years of age, 76.5% (13/17) [19]. The distribution pattern of some soft tissue sarcomas differed significantly between adults and children, primary neuroectodermal tumor was most common in children whilst other types of sarcoma were seen typically in adults [20, 21].

Among pediatric category, the higher frequency of malignancy 52.1% was reported in the first decade of life, however, among the whole age spectrum, the highest rate of malignant cases was reported in the 8th decade of life 57.9%. The mean frequency of the malignant cases was almost similar in both pediatric and adult categories (48.2% in pediatric cases) and (48.5% in adult cases), comparable to previous reports [5].

Overall, 41.6% (170/409) were asymptomatic, however, pediatric patients showed a significantly higher incidence of cough, dyspnea, fever and a lower incidence of chest pain or oppression than adult counterpart, as shown in Table 2, similar to previous reports [5–7, 32]. It might be that symptoms due to compression or direct invasion into an adjacent structure caused the high incidence of respiratory symptoms in pediatric population compared to the adult population. The underlying tumor subtypes might explain the differences; NTs, lymph tissue disease and GCTs peaked in incidence in pediatric group, which commonly presented with respiratory symptoms. Generally, large MLs, including malignant GCTs or lymphomas, tended to cause respiratory symptoms of dyspnea and chest pain regardless of the malignancy.

The limitation of this study is the number of cases from a single institution, which is relatively small to allow the detailed analysis. More detailed studies are needed to understand the MLs distribution in different age categories and its relation with clinicopathological features.

Cases were obtained from the files of a single institution (Chinese institution of Xinhua Hospital). A total of 409 cases with MLs were retrospectively reviewed between August 2012 and July 2016. Clinical data concerning age at presentation, gender, symptoms, treatment were retrieved from the medical records. We arbitrarily defined pediatric patients (children and adolescents) as < 20 years of age, and adults as ≥ 20 years of age. The patients were categorized into eight different age groups: (< 10 years), (10–< 20 years), (20–< 30 year), (30–< 40) year, (40–< 50) year, (50–< 60 year), (60–< 70 year), and (≥70 year) of age. Written informed consent was previously obtained from each patient and/or guardians according to the guidelines of the Declaration of Helsinki.

Hematoxylin and eosin-stained sections from routinely fixed, paraffin-embedded tissues were examined. Histopathological diagnosis was established according to the morphological and immunohistochemical evaluations. Data obtained were classified into different groups on the bases of histopathological classification of the MLs [34].

Our study demonstrated that age spectrum influenced the histopathological distribution and the clinical presentation in MLs in Chinese series of patients. Such differences should be considered in the differential diagnosis and therapeutic approach for adult and pediatric patients with MLs. Furthermore, our study was comparable to the literature in terms of MLs frequencies.

There was no grant for this work.