Gastric cancer is the second most common malignant disease and cause of cancer-related death worldwide, especially in developing countries [1]. Predicting clinical outcomes for gastric cancer patients can be challenging due to genetic and geographically-dependent differences in incidence, stage at treatment, and patient prognosis [2]. However, accurate prediction of prognosis is crucial for selecting therapeutic strategies and for effective communication between doctors and gastric cancer patients.

Generally, prognostic evaluations in gastric cancer are based mainly on the tumor-node-metastasis (TNM) staging system. However, due to constraints associated with maintaining its simplicity and uniformity, the TNM staging system does not take into account many essential variables, including patient characteristics, laboratory test results, and treatments administered, that can influence the survival of gastric cancer patients [3]. The TNM staging system is therefore limited in its ability to assess survival in these patients, and survival predictions can vary widely for each gastric cancer stage [4]. Nomograms have been increasingly used to more accurately predict individualized patient outcomes in a variety of cancers. However, few nomograms have been developed that predict clinical outcomes for gastric cancer patients.

Serum bilirubin, which is an end product of heme metabolism, was not thought to serve any physiological function. Nevertheless, recent studies have demonstrated that serum bilirubin has potent antioxidant, anti-inflammatory, and anticancer effects in colorectal cancer [5, 6]. The protective effects of serum bilirubin have been reported in lung cancer [7, 8], colorectal cancer [9], and breast cancer [10]. Additionally, decreased levels of albumin, a factor commonly used as an indicator of nutritional status, are associated with worse outcomes in gastric cancer patients [11].

Baseline characteristics for the two patient cohorts are summarized in Table 1. A total of 352 men and 127 women were prospectively enrolled in the training cohort. Of these patients, 180 (37.6%) had distant metastasis and 275 (57.4%) received chemotherapy. During the follow-up period, 298 (62.2%) patients died (median follow-up, 1156 days). The median values for TBIL, DBIL, IDBIL, and albumin were 10.1 μmol/L, 3.6 μmol/L, 6.3 μmol/L, and 37.1 g/L, respectively. An additional 299 patients were retrospectively enrolled in the validation cohort. Pathologic TNM staging distributions varied widely; 31 (10.4%) individuals had early gastric cancer, and 72 (24.1%) had node negative disease. Two hundred six had died (median follow-up, 989 days) during the follow-up period.

Patients received treatment for either curative or palliative purposes according to the Japanese Classification of Gastric Cancer Guidelines.

We first compared clinical characteristics of training and validation cohort patients. Patients in the two cohorts were similar with regard to all clinical characteristics except drinking (P<0.001) (Table 1), indicating that the cohorts were comparable. We then explored associations between TBIL, DBIL, IBIL, and albumin levels and clinical characteristics. X-tile software was used to determine the optimal cutoff values of 5.3 μmol/L for TBIL, 7.3μmol/L for DBIL, 6.7 μmol/L for IBIL, and 33.2 g/L for albumin based on OS in training cohort patients (Figure 1). Training cohort patients were then divided into high and low level groups based on these cutoffs. Lymph node metastasis (N2 and N3 stage) was more common in patients in the low TBIL group than in those in the high TBIL group (Table 2). In addition, markedly more patients in the high DBIL group had T4 and N3 stage disease compared to the low DBIL group (Table 3). T1 stage and N0 stage disease were more common in patients in the high IBIL group than in those in the low IBIL group (Table 4). Finally, patients in the high albumin group were younger and more likely to have T1-T2, N0, or M0 stage disease than those in low albumin group (Table 5). Similar results were obtained when validation cohort patients were divided into high and low level groups for each measure based on the same optimal cutoff values used for the training cohort (Table 2-5). 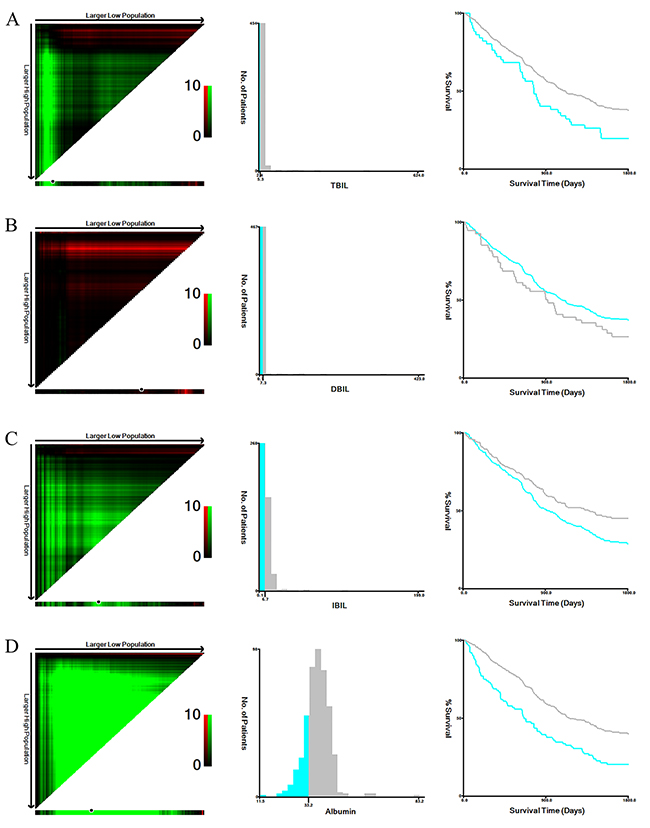 Five-year overall survival rates and univariate log-rank test results for clinical variables in the training and validation cohorts are shown in Table 6. Five-year OS was shorter in patients with low TBIL, IBIL, and albumin levels (P<0.01). Multivariate Cox regression analysis was then conducted for clinical features identified as significant in the univariate log-rank test. T, N, and M stages as well as TBIL and albumin levels were independently prognostic factors for OS in both the training and validation cohorts (Table 6).

To further assess the predictive ability of TBIL and albumin in gastric cancer patients, we used a nomogram based on the results of the univariate analyses to predict 5-year overall survival rates. Tumor grade, T, N, and M stage, treatment approach, and TBIL, IBIL, and albumin level were included in the nomogram for both the training (Figure 2A) and validation (Figure 2B) cohorts. The predictive models for both cohorts showed that treatment with palliative operation and advanced T, N, and M stage were poor prognostic indicators, while high TBIL and albumin levels were favorable factors. These findings were similar to those obtained previously in the multivariate Cox regression analyses (Table 6). Calibration curves for the nomogram in both cohorts revealed that the predicted 5-year OS values were similar to the actual 5-year OS (Figure 2C and 2D). 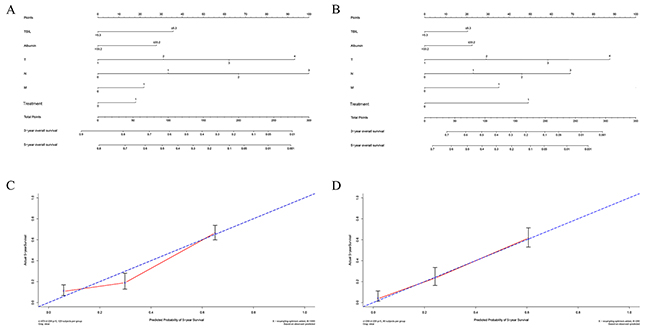 Figure 2: Nomogram for predicting gastric cancer outcomes. The sum of the points assigned to each factor by the nomogram is shown at the top of scale. Total point values were used to predict 5-year probability of death in the lowest scale. The c-indexes values for the training cohort (A) and the validation cohort (B) are 0.762 and 0.744, respectively. Calibration curves for 5-year OS, which are indicative of predictive accuracy, for the training cohort (C) and the validation cohort (D). The 45-degree reference line represents a perfect match between observed and predicted values.

Bile acid, which is the end product of cholesterol breakdown, exists in three forms in peripheral blood: TBIL, DBIL, and IBIL. Due to its anti-inflammation, antioxidant, and antiproliferation effects, bilirubin acts as a protective factor against carcinogenesis [12]. Decreased serum bilirubin is associated with an increased risk of cancer and with poorer outcomes [7]. Li et al. demonstrated that non-small cell lung cell cancer patients with higher pretreatment bilirubin levels had longer OS, DFS, and DMFS than those with lower levels [8]. Zhang and colleagues also found that high DBIL was strongly associated with worse outcomes after surgery in colorectal cancer patients with stage II and stage III disease in a retrospective study [9]; subsequent studies confirmed these results [13, 14]. However, the association between serum bilirubin levels and clinical outcomes in gastric cancer had not been examined. Here, we found that decreased serum TBIL was associated with advanced gastric cancer and poor prognosis, as is the case in other types of cancer [8, 9, 15]. Although training and validation cohort patients in our study differed with regard to drinking behavior, correlation analysis revealed no association between drinking status and serum bilirubin and albumin levels. Furthermore, serum TBIL and albumin were independent prognostic indicators regardless of drinking status both in the training and the validation cohorts. Taken together, these results suggest that serum bilirubin may have predictive value in gastric cancer.

Serum albumin, which is commonly used to evaluate an individual’s nutritional status, also has antioxidant effects and acts as a transporter of key nutrients. Serum albumin levels fall sharply in patients with advanced cancer due to malnutrition and systemic inflammatory responses to malignancy [16]. Malnutrition can also cause a series of detrimental clinical effects and thus reduce treatment response. Previous studies have assessed the association between serum albumin and survival in gastric cancer patients [17, 18]. Liu et al. reported that serum albumin was an independent prognostic factor for worse outcomes in 1320 gastric cancer patients after curative resection [19]. In a separate study of 320 gastric cancer patients, Liu et al. found that preoperative albumin, BMI, and triglyceride levels were more accurate for predicting survival than the TNM system [20]. Our findings strongly suggest that low serum albumin levels are a prognostic indicator of poor outcome in gastric cancer patients, which is consistent with previous findings for other malignancies [21, 22].

Although individual serum markers are useful prognostic factors in studies of cancer patients, single markers may not be adequate for predicting survival in a clinical setting. Combining several markers in a single index may improve their predictive power [23-25], and nomograms are a useful method for combining clinical characteristics to improve survival predictions for individual patients. In the current study, we constructed a nomogram to predict survival in training and validation cohort gastric cancer patients based on several clinical characteristics. The nomogram accurately predicted 5-year overall survival in the training and validation cohorts; Harrell’s c-indexes confirmed the accuracy of these predictions. Furthermore, serum TBIL and albumin levels were incorporated into the nomogram using a stepwise algorithm, and the predictive ability of the nomogram was confirmed using calibration curves. Additionally, a comparison of the predictive abilities of the constructed nomogram and the TNM staging system revealed that the nomogram was superior to TNM in both cohorts.

A major strength of this study is that it involved a relatively large number of gastric cancer patients undergoing treatment at a single center and that it included both prospective and retrospective cohorts. However, external validation studies should be performed to determine whether our results are applicable in other patient populations [26]. Another strength of this study is the use of X-tile software, which is a robust graphical tool [27], to determine the optimal cutoff values for serum bilirubin and albumin levels. However, some limitations should be considered when interpreting these results. For example, only pretreatment serum bilirubin and albumin levels were included in the present analyses, and it is possible that dynamic changes in serum bilirubin and albumin levels during the course of treatment might also influence outcomes in gastric cancer patients.

Regular follow-ups, which occurred every 3 months for the first 2 years and then every 6 months for 3 more years, began after the date of treatment and continued until September 30, 2016 or until patient death. Routine examination, gastroscopy, and imaging were performed at every visit. The follow-up period ranged from 91 to 3535 days, with a median of 1026 days. The study was approved by the Institutional Review Board of Nanjing First Hospital. Informed consent for use of their data was obtained from training cohort patients because of the prospective nature of the study.

Detection of serum bilirubin and albumin

HLS and SKW participated in the design of the study and performed the statistical analysis. YQP, KL, HXP, TX, XXC, XXH, ZJW and DW collected patient information and prepared figures. BSH and ZLN conceived of the study, participated in its design and coordination, and helped draft the manuscript. All authors read and approved the final manuscript.

This project was supported by grants from the National Nature Science Foundation of China (No. 81472027, 81501820) to SKW and YQP, the Jiangsu Provincial Medical Youth Talent to BSH (QNRC2016066) and YQP (QNRC2016074), the Nanjing Medical Science and Technique Development Foundation to BSH (No. JQX13003), and the Nanjing Medical University Science and Technique Development Foundation Project to ZLN (No. 2014NJMU038) and HLS (No. 2015NJMUZD049).