Tumor necrosis factor-alpha (TNF-α) is a multifunctional pro-inflammatory cytokine that plays an important role in cancer development. We performed a meta-analysis to assess the relationship between single nucleotide polymorphisms in the TNF-α promoter region (rs1800629 and rs361525) and susceptibility to squamous cell carcinoma (SCC), basal cell carcinoma (BCC) and melanoma. After database retrieval, article selection, data extraction, and quality assessment, 20 articles comprising 4865 cases and 6329 controls were included in this study. rs1800629 was associated with an increased overall risk of SCC, lung SCC, and oral SCC in the AA vs G and AA vs GG+GA genetic models (all OR>1, Passociation<0.05). No increased risk of skin SCC, skin BCC or melanoma was observed (all Passociation>0.05). Rs361525 was not associated with overall SCC risk in the allele, heterozygote, dominant, recessive, or carrier model (all Passociation>0.05). Begg’s and Egger’s tests (PBegg>0.05; PEgger>0.05) demonstrated there was no significant publication bias. These data indicate that the AA genotype of TNF-α rs1800629, but not rs361525, is associated with an increased risk of SCC, suggesting it could potentially serve as a prognostic marker for predicting SCC risk.

Skin cancer comprises cutaneous melanoma, skin SCC (SSCC), and skin basal cell carcinoma (SBCC) [10]. Allelic variants of TNF-α gene have been reported to contribute to the risk of skin cancer in certain populations. For example, the study by Rizzato et al. has indicated that TNF-α rs1800629 might affect the SBCC risk in Caucasian population [11]. The A allele or GA genotype of TNF-α gene rs1800629 polymorphism was also reported to influence the course of BCC in Polish population [12]. However, the role of TNF-α polymorphisms in skin cancer is still inconclusive. For example, Skov et al. reported that TNF-α release, but not rs1800629 polymorphism, was linked to the SBCC risk in Caucasian population [13]. To our knowledge, no meta-analysis has been previously performed to assess the link between TNF-α polymorphisms and the risk of skin cancer.

Therefore, in this study, we carried out a comprehensive systematic review and meta-analysis to determine the association of TNF-α polymorphisms and the risk of skin cancer and different SCC diseases.

Characteristics of studies included in meta-analysis

Six databases, including PUBMED, Web of Science (WOS), EMBASE, WANFANG, CNKI, and SCOPUS, were electronically searched on January 17th, 2017 to identify the eligible studies. The search details are shown in Supplementary Table 1. Flowchart of the search strategy and article selection for meta-analysis is shown in Figure 1. Briefly, 985 related articles were obtained from the above databases. After 241 duplicated articles were removed, 699 articles were excluded by screening the title and abstract. The eligibility of 45 full-text articles was then assessed, and 25 articles were excluded. The results are shown in Supplementary Table 2. Finally, 20 eligible articles with 4865 cases and 6329 controls were included for quantitative synthesis [1, 5–9, 11–24]. All selected articles met the inclusion and exclusion criteria. We used the Newcastle-Ottawa Scale (NOS) to assess the quality of the studies. As shown in Supplementary Table 3, the NOS scores of all studies were equal to or greater than 7, indicating a high quality. After covariate adjustment in logistic regression, the characteristics and genotype distributions of included studies are shown in Tables 1 and 2. 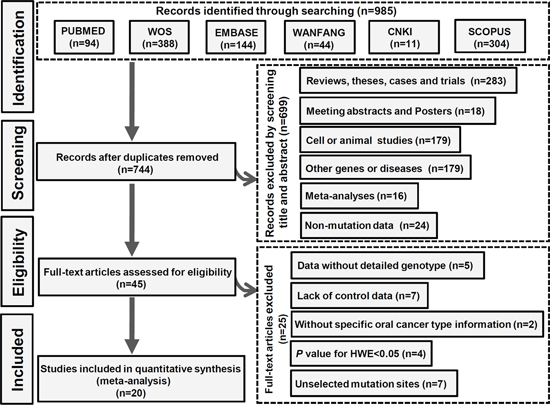 Figure 1: The selection process of the meta-analysis.

Table 2: The genotype data of studies included in meta-analysis

Association between TNF-α rs1800629 polymorphism and the risk of SCC

Table 3: Pooled analysis for the association between TNF-α rs1800629 polymorphism and the risk of SCC 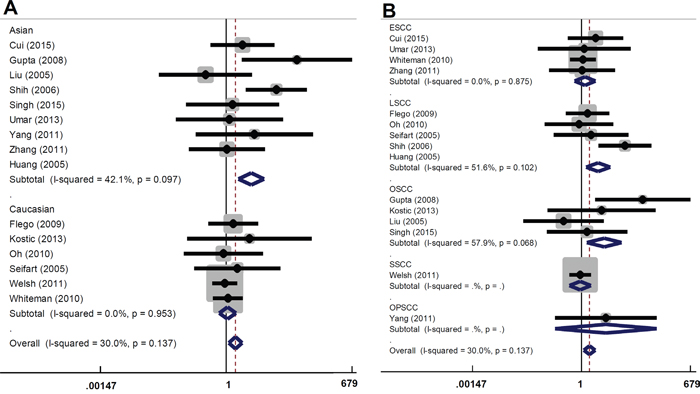 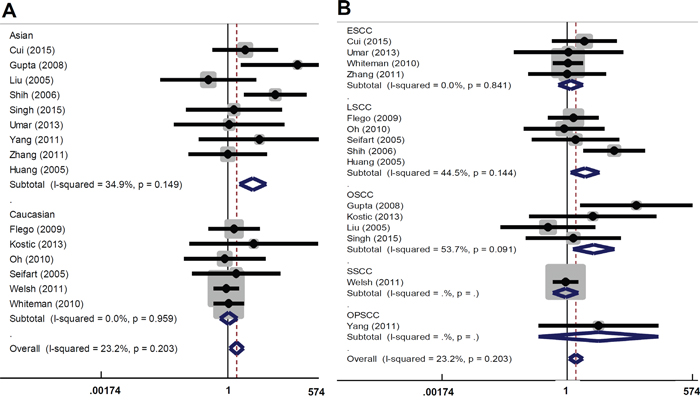 Association between TNF-α rs361525 polymorphism and the risk of SCC

Table 4: Pooled analysis for the association between TNF-α rs361525 polymorphism and the risk of SCC

We then performed meta-analysis of the relationship between TNF-α rs1800629 and the risk of skin cancer, including SSCC, SBCC, and melanoma. Seven studies comprising 2710 cases and 2786 controls were included [11–13, 15–17]. Data of pooled analysis indicated no significant difference under all genetic models (all Passociation>0.05, Table 5 and Supplementary Figure 2). Subgroup analysis (based PB and SBCC) also showed no significant difference (Table 5). However, only one case-control study was included in the subgroup analysis of melanoma [15] and SSCC [16] (Table 5). These data suggest that TNF-α rs1800629 polymorphism does not have a significant correlation with the risk of skin cancer.

Table 5: Pooled analysis for the association between TNF-α rs1800629 polymorphism and the risk of skin cancer

Table 6: The analysis of heterogeneity and publication bias

We also performed Begg’s and Egger’s tests to evaluate the potential publication bias among the included articles. The results indicate that publication bias can be ruled out for all comparisons (Table 6 and supplementary Figures 3-4; all PBegg>0.05, PEgger>0.05). Moreover, we conducted a sensitivity analysis and confirmed the stability of our results (Supplementary Figure 5 for rs1800629 and SCC risk; data no shown for others).

In the present study, 16 case-control studies of TNF-α rs1800629 polymorphism [1, 5–9, 14, 16–24] and 6 case-control studies of rs361525 polymorphism [7, 8, 14, 20, 21, 24] were included in the meta-analysis of TNF-α polymorphism and the risk of SCC disease. We found that an increased overall SCC risk was associated with the rs1800629 polymorphisms in the Asian population under AA vs GG, and AA vs GG+GA models, but not A vs G, GA vs GG, GA+AA vs GG, or carrier A vs G models. A significant difference between LSCC/OSCC risks and the rs1800629 polymorphism was found under the AA vs GG, and AA vs GG+GA models; this corresponds with previous data on the link of rs1800629 and the risk of upper aero-digestive tract or head/neck SCC [25, 26]. However, in 2013, Chen et al performed a meta-analysis to analyze the association between rs1800629 and oral cancer, and observed a negative association between rs1800629 and OSCC [27]. Different selection criteria may contribute to this discrepancy. In our meta-analysis, two studies were excluded due to the requirement of Hardy-Weinberg equilibrium (HWE) or genotype data [28, 29]. Regarding the ESCC risk and rs1800629 polymorphism, the negative result was found under all genetic models, which was in line with the data of Luo et al [30]. The rs361525 allele was reported to be significantly increased in healthy controls compared with cancer patients, indicating a protective function [31]. Here, no significant difference was detected for rs361525 and overall SCC risks under all genetic models, which was partly in accordance with the data of Gao et al regarding head and neck SCC [26] and Zhou et al for overall cancer [32]. In addition, seven case-control studies in Caucasian population were included for the analysis of skin cancer [11–13, 15–17]. We failed to observe a significant association between TNF-α rs1800629 and skin cancer. In 2011, Nan et al also did not find any association between TNF-α gene variants and skin BCC or SCC in the Genome-Wide Association Studies (GWAS) from 2045 cases and 6013 controls of European population [33].

Although our results were validated by Begg’s and Egger’s tests, and by sensitivity analysis, the limitations in our meta-analysis should also be addressed. (1) Due to the limited number of studies published to date, only the common genetic polymorphisms of TNF-α, including rs1800629 and rs361525, were chosen. In addition, small sample size and/or limited genotype data in eligible articles affected our analysis. For example, there are two case-control studies of the association between TNF-α rs1800629 and melanoma risk [15, 34]. However, one study was excluded due to the departure of HWE [34]. The frequency data of GA+AA combined genotype and GG genotype were extracted in one OSCC study [24]. (2) A considerable heterogeneity was observed in the meta-analysis of rs1800629/rs361525 and the SSC risks. SCC has many different etiologies, and stratified analyses by every SCC disease type were not performed. The variations of clinical characteristics, ethnicity, geographical location, habits, gender, age and population feature were not fully considered. In spite of the use of random-effect model, a limited number of studies was included in the subgroup analysis. For example, only one case-control study was included for the rs1800629 and the susceptibility to a specific SCC disease, including SSCC [16] and OPSCC [21]. The subgroup analysis of LSCC and rs361525 was based on only 2 case-control studies [14, 20], and showed a positive correlation under A vs G model, GA vs GG model; GA+AA vs GG, and carrier A vs G model. It is possible that the GA genotype of rs361525 is associated with the decreased risk of LSCC. However, well-powered studies and stratified analyses by more factors are required to confirm our findings.

TNF-α is an important multifunctional pro-inflammatory cytokine, which is closely linked to the occurrence, progression, metastasis, prevention and therapy of many types of human cancer [35–37]. Alterations in TNF-α gene expression or TNF-α cytokine release lead to a variety of cancers [2, 38]. Genetic variation has been considered as a disease susceptibility or resistance factor [2]. The rs1800629 G/A polymorphism, located in the promoter region (-308 site) of human TNF-α gene, can lead to the substitution from G common allele to A rare allele [2]. In vitro experiments showed that the “A” rare allele of rs1800629 could increase TNF-α transcription [39, 40]. The frequency of “A” allele also positively correlates with high TNF-α levels in patients with oral cancer [28]. TNF-α rs1800629 was found to be positively associated with distant metastases of triple negative breast cancer patients [36]. However, no association was found between rs1800629 and TNF-α gene expression in gastric cancer patients [41, 42]. Here, we observed a positive correlation between the AA genotype of rs1800629 and the risks of LSCC/OSCC. However, we did not find any significant association between the A allele and the SCC risks. It is possible that the “A” rare allele functions in an allele dosage-dependent manner. TNF-α was found to increase the efficiency of chemotherapy and radiotherapy against breast cancer cells [43]. The carriage of the A rare allele of rs1800629 may be involved in this process, through inducing TNF-α transcription and protein expression. It may be meaningful to analyze the effect of combined mutations of TNF-α and other genes, including TNF-beta and interleukin-6, on the carcinogenesis and SCC cancer therapy, since this may lead to the discovery of potential novel biomarkers for SCC.

In conclusion, our meta-analysis indicates that the AA genotype of TNF-α rs1800629 polymorphism may serve as a prognostic biomarker for SCC, especially for LSCC and OSCC in the Asian population. The rs361525 polymorphism does not seem to be a genetic risk factor for SCC. In conjunction with other studies, these results provide a scientific support for the prognostic value of TNF-α rs1800629 polymorphisms in predicting the SCC risk.

The related articles published before January 17th, 2017 were searched in the electronic databases, including PUBMED, WOS, EMBASE, WANFANG, CNKI and SCOPUS, without any language restrictions. The present meta-analysis followed “Preferred Reporting Items for Systematic Reviews and Meta-Analyses” (PRISMA) [44], as shown in Supplementary Table 4.

Mantel-Haenszel statistics was used to estimate the values of pooled odd radios (ORs) and 95 % confidence intervals (CIs); Passociation value less than 0.05 was considered statistically significant. Six genetic models, including allele, homozygote, heterozygote, dominant recessive, or carrier models were used. Cochran Q statistic and I2 test were carried out to assess the potential heterogeneities between studies. When Pheterogeneity value of Cochran Q statistic > 0.05 or I2 value <50 %, the fixed-effect model was used. Otherwise, random-effect model was applied. To investigate the potential sources of heterogeneity, sensitivity analyses and subgroup analyses based on SCC disease type, ethnicity or source of controls were performed. Begg’s test with pseudo 95 % confidence limits and Egger’s test were also conducted to evaluate the potential publication bias. Stata/SE 12.0 (College Station, TX, USA) software was used for all statistical analyses.

This study was conceptualized and designed by Ning Liu. Ning Liu, Guang-Jing Liu and Juan Liu extracted and analyzed the data. The manuscript was written by Ning Liu. All authors approved the final manuscript.