Increased levels of LAPTM4B, VEGF and survivin are correlated with tumor progression and poor prognosis in breast cancer patients

Objective: This study explored the relationships among the expression of LAPTM4B, VEGF, and survivin and clinicopathological characteristics and prognosis in breast cancer patients.

Methods: The expression of these three molecules in 110 stage I-III breast cancer patients with clinicopathological and follow-up data was detected via immunohistochemistry. Kaplan-Meier and Cox proportional hazard regression analyses were performed to assess the prognostic significance of these markers in breast cancer. Moreover, expression levels of these markers were evaluated in 5 breast cell lines via Western blot analysis.

Results: LAPTM4B, VEGF, and survivin were over-expressed in breast cancer specimens and highly expressed in MDA-MB-231 cells. VEGF and nuclear survivin expression was significantly correlated with LAPTM4B expression, and high levels of all three were associated with a tumor size >2cm, TNM stage II+III and lymph node metastasis, which had worse impacts on overall survival and progression-free survival in breast cancer patients. A multivariate Cox analysis identified LAPTM4B over-expression as an independent prognostic marker in breast cancer.

Conclusions: These findings suggest that LAPTM4B, VEGF, and nuclear survivin expression are significantly correlated in breast cancer, which may be predictive of prognosis as well as effective therapeutic targets for new anticancer therapies.

Breast cancer is one of the most common cancers among women, and epidemiological statistics show that the incidence of this disease and its associated mortality are increasing yearly [1]. The identification of key genes that determine progression and metastasis in breast cancer is urgently needed for early diagnoses and molecular targeted therapies.

Lysosome-associated protein transmembrane-4 beta (LAPTM4B), a novel oncogene that belongs to the mammalian 4-tetra-transmembrane spanning protein superfamily, was initially identified in human hepatocellular carcinoma [2, 3]. Previous studies showed that LAPTM4B-35 activity was elevated in various malignant tumors, which was associated with poor prognosis [4–6]. Moreover, it was indicated that LAPTM4B could increase the proliferation and metastasis of tumor cells, reduce apoptosis, and assist drug resistance, which involved in activated PI3K/AKT and Ras-MAPK signaling pathways [7].

Angiogenesis is an important feature of carcinogenesis, progression and metastasis in many human malignancies. Vascular endothelial growth factor (VEGF) is thought to be a major mediator of angiogenesis that promotes the proliferation of tumor cells and boosts invasion and metastasis via the activation of the PI3K/AKT pathway [8–10]. The vascular density of tumors, including breast cancer, has been proven to be closely correlated with prognosis [11].

Survivin is a 16.5-kDa intracellular protein that is a well-known member of the inhibitor of apoptosis protein family, and its expression is elevated in the majority of tumors [12]. It potentially facilitates cell cycle processes and cell division and reduces apoptotic indices, which is strongly related with poor prognosis in breast cancer [13, 14]. Transcription from the survivin gene locus gives rise to 5 splice variants [15]. The relation of the splicing variants with prognosis is currently unclear.

Interestingly, a previous study revealed that tissues with elevated expression of LAPTM4B had significantly more new capillary blood vessels than tissues with reduced expression in a mouse xenograft model of liver cancer, indicating that LAPTM4B over-expression might be significantly associated with increased angiogenic activity [16]. Recent studies have also shown that silencing LAPTM4B remarkably reduces the expression of VEGF in HeLa cells [17] and that increased LAPTM4B-35 combined with positive VEGF expression might serve as a new biological marker to predict outcomes in cervical carcinoma [18]. In addition, it has been proven that the upregulation of LAPTM4B-35 promotes the activation of AKT and Bad, which would maintain cell survival [16].

The correlations among LAPTM4B, VEGF, and survivin have not been investigated in breast cancer. Therefore, we performed a retrospective study including 110 breast cancer patients who underwent surgical resection, primarily exploring relationships among the expression of these three markers, clinical variables and survival.

Expression of LAPTM4B, VEGF, and survivin

Statistical analyses showed that the expression of these three markers was significantly elevated in breast cancer specimens (P<0.05) (Table 1). As shown in Figure 1a-1k, LAPTM4B and VEGF protein staining were localized in the cytoplasm. Survivin staining differed among the cases: 63 cases (57.27%) showed expression only in the nucleus, 21 (19.09%) only in the cytoplasm, and 17 (15.45%) in both the nucleus and cytoplasm. Additionally, high VEGF and nuclear survivin protein expression were linearly correlated with that of LAPTM4B (P<0.001), as shown in Table 2. 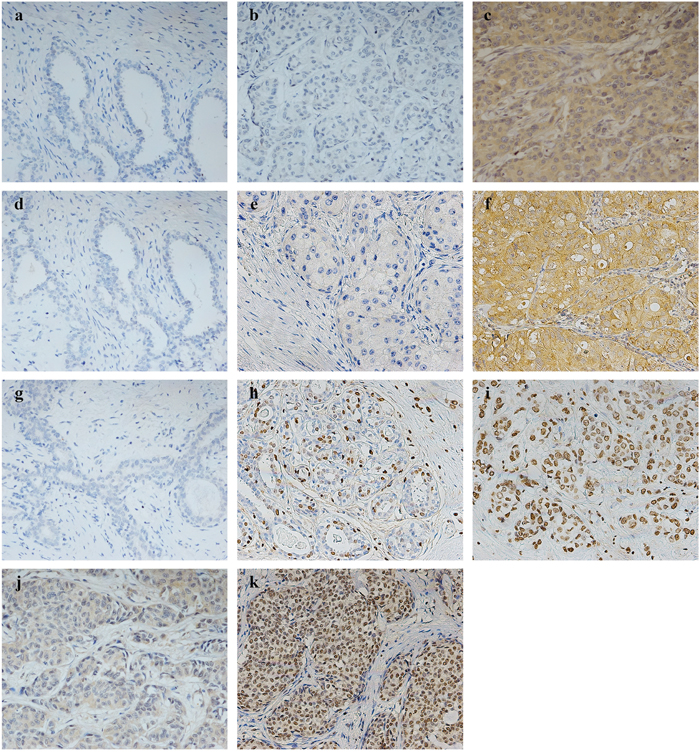 Figure 2: LAPTM4B, VEGF, nuclear and cytoplasmic survivin protein expression in breast cell lines by Western blot analysis. Protein samples were obtained from 5 breast cell lines (MDA-MB-231, ZR-75-1, T47D, MCF-7 and MCF-10A). (a) β-Actin was used as an internal control for the total protein. High expression of LAPTM4B, VEGF and survivin was detected in MDA-MB-231 cells. (b) Histone H3 and β-Actin were used as an internal control for the nuclear and cytoplasmic protein samples, respectively. High levels of survivin were expressed in the nuclear protein of MDA-MB-231 cells.

As shown in Table 3, high levels of LAPTM4B, VEGF, and nuclear survivin were found in cases where factors related to tumor progression were present, such as tumor sizes >2 cm, TNM stage II+III and lymph node metastasis. Moreover, there was a significantly positive correlation between LAPTM4B and VEGF expression levels and the probability of tumor-associated venous thrombus (P=0.012 and P<0.001, respectively).

Table 3: Associations between the expression levels of LAPTM4B, VEGF and survivin and clinicopathological factors in 110 breast cancer patients

As shown by the survival analyses, death and recurrence occurred in 12 (10.91%) and 23 cases (20.91%), respectively. The Kaplan–Meier and log-rank tests showed that tumor sizes >2 cm and lymph node metastasis were correlated with poor overall survival (OS) and progression-free survival (PFS) in breast cancer (Table 4; Figures 3 and 4). A more advanced TNM stage was closely associated with a significantly worse PFS. The univariate model indicated that OS and PFS were significantly lower in cases with elevated LAPTM4B, VEGF, and nuclear survivin levels than in cases with lower levels of these molecules. 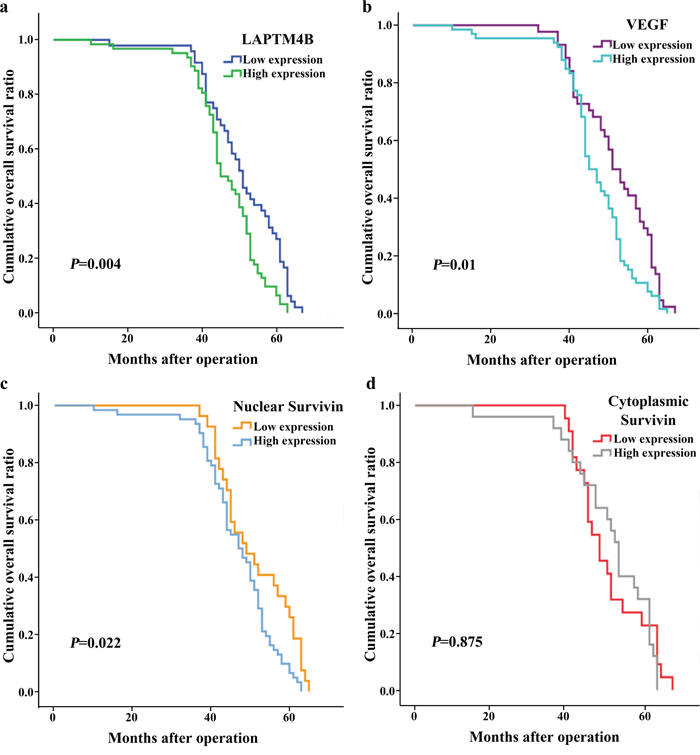 Figure 3: Kaplan-Meier curves for overall survival in 110 patients with breast cancer. High expression of LAPTM4B (a), VEGF (b) and nuclear survivin (c) was significantly associated with poor overall survival (P = 0.004, 0.01 and 0.022). 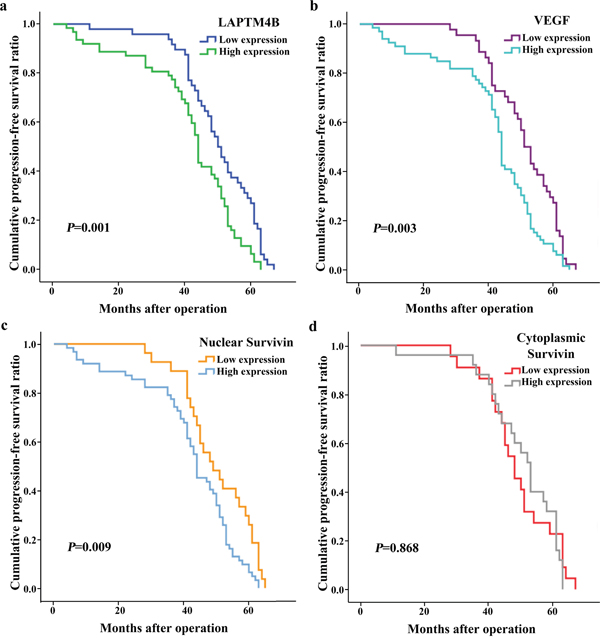 The multivariate analysis showed that high levels of LAPTM4B were an independent prognostic marker for both OS and PFS in breast cancer (Table 5; P=0.007 and P=0.002, respectively).

Despite the fact that an increasing number of genes have been discovered and various targeted therapies have also been developed in recent years, the survival rate for breast cancer is not satisfactory [19]. Thus, it is of great importance to identify biomarkers that are effective in helping to improve the prognosis in breast cancer.

A number of studies have shown that the proliferation of cells overexpressing LAPTM4B is closely correlated with tumor progression and metastasis [20, 21]. In our study, increased LAPTM4B expression was strongly associated with prognosis-related features, including tumor size, TNM stage and lymph node metastasis. Further analysis revealed that breast cancer patients with high levels of LAPTM4B protein expression had worse OS and PFS rates.

Our study found that the relationship between VEGF and nuclear survivin expression levels and the expression of LAPTM4B was remarkable. Furthermore, several reports have shown that VEGF could stimulate survivin expression via the PI3K/AKT pathway [22]. This up-regulation of survivin was found to enhance tumor angiogenesis mediated by VEGF [15, 23], suggesting the need for further research into the clinical relevance of these three molecules.

In a further step, strategies should be developed to determine whether the detection of LAPTM4B in combination with other molecules is of diagnostic and prognostic value in assessing breast carcinoma cases. Tang et al. examined LAPTM4B and CD34 proteins in non-small cell lung cancer, and their results revealed that LAPTM4B might promote tumor progression by inducing tumor angiogenesis [24]. Meng et al. indicated that the downregulation of LAPTM4B suppressed tumor migration and invasion and significantly decreased VEGF expression. Subsequently, they verified that the coexpression of LAPTM4B and VEGF resulted in poor prognosis for cervical cancer [17, 18]. Consistent with these findings, our results show that high levels of LAPTM4B and VEGF led to poor clinical outcomes with regard to OS and PFS.

Li et al. revealed that nuclear survivin levels might predict poor survival in breast cancer [25]. The present study indicates that survivin expression is predominantly nuclear rather than cytoplasmic [26], which is line with the majority of previous results. Interestingly, a few reports have indicated that the expression of survivin is nearly equivalent in the nucleus and cytoplasm [27] or only occurs in the cytoplasm [28], which might be attributed to differences in reagents, tissues and clinical stages. In our studies, we separately analyzed the expression of nuclear and cytoplasmic survivin. According to the statistical analyses, nuclear survivin protein expression was dramatically associated with tumor progression and poor survival. Researchers have found LAPTM4B-35 accelerates tumorigenesis in transgenic mice by upregulating the antiapoptotic molecule Bcl-2 and downregulating the proapoptotic molecule Bax. However, the expression of survivin in Ad-AE-infected cells was not altered [16]. Hence, the relationship of the subcellular localization of survivin with other molecules should be further investigated as a greater understanding of this relationship could improve prognostic assessments and individualized therapies.

In conclusion, our findings indicate for the first time that LAPTM4B, VEGF, and survivin protein expression is significantly associated with various clinicopathological characteristics and prognosis in breast cancer patients. In particular, the relation of VEGF and survivin protein levels with the expression of LAPTM4B indicates that they could have clinical potential as promising prognostic markers to identify individuals with poor outcomes and may be regarded as therapeutic targets for breast cancer. However, the limitations in this study included the small sample size and its retrospective nature, such as the limited follow-up time, which could be why the expression of VEGF and survivin was not linked to OS and PFS in the multivariate analysis.

Specimens were collected from 110 breast cancer patients with stages I-III and 10 patients with benign breast tumors who underwent surgical resection at the Beijing Cancer Hospital between January 2011 and July 2013. All patients provided written informed consent, and none of the patients received chemotherapy, immunotherapy, or radiotherapy before surgery. The Ethics Committee of Beijing Cancer Hospital approved this protocol. All patients with breast cancer were followed-up for the survival analysis until September 2016 (median, 49 months; range, 10–67 months).

Paraffin-embedded samples were cut into four-micrometer sections and stained with hematoxylin and eosin for tumor confirmation. Selected sections were immersed in a retrieval buffer solution for antigen recovery and incubated with a polyclonal rabbit anti-LAPTM4B antibody (dilution 1:200, bs-6542R, Bioss, USA), a polyclonal rabbit anti-VEGF antibody (dilution 1:150, ZA-0509, ZSGB, China) and a monoclonal mouse anti-survivin antibody (dilution 1:2000, produced by our lab) overnight at 4°C. Finally, the slides were stained and mounted. Negative controls were provided by replacing the primary antibodies with normal goat serum.

Each patient was scheduled for an examination, which included a physical examination, blood analysis, and computed tomography analysis. Tumor progression was based on clinical, radiological or histological diagnosis, and the site and time of tumor progression were both recorded. Follow-up was performed until September 2016 for 110 patients.

SPSS 18.0 software was used to perform the statistical analyses, and χ2 tests were used to evaluate the associations between the three biomarkers and the clinicopathological characteristics. The follow-up data was analyzed using the Kaplan–Meier method and Cox regression tests. P<0.05 was considered statistically significant.

We would like to thank all people who participated in the study.

This work was supported by the National Natural Science Foundation of China (No. 81572910).