The tumor microenvironment plays very important roles in the development and progression of cancer. Cancer tissues consist of various cells include cancer cells, fibroblasts, endothelial cells, pericytes, immune cells and various bone marrow-derived progenitor cells [1–2]. Fibroblasts are the most enriched cells in tumor stroma. The activated cancer-associated fibroblasts (CAFs) in the cancer niche build a permissive and supportive microenvironment for tumor development. Fibroblasts play important roles in cancer progression including metabolism, metastasis, proliferation, anti-apoptosis, angiogenesis and chemo-resistance by interaction with cancer cells or other cells [3–5]. Fibroblasts could affect behaviors of cancer cells by activating signal pathways, microRNAs (miRNAs), and soluble molecules and so on.

MiRNAs are a type of non-coding small RNA molecules that negatively regulate gene expression at a posttranscriptional level by binding to the 3′UTR of its target genes [6]. More and more research focus on the roles of miRNAs in fibroblasts [7–9]. Fibroblasts secrete a variety of chemokines, growth factors, cytokines, which can be regulated by miRNAs [6–9]. Down-regulation of miR-149, miR-21, miR-409, miR-26b, miR-205, miR-31 and up-regulation of miR-34b and miR-34c expression could transform resident fibroblasts to carcinoma associated fibroblasts (CAFs) [10–17]. The reported miRNAs could regulate gene expression in fibroblasts and then control cancer development and progression by regulating cytokines or chemokines. Chemokines are critical signaling mediators, which involve in the communication between the cancer cells and fibroblasts through binding to their receptors [18]. Cell survival, proliferation, stem cell properties, ECM attachment, adhesion, metastasis in tissues or to other organs including proteolysis of the basement membrane, locomotion and colony formation will be changed according to the signals from the CAFs [19].

Our previous screening data showed that miR-29b is one of the significant down-regulated miRNAs in CAFs. Our study is to determine how miR-29b influences chemokine secretion of CAFs and its role in the regulation of proliferation, drug resistance and metastasis of breast cancer cells.

CAFs and normal fibroblasts (NFs) were isolated from the tissues of breast cancer. α-SMA is the most common marker of CAFs, and it was significantly up-regulated in CAFs than in NFs using immunofluorescence assay (Figure 1A). The markers of CAFs including MCT1, MCT4, α-SMA and FSP1 were examined by western blotting. It was found that MCT1, MCT4, α-SMA and FSP1 protein levels were higher than them in NFs, but CAV-1 was significantly down-regulated in CAFs (Figure 1B). Cell proliferation was assayed for SKBR3 with conditioned medium (CM) from NFs or CAFs treatment by colony formation assay (Figure 1C). The results indicated that CAFs were different from NFs, and CAFs showed the features of the activated fibroblasts. It was also shown that CAFs promoted cell migration of SKBR3 cells (Figure 1D–1E). 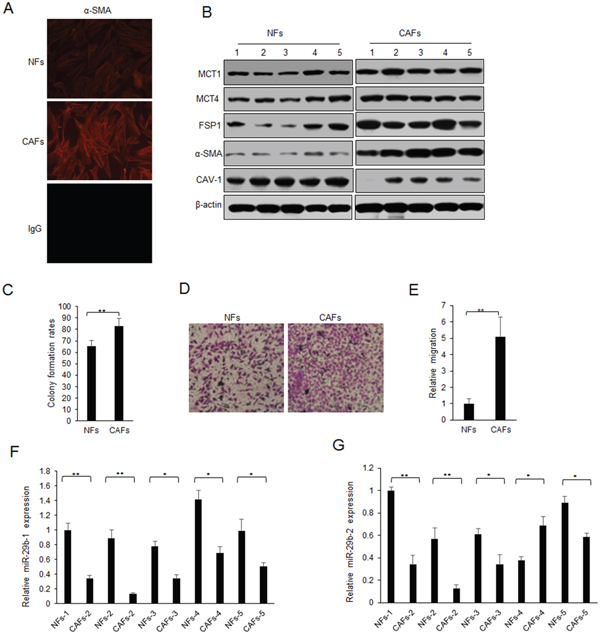 To know the role of miRNAs in CAFs, miRNA array was performed to find the significant miRNAs. MiR-29b is one of the down-regulated miRNA in CAFs (Supplementary Table 1). It was also found that miR-29b including miR-29b-1-5p (miR-29b-1) and miR-29b-2-5p (miR-29b-2) were down-regulated in CAFs compared to NFs (Figure 1F–1G). These indicated that miR-29b may play a suppressing role in CAFs. 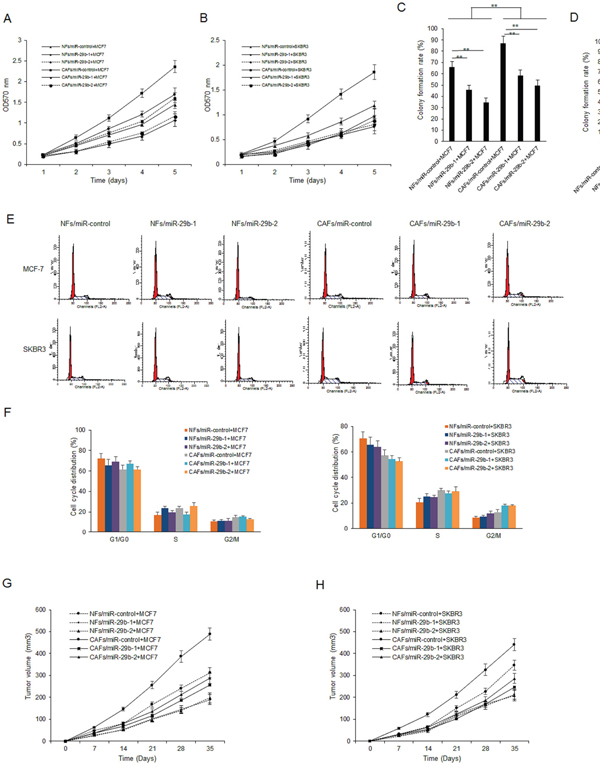 MiR-29b regulates the expression of cytokines in CAFs

The bioinformatics analysis showed that 3′-UTRs of the CCL11, CCL18, CXCL9, CXCL14 and CXCL17 contain the binding sites with miR-29b-1 (Supplementary Figure 2). 3′-UTRs of the CCL11, CCL4L1, CCL4L2 and CXCL14 have the binding sites of miR-29b-2 (Supplementary Figure 3). To know whether miR-29b regulates the expression of the predicted targeted cytokines, activated CAFs and Hs578Bst fibroblasts (Hs578BstCM) were transfected with miR-29b-1 or miR-29b-2 and the mRNA levels of endogenous cytokines were measured by real time RT-PCR. The results showed that CCL11 and CCL18 mRNA decreased when CAFs and Hs578BstCM were transfected with miR-29b-1, and the mRNA levels of CXCL9, CXCL14 and CXCL17 were slightly decreased (Figure 3A). CCL11 and CXCL14 mRNA decreased when CAFs or Hs578BstCM were transfected with miR-29b-2, but mRNAs of CCL4L1 and CCL4L2 were not changed significantly (Figure 3B). 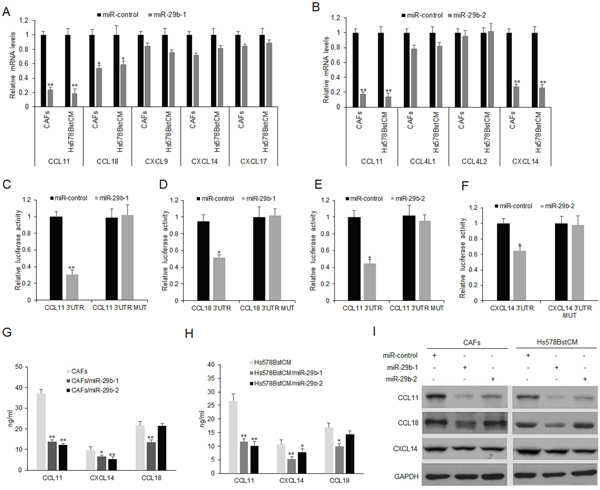 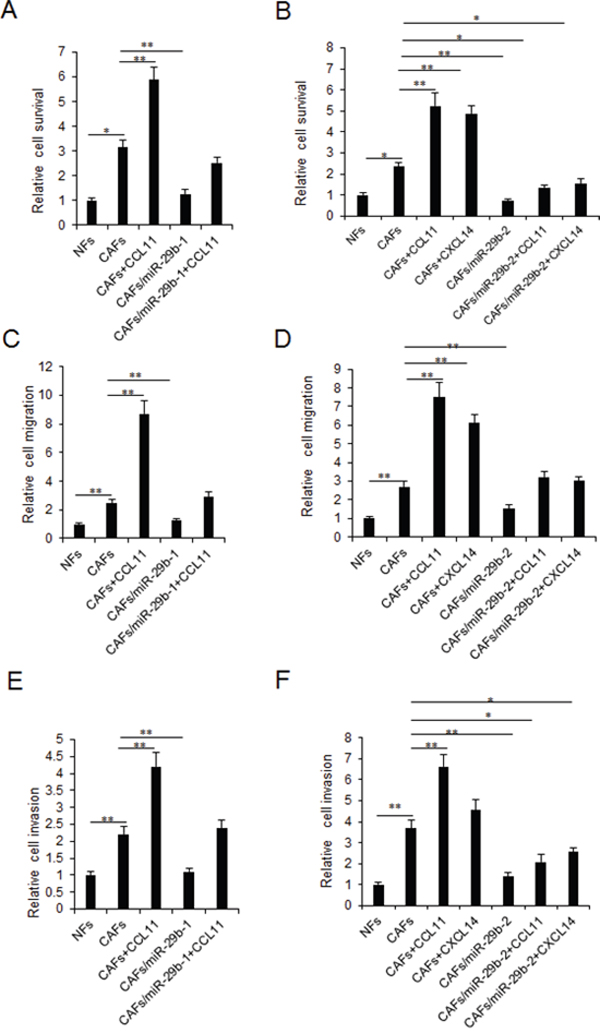 Figure 4: MiR-29b restoration in CAFs inhibits breast cancer cellular viability and metastasis by targeting CCL11 and CXCL14. CAFs were transfected with miR-29b mimics or treated with CCL11 or CXCL14 for 24h and then co-cultured with breast cancer cells. (A-B) MTT assay was used to test cell proliferation at day 3. (C-D) Cell migration was assayed by transwell chamber system. (E-F) Cell invasion was assayed by transwell chamber system. The data were shown as means±s.d. collected from three independent experiments. *: p<0.05, **: p<0.01. 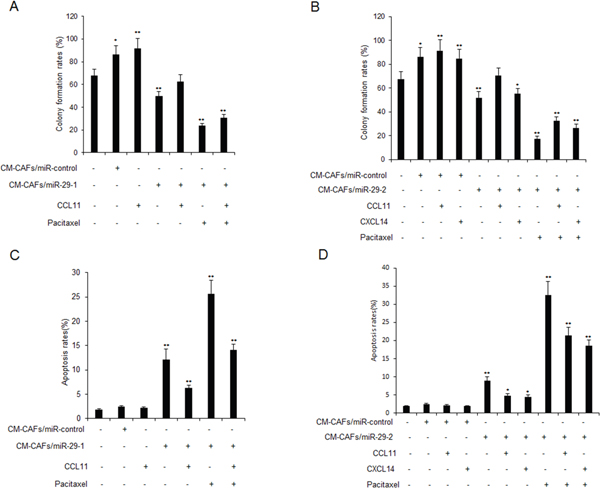 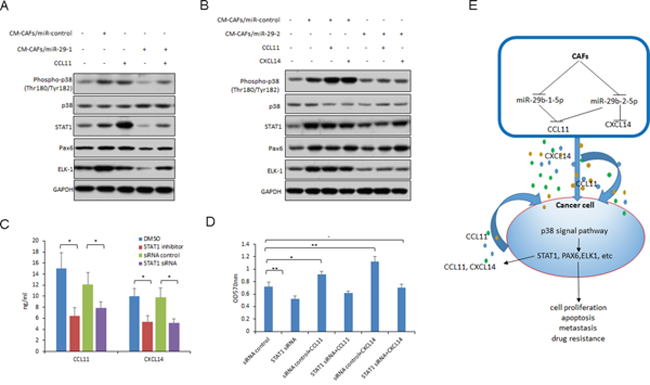 To know whether STAT1 involves in the chemokine expression of breast cancer cells, MCF-7 cells were transfected with STAT1 siRNA or treated with STAT1 inhibitor, CCL11 and CXCL14 were assayed by ELISA. The results showed that inhibition of STAT1 could reduce the levels of CCL11 and CXCL14 (Figure 6C). When the cells were transfected with STAT1 siRNA and treated with CCL11 or CXCL14, cell proliferation enhancement by CCL11 or CXCL14 was inhibited in the cells with STAT1 down-regulation (Figure 6D). The results from MTT assay indicated that inhibition of STAT1 suppressed the cell survival ability significantly in MCF-7 cells.

Although the stromal cells in the tumor environment including fibroblasts are not malignant, their altered gene expression profiles influence the cellular function and signal pathways of stroma cells, tumor cell behaviors by the communication between tumor cells and stroma. Fibroblasts are the most common cell type found in the tumor microenvironment and usually activated to cancer-associated fibroblasts (CAFs) due to the signals from the microenvironment, which are responsible for the synthesis of proteins involved in the remodeling of the extracellular matrix (ECM) as well as secretion of growth factors that regulate tumor cell proliferation, survival and dissemination. In the present study, we identified that miR-29b was the important molecule for the regulation of chemokines’ expression in CAFs.

In a conclusion, as shown in Figure 6E, our study elucidated that lack of miR-29b expression in CAFs could promote cellular viability and metastasis by activating p38-STAT1 in breast cancer cells by up-regulation of CCL11 and CXCL14 expression in CAFs. STAT1 could promote CCL11, CXCL14 and CCL2 production and then accelerate cell proliferation. This is a positive feedback process. There need more studies to evaluate the function of other miRNAs aberrantly regulated in CAFs and their network. Revealing the molecular mechanisms involved in CAFs-mediated cancer growth and progression may be beneficial for finding new cancer therapy targets.

Isolation and culture of cancer-associated fibroblasts

Carcinoma associated fibroblasts were isolated referred to the previously reports from five breast cancer tissues [22], which were diagnosed with mammary ductal carcinoma. The experiment was obtained the agreement from the Institutional Review Board of our hospital. The fresh breast cancer tissue samples were washed and kept in PBS containing antibiotics (100 U/ml penicillin, 100 μg/ml streptomycin, 1.5g/ml Fungizone) (Invitrogen Corporation, Carlsbad, CA) at 4°C. The tissues were cutted into about 2 mm fragments and then digested overnight at 37°C with 0.1% collagenase III (Worthington Biochemical Corp., Lakewood, NJ) in DMEM and 10% FBS. The following day, the epithelial cells were separated by centrifuge. The stromal cells were washed in PBS and cultured. All experiments were performed before the 10th passage. In addition, normal fibroblasts (2cm from breast cancer tissues) were isolated according to the CAFs isolation.

CAFs and NFs were co-cultured with breast cancer cells with the ratio at 1:1. Cells were cultured in DMEM/F12 media with 10% FBS supplemented with 10% FBS in a 37°C humidified incubator with an atmosphere of 5% CO2 and 95% air for 24 hours, and then washed for three times with PBS and finally cultured in 3ml serum free DMEM/F12 media for 2 hours. Conditioned medium was collected and filtered through a 0.22-μm filter (Merck Millipore, Massachusetts, USA) to remove cellular debris.

Total RNA was extracted from the cells with the indicated treatment using Trizol reagent (Invitrogen) according to the manufacturer’s protocol. RNA was qualified and performed for real time RT-PCR analysis. The primers sequences used in this study were provided in the Supplementary Materials (Supplementary Table 1). The relative miRNA or mRNA levels were calculated by comparing Ct values of the samples with those of the reference, all data normalized to the internal control GAPDH or U6 snRNA.

Table 1: The selected significant miRNAs from the CAFs and NFs

ShRNA lentiviral particle delivery system was used to generate STAT1 siRNA, and STAT1-silenced tumor cell lines were done according to the manufacturer’s instructions (Sigma-Aldrich, Saint Louis, MO, USA). The lentiviral particles were purchased from Sigma (Sigma-Aldrich, Saint Louis, MO, USA). After selection under puromycin (1μg/ml), the knocking down effect in the drug resistant cells was evaluated by western blot.

Cells were cultured in 24-well plates with low-glucose (1g/L), low-serum (0.5% FBS) medium (0.5 mL/well) at 37°C. Following the indicated treatments, 10 mg/mL methylthiazolyldiphenyl-tetrazolium bromide (MTT) was added (50 μL/well), and the cells were incubated for an additional 2 hours. The cells were then lysed with a lysis buffer (500μL/well) containing 20% sodium dodecyl sulfate (SDS) in dimethyl formamide/H2O (1:1, v/v; pH 4.7) at 37°C for at least 6 hours. The relative number of surviving cells in each group was determined by measuring the optical density (OD) of the cell lysates at an absorbance wavelength of 570 nm.

The cells were harvested, sparsely plated, and were cultured under the normal condition. The medium underwent the replacement at three-day intervals. And then the cells were fixed in 90% ethanol, stained with crystal violet and colonies consisting of at least 50 cells so they were counted ten days later.

In 2ml culture medium 2×105 cells/well (6-well plate) were seeded, and cultured for the indicated time before collection. The cells were stabilized with 75% ethanol for 24 h, and dyed with PI, and analyzed with ModFit of flow cytometry.

For apoptosis assay, the Annexin V straining was quantified by flow cytometric. The cells were plated in a 6-well plate, transfected with the indicated plasmids or siRNA or IGF2 treatment at 24 h later, the complete growth medium were changed to growth medium without serum. At another 24 h later, the cells were collected, washed in cold PBS twice and resuspended in 1×binding buffer at a concentration of 1×106 cells/ml. After that, the cells in 100 μl solution were transferred to a 5 ml culture tube, with 5 μl Annexin V-FITC and 5 μl PI (BD Biosciences) added, and gently vortexed and incubated for 15 min at RT in the dark. And finally, 400 μl 1× binding buffer was added to each tube to be analyzed by flow cytometry within one hour.

Cells were seeded on plates and the transfection was carried out in Opti-MEM medium using lipofectamine-2000 according to the manufacturer's protocol (Invitrogen, Carlsbad, CA, USA). The medium was changed after transfection for 5h, and the cells incubated at 37°C for the indicated time. For reporter assays, cells were transfected with the pGL3 basic vector or the control plasmid with co-transfecting with siRNAs. 48h later, luciferase activity was detected using Dual Luciferase Assay System (Promega, WI, USA) with a Sirius luminometer (Berthold Detection System).

5×106 CAFs transfected with miR-29-1, miR-29-2 or miRNA control and cells combining with 5×106 MCF7 or SKBR3 cells were suspended in 100 μL phosphate buffered saline and then injected into the fat pads on 6-week-old female athymic nude mice (Shanghai Laboratory Animal Center, Chinese Academy of Sciences, Shanghai, China). Tumor size was measured once a week, and the tumor growth was analyzed by measuring tumor length (L) and width (W) and calculated with the formula πLW2/6. All the animal work was conducted in concordance with the guidelines of the Animal Care Committee.

This work was supported by National Natural Science Foundation of China (NO. 81502571).