Diabetes mellitus significantly increases the risk of cancer and noncancer deaths [1–4]. According to global statistics, there were 1.8 million new cases of lung cancer in the world in 2012, accounting for about 13% of all cancer diagnoses [5]. In Taiwan, lung cancer represents approximately 15% and 8% of all cancers in men and women, respectively [6]. Although the incidence of lung cancer is decreasing in men and increasing in women in the whole world [5], it is increasing steadily in both sexes in Taiwan [6,7]. Smoking is the most important risk factor, but air pollution, fumes from cooking and other occupational and environmental exposure to carcinogens such as asbestos, arsenic, radon and polycyclic aromatic hydrocarbons are also potential risk factors [5].

By using the reimbursement databases of the Taiwan’s National Health Insurance (NHI), the present study aimed at clarifying whether metformin use in patients with T2DM might reduce the risk of lung cancer. The tertiles of cumulative duration of metformin therapy were used to evaluate a dose-response relationship. To reduce “prevalent user bias” [28], only patients with newly diagnosed diabetes and new users of metformin were recruited. To reduce “immortal time bias” during the initial period of follow-up when the outcome can not occur [28], recruited patients should have been prescribed antidiabetic drugs for at least two times, and those who were followed up for <1 year were excluded. To reduce the residual confounding from the differences in baseline characteristics, Cox regression models incorporated with the inverse probability of treatment weighting (IPTW) using propensity score (PS) were created to estimate the hazard ratios [29] and additional analyses were conducted in a sample of 1:1 matched-pairs.

There were 15414 never users and 280159 ever users of metformin in the original sample (Figure 1, Table 1). All characteristics differed significantly, except for hypertension, pioglitazone, Epstein-Barr virus (EBV)-related diagnoses and hepatitis B virus (HBV) infection (Table 1). There were 15414 never users and 15414 ever users in the matched-pairs (Figure 1, Table 1). Except for age, insulin, sulfonylurea, meglitinide and alcohol-related diagnoses, all other variables did not differ significantly between metformin ever and never users (Table 1). While examining the standardized differences, 11 of the variables had values >10% in the original sample, but none had a value >10% in the matched sample. Therefore, residual confounding from the variables was less likely in the matched sample. 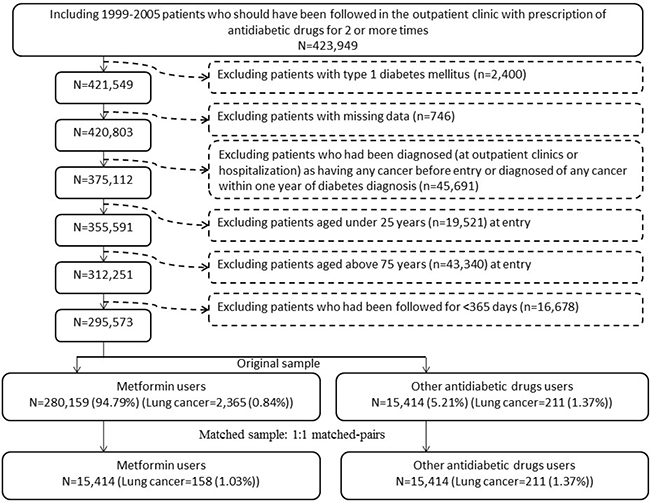 Figure 1: Flowchart showing the procedure in selecting the original sample and the matched sample into the study.

Table 1: Characteristics of metformin never users and ever users

*Age is expressed as mean and standard deviation

Refer to Materials and Methods for the classification of occupation

Table 3 shows the overall hazard ratios in the original sample as sensitivity analyses after excluding patients with certain risk factors of cancer. In all analyses, a significantly lower risk of lung cancer associated with metformin use was observed.

Table 3: Sensitivity analyses estimating hazard ratios for lung cancer for ever versus never users of metformin after excluding patients with certain risk factors of cancer

Table 4 shows the hazard ratios in different subgroups of age, sex, follow-up duration, the presence or absence of diagnoses of chronic obstructive pulmonary disease (COPD)/tobacco abuse, and the use of insulin, sulfonylurea, meglitinide, acarbose, rosiglitazone, pioglitazone, angio-tensin converting enzyme inhibitor/angiotensin receptor blocker (ACEI/ARB), calcium channel blocker, statin, fibrate and aspirin. All hazard ratios favored a lower risk of lung cancer associated with metformin use, even though the P-values were not significant for the subgroups who had been followed up for ≥5 years or had been using insulin, acarbose or rosiglitazone.

Table 4: Subgroup analyses estimating hazard ratios for lung cancer for ever versus never users of metformin

The findings supported a significantly lower risk of lung cancer in patients with T2DM who used metformin (Tables 2-4).

The mechanisms for a reduced risk of lung cancer associated with metformin use remain to be explored. In general, metformin may exert its anticancer effect through the inhibition of tumor angiogenesis [30], suppressing cancer cell metabolism [31], activation of apoptosis and autophagy [32], inhibition of mammalian target of rapamycin (mTOR) [33], immunomodulation by increasing the number of CD8+ tumor-infiltrating lymphocytes [34], and impairing one-carbon metabolism acting like an antifolate drug [35].

Some in vitro and in vivo studies conducted in lung cancer cells specifically supported these potential mechanisms. The mTOR pathway is upregulated in non-small-cell lung cancer (NSCLC) and metformin inhibits its signaling by directly activating 5' adenosine monophosphate-activated protein kinase (AMPK) via liver kinase B1 (LKB1) [36]. Metformin may also inhibit the growth of human NSCLC cells by activating AMPK via an LKB1-independent pathway [37]. In in vitro studies, metformin blocks the M2-like polarization of macrophages (important for cancer progression and metastasis) and inhibits metastasis of Lewis lung cancer [38]. Metformin can also act in combination with salinomycin (a putative stem cell killer) to eradicate the NSCLC monolayer cells [39] and sensitize lung cancer cells to chemotherapeutic agents [40]. A meta-analysis suggested that metformin therapy is associated with an improved outcome in lung cancer patients with diabetes [41].

There is a higher risk of lung cancer in patients with obesity [42]. It is interesting to observe an increased risk in the first tertiles of cumulative duration of metformin therapy (Table 2). A residual confounding from obesity possibly explained such a result because metformin is considered as the first-line treatment for patients with T2DM, especially in those with obesity. Patients categorized in the first tertiles were short-term users and would be characterized by obesity when metformin was preferentially used. The increased risk associated with obesity in patients who were previously on diet control or treated with other medications might be carried over to these short-term users.

The present study has several strengths. First, all claims records of outpatient visits and hospital admission were included and the diagnoses were considered from both sources. Second, most medical co-payments can be waived by the NHI in patients with cancer, and there is a low drug cost-sharing in patients with certain conditions, such as those with a low-income household, veterans or patients with prescription refills for chronic disease. Therefore, the detection rate of lung cancer would be less biased by different social classes. Third, self-reporting bias was much reduced by the use of medical records.

The study limitations included a lack of actual measurement data for confounders such as anthropometric factors, smoking, alcohol drinking, family history, lifestyle, nutritional status, dietary pattern, and genetic parameters. In addition, we did not have exposure data of some occupational and environmental carcinogens and could not evaluate the impact of biochemical data. Another limitation is the lack of information on the pathology, grading and staging of lung cancer. Because adenocarcinoma represents 42% and 71% of all cases of lung cancer in men and women, respectively, in Taiwan [43], the findings should better be applied to adenocarcinoma rather than to squamous cell carcinoma, especially in females.

In summary, this study supports that metformin use in Taiwanese patients with T2DM may significantly reduce the risk of lung cancer, especially when it has been used for more than 4 years.

The NHI implemented in Taiwan since March 1995 is a compulsory and universal system of health insurance. It covers >99% of Taiwan residents and has contracts with >98% of the hospitals nationwide. The reimbursement databases are handled by the National Health Research Institutes and can be used for academic researches after proposal review and approval by an ethic review board. This study was granted with an approval number 99274.

Individuals were de-identified for the protection of privacy. Diabetes was coded 250.XX and lung cancer 162, based on the International Classification of Diseases, Ninth Revision, Clinical Modification (ICD-9-CM).

Figure 1 shows the procedures in selecting a cohort of patients with newly diagnosed T2DM (original sample) and a 1:1 matched-pairs of sample (matched sample) into the study. The patients should have been diagnosed as having diabetes at an onset age of 25-74 years during the period from 1999 to 2005. Patients with diabetes mellitus diagnosed during 1996-1998 were excluded to assure a first diagnosis of diabetes after 1999, and they should have been followed up in the outpatient clinic with prescription of antidiabetic drugs for 2 or more times (n=423949). In Taiwan, patients with type 1 diabetes can be waived of much of the co-payment after a certified diagnosis with issuance of a so-called “Severe Morbidity Card”. These patients with type 1 diabetes (n=2400) were excluded because metformin is not indicated for them. Patients with missing data (n=746), with a diagnosis of any cancer before entry or within one year of diabetes diagnosis (n=45691), aged <25 (n=19521) or ≥75 (n=43340) years, and followed up for <365 days (n=16678) were also excluded. As a result, there were 280159 patients who had ever been treated with metformin and 15414 patients who had never been treated with metformin (the original sample).

Cumulative duration (months) of metformin use was calculated and its tertiles were used. Demographic data of age, sex, occupation and living region, and factors that might be correlated with metformin use, diabetes severity or cancer risk were considered as potential confounders. The living region and occupation were classified as detailed elsewhere [13]. In brief, the living region was classified as Taipei, Northern, Central, Southern, and Kao-Ping/Eastern. Occupation was classified as class I (civil servants, teachers, employees of governmental or private businesses, professionals and technicians), class II (people without a specific employer, self-employed people or seamen), class III (farmers or fishermen) and class IV (low-income families supported by social welfare, or veterans).

The characteristics between never users and ever users were compared by Student’s t test for age and by Chi-square test for other variables. The standardized differences proposed by Austin and Stuart as a test for balance diagnostics were calculated for all covariates [48]. A value of >10% might indicate potential confounding from the variable [48].

The incidence density of lung cancer was calculated for never users, ever users and tertiles of cumulative duration of metformin therapy. The numerator was the case number of incident lung cancer during follow-up, and the denominator was the person-years of follow-up. Follow-up started on the first day of the use of antidiabetic drugs and ended on December 31, 2011, at the time of a new diagnosis of lung cancer, or on the date of death or the last reimbursement record.

The treatment effect was estimated by Cox regression incorporated with IPTW using the PS [29]. Hazard ratios were estimated for ever versus never users and for each tertile of cumulative duration of metformin therapy using never users as referent.

The study was supported by the Ministry of Science and Technology (MOST 103-2314-B-002-187-MY3) of Taiwan. The funders had no role in study design, data collection and analysis, decision to publish, or preparation of the manuscript. The publication fee of this paper is supported by the Weng Yuan Endocrine Fund.

4. Tseng CH. Factors associated with cancer- and non-cancer-related deaths among Taiwanese patients with diabetes after 17 years of follow-up. PLoS One. 2016; 11:e0147916.

39. Xiao Z, Sperl B, Ullrich A, Knyazev P. Metformin and salinomycin as the best combination for the eradication of NSCLC monolayer cells and their alveospheres (cancer stem cells) irrespective of EGFR, KRAS, EML4/ALK and LKB1 status. Oncotarget. 2014; 5:12877–90. 10.18632/oncotarget.2657.