Esophageal cancer is the eighth most common cancer and the sixth leading cause of cancer-related mortality worldwide because of its extremely aggressive nature and the poor survival rate of affected patients [1, 2]. The risk of esophageal cancer has been associated with various environmental and genetic factors, as well as their interactions. Epidemiological evidence indicates that the most important environmental risk factors for esophageal cancer development include cigarette smoking, alcohol drinking, malnutrition, inadequate intake of fruits and fresh vegetables, and frequent consumption of pickled vegetables [3, 4]. However, not all people exposed to these hazards eventually suffer from esophageal cancer. Recent studies have suggested the importance of genetic polymorphisms in the carcinogenesis and development of esophageal cancer [5, 6].

Previous studies identified the nuclear-assembly factor 1 (NAF1) protein is an essential H/ACA assembly factor, which might have a central role in coupling H/ACA snoRNP assembly interact with the carboxy terminal domain (CTD) of RNA polymerase (pol) II, and could facilitate recruitment and binding of the H/ACA core proteins to the nascent snoRNA sequences [7, 8]. In addition, a genome-wide meta-analysis found that one SNP (rs7675998) in NAF1 was associated with telomere length (P = 4.35×10−16) [9]. Rs2320615 was reported to be the best surrogates for rs7675998 (pairwise r2 = 0.89) [10] and which was found to be associated with longer TL (P-trend = 3.3×10-4) [11]. Interestingly, short telomere lengths have been associated with esophageal carcinogenesis [12].

TNIP1 (TNFα-induced protein 3-interacting protein 1), alternatively called ABIN-1 (A20-binding inhibitor of NF-κB activation) or Naf1 (Nef-associated factor 1). TNIP1 is a human cellular protein initially identified as interacting with the HIV proteins nef [13] and matrix [14]. It has been reported that TNIP1 are associated with some diseases, such as leukemia-lymphoma [15], systemic lupus erythematosus [16–18], psoriatic arthritis [19], systemic sclerosis [20, 21], asthma [22], and gastric carcinoma [23]. A previous study revealed that TNIP1 inhibited the activation of nuclear factor kappa-B (NF-κB) [24], and another study demonstrated that blocking the NF-κB signaling pathway inhibited esophageal cancer proliferation and metastasis [25].

The five SNPs (rs2320615, rs3792792, rs4958881, rs7708392, and rs10036748) were successfully genotyped in the esophageal cancer cases and healthy controls. The average SNP call rate was 98.3% in cases and controls. The sequences of primers for each SNP polymerase chain reaction (PCR) and single base extension reaction are listed in Table 2. The minor allele frequencies for the five SNPs in the patient samples and normal controls are shown in Table 3. We used a χ2 test to compare the differences in the frequency distributions of alleles between cases and controls, but no significant associations between the alleles of the five SNPs were detected. One SNP (rs4958881) was excluded from further analyses because it deviated from Hardy-Weinberg equilibrium in controls (P < 0.001).

P values were calculated with the Chi-Square test.

Table 4: Genetic model analyses of the associations between the SNPs and esophageal cancer susceptibility

The logistic regression analysis was adjusted for age and gender.

P values were calculated with the Wald test. 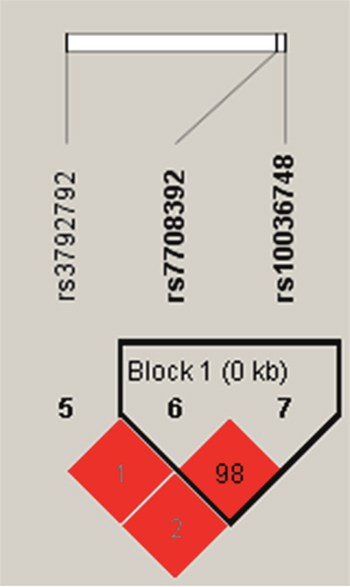 Figure 1: Haplotype block map for the three SNPs in the TNIP1 gene. The LD between two SNPs is expressed as a standardized D’ value (red schemes).

NAF1 encodes a protein important for the assembly of H/ACA human telomerase RNA [8]. This chaperone protein is involved in the formation and activity of telomerase, and a previous study indicated that NAF1 polymorphism (rs7675998) is associated with mean telomere length [9]. Interestingly, short leukocyte telomere lengths are associated with significantly increased risk of developing esophageal cancer [12]. Our results suggested that NAF1 polymorphisms are associated with the risk of esophageal cancer. However, it remains unclear whether these NAF1 polymorphisms affect telomere length by affecting specific protein synthesis and function, and ultimately the susceptibility to esophageal cancer. This assumption will be tested in future gene functional experiments.

Two recent GWASs revealed that rs7708392 and rs10036748 were associated with the risk of systemic lupus erythematosus [16, 17]. A previous report also indicated that the G allele of rs7708392 and the C allele of rs10036748 were associated with increased risk of gastric carcinoma, and that the haplotype CT (rs7708392-rs10036748) was associated with a reduced risk of gastric carcinoma [23]. In addition, a significantly decreased association was found between the allele T of rs10036748 and asthma risk [22]. Recently, the NF-κB signaling pathway was reported to be associated with tumorigenesis in esophageal cancer [25]. NF-κB is a ubiquitous transcription factor that involves in immunity and inflammation, regulates cell proliferation, apoptosis and migration, and is constitutively activated in a number of human cancers, including some esophageal cancers [26–28]. Previous studies have demonstrated that TNIP1 can inhibit NF-κB activity [29, 30]. However, no significant association between TNIP1 and esophageal cancer risk was found in the study.

There are some limitations to the present case-control study. First, the relatively small sample did not have sufficient statistical power to reflect the precise association between SNPs and the susceptibility to esophageal cancer. Second, many other risk factors (e.g., smoking, alcohol drinking) were not included due to a lack of corresponding clinical information. Third, biological function analyses were not conducted and deserve further study.

In conclusion, the current study has identified that rs2320615 in the NAF1 was associated with the risk of esophageal cancer in the Han Chinese population. These findings provide a theoretical foundation for further research (with a large sample) into the association between NAF1 and TNIP1 and esophageal cancer risk in other populations.

We recruited 386 patients who were diagnosed with esophageal cancer at the First Affiliated Hospital of Xi’an Jiaotong University between July 2014 and October 2015. The 495 controls without histories of cancer or other major diseases were randomly selected from the health evaluation center at the same hospital during the same time period. All participants were of ethnic Han origin, and their ancestors had lived in the region for at least three generations. Patients who previously had cancer, radiotherapy or chemotherapy were excluded. All cases were recruited without any restrictions regarding age, sex, or disease stage. In addition, each subject was personally questioned by trained interviewers, who used a pre-tested questionnaire to obtain basic information, including demographic data (e.g., age, sex) and some clinical information.

This study was approved by the Ethical Committee of the First Affiliated Hospital of Xi’an Jiaotong University, and complied with the World Medical Association Declaration of Helsinki. All individuals gave written informed consent to be included in the study.

A vacutainer was used to collect a peripheral venous blood sample (5 mL) fromeach study subject, and the sample was transferred to a tube containing ethylenediamine tetra-acetic acid. All blood samples were stored at -20°C until DNA extraction. Genomic DNA was isolated from whole blood with the GoldMag-Mini Whole Blood Genomic DNA Purification Kit according to the manufacturer’s protocol (GoldMag. Co. Ltd., Xi’an, China). The concentration of the isolated DNA was measured with a spectrophotometer (NanoDrop 2000; Thermo Fisher Scientific, Waltham, MA, USA) at wavelengths of A260 and A280 nm. The DNA was diluted with QIAgility to a final concentration of 20 ng/μl.

Five SNPs (rs2320615, rs3792792, rs4958881, rs7708392 and rs10036748) with had minor allele frequency > 5% in the HapMap of the Chinese Han Beijing population that have been reported to be associated with the risk of several diseases and cancers, including systemic lupus erythematosus [16–18], systemic sclerosis [21], asthma [22], and gastric carcinoma [23]. They were selected for further genotyping. Primers for the amplification process and single base extension reactions were designed with Sequenom Mass-ARRAY Assay Design 3.0 Software (Sequenom, San Diego, CA, USA). Genotyping of the SNPs was performed with the Sequenom MassARRAY platform [31] (Sequenom, San Diego, CA, USA) according to the standard instructions recommended by the manufacturer. Sequenom Typer 4.0 software was used for data management and analyses.

For cases and controls, we analyzed the gender distribution using Pearson’s χ2 test and the age distribution by Welch’s t test. We analyzed the genotype frequencies in the controls with Fisher’s exact test to determine whether the five SNPs departed from Hardy-Weinberg equilibrium. The differences in the SNP allele and genotype distributions between patients and controls were evaluated with Chi-squared test/Fisher’s exact tests. Genetic model analyses (Dominant, Recessive and Additive) were performed with PLINK software to assess the significance of the SNPs. The associations of the SNPs with the risk of esophageal cancer were estimated from the odds ratios (ORs) and 95% confidence intervals (CIs), which were determined by unconditional logistic regression and adjusted for age and gender [32]. The P-values reported are two-sided, and values of P < 0.05 were considered to be statistically significant. We used the Haploview software package (version 4.2) platform for analyses of pairwise linkage disequilibrium (LD) and haplotype structure [10]. All statistical analyses were performed with Microsoft Excel and SPSS 19.0 (SPSS, Chicago, IL, USA).

We thank all authors for their contributions and support. Author Xinhan Zhao designed the study. Authors Chenli Yue and Miao Li analyzed the data and wrote the paper. Authors Chenxing Da, Hongtao Meng and Shaomin Lv performed the experiments. We are also grateful to all participants for providing blood samples.

24. Gurevich I, Zhang C, Francis N, Aneskievich BJ. TNIP1, a retinoic acid receptor corepressor and A20-binding inhibitor of NF-kappaB, distributes to both nuclear and cytoplasmic locations. The journal of histochemistry and cytochemistry. 2011; 59:1101-1112.