Tea consumption and the risk of biliary tract cancer: a systematic review and dose-response meta-analysis of observational studies

Tea is one of the most popular beverages worldwide, especially in Asia. Meantime, it is becoming more and more popular in the West. It is a drink for thousands of years with now growing interests in its additional benefits in health. For example, Studies have indicated that tea intake was associated with the reduced incidence of cardiovascular disease and increased bone density [15, 16]. In addition, tea is also associated with reduced risk of many types of cancer, including oral, bladder, esophageal, lung, breast, stomach, and liver cancer [17–27]. Although many observational studies have reported the relationship between tea and biliary tract cancer [28–35], no published studies could confirm the relationship. Therefore, we performed meta-analysis to present the association of them more comprehensive.

Figure 1 shows the process of selecting studies for the meta-analysis. We obtained 8708 articles through the initial search, 2441 of which were duplicated. We further excluded 6122 studies based on title and abstract review. Finally, we identified eight eligible observational studies for our meta-analysis, including five case–control and three cohort studies. 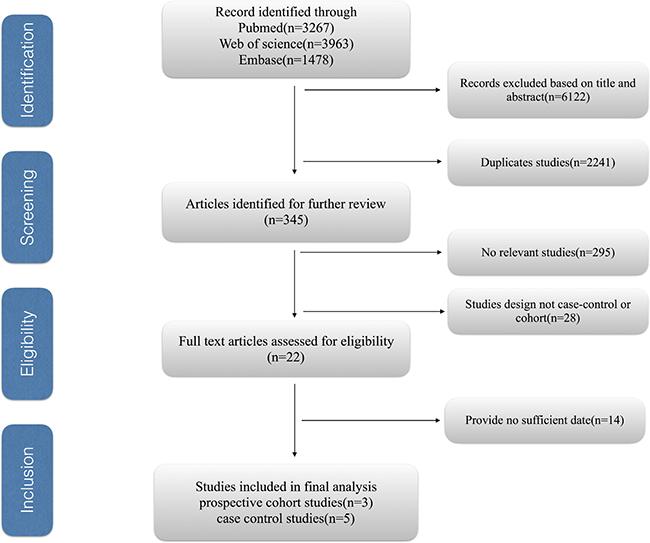 Figure 1: The process of selecting studies for the meta-analysis. 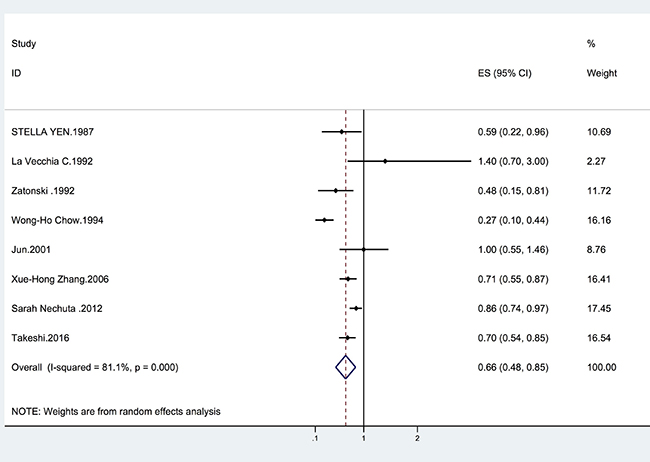 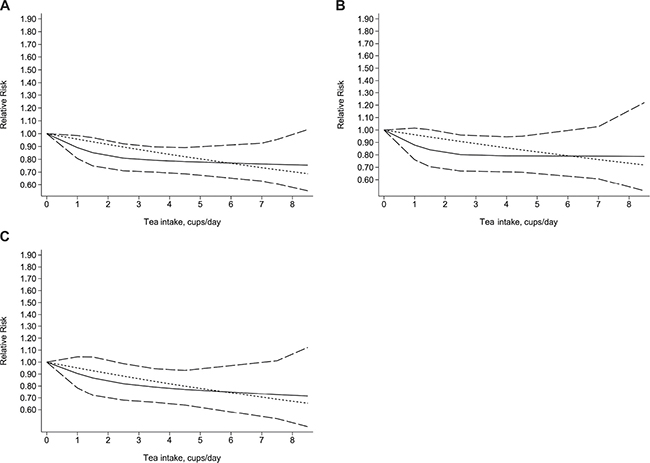 Although the number of studies included in the meta-analysis was less than ten, the funnel plots still did not reveal substantial asymmetry. Additionally, Begg’s and Egger’s tests did not identify substantial publication bias (p > 0.05) (Figure 4). 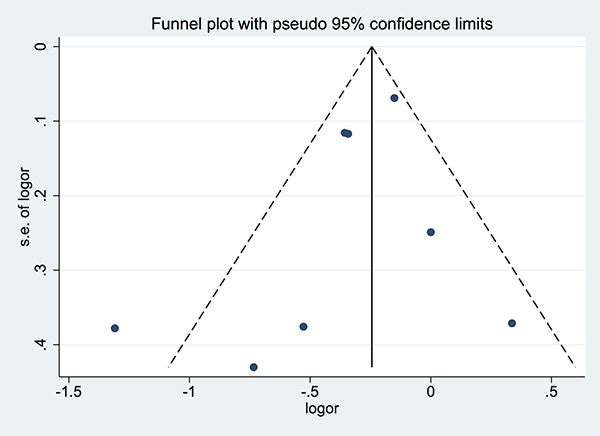 An important ingredient of tea is tea polyphenols, which are an important type of antioxidant. Tea polyphenols, also known as catechins, have four important types of component, namely (−)-epigallocatechin gallate (EGCG), (−)-epigallocatechin (EGC), (−)-epicatechin gallate (ECG), and (−)-epicatechin (EC) [36]. EGCG is the main tea catechins and also plays the most important role in inhibiting the formation of cancer [37]. Firstly, it can suppress the growth of cancer cells and induce their apoptosis [38]. Moreover, it can suppress receptor-dependent signaling pathways and angiogenesis, thus preventing tumorigenesis [39]. Secondly, a common characteristic of tumor cells is methylation of DNA, which plays an important role in epigenetic mechanisms for silencing various genes. EGCG contained in the tea polyphenols can inhibit this biochemical process, thus preventing or reversing related gene-silencing in cancer cells [40]. Thirdly, tea polyphenols can inhibit activities of enzyme, including DNA methyltransferase, dihydrofolate reductase, glucose-6-phosphate dehydrogenase, and glyceraldehyde-3-phosphate dehydrogenase, thus preventing cancer formation [41]. Although many studies have suggested that tea can prevent cancer formation and have elucidated the mechanism, the mechanism about tea and biliary tract cancer is still unclear.

Our study has several strengths. First, it is the first to explore the dose–response relationship between tea intake and the risk of biliary tract cancer. Second, we performed subgroup and sensitivity analyses to determine the factors affecting the risks. Third, most of the studies included in our meta-analysis were of high quality. All of these characteristics make the conclusions of our study more convincing.

However, there are still several limitations that must be taken into account. First, there are many type of teas, including green, black, and oolong tea [42]. However, we were unable to retrieve information about the type of teas, which might have influenced the virtual results. For example, researcher has reported that green tea reduces cancer risk more strongly than black tea [43]. Secondly, the heterogenicity among studies was obvious and acted as another potential limitation of this study. Third, although we did address a number of adjustment factors, we could not address all potential adjustment factors. People with biliary cancer may stop drinking caffeine-containing beverage and pay more attention on physical exercise, which might have influenced the impact on risk. Finally, our study comprised five case control and only three cohort studies. The former was prone to generate recall and selection biases.

In summary, we found that tea is associated with a 34% lower incidence of biliary tract cancer. Subgroup analysis showed that tea consumption is associated with decreased risk of GB and EXHBDC with 28% and 20%, respectively. However, more prospective studies and basic research are still urgently needed to further validate the association between tea and biliary cancer and the potential mechanisms.

The eligibility criteria were as follows: study design (case control or cohort); exposure factor tea and outcome biliary tract cancer, including cancers of the GB, EXHBD, and VOA; and odds ratio (OR)/risk ratio (RR) values and corresponding 95% confidence intervals (CIs) for different categories of tea consumption available or sufficient information provided to enable the calculation of these variables. If two studies reported the same data, we selected the study with the larger sample.

Two researchers independently extracted the required information from the selected reports in a standardized manner. We collected the following information from each article: year of publication, first author’s name and country of origin, study design (case control or cohort), number of participants (cases, controls, or cohort size), duration of follow-up, types of cancer, sex of participants, sources of controls, comparison of exposure levels, potential adjusted confounding variables, OR/RR values and 95% CIs for different categories of tea consumption, and quality score. To assess the dose–response, we also collected the number of case and person-years for each category of tea consumption.

We used the Newcastle– Ottawa Scale (NOS) [44] to evaluate the quality of included studies. We assigned quality categories based on the scores of each study. The categories were the following: high quality (score 7–9), medium quality (score 4–6) and low quality (score less than 4) [45]. We resolved discrepancies by consensus.

We assessed the relationship between tea consumption and biliary tract cancer using OR/RR values and the corresponding 95% CIs. When the results provided were for multiple groups of tea consumption with OR or RR values and corresponding 95% confidence intervals, we combined them to obtain a single OR/RR value and corresponding 95% CI [45]. We treated the hazard ratio as equivalent to the RR. When separate results were reported for men and women, we analyzed the findings for men and women as two different independent reports. Additionally, when results for subtypes of biliary tract cancers, such as GB cancer, EXHBDC, and VOA, were reported, we analyzed data for each subtype of cancer as an independent report.

To enable the meta-analysis of the dose–response, we extracted the number of cases and person-years and RRs with variance estimates for at least three quantitative exposure categories from each study. If the studies did not provide these data, we required sufficient information to calculate them. If the intake of tea was reported as amount per year or lifetime, we calculated the daily intake. If studies did not provide tea intake in terms of cups, we assumed 120 mL or 50 g as one cup [31, 35]. For dose–response analysis, we used the midpoint of tea intake in each category as the dose of tea consumed. If the highest category was open- ended, we set the midpoint of the category at 1.5 times the lower boundary; if the lowest category was open-ended, we set the lowest boundary at zero [46]. Additionally, we used restricted cubic splines with four knots at fixed percentiles (5%, 35%, 65%, and 95%) of the distribution to evaluate a potential linear relationship between tea consumption and the risk of biliary tract cancer. A p value for the curve linearity relationship was calculated by testing whether the coefficient of the second spline was zero [47]. Greenland and Orsini were the pioneers of this method [48, 49] [50], we use the method to test a simple quadratic term to the linear model and it was based on the results across categories of tea consumption. Many subsequent studies have described it in detail [51, 52].

We also performed subgroup analyses by subtype of cancer, study design, sex, geographic area, number of cases, date of publication, duration of follow-up, study quality (NOS scores), and whether cholelithiasis, smoking, body mass index or education was adjusted for in the models. Sensitivity analyses were also performed by excluding studies not eligible for dose–response analysis.

J.X. designed the study and wrote this manuscript. J.L. and A.W. searched database and reviewed studies. Y.W., Y.X., X.S. collected and analyzed data. X.L. and H.Z. coordinated and provided financial support for this work. All of the authors have read and approved the final manuscript.

44. Stang A. Critical evaluation of the Newcastle-Ottawa scale for the assessment of the quality of nonrandomized studies in meta-analyses. European Journal of Epidemiology. 2010; 25:603–605.