Glioma is the most common primary central nervous system (CNS) tumors that originate from glia, accounting for approximately 80% of all primary malignant brain tumors, with nearly 20,000 people affected annually in the United States [1]. The survival time and prognosis of patients diagnosed with gliomas in adults is very poor. According to the WHO classification (2007), gliomas are classified into four grades (I to IV) based on microscopic appearance [2]. Alternatively, they are divided into astrocytic tumors, oligodendrogliomas, and oligoastrocytomas. Despite high-dosage ionizing irradiation (IR) devoted to the risk factor for gliomas, the etiology of sporadic gliomas remains unexplained [3]. In addition, only a small proportion of individuals who are exposed to IR environments will develop gliomas, suggesting hereditary factors contribute to susceptibility to glioma.

The Epidermal Growth Factor Receptor (EGFR) is a transmembrane tyrosine kinase in 7p11.2, It is one of the critical oncogenes for several cancers and variably expressed from embryogenesis to adulthood in the normal brain development. For low-grade glioma [4] and anaplastic astrocytoma [5], The overexpression of EGFR may be a prominent event in the progression of gliomas with a poor prognosis. Current evidence suggests that EGFR amplification is a hallmark of glioblastoma (GBM). As the most frequent and the most malignant glioma in the adult population [6-8], accounting for approximately 30% - 50% of high-grade glioma and containing a genetic mutation of EGFR (EGFRvIII).

Although several studies showed that EGFR gene polymorphisms were associated with glioma risk, those currently available results are inconclusive [9-11]. The aim of this study was to investigate and validate the potential relationship between tSNPs in EGFR gene and glioma susceptibility in the Han Chinese population using a case-control study.

The details of selected characteristics of all subjects were presented in Table 1, including gender, age, and histologic type. We enrolled a total of 692 participants, including 394 patients (211 males, 183 females) and 298 controls (119 males, 179 females) in this study, the mean age of the subjects was 42.64 ± 16.89 years for cases and 49.91 ± 7.58 years for controls. The distributions of gender and age were statistically significant differences between the case and control groups (p < 0.05). Of the cancers, astrocytoma (175) and glioblastoma (116) are the more common histologies, and ependymoma (19), oligodendroglioma (10), oligodendrocytes astrocytoma (35) and others (39) are the less common histologies. 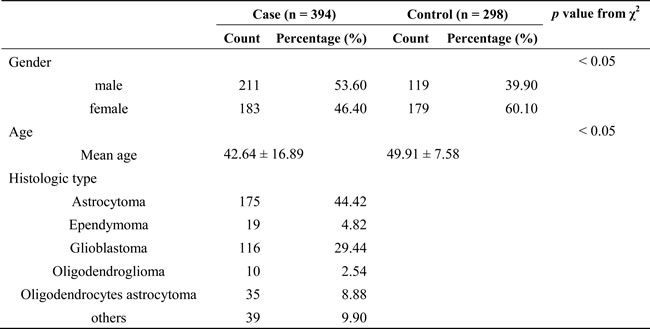 Table 2: Basic information about EGFR candidate tSNPs in this study

Table 3: Association between tSNPs in EGFR gene and risk of different histological types of gliomas in allelic model analysis

Association between EGFR and glioma risk 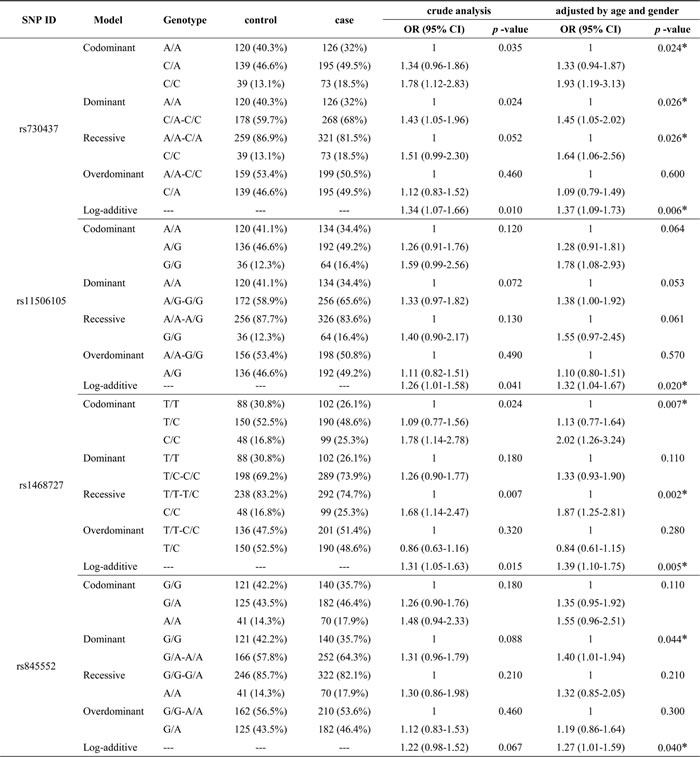 Table 5: Association between EGFR tSNPs and risk of astrocytoma under multiple models of inheritance 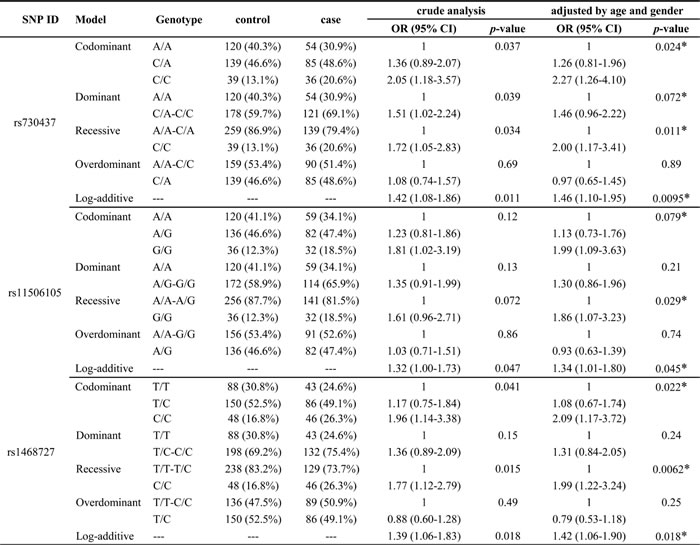 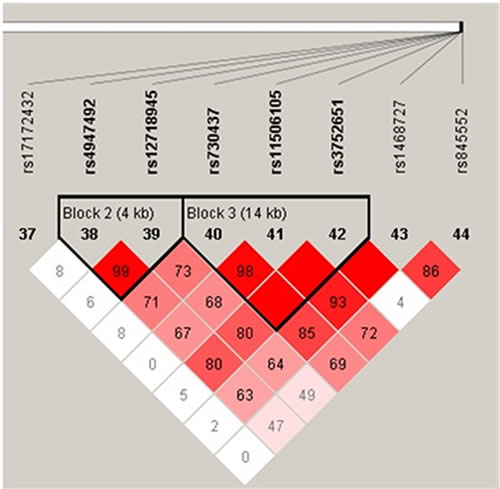 Figure 1: Haplotype block map for tSNPs in the EGFR gene.

Table 6: Haplotype frequencies of EGFR gene and association with risk of glioma and astrocytoma

We successfully genotyped 8 tSNPs in EGFR and found some evidence of association at 3 SNPs (rs1468727, rs730437, and rs11506105) that were associated with glioma risk. In addition, CGT and CAT in block 3 trends to increase glioma risk, which suggested that this gene may contribute to glioma in a case-control study from the Han Chinese population. EGFR (erbB-1), the prototypical member of the erbB receptor family and is frequently expressed in human tissues. The EGFR signaling pathway regulates a wide range of cellular activities associated with cell growth, migration and survival [12]. Several previous studies have assessed single nucleotide polymorphisms (SNPs) in the EGFR gene that is implicated in human tumors, such as breast cancer [13], lung cancer [14] and prostate cancer [15]. And several studies have demonstrated that certain genotypes of the EGFR gene may be related to glioma susceptibility, which indicated EGFR polymorphisms play an important role in the carcinogensis of glioma [11, 16]. Our results found that the C allele of rs1468727 and rs730437, intronic SNPs within the EGFR gene, which was associated with an increased risk of glioma compared to controls. Previously, in Chinese populations, Liu et al suggested that the T allele of rs1468727 and C allele of rs730437 were associated with decreased glioma risk [10]; Wang et al observed that the C allele of rs1468727 may increase the risk of glioma, while the A allele of rs730437 may decreased the risk of glioma [11], such inconsistencies in these reports may result from different environment or insufficient sample size. From one study of Andersson U et.al, we found the significant difference exist in these SNPs of our study. For example rs3752651 which significant association with glioma in heterozygote genotype model (OR=1.29, 95%CI = 1.06-1.56, p=0.008 ) [16], but in our study it isn’t significant (OR=1.13, 95%CI=0.76-1.68, p=0.556). A study in Han Chinese population indicated that genotype CC of rs1468727 and rs730437 conferred an elevated risk for glioma [9], which was well in accordance with our findings. All these papers examine implied that two single nucleotide polymorphisms (rs1468727 and rs730437) may play critical roles in the pathogenesis of glioma and might be potential molecular markers for evaluating glioma risk.

The SNP 11506105 in EGFR was identified to be associated with an increased risk of glioma, according to allele G association analysis, which is inconsistent with a previous study in a European population, the A allele of rs11506105 had been found to be associated with increased risk of glioma (OR = 1.39, 95%CI: 1.08-1.78, p = 0.012) [16]. Our data for rs845552, we did not find any statistical association with astrocytoma risk, suggesting that either there was no such effect or the small sample size after stratified analysis limited statistical power.

Besides the allelic model analysis, we further performed genotypic model analysis to investigate the role of EGFR variants on glioma risk. Our study found that rs730437 and rs1468727 were associated with increased glioma risk in co-dominant, recessive and log-additive models (Table 4). The two SNPs were found to be associated with glioma risk in the many studies. However, the past results were inconsistent. The inconsistency might be attributed to the different ethnicity in the populations studied, given that the minor allele frequency was different. In addition, after a strict Bonferroni correction analysis was applied, the significance level of the association between EGFR tSNPs and risk of glioma was attenuated.

There are several inherent limitations that cannot be ignored. Firstly, the subgroup analysis for histology and/or grade, and gender-specific significant variants in glioma patients were not performed, due to the relatively small sample size. Secondly, we selected tSNPs with MAF higher than 5% in the HapMap Chinese Han Beijing population to determine the statistical power was large enough for analyzing data, the haplotype-based study was also performed to affirm sufficiently high power to detect the association between candidate tSNPs and glioma risk. Thirdly, glioma patients and controls were drawn from same hospital, so selection bias cannot be excluded and the subjects might not be representative of the general population.

Our study is an exploratory research which shed new light on the association between EGFR tSNPs and glioma risk in the Chinese population. Combined with the previous studies, we only further ascertain the potential role of the EGFR gene to glioma onset. Further investigation with a larger sample size in Chinese populations or another ethnic is warranted.

We recruited patients between December 2002 and April 2013 for the molecular epidemiology study at the First Affiliated Hospital of the Medical College of Xi’an Jiaotong University. All gliomas cases were confirmed by the newly diagnosed histopathologically, and patients who had any history of cancer and received either radiotherapy or chemotherapy before surgery were excluded. Through our normal the epidemiological investigation and eliminated individuals with any glioma disease family history of more than three generations, eventually a total of 298 controls during the similar period was randomly recruited from the medical examination center at First Affiliated Hospital. Their frequency matched to all adult brain tumor cases on age, sex, and region.These controls were cancer-free and genetically unrelated to the patients.

Each participant was interviewed by a trained nurse, a standard questionnaire was used to collect detailed information regarding demographic characteristics, radiation exposure, smoking habit, alcohol drinking habit, family history of cancer and other factors. Each subject donated 3-5 ml of venous blood, and all subjects who agreed to the purpose and experimental procedures of the study, and signed their written informed consents prior to sample donation. The research protocol was performed in accordance with the Declaration of Helsinki and approved by the Human Research Committee of the First Affiliated Hospital of the Medical College of Xi’an Jiaotong University for Approval of Research Involving Human Subjects.

Statistical calculations were made using Microsoft Excel (Redmond, WA, USA) and SPSS 19.0 statistical package (SPSS, Chicago, IL, USA). All statistical tests were two-sided, and p ≤ 0.05 was regarded as statistically significant differences. Each tSNP frequency was assessed for departure from Hardy–Weinberg Equilibrium (HWE) using an exact test among controls. We compared genotype frequencies and allele frequencies between cases and controls using the χ2 test. To estimate the association between the EGFR genetic polymorphisms and risk of glioma, as measured by odds ratios (ORs) and 95% confidence intervals (CIs) were calculated using unconditional logistic regression with adjustment for age and gender [19]. We used multiple inheritance models (codominant, dominant, recessive, overdominant and additive) to evaluate the associations between certain tSNPs in EGFR gene and glioma risk, with SNPstats software (http://bioinfo.iconcologia.net/snpstats/start.htm) [20]. For each polymorphism, ORs and 95% CIs were calculated by unconditional logistic regression analysis with and without adjustment of age and gender [19].