Tea consumption and the risk of ovarian cancer: A meta-analysis of epidemiological studies

Ovarian cancer has the sixth-highest prevalence among cancers worldwide and is the primary cause of death due to gynecologic malignancy [1, 2]. Because most patients with cancer have been diagnosed at an advanced stage, its mortality rate is high and < 50% of patients live beyond 5 years after diagnosis [3]. The incidence of ovarian cancer widely differs among regions, races, and ethnicities: The incidence in the Asian population is much lower than that in the European population, indicating that lifestyle and eating habits may play an important role in the pathogenesis of ovarian cancer [4]. The influence of lifestyle on cancer has been reported in many studies. Changes in lifestyle factors, including diet, can prevent several types of cancers such as colorectal cancer, bladder cancer, ovarian cancer, and liver cancer [5–7]. Many in vitro and animal experiments have shown that tea contains a variety of complexes, especially polyphenols (green tea), which play a significant role in inhibiting the growth of cancer cells [8, 9].

Several epidemiological studies including case-control and cohort studies have investigated the association between tea consumption and ovarian cancer risk; however, their results were inconsistent. In 2015, Zhang et al. [10] performed a meta-analysis of observational studies that investigated the association between green tea intake and ovarian cancer risk and reported that high tea consumption had no significant effect on the risk of many cancers, including gastric, rectal, lung, colon, pancreatic, liver, breast, ovarian, prostate, and bladder cancers. However, their meta-analysis only included 6 observational studies, and their methodology was not comprehensive, as it did not include sub-group analyses according to the geographic location, adjustment for factors, Jadad scores from the literature, sensitivity analysis, and meta-regression analysis. Therefore, they were unable to identify potential sources of heterogeneity. In addition, no statistical significance was reported between tea consumption and ovarian cancer risk in 2 other meta-analyses [11, 12]. However, in another meta-analysis, tea consumption was found to be inversely, but not significantly, associated with ovarian cancer risk [13].

In order to clarify whether tea consumption is associated with ovarian cancer risk, this study aimed to perform a comprehensive meta-analysis of 18 epidemiological studies. 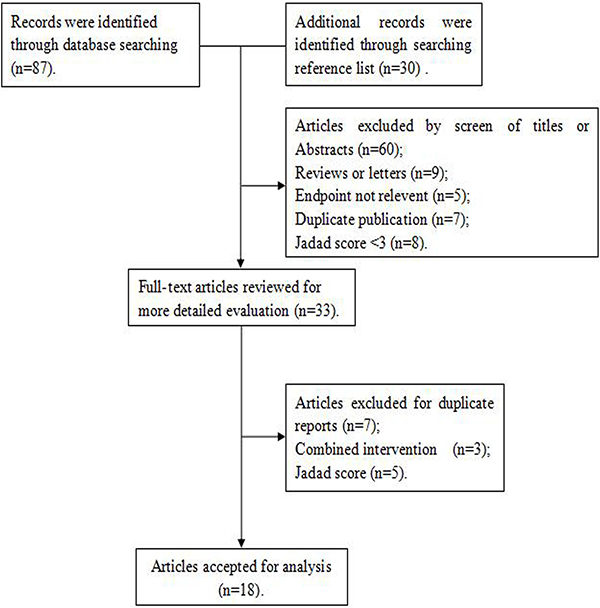 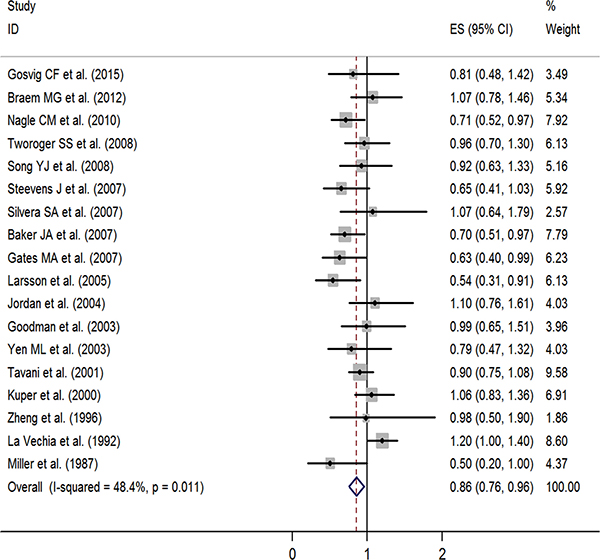 Table 2: Stratified analysis of ovarian cancer in relation to tea consumption according to study characteristics 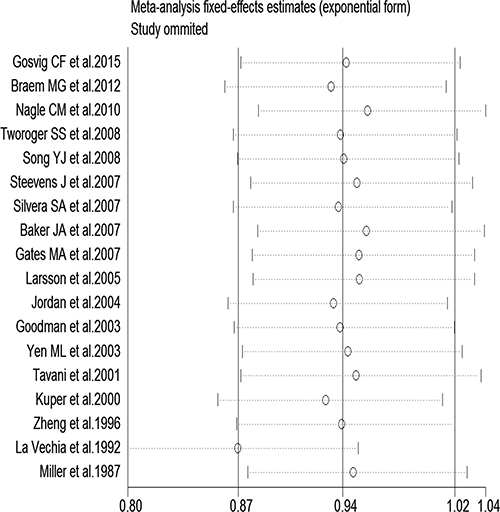 Figure 3: Sensitivity analysis of tea consumption and risk of ovarian cancer showing that omission of any study did not alter the observed effect.

We performed a meta-regression analysis to test the study design and geographic area. We found that study design (47.90%) and geographical region (44.60%) was statistically significant in the multivariate model (Figure 4A, 4B). Interpretation of Figures 5 and 6 revealed no support for publication bias. Furthermore, Begg’s and Egger’s tests (all P > 0.01) indicated no evidence of publication bias among studies (Figures 5 and 6). 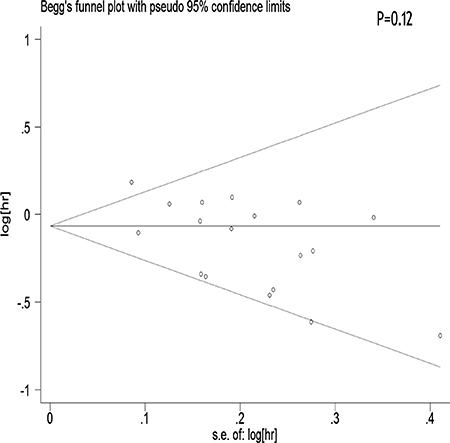 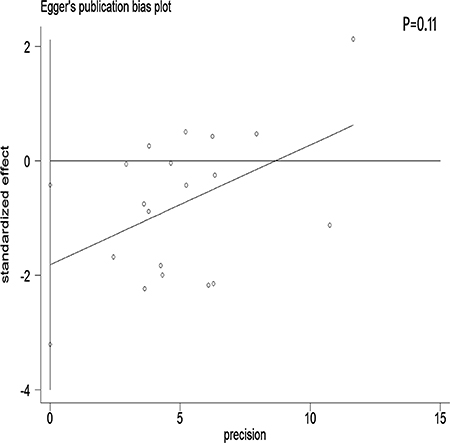 This meta-analysis showed that tea consumption significantly reduces the risk of ovarian cancer. Our meta-regression analysis revealed that the study design may be the source of heterogeneity between studies (47.90%), and geographical region was associated with a 44.60% heterogeneity reduction across the studies. In addition, our results were not altered by the control source and most confounder adjustments such as education, OCP use, BMI, and smoking in the subgroup analyses. However, the association was substantially altered by a few confounder adjustments, i.e., family history of cancer, menopause status, and Jadad score.

Stratification by country showed that tea consumption decreased the risk of ovarian cancer only in studies conducted in the United States and Sweden. Geographical differences may be a result of various factors such as the differences in genetic susceptibility, culture, and lifestyles. Moreover, the types of tea and frequency of tea consumption differ among different areas. Our sensitivity analysis indicated that omission of any study did not significantly alter the magnitude of the observed effect, indicating the stability of our findings. Moreover, the Begg’s and Egger’s tests showed that no publication bias existed.

Many cell in vitro experiments and animal experiments have shown that tea has significant anti-cancer effects [30–32]. To a certain extent, a meta-analysis can compensate for the limitations of a single study to resolve the contradiction between the conclusions of the study. Prior meta-analyses also found that tea tends to reduce the incidence of ovarian cancer, but the results were not statistically significant [10–13]; these meta-analyses, selected from the English literature, studied the consumption of different types of tea including green tea and black tea, and the target population was mostly the Caucasian population, which could lead to some bias.

Tea is a relatively inexpensive and safe drink and prevents ovarian cancer by a variety of mechanisms. Tea polyphenols are useful components of the tea extract that can down-regulate the expression of a variety of tumor genes, induce tumor cell apoptosis, block tumor cell cycle, up-regulate the body metabolism, and remove excess free radicals, ultimately playing a role in the prevention and inhibition of tumors [33–36]. Some polyphenols can induce tumor cell apoptosis and inhibit tumor angiogenesis. The consumption of black tea, in particular, which is rich in polyphenols, has been found to significantly reduce the risk of ovarian cancer [37]. However, evidence for the efficacy of black tea for prevention of cancer is not conclusive [12]. On the other hand, green tea contains a variety of phenolic compounds that have a strong antioxidant activity, and its anti-cancer effect is much stronger than that of black tea [13]. One of the main components of green tea is catechol (epigallocatechin gallate), which has remarkable antioxidant activity and can effectively inhibit the growth and evolution of cancer cells [38]. In the Asian population, especially in the Chinese population, the amount of green tea consumed is much higher than that of black tea, but data on this issue are scarce. The effect of tea may also differ due to the difference in genetic heterogeneity and lifestyle among populations. In addition, the various ingredients in tea can have different anticancer activities and effects on different types and subtypes of ovarian cancer [20], which have not yet been explored.

The strength of the present meta-analysis is its large sample size (701,857 female subjects and 8,683 ovarian cancer cases) and no significant evidence of publication bias. Furthermore, our findings were stable and robust. However, there were several limitations that should be noted. First, as a meta-analysis of observational data, the possibility of recall and selection biases cannot be ruled out. Only 5 cohort studies investigated the association between tea intake and ovarian cancer risk, which was a rather small number to draw concrete conclusions from. Compared with case-control studies, cohort studies are less susceptible to bias (e.g., recall bias and selection bias) due to their nature. Therefore, more prospective cohort studies are required on this issue in the future. Second, we did not search for unpublished studies, and only published studies were included in our meta-analysis. Third, publication bias may have occurred, although no publication bias was indicated from both visualization of the funnel plot, the Begg’s test and the Egger’s test. Fourth, no subanalyses on the histological types of ovarian cancer were performed. Given the heterogeneity of ovarian cancer, this is an important limitation of the study. Fifth, most of the included studies originated from the United States and Europe. Finally, although different types of tea (red, green, and black tea) may have different effects on the risk of ovarian cancer, we did not perform a detailed meta-analysis to determine these differences due to the lack of available studies.

A literature search was conducted using MEDICINE, Scopus, PubMed, and Web of Science databases for all relevant studies published in English-language journals up to April 2016. Methodology adhered to the PRISMA guidelines. The search terms included “tea” or “black tea” or “green tea” and “ovary” or “ovarian” and “malignancy” or “neoplasm” or “tumor” or “cancer.” We also reviewed the list of references of each comparative study.

Observational studies that investigated the relationship between tea consumption and ovarian cancer risk were collected independently by two authors. The inclusion criteria were as follows: (i) a case-control or prospective cohort design; (ii) investigation of the association between tea consumption and ovarian cancer incidence; (iii) availability of RR (relative risk) estimates or odds ratios or risk ratios or hazard ratio and 95% CIs. The exclusion criteria were (i) lack of available data and (ii) the following types of articles: news, previews, reports, reviews, comments, and discussions. When there were multiple publications from the same period or in the same population, studies with publication bias were excluded from our meta-analysis. Rate ratio, risk ratio, odds ratio (OR), and hazard ratio (HR) were used as the different measures of RR in all included studies. Because the absolute risk of ovarian cancer is very low, these values were equal to the RR.

Two authors independently collected the following data from each study: first author of the study, publication date, location of the population studied, study period, number of cases or subjects and study population, exposure range, study-specific adjusted ORs, RRs, or HRs with their 95% CIs for the highest category of tea consumption versus the lowest, confounding factors for matching or adjustments, and Jadad scale from the literature. The methodological quality of the enrolled studies was assessed independently by two authors using the Jadad scale [39].

The RR’s adjusted for most confounding factors were used for the association across studies. The heterogeneity was assessed using I2 statistics. For the I2 statistic, heterogeneity was interpreted as absent (I2: 0%–25%), low (I2: 25.1%–50%), moderate (I2: 50.1%–75%), or high (I2: 75.1%–100%). Subgroup analyses were performed according to (i) adjustment for family history of cancer (yes/no), adjustment for menopause status (yes/no), adjustment for education (yes/no), adjustment for OCP use (yes/no), adjustment for BMI (yes/no), adjustment for smoking (yes/no); (ii) Jadad scale, impact factor, and study design; and (iii) country where the study was conducted. Pooled RR values and corresponding 95% CIs were estimated using the random-effect model [40], which assumed that the studies included in the meta-analysis had varying effect sizes. To investigate the potential sources of between-study heterogeneity, we carried out a meta-regression analysis and sensitivity analysis by excluding one study at a time to explore whether the results were significantly influenced by a specific study [41]. Publication bias was assessed using Egger’s and Begg’s tests [42, 43]. However, we did not evaluate a dose-response relationship between tea consumption and ovarian cancer risk due to the lack of date and the difficulty in converting from servings or other units into grams per day. Stata version 13.0 (StataCorp, College Station, TX) was used for statistical analysis. We also performed a meta-regression analysis to test the study design, geographical region.

The authors report no conflicts of interests. We confirm that none of the authors are related to authors of studies included in the meta-analysis.

3. Duska LR. Early Integration of Palliative Care in the Care of Women with Advanced Epithelial Ovarian Cancer: The Time Is Now. Front Oncol. 2016; 6:83.