Purpose: To explore the value of radiotherapy in C-SCLC patients, especially in those receiving a radical resection.

Conclusions: PORT can significantly improve the survival of C-SCLC patients with resected pathological pN2 stage. For the patients with a large percent of metastatic lymph nodes, PORT can also improve survivals.

The diagnosis of C-SCLC mainly depends on complete examination of pathological specimen after surgery. With the development of screening and surgical techniques, more and more patients with early lung cancer are diagnosed and have the opportunity to receive surgery and complete pathological examination as well, which led to the increase of diagnosed C-SCLC. Therefore, it is necessary to explore the value of postoperative radiotherapy (PORT).

PORT improves the treatment results in patients with pN+ SCLC, as well as those with pIIIA-N2 NSCLC. But PORT for C-SCLC is suboptimized although the treatment of C-SCLC mainly refers to the guideline of SCLC. Furthermore, due to the low incidence and lack of attention, there is no study focusing on PORT for C-SCLC yet. Our single institutional study aimed to elucidate the effectiveness of PORT on survival of C-SCLC patients and to identify the subgroups which may most likely benefit from PORT.

Totally 55 consecutive patients were enrolled. Characteristics of the patients are presented in (Table 1). The median age of the whole group was 58 years (range, 35–76 years). Thirty patients (54.5%) had the component of squamous cell carcinoma (SCC). The T stage was T1-2 in 34 patients (61.8%) and T3-4 in 21 patients (38.2%). The N stage was N0 in 23 patients (41.8%), N1 in 14 patients (25.5%) and N2 in 18 patients (32.7%), respectively. In addition, stage III counted the most by 47.3%. Regardless of the sequence, most patients received chemotherapy (76.4%). Of all 55 patients, 14 (25.5%) received PORT. Twelve out of the 14 patients had detailed records of radiation and all received intensity modulated radiation therapy. The median total radiation dose was 60 Gy (range, 50Gy-66Gy). Seven patients received a total dose ≥60Gy and 5 patients less than 60Gy. The clinical characteristics were comparable between the PORT group and non-PORT group, except that there were more N0-1 patients and more patients receiving chemotherapy and less patients receiving PCI in the non-PORT group (as shown in Table 1).

Survivals in the whole group 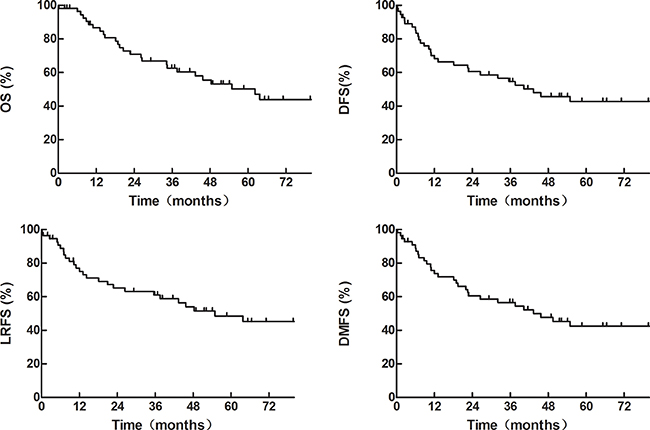 Figure 1: OS, DFS, LRFS and DMFS of the whole group of 55 patients.

Effect of radiotherapy on survivals 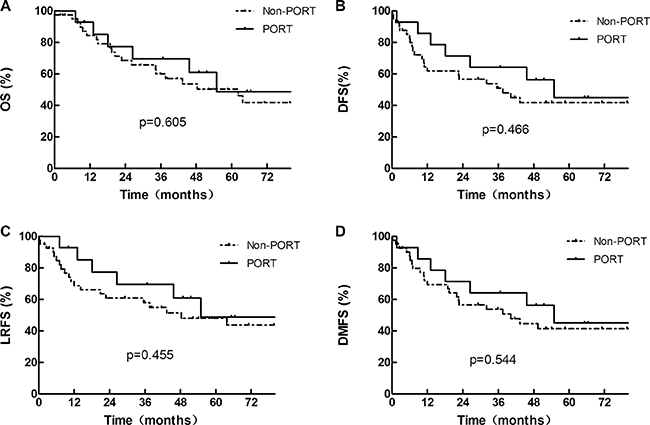 Figure 2: OS, DFS, LRFS and DMFS of the whole group of 55 patients, divided according to whether or not receiving PORT.

Table 2: Effect of PORT on OS, DFS, LRFS and DMFS of patients with different factors 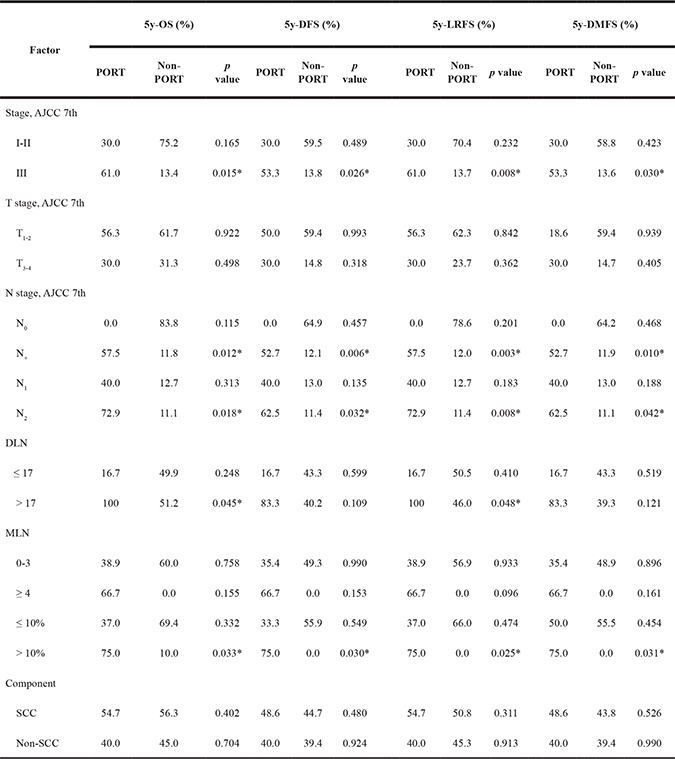 C-SCLC contains the component of both SCLC and NSCLC. However, there are different applications of PORT between SCLC and NSCLC. PORT improves the treatment results in patients with pN+ SCLC, but those with pIIIA-N2 in NSCLC. Therefore, it’s a question that whether C-SCLC should follow the guideline of SCLC or NSCLC or having its own when confronting the selection of PORT, especially in current circumstances that more and more patients were diagnosed as C-SCLC after surgery.

The rationale behind PORT is to kill malignant cells remaining in tumor bed, at the resection margins, or in the adjacent lymph nodes after surgery and so to reduce local and regional recurrences and improve survival. At present, the selection of PORT in C-SCLC mainly depends on the experience of doctors, lacking of clinical evidences. In both SCLC and NSCLC, PORT has certain indications. If giving PORT indiscriminately, there are clear evidences showing no benefit, even detrimental effects for patients with completely resected lung cancer [6, 7]. The meta-analysis published in 1998, which contained 9 randomized controlled trials and 2128 NSCLC patients, concluded that PORT was detrimental (HR 1.21, p = 0.001): twenty-one percent increase in the relative risk of death and 2-year survival rates of 48% for PORT and 55% for non-PORT group [6]. The updated results were largely unchanged [8]. Liu et al. [7] revealed that, in SCLC, the OS in the whole PORT group comparing with the non-PORT group was not significantly increased (p = 0.26). Consistently, our results show that for whole group, the survival rates are not different in the PORT group and non-PORT group. On multivariate analysis, PORT was also not significant prognostic factors. Therefore, recognizing the subgroups that could benefit from PORT is more meaningful.

In the treatment of SCLC, PORT is recommended to the patients with positive lymph nodes through the detection of surgical specimens. Liu et al. [7] revealed that PORT significantly reduced local-regional recurrence (LRR) and improved OS in patients with regional metastasis SCLC. In patients with N1 disease, the median OS were 40 months in the PORT group versus 14 months in the non-PORT group (p = 0.032). The corresponding OS in N2 patients were 35 months versus 17 months, respectively (p = 0.040). For patients with N1 disease, the 3-year LRR rate was 0.0% in the PORT group versus 14.3% in the non-PORT group (p = 0.037). The corresponding LRR rate in N2 patients was 4.2% versus 56.6% (p < 0.001). For NSCLC, the subset analysis of meta-analysis published in 1998 indicated that in patients with stage III or pN2, survival was slightly better with PORT [6]. In 2006, a retrospective analysis of the SEERs database including 7,465 patients also showed an increase in overall survival in pN2 disease (HR = 0.855, p = 0.0077) [9]. Dai et al. [10] presented that PORT could significantly improve the survival of patients with resected pathological stage IIIA–N2 NSCLC. Recently, Patel et al. [11] conducted a meta-analysis to evaluate the role of PORT based on the use of linear accelerators in pN2 lung cancer. The OS and LRFS of PORT group had both significantly improved (HR 0.77, p = 0.020; HR 0.51, p < 0.001, respectively). In our study, similarly as SCLC and NSCLC,, PORT could significantly improve OS, DFS, LRFS and DMFS of C-SCLC patients with stage III or pN2 stage. For these stages of C-SCLC, PORT may be recommended. Nowadays, the treatment of C-SCLC mainly refers to the guideline of SCLC. However, unlike SCLC recommending PORT in N1 disease, C-SCLC with N1 disease could not get benefit from PORT, which may due to the component of NSCLC. In the other hand, PORT didn’t influence the survival of patients with component of SCC or with non-SCC. This indicates that, although the component of NSCLC may affect the use of PORT, the specific kind of NSCLC makes no difference.

The survival rates of patients with a large ratio of involved lymph nodes were significantly improved when receiving PORT. It has been reported that the number of metastatic mediastinal lymph nodes was a significant prognostic factor. Local and distant control are decreased with the increase of positive hilar or mediastinal lymph nodes [12–14]. Other than the number of MLN, the ratio of MLN or the lymph node ratio (LNR) has been proposed as a more useful prognostic metric because of its incorporation of both the number of positive nodes and the total number of examined nodes. Damien et al. [15] analyzed the benefit of PORT by nodal stage and LNR. It turned out that a high LNR was associated with a poorer survival in resected node-positive NSCLC. This may be the reason why PORT could improve survival of these patients.

PORT may have an important position in the treatment of patients having more DLN. The frequency of distant metastases is still very high after the resection of primary tumor and cleaning of regional lymph nodes. Even more, the rate of distant metastases is significantly higher than the incidence of local failure. Therefore, a survival benefit of PORT could only be acquired if microscopic metastatic disease is also effectively controlled. The more lymph nodes being excised, the less possibility of remaining disease. Thus the benefits obtained by using PORT can bring out.

As a retrospective analysis, our study has some limitations. First, all of the patients came from our single institution and the number of cases is limited. The results should be interpreted cautiously as selection bias may exist. Second, the median dose of RT in our data was 60 Gy, which is higher than the recommended dose of PORT for lung cancer and may cause an excess radiation pneumonopathy or cardiac disease. Third, the proportion ratio of each component of C-SCLC may have prognostic significance and play an important role in the selection of therapies. However, the information of our pathologic diagnosis is not detailed enough to support the correspondent analysis.

From Jan. 2004 to Dec. 2012, consecutive patients with pathologically diagnosed C-SCLC after complete surgery were enrolled. Patients with positive surgical margin were excluded. Initial evaluations included physical and hematological examination, chest CT scans or PET-CT, bronchoscopy, ultrasound, brain MRI and bone scan. Pathological diagnosis was based on specimens from surgery. C-SCLC was staged according to the 7th edition of the American Joint Committee on Cancer (AJCC) tumor-node-metastasis (TNM) classification system. The medical records and follow-up data of the patients were retrospectively analyzed.

The administration of radiation therapy was based on the attending radiation oncologist’s decision and partially the surgeon’s suggestion. The techniques of PORT included three-dimensional conformal radiotherapy (3D-CRT) and intensity modulated radiotherapy (IMRT). The clinical target volume (CTV) included the tumor bed, subcarinal nodes, ipsilateral mediastinum and ipsilateral hilum. The planning target volume (PTV) was defined as CTV plus 0.5 cm margins. PORT was administered with linear accelerator using 6 to 8 MV X-rays at 1.8Gy-2.0Gy per fraction, 5 days per week, to a total prescription dose of 60 Gy.

The Kaplan-Meier method was used to estimate OS, DFS, LRFS and DMFS. The difference of survival between patients with different factors was compared using the log-rank test. Statistically significant difference was set as p < 0.05.

For pathological N2 stage C-SCLC patients, PORT can significantly improve OS, DFS, LRFS and DMFS. Moreover, the patients with a large percent of metastatic lymph nodes also have significant beneficial survivals. In addition, the PORT group has higher OS and LRFS than the control when patients had a large number of DLN through surgery. Large-scale and multi-institution studies are needed to further evaluate the role of PORT in C-SCLC.