In the JAK2-mutated cohort, the median allele burden at last evaluation was not different respect to that at first evaluation, neither in ET (22.9% vs 23.2%, P = 0.216) nor in PMF (50.5% vs 45.0%, P = 0.809), despite a positive slope. Multivariate analysis to evaluate the effect of mutation (CALR vs JAK2) on the slope of mutant burden in not treated pts with a positive slope adjusting for diagnosis (ET vs PMF) showed a trend toward a higher increase of mutant burden in CALR vs JAK2 (β = 0.19, P = 0.061) with no difference between diagnosis (P = 0.419). The findings of this study suggest that clonal expansion in CALR-mutant MPN is faster than that observed in JAK2-mutant MPN.

Most patients with ET or PMF not associated with JAK2 or MPL alterations carry somatic mutations of CALR [2, 3]. The clinical course of CALR-mutated patients is more indolent than that of JAK2-mutated patients, having a lower risk of thrombosis in ET and a better survival in PMF [4–7]. Previous studies have reported that most CALR mutations are heterozygous [2, 3].

All 105 CALR-mutated patients remained positive at second evaluation: among the five secondary acute myeloid leukemia (AML) evolved from CALR-mutant MPN no cases of CALR negative AML was observed. This is in contrast with the observation that JAK2-mutant MPN frequently yields JAK2 negative AML [8, 9]. 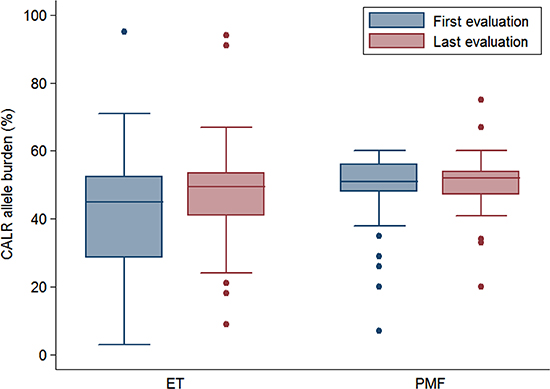 The delta CALR (difference between last and first CALR allele burden evaluation) according to time interval between first and last evaluation in ET and PMF is reported in Figure 2. 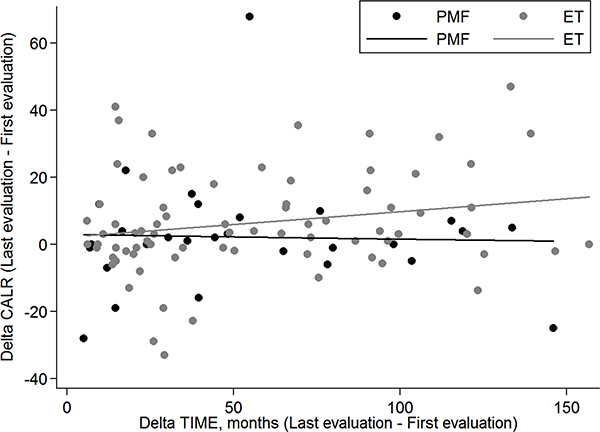 To investigate whether cytoreductive treatment might influence the mutant allele burden we divided patients in “Treated” (72 patients) if they had received at least one cytoreductive treatment before or between the two sequential evaluations and “Untreated” (33 patients) if they did not receive any treatment. Mann Whitney U test showed a difference between natural (0.178) and therapy-related slope (0.015) (P 0.005) in CALR-mutated patients. When repeating the same analysis in the two disorders separately, we confirmed a difference between natural (0.207, range −0.595;2.789) and therapy-related slope (0.015, range −1.114;2.352) in ET (P 0.006) but not in PMF (0.033, range −0.138;1.229 vs 0.012, range −5.526;1.22, P 0.451). The slope of CALR allele burden in treated and untreated ET and PMF is reported in Figure 3. To evaluate whether the difference between natural and therapy-related slope observed in ET might be due to the effect of interferon on the allele burden we compared the slope of ET patients treated with interferon (N = 7) with the slope of ET patients treated with other cytoreductive drugs (N = 45) but we did not find a statistically significant difference (P = .0883). Two CALR-mutated patients underwent allogeneic bone marrow transplantation (BMT) and obtained complete molecular remission at the first evaluation performed 100 days after BMT. 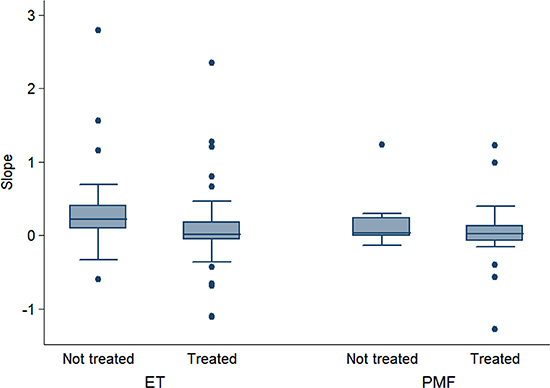 Figure 3: Slope of the CALR allele burden. Slope of CALR mutant alleles between sequential evaluations in patients with essential thrombocythemia (ET) and primary myelofibrosis (PMF). The left box-plot shows the natural slope obtained in patients who did not receive cytoreduction; the right box-plot shows the therapy-related slope obtained in patients who receive a myelosuppression. Mann Whitney U test showed a difference between natural and therapy-related slope in ET (P 0.006) but not in PMF (P 0.451) One treated PMF outlier patient (−5.526) was not represented for graphic reasons.

It has been previously shown that patients with high CALR-mutant burden had acquired copy neutral loss of heterozygosity of chromosome 19p, involving transition from heterozygosity to homozygosity for the CALR mutation [2]. At any rate 19pLOH appears to be relatively uncommon event [4], in contrast with 9pLOH in JAK2-mutant MPN and 1pLOH in MPL-mutant MPN [10, 11]. Accordingly, in our study cohort, only five CALR-mutated patients had a mutant allele burden equal or greater than 75%. In addition, the genotyping of the rs1049481 SNP in these cases was not informative in four patients, because of homozygosity both in granulocytes and in T lymphocytes. The single informative patient (heterozygous in T lymphocytes) showed homozygous granulocytes, thus confirming 19pLOH, likely as consequence of uniparental disomy, as previously shown [2].

Then we repeated the same analysis in a cohort of 226 JAK2-mutated patients with similar diagnosis. The median allele burden at last evaluation was not different respect to that at first evaluation, neither in ET (22.9%, range 1%–99.9% vs 23.2%, range 1.7–97.6%, P = 0.216) nor in PMF (50.5%, range 1%–99.1% vs 45%, range 1.5–98.6%, P = 0.926), although both JAK2-mutant ET and JAK2-mutant PMF showed a positive slope (0.007 and 0.012 respectively). This might suggest that the clonal expansion in CALR-mutant MPN is faster than that observed in JAK2-mutant MPN. To test this hypothesis and to evaluate the effect of the type of mutation (CALR vs JAK2) on the slope of mutant burden adjusting for the effect of diagnosis (ET vs PMF), we performed a multivariate linear regression in all untreated patients (to avoid the potential influence of cytoreduction). Among patients with a positive slope, we observed a trend toward a higher increase of mutant burden in CALR vs JAK2 (β = 0.19, P = 0.061) with no difference between diagnosis (P = 0.419), as reported in Figure 4. 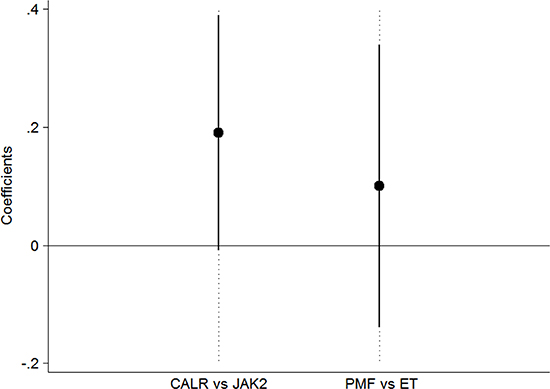 Figure 4: Effect of the mutational status on the slope of mutant burden. Multivariate regression with slope as outcome and mutation and diagnosis as covariates. The analysis was carried on the subgroup of patients with essential thrombocythemia (ET) and primary myelofibrosis (PMF) who were untreated to avoid the potential influence of cytoreduction. There was a trend toward a higher increase of mutant burden in CALR vs JAK2 (β = 0.19, P = 0.061) with no difference between diagnosis (P = 0.419).

Taken together, these results suggest that the CALR-mutant stem cell would achieve clonal dominance much faster than the JAK2-mutant one and confirm the model initially proposed [12] in which the clonal evolution of CALR-mutant MPN appears to be mainly associated with a progressive expansion of a mutant heterozygous clone that eventually becomes fully dominant in the bone marrow. Anyway, the sequential evaluation of CALR-mutant burden is not recommended in the clinical practice as it lacks clinical utility.

Inclusion in the current study required a diagnosis of ET or PMF, availability of clinical data at diagnosis and during follow-up and at least two DNA samples to assess variations of mutant allele burden.

We identified in our database a total of 105 consecutive patients with CALR-mutant ET and PMF (76 patients affected with ET, 29 patients affected with PMF). This cohort was compared with a cohort of 226 JAK2 V617F-mutated consecutive MPN patients with similar diagnosis (183 patients affected with ET, 43 patients affected with PMF). The two cohorts were diagnosed and followed at the Department of Hematology Oncology, Fondazione IRCCS Policlinico San Matteo Pavia from 1985 to 2014. Their clinical characteristics are reported in Table 1. This study was approved by the Ethics Committee of Fondazione IRCCS Policlinico San Matteo, Pavia, Italy. The procedures followed were in accordance with the Helsinki Declaration, and samples were obtained with patients’ written informed consent. Diagnosis of MPN was made in accordance with the criteria in use at the time of the first observation.

Granulocytes’ DNA from peripheral blood was used for molecular analysis. CALR exon 9 mutations were assessed with Sanger sequencing, as previously reported [4]. The evaluation of CALR-mutant burden was done comparing the height of the mutated and wild type peaks. To assess the sensitivity of our technique, genomic DNAs from patients with 50% CALR mutant allelic burden (assessed by fragment length analysis [2]) were diluted into DNA from a healthy control. With the use of 40 ng of matrix DNA, dilutions up to 1:8 for type 1 deletion and 1:16 for type 2 insertion still produced detectable and valuable mutant traces, indicating a sensitivity of the method of approximately 6% and 3%, respectively. Sanger data were validated in an independent cohort of 98 CALR-mutated patients previously evaluated using fragment analysis (median CALR-mutant burden: 47%; range: 10–100) [2]. This cohort included 34 samples of the study cohort. No false-negative samples were found using Sanger analysis and the comparison of CALR-mutant burden obtained with the two methods showed a very high Pearson’s correlation (ρ 0.94, P < 0.001). Sanger sequencing allowed also the genotyping of the rs1049481 [13].

A quantitative real-time polymerase chain reaction (qRT-PCR)-based allelic discrimination assay was employed for the quantification of the JAK2 V617F allele [14, 15]. The different types of CALR mutations were classified as type 1-like and type 2-like according to our previous study [16].

Quantitative variables have been summarized in terms of median and range or interquartile range, while categorical variables were described by counts and percentage. The Wilcoxon signed-rank test for paired data was adopted to compare the median value of allele burden at last evaluation respect to the median value at first evaluation. As several patients had more than two sequential evaluations, the variation of allele burden during follow-up was evaluated by the slope of a regression model with allele burden analyzed as outcome and months of follow-up analyzed as independent variable: a slope value higher than 0 refers to an increase of allele burden during time while a negative slope value indicates a decrease of allele burden. The comparison of median slope between two groups was tested by the Mann-Whitney U test for unpaired data. The linear regression model was adopted to evaluate the effect of type of mutation and diagnosis on the slope. P-values less than 5% were considered significant. Statistical analyses were performed using Stata 12.1 (StataCorp. 2011. Stata Statistical Software: Release 12. College Station, TX: StataCorp LP) software.