Gastric cancer is a major health threat in China and other countries [1–3]. Although significant progresses have been made in pathological mechanism research and therapeutic strategies for this devastating disease, the prognosis is still poor [4–6]. Its incidence, on the other hand, has been steadily rising in China [7] and possible other countries [1, 8]. The application of the conventional cytotoxic agents and molecular-targeted agents is not satisfactory when facing pre-existing and/or acquired resistance [5, 6, 9]. Therefore, research focus is to understand the molecular mechanisms of gastric cancer tumorigenesis and progression, and to identify novel oncotarget proteins for this malignancy [5, 6, 9].

Autophagy is important in the progression of a number of cancers [10–15]. Although some studies suggested that autophagy might promote cancer cell death, many others have proposed that autophagy is indeed important for cancer cell survival and apoptosis-resistance [13, 14, 16, 17]. Among all the autophagy-related genes (ATGs), Ulk1 (UNC51-like kinase 1) serves as a key upstream signaling for autophagy initiation [18–21]. This serine-threonine kinase is the mammalian orthologue of yeast ATG1 [18–21]. Ulk1 forms a complex with Atg13, FIP200, and Atg101, which is required to start autophagy [18–21]. It expression and potential functions in human gastric cancer were tested in the current study. 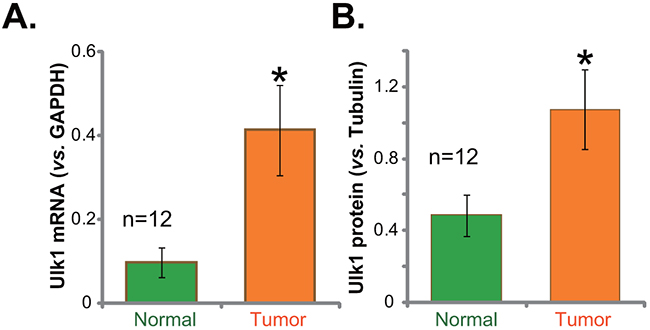 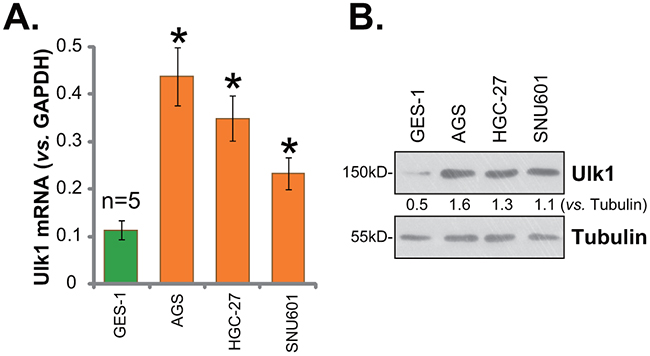 In order to study the function of Ulk1 in gastric cancer cell survival, shRNA strategy was employed. As demonstrated, two distant lentiviral Ulk1 shRNAs (“1#” and “2#”), with non-overlapping targeting sequence, were applied here. As shown in Figure 3A and 3B, the two Ulk1 shRNAs (“1#” and “2#”) both efficiently downregulated Ulk1 in AGS gastric cancer cells. Ulk1 protein (Figure 3A) and Ulk1 mRNA (Figure 3B) were both decreased after infection of the shRNA. Notably, Ulk1 shRNA-2# was significantly more efficient than Ulk1 shRNA-1# in silencing Ulk1 (Figure 3A and 3B). MTT assay was applied next to test survival of above cells. Results in Figure 3C demonstrated that Ulk1 shRNA knockdown decreased MTT viability OD of AGS cells, indicating an anti-survival activity by Ulk1 shRNA. Meanwhile, AGS cell proliferation, tested by the BrdU ELISA assay, was also inhibited after Ulk1 knockdown (Figure 3D). On the other hand, basal cell apoptosis intensity was enhanced following Ulk1 depletion in AGS cells (Figure 3E). Cell apoptosis was quantified via the Histone DNA ELISA assay (Figure 3E). Notably, Ulk1 shRNA-2# was more dramatic than Ulk1 shRNA-1# in inhibiting AGS cell survival (Figure 3C), proliferation (Figure 3D), and promoting cell apoptosis (Figure 3E). 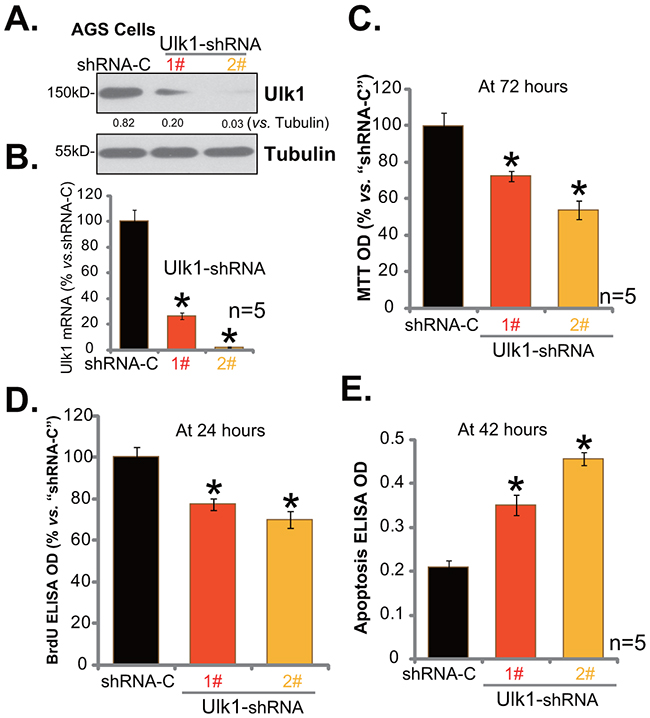 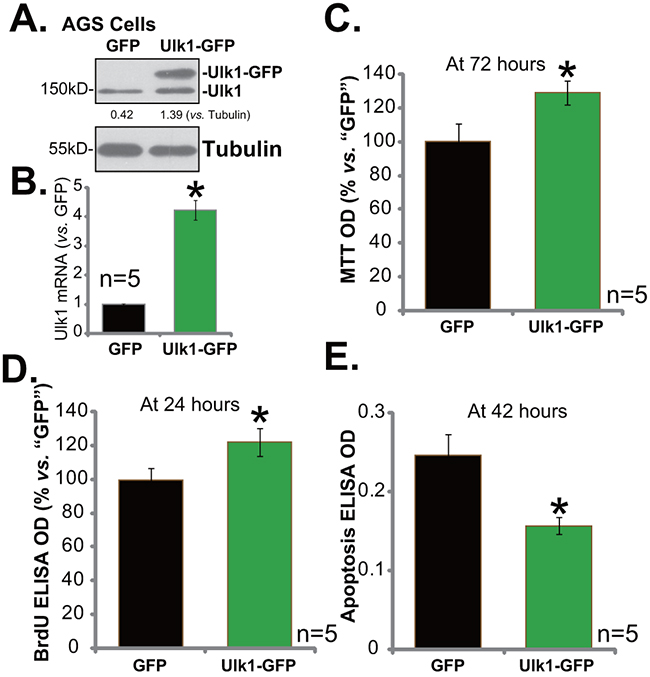 To further test Ulk1 expression, we examined its level in paraffin-embedded tissues via immunohistochemistry (IHC) staining. A total of 145 patients with gastric cancer (112 males and 33 females; mean age 58.9 years, Table 1), administrated at author’s hospital, were enrolled. Among all the patients, 25, 34 and 86 patients were at stage I, II and III, respectively (based on AJCC TNM staging system). Their paraffin-embedded cancer tissues were tested. 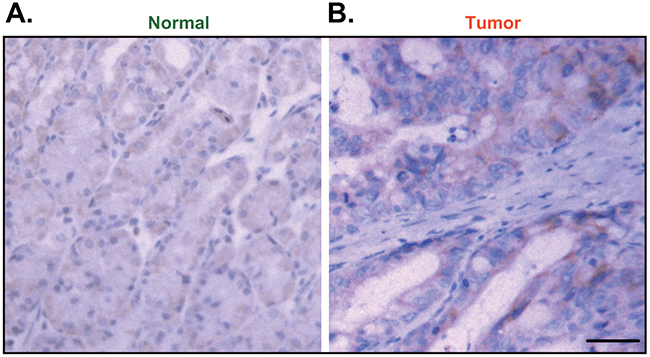 Although sustained and intensified autophagy could promote cell death (“autophagic cell death”), minor and moderate autophagy, seen in the majority of occasions, could promote cell survival [12–15]. In those cases, cellular components are digested to provide nutrients and energies for cell survival [12–15]. This process shall help cells to survival under conditions like hypoxia and nutrient/growth factor deprivation, which are frequently happening in cancer cells [23–25].

The process of autophagy starts with formation of the double membrane vesicles (autophagosomes) in the cytoplasm, which degrade cytoplasmic materials by acidic lysosomal hydrolases [26]. Ulk1 is vital for autophagy initiation, via integrating signals from upstream sensors, including mTOR (mammalian target of rapamycin) and AMPK (AMP-activated protein kinase) [18]. For example, AMPK phosphorylates and activates Ulk1 to initiate autophagy [18, 21]. On the other hand, mTOR phosphorylates Ulk1 at different sites of AMPK, and inhibits Ulk1 activity [18, 21] to shut down autophagy. Recent studies have also proposed other mechanisms of Ulk1 in promoting cell autophagy and also mitophagy [10].

The established human gastric cancer cell lines, AGS, HGC-27, and SNU601, as well as the GES-1 gastric mucosal epithelial cells were obtained from the Cell Bank of CAS (Shanghai, China) at Dec 2013. Cells were maintained in RPMI/DMEM medium with 10% fetal bovine serum (FBS). The verification of each single cell line was described previously [29]. The reagents for cell culture were from Gibco (Shanghai, China).

Puromycin was provided by Sigma (Shanghai, China). All the antibodies in this study were purchased from Cell Signaling Tech (Danvers, MA).

Surgery-isolated human gastric cancer tissues were washed. Tumor tissues and surrounding normal tissues were separated. A total of twelve patients with gastric cancer were enrolled (8 male, 4 female, 42-67 years old). These patients received no other therapies prior to the surgery. Fresh tissues were stored in liquid nitrogen. Tissue lysis buffer (Biyuntian, Wuxi, China) was applied to homogenate the tissues [30–33]. The protocols using human samples were approved by the Internal Review Board (IRB) and Ethics Board (EB) of authors’ institutions. The written-informed consent was obtained each and every participant. All studies were conducted according to the principles expressed in the Declaration of Helsinki and national/international guidelines.

A total of 145 gastric cancer tissues (paraffin-embedded), collected from Dec 2012-Dec 2013, were analyzed via IHC analysis. As described [34, 35], the staining was performed on cryostat sections (4 μm) of fixed human gastric cancer tissues (or the surrounding normal tissues). Primary antibody (anti-Ulk1, 1:50) and horseradish peroxidase (HRP)-coupled secondary antibody (Santa Cruz) were added to the tissue slides. The peroxidase activity was visualized via the 3-amino-9-ethyl-carbazol (AEC) and MAYER solutions (Merck). Tissue samples with rich cells and easily observable spots were considered valid, where as those with folded slices, coloring failure, and spots without cells were considered invalid. The degree of immuno-staining was reviewed and scored independently by two observers based on the intensity of staining. Staining intensity was graded according to the following criteria: 0 (no staining), 1 (weak staining =light yellow), 2 (moderate staining= yellow brown), and 3 (strong staining= brown). Moderate and strong staining were utilized to define tumors with high Ulk1 expression, and no and weak staining were used to indicate low Ulk1 expression.

As previously described [29, 32, 37, 38], protein lysates (30 μg each lane) were separated by SDS-page gel (10%), and were transferred to the polyvinylidene difluoride (PVDF) membranes (Millipore). After blocking, membranes were incubated with specific primary and secondary antibodies. Enhanced chemiluminescence (ECL) reagents (Amersham, Shanghai, China) were applied for detection of the band. ImageJ software was utilized to quantify total gray of each band, and its level was normalized to Tubulin (loading).

Cells with applied treatment were incubated with BrdU (10 μM, Cell Signaling Tech, Shanghai, China). BrdU incorporation was determined in the ELISA format [33]. ELISA OD was utilized as an indicator or cell proliferation.

Quantification of cell apoptosis by the Histone DNA ELISA assay was reported in our previous studies [38, 32].

The two distinct Ulk1 lentiviral shRNAs (packed in GV428 vector), targeting non-overlapping sequence of human Ulk1, were designed by the Genepharm (Shanghai, China). These two shRNAs were added directly to AGS cells (with 50-60% of confluence). After 24 hours, virus-containing medium was replaced with fresh complete medium. Stable AGS cells were then selected by puromycin (2.5 μg/mL, Sigma) for another 3 days. Expression of Ulk1 in the stable cells was verified by Western blotting assay and qRT-PCR assay.

The Ulk1 cDNA, provided again by Genepharm, was cloned into the pSuper-puro-GFP vector [29], which was transfected into AGS cells via Lipofectamine 2000 (Invitrogen). After 24 hours, cells were re-plated on selection medium containing puromycin (2.5 μg/mL, Sigma). Expression of Ulk1 (GFP-tagged) in the resulting cells was tested by Western blotting assay and qRT-PCR assay.

The SPSS software 15.0 version was used for statistical analysis. The χ2 test was applied to analyze the relationship between Ulk1 expression and patients’ clinical features. P values for all comparisons were two-tailed. Statistical significance was deﬁned as P <0.05 for all tests.

The authors have no conflict of interests.