3Department of Neurology, Affiliated to The First People’s Hospital of Chenzhou 423000, P.R. China

Background: Aldo-keto reductase family 1, member B10 (AKR1B10), is known to be significantly induced in the cells of various cancers such as breast cancer. However, the mechanisms of AKR1B10 promoting tumorigenesis in breast cancer remain unclear. In the present study, we demonstrated the potential role and mechanism of AKR1B10 in the invasion and migration of breast cancer cells.

Methods: The expression level of AKR1B10 in breast carcinoma, para-carcinoma and cancer tissues were detected by immunohistochemical evaluation and real-time polymerase chain reaction (RT-PCR), and the correlationships between AKR1B10 expression and clinicopathological features in breast cancer patients (n=131) were investigated. AKR1B10 was ectopically expressed in MCF-7 cells or silenced in BT-20 cells. The roles of AKR1B10 expression in the migration and invasion of MCF-7 cells and BT-20 cells were explored by wound healing assay, transwell migration assay and transwell matrigel invasion assay, and finally the activation level of extracellular signal-regulated kinase 1/2 (EKR1/2) activation and the expression level of matrix metalloproteinase-2 (MMP2) and vimentin in MCF-7 and BT-20 cells were measured by western blot.

Results: We found that AKR1B10 expression was increased in malignant tissues, which was correlated positively with tumor size, lymph node metastasis (p<0.05). MCF-7/AKR1B10 cells displayed a higher ability of migration (43.57±1.04%) compared with MCF-7/vector cells (29.12±1.34%) in wound healing assay, and the migrated cell number of MCF-7/AKR1B10 was more (418.43±9.62) than that of MCF-7/vector (222.43±17.75) in transwell migration assay without matrigel. We furtherly confirmed MCF-7/AKR1B10 cells invaded faster compared with MCF-7/vector cells by transwell matrigel invasion assay. Finally, we found AKR1B10 induced the migration and invasion of MCF-7 and BT-20 cells by activating EKR signaling, which promoted the expressions of MMP2 and vimentin. PD98059, a specific inhibitor of the activation of MEK, blocked the migration and invasion by inhibiting the expression of MMP2 and vimentin.

Conclusions: AKR1B10 is overexpressed in breast cancer, and promotes the migration and invasion of MCF-7 and BT-20 cells by activating ERK signaling pathway.

Breast cancer is the most common malignant tumor in female, and its incidence and mortality increased rapidly in recent decades. The long-term survival of breast cancer after surgical or chemotherapy treatment still remains poor, for its high recurrence and metastasis rates. Breast cancer metastasis is the main cause leading to the patients’ death [1].

Aldo-keto reductase family 1, member B10 (AKR1B10), is primarily expressed in human colon and small intestine but overexpressed in breast cancer, hepatocellular carcinoma, non-small cell lung carcinoma, cervical and endometrial cancers [2–9]. Our previous studies have shown that AKR1B10 is secreted through a lysosome-mediated non-classical pathway, which leads to the increase of AKR1B10 in the serum of breast cancer patients. And its expression level is positive correlated with the lymph node metastasis of breast cancer [2, 10]. However, the molecular mechanisms of AKR1B10 promoting the metastasis of breast cancer remain largely unknown. Thus, the exact mechanisms have been always required for exploring the use of AKR1B10 as therapeutic target in cancer clinics.

The extracellular signal-regulated kinase (ERK) signaling pathway is a major determinant in the control of diverse cellular processes such as proliferation, survival, differentiation and motility and is often activated in human tumors. This pathway stimulates the expressions of the matrix metalloproteinase (MMP) gene, which is required for the induction of cell motility via the degradation of the extracellular matrix, and vimentin gene, which is an important protein in deformation and movement of tumor cells. Elevated expression of MMPs and vimentin are associated with increased metastatic potential in many tumor cells [11].

In this study, we investigated the potential involvement of ERK signaling pathway in AKR1B10-associated breast cancer cell migration and invasion in vitro. 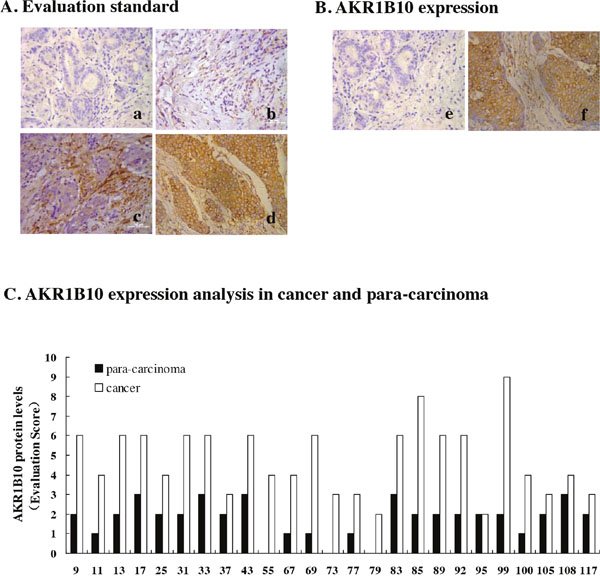 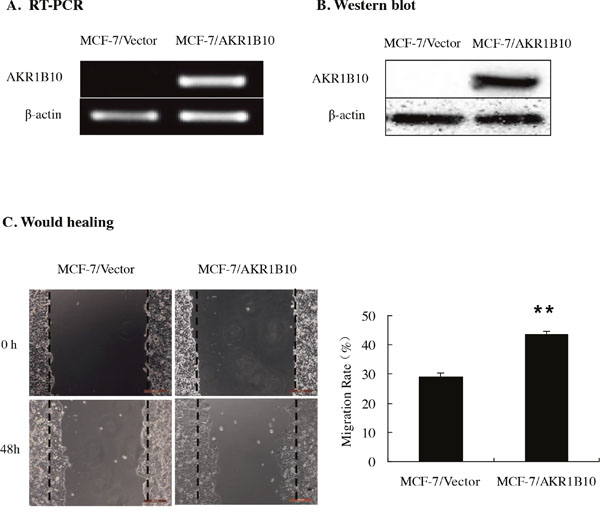 Figure 2: Effect of AKR1B10 on wound healing ability of MCF-7 cells. (A and B) The expression levels of AKR1B10 were detected in MCF-7 cells by RT-PCR (A) and Western blot. AKR1B10 was ectopically expressed in MCF-7 cells. (C) The effect of AKR1B10 on the migration of MCF-7 cells by wound healing assay. Scale bar = 200μm. Representative images are shown on the left panel, and the statistical graphs on the right panel indicating the average number of cells per field 48 h after transfection (**p < 0.01, compared with MCF-7/Vector). 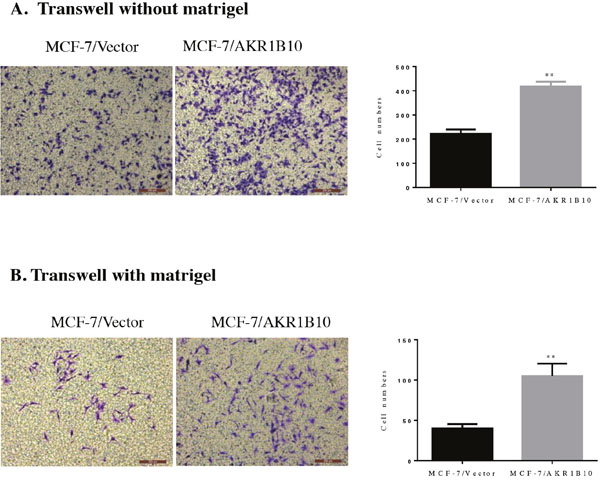 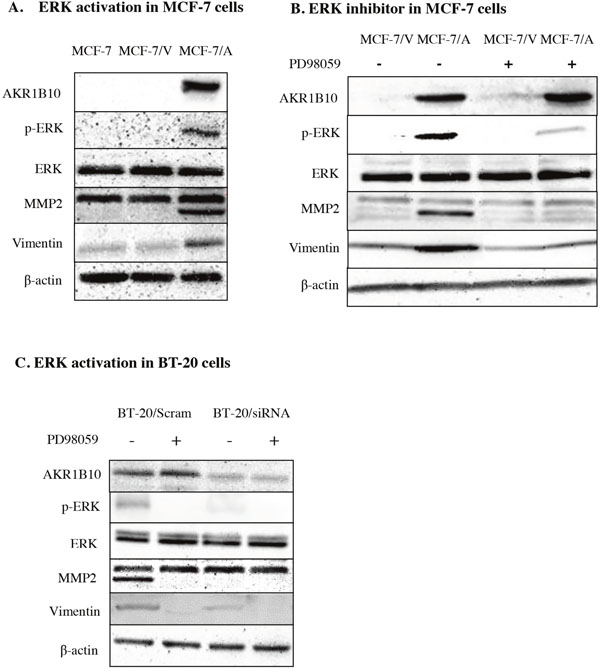 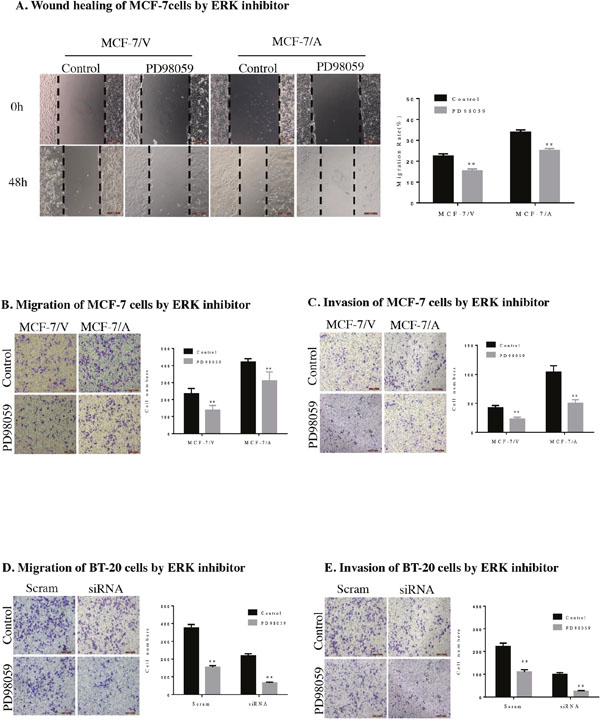 In our study, we demonstrated that ectopic expression of AKR1B10 promoted breast cancer cell migration and invasion through activation of ERK signaling pathway and up-regulation of expression of MMP2 and vimentin. The ERK pathway mediates tumor metastasis via regulating the expression and activity of matrix metalloproteinases (MMPs). And it plays a critical role in ECM degradation, an important step during tumor metastasis [12-14]. As shown in Figure 4B, PD98059 (a specific inhibitor of the activation of MEK) appeared to inhibit the activation of ERK and the expression of MMP2 and vimentin in MCF-7/AKR1B10 and BT-20 cells.

We detected the AKR1B10 expression in breast cancer patients in China, and also analyzed the internal relation between AKR1B10 expression and the clinic pathological parameters of breast cancer. This result is consistent with previous research: AKR1B10 expression was correlated positively with tumor size and lymph node metastasis, but not correlate with the patient age or distant metastasis [2]. In our study, we demonstrated that ectopic expression of AKR1B10 promoted breast cancer cell migration and invasion through activation of ERK signaling pathway and up-regulation of expression of MMP2, and vimentin. The ERK signaling pathway are associated with tumor cell proliferation, invasion and migration. What interest us is that the AKR1B10 level was positively correlated with p-ERK1/2 expression. The expressions of MMP2, Vimentin protein were up-regulated in MCF-7/AKR1B10 cells compared with MCF-7/vector cell. So AKR1B10 not only is overexpressed in breast cancer, but also promotes the migration and invasion of MCF-7 cells by up-regulation AKR1B10 expression via the ERK signaling way in MCF-7 cells. The same results were observed in BT-20 cells by downregulating AKR1B10 expression with siRNA interfering. Migration refers to the behavior of the tumor cells to go to another place through deformation or movement, and vimentin promotes the deformation and movement of tumor cells. In this study, vimentin was upregulated by AKR1B10 and induced the deformation and movement of MCF-7/AKR1B10 and BT-20 cells. Invasion refers to the behavior of tumor cells to break through the basement membrane and infiltrate surrounding tissues; and the process of invasion also includes degradation of the basement membrane and extracellular matrix. MMP2 is an important extracellular matrix kinases. In this study, MMP2 was upregulated by AKR1B10 and promoted the invasion of MCF-7/AKR1B10 and BT-20 cells by degradation of extracellular matrigel in transwell invasion assay.

Paraffin-embedded breast cancer tissue specimens with clinical data (n=131) were obtained from the First People’s Hospital of Chenzhou City, China between 2014 and 2015. All cases were classified according to the World Health Organization (WHO) classification system and staged according to the TNM system. The Patients didn’t receive radiotherapy or chemotherapy prior to surgery. Normal tissue specimens (n = 70) from patients without malignant tumors were also obtained by endoscopy as controls.

Paraffin-embedded tissue sections were deparaffinized in xylene, washed with ethanol, rehydrated, and then incubated with fresh 3% (v/v) H2O2 for 10 min for eliminating endogenous peroxidase activity. After rinsed with distilled water, sections were washed three times with phosphate-buffered saline (PBS) for 5 min each time, and then incubated with 10% (v/v) normal goat serum (diluted with PBS) at room temperature for 20 min. The sections were incubated with rabbit anti-AKR1B10 antibody at 37°C for 1.5h, followed by incubating with HRP-labeled secondary antibody at 37°C for 30 min. Subsequently, the sections were stained with 3, 3-diaminobenzidine (DAB) for 5-10 min and counterstained with hematoxylin.

AKR1B10 cDNA was cloned into pSIN-EF2 vector, a modified lentivirus vector with puromycin resistant gene. The lentivirus vector pSIN-EF2-AKR1B10-Puromycin or control vector pSIN-EF2-Puromycin was transfected into 293T cells together with auxiliary plasmids pSPAX2 and pMD2.G to package lentivirus. After infected by the lentivirus, MCF-7/AKR1B10 monoclonal cell and MCF-7/vector cells were screened out through adding puromycin into the mediums at the concentration of 1μg/mL. The expression of AKR1B10 was detected by western blot. The MCF/AKR1B10 and MCF-7/vector cells were used in the following experiments. AKR1B10 was silenced in BT-20 cells using siRNA.

1 × 105 cells each well were seeded into a 6-well plate and cultured in a complete medium. When the cells grew to 75% confluence, the cell layers were wounded by a sterile pipette tip, and then washed with PBS for several times to remove cell debris, and continue to incubate with serum-free medium for 48 h. The cells migrated into wound surface, which was considered as the process of in vitro healing. The wound healing in vitro was photographed by an inverted fluorescence microscope and assessed with the rate of closure. The rate of wound healing = [(the wound width of 0 h – 48 h)/0 h wound width] × 100%.

Transwell chamber: 24-well, 8.0-μm pore membranes (Corning USA) was used according to the manufacturer’s protocol. 1 × 105 cells per well were seeded in the upper chamber in 100μL of serum-free medium, and 600μL of complete medium was added to the lower chamber as a chemoattractant at the same time. After incubated for 24 h at 37 °C, the cells remaining at the upper surface of the membrane were removed with cotton swabs, and the cells on the lower surface of the membrane are the migrated cells. After fixed with 4% paraformaldehyde and stained with 0.1% crystal violet solution, the cells that passed through the filter were photographed by inverted fluorescence microscope.

The transwell invasion assay was carried out as described above, except that 100μL of 1:8 DMEM-diluted Matrigel (BD, USA) was added to each well at 37°C for 6 h before the cells were seeded onto the membrane, followed by incubating for 48h.

All experiments were performed in triplicate and statistical analysis was performed using two-sided student's t-test. For the clinical samples, AKR1B10 expression associated with the clinical parameters was analyzed with the χ2 test.

This study demonstrated that AKR1B10 promotes breast cancer metastasis at the cell levels in vitro and ex vivo clinical data. This study also demonstrated that AKR1B10 promotes breast cancer cell invasion and migration via the ERK axis pathway. Our results show that AKR1B10, as a new critical factor in breast cancer invasion and migration, may be a potential target for metastatic intervention. Further studies on the gene regulation of AKR1B10 will reveal an internal mechanism about its role on the development and progression of cancers.

The datasets were analysed during the current study available from the corresponding author on reasonable request.