Clinicopathological features of small cell carcinoma of the uterine cervix in the surveillance, epidemiology, and end results database

According to the National Cancer Institute, there were approximately 12,900 new cases diagnosed and 4,100 deaths due to cervix cancer in 2015 [1]. About 90% of cervical cancer patients are squamous cell carcinoma. Small cell carcinoma of the cervix (SCCC) is a rare disease accounting for approximately 2–5% of uterine cervix malignancies [2–4].

SCCC was first reported by Reagan et al. in 1957 [5]. Like small cell carcinoma in other body sites, SCCC is highly invasive and prone to distant metastatic spread [3, 4, 6–8], causing poorer prognosis than other types of cervical cancer. The 5-year survival rates vary from 0% to 51% of patients with SCCC [8–11]. However, the clinicopathological features and biological behavior of SCCC in above studies were including limited number of patients. The aims of this study were to investigate the clinicopathological characteristics and survival in patients with SCCC using Surveillance, Epidemiology, and End Results (SEER) database.

SEER database included 107,618 patients with small cell carcinoma and 65,761 patients with cervix cancer from 1988 to 2012. We included 487 patients with SCCC and a median age of 49 years (range, 19–95 years). The demographic, clinicopathological, and treatment characteristics are depicted in Table 1. The incidence of SCCC differed significantly according to age group. Patients with ages 40-49 years had a much higher incidence. 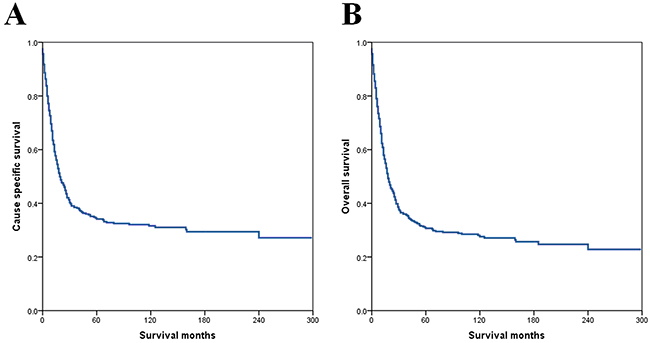 Figure 1: Cause-specific survival (A) and overall survival (B) for all patients. 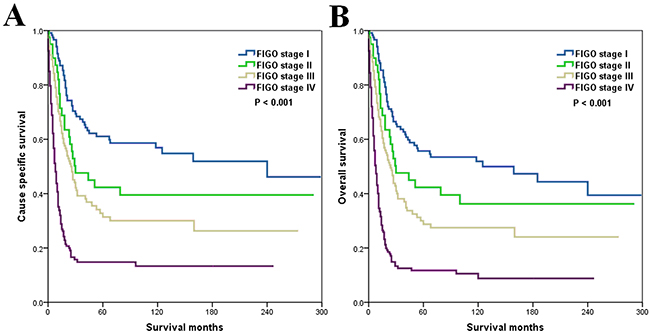 Figure 2: Cause-specific survival (A) and overall survival (B) according to International Federation of Gynaecology and Obstetrics stage.

Most of the knowledge in the SCCC comes from single-institution reports with a limited numbers of patients [12–14]. Here, we identified 487 patients of histologically confirmed SCCC between 1988 and 2012 from the SEER registry. Previous studies have showed that SCCC accounts for 2–5% of all cervix cancers [2–4]. The incidence rate in our study was 0.7%, which is lower than previously reported. About 98.5% of SCCC patients have poorly or undifferentiated histology. Therefore, it is important to distinguish SCCC from poorly differentiated cervical cancer.

No prospective data was available to compare surgery with primary radiotherapy for resectable SCCC. Chen et al. previously reported a lower locoregional failure rate in patients who received primary radiotherapy than those who had primary surgery in stage I-II SCCC (6% vs. 27%, P = 0.009) [15]. Cohen et al. found that the OS (38.2% vs. 23.8%) was improved in patients who received radical hysterectomy (68.1% and 26.7% of patients underwent surgery in stage I-IIA and IIB-IVA diseases, respectively) [8]. In our previous study, we have found that radical surgery was the effective treatment for stage I-II SCCC [16]. In the present study, patients receiving surgery ± radiotherapy had better survival than those treated with primary radiotherapy. This difference may be partially explained that patients receiving surgery are usually diagnosed with stage I-II SCCC and those undergoing primary radiotherapy are often diagnosed as stage III-IV SCCC. Although surgery remains an important modality for early stage SCCC, chemotherapy-dominant comprehensive therapy is considered the main treatment for patients with advanced SCCC [3, 4].

In this study, FIGO stage was also significantly related to survival of SCCC patients. Several studies have found that patients with advanced stage were associated with poor survival [11, 17–19]. A total of 37.9% of patients had stage IV disease at the initial diagnosis in this study. In other studies, 4.6–23.5% of patients had stage IV SCCC at the initial diagnosis [6, 11, 20]. The discrepancy in the proportion of patients with stage IV SCCC might be ascribed to the sample size. A worse survival outcome was also associated with increasing age on multivariate analysis. In patients with non-specific pathological type of cervical cancer, the poor prognoses associated with increasing age have been reported in our previous studies [21, 22]. However, age had no significant prognostic value in other studies with SCCC subtype [8, 9, 11, 23].

It has been reported that the incidence of lymph nodes metastasis vary from 39.4% to 70% of SCCC patients who receive lymph node resection [9, 11, 23], which was significantly higher than that in patients with squamous cell carcinoma and adenocarcinoma of the cervix [24, 25]. However, the prognostic role of nodal status in SCCC remains controversial. We found that 52.3% of SCCC patients had node-positive, and univariate analysis indicated that patients with positive lymph nodes had a poorer prognosis. However, multivariate analysis failed to identify lymph node status as a prognostic factor. Our findings were consistent with two retrospective studies by Liao et al. (n = 293) [23] and Wang et al. (n = 179) [11] with a relatively large number of patients. Therefore, more studies are warranted in the future to assess the prognostic value of lymph node status in SCCC patients.

The treatment modalities of SCCC and small-cell lung cancer are similar due to similar biological behavior including lymph node involvement, vascular invasion, and early recurrence [26–28]. Chemotherapy is an important component of multimodality therapy. Several studies have found that concurrent chemotherapy or adjuvant chemotherapy improved survival in SCCC [7, 8, 15, 29, 30]. In this study, we cannot analyze the effect of chemotherapy on the survival of SCCC patients due to the limitations of SEER database. The British Columbia Cancer Agency began using multimodality regimen including platinum-based chemotherapy in the treatment of SCCC in 1989 [7]. Several studies also showed that most of patients received multimodality therapeutic strategies including chemotherapy regimens after 1990 [11, 17, 29, 30]. We included patients between 1988 and 2012, who were in a chemotherapy-based treatment era, and the survival rates of different FIGO stage in our study were similar to those of previous studies [11, 17, 29, 30]. The SEER-Medicare database contains the chemotherapy data. However, only patients with 65 years or older were included in the SEER-Medicare database, which will significantly reduce the sample size and limit the generalizability of the study (101 patients older than 65 years in the present study).

The pathological factors including surgery margin, lymphovascular invasion and parametrial invasion are the prognostic factors of cervical cancer. SEER program also lacks the information of the above pathological factors. The prognostic value of above pathological factors in SCCC remains controversial. A study be Wang et al. showed that positive surgical margins was an adverse prognostic factor for failure-free survival (P < 0.001) but not in cancer-specific survival (P = 0.593), lymphovascular invasion and parametrial extension had no effect of survival in multivariate analyses [11]. However, the other two studies did not report the prognostic value of surgical margin on survival [9, 15]. Lymphovascular invasion and parametrial involvement were also found to have no prognostic value in SCCC [8, 15, 23]. Therefore, there were different prognostic factors in SCCC compared to squamous cell carcinoma and adenocarcinoma of the uterine cervix.

There are several limitations of this study. The first is the inherent biases existing in any retrospective study. However, the major strength of the present study is the ability to describe the epidemiology, clinicopathological features, treatment trends, and survival outcomes of this rare disease using a population-based study. Second, SEER database lack of information about centralized pathologic review, pathological factors (margin status, lymphovascular invasion, and parametrial invasion), details of radiation therapy and chemotherapy, and the data of local and distant recurrence. In addition, there is little information available to guide the choice of treatment in certain patients. Although prospective studies have a greater scientific impact than retrospective studies, prospective data on the outcome of different local treatment modalities in SCCC was not available.

In conclusion, SCCC is a rare disease with aggressive characteristics and prone to metastasize and is dismal in prognosis. Reduced survival was associated with increasing age, advanced stage, and treatment by primary radiotherapy. More studies are needed to confirm our results and develop optimal management of SCCC.

Data were obtained using SEER*Stat software (Version 8.2.1; available at http://www.seer.cancer.gov/seerstat) from the current SEER database, which is maintained by the National Cancer Institute and consists of 18 population-based cancer registries. We included SCCC patients from 1988 to 2012 and permission to access research data files was obtained [31]. The tumors were classified based on their primary site of presentation using the International Classification of Disease for Oncology, Third Edition. Data released from the SEER program did not require informed patient consent and this study was approved by the Ethics Committee of the First Affiliated Hospital of Xiamen University and the Sun Yat-Sen University Cancer Center.

The chi-square test and Fisher exact probability tests were used to evaluate the differences between qualitative data. Univariate and multivariate Cox proportional hazards model were used to identify prognostic factors predictive of CSS and OS. Multivariable analyses were used to identify independent prognostic factors that were significantly related to CSS and OS in univariate analyses. CSS and OS were calculated using the Kaplan-Meier method and compared using the log-rank test. The SPSS statistical software package, version 21.0 (IBM Corporation, Armonk, NY, USA) was used for statistical analysis. A value of P < 0.05 was considered to be statistically significant.