Overexpression of Fli-1 in astrocytoma is associated with poor prognosis

Background: Astrocytoma, a common and highly malignant type of brain tumor, is associated with poor overall survival despite advances in surgical treatment, radiotherapy, and chemotherapy. The nuclear transcription factor Fli-1 has been shown to increase cellular proliferation and tumorigenesis in many types of cancer; however, previous reports have not described a correlation between clinical outcomes and Fli-1 in astrocytoma patients. The present study aimed to elucidate the clinical role of Fli-1 in astrocytoma.

Results: High-level of Fli-1 protein expression was significantly association with World Health Organization (WHO) high grade and poor prognosis. A multivariate analysis revealed that the WHO grade and Fli-1 protein expression were independent factor of prognostic factors of patients with astrocytoma. In addition, Fli-1 silencing inhibited proliferation, migration, and invasion and led to the downregulation of Ki-67, VEGF, and cyclin D1 expression in the astrocytoma cells.

Materials and methods: Fli-1 protein expression in astrocytoma tissue samples were detected via immunohistochemistry, and potential correlations between clinical parameters and Fli-1 expression were assessed in patients with astrocytoma. Additionally, proliferation, invasion, and migration assays of astrocytoma cell lines were conducted to evaluate the effects of short interfering RNA (siRNA) on these processes; in addition, these cells were subjected to western blotting to detect the expression levels of Fli-1, Ki-67, VEGF, and Cyclin D1.

Astrocytoma is a common type of brain tumor in humans. According to the World Health Organization (WHO), astrocytomas can be classified into four grades [1]. Grade I astrocytomas, such as pilocytic astrocytomas, are benign and slow-growing, and grade II astrocytomas comprise relatively slow-growing diffuse tumors. However, grade III and grade IV tumors, exemplified by anaplastic astrocytoma and glioblastoma, respectively, are highly malignant. Grade III astrocytomas exhibit mitotic histopathology. Grade IV astrocytoma or glioblastoma is the most aggressive human malignant primary brain tumor and is characterized by histopathologic features, such as vascular thrombosis, microvascular proliferation, or necrosis. Despite advances in surgical treatment, radiotherapy, and chemotherapy, the overall survival of glioblastoma patients remains poor. Specifically, patients with a diagnosis of glioblastoma have the median survival period of only 12–15 months, with only 10% of the patients surviving 5 years [2] and a median survival of merely 3–4 months without treatment [3].

Fli-1 affects cellular proliferation and tumorigenesis in Ewing sarcoma and primitive neuroectodermal tumors [11, 12]., and additionally plays critical roles in normal development, hematopoiesis, and oncogenesis through its dual functions as a transcriptional activator and repressor [13–17]. Previous studies have shown that knocking-down Fli-1 leads to marked growth inhibition and death in erythroleukemic cells, indicating a possible use of Fli-1 as a therapeutic target to induce tumor suppression [18–20]. Other studies identified Fli-1 overexpression as a biomarker of certain cancers including melanoma [21], ovarian cancer [22], endometrial cancer [23], breast cancer [24], and nasopharyngeal carcinoma (NPC) [25]. However, no previous studies have identified a correlation between Fli-1 protein expression and the clinical parameters associated with astrocytoma. Therefore, the present study aimed to validate the clinical role of Fli-1 in patients with astrocytoma.

Of the 108 astrocytoma patients included in the study, 27 and 81 were >60 years and ≤60 years, respectively. In addition, 28 and 80 patients had grade II and III/IV astrocytoma, respectively, according to the WHO classification, and 74 and 34 cases had a Karnofsky performance score (KPS) of ≤70 and >70, respectively. Figure 1 presents examples of immunohistochemically stained sections exhibiting low and high levels of nuclear Fli-1. Chi-square analysis revealed a significant association between Fli-1 expression and the WHO grade (P < 0.001; Table 1).

Table 1: Correlation of Fli-1 expression with clinicopathologic parameters in patients with astrocytoma 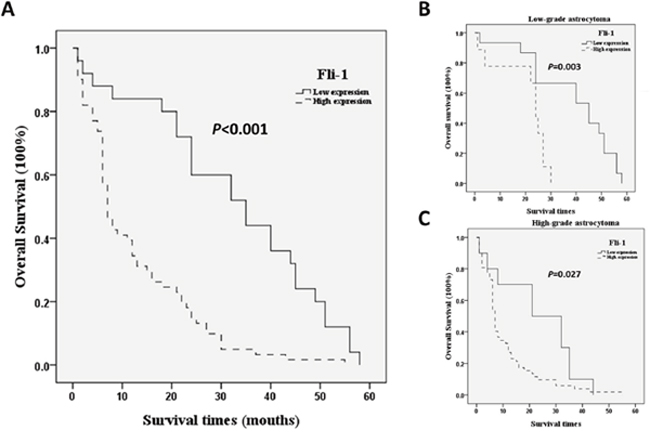 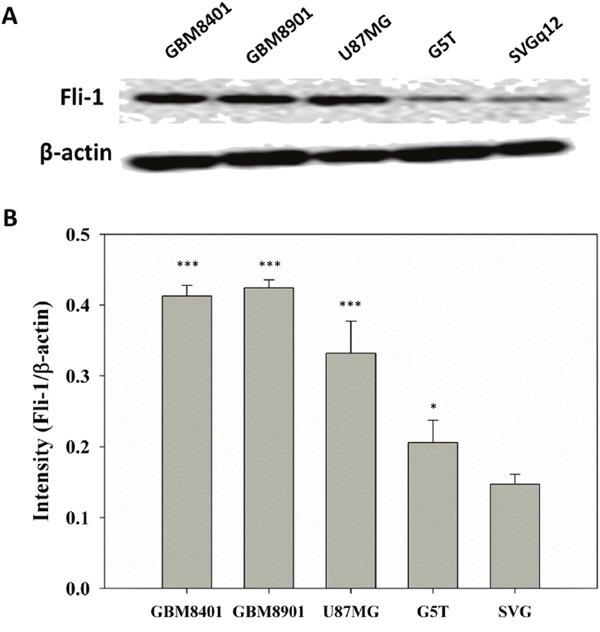 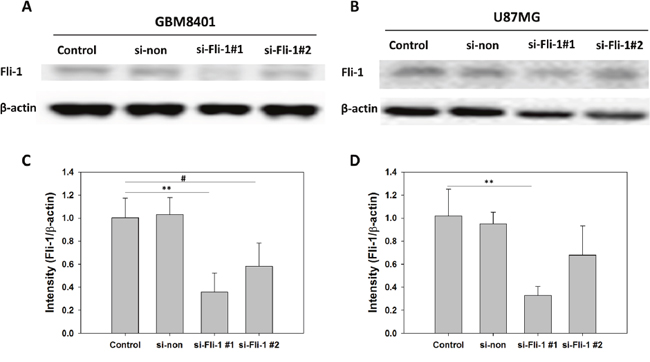 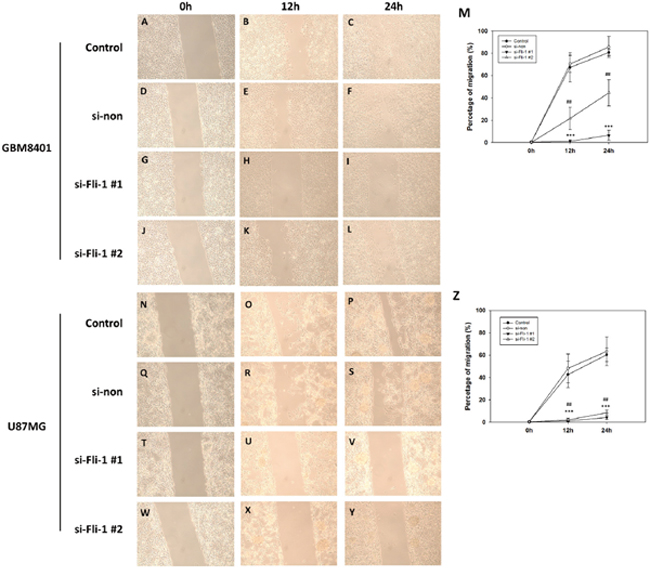 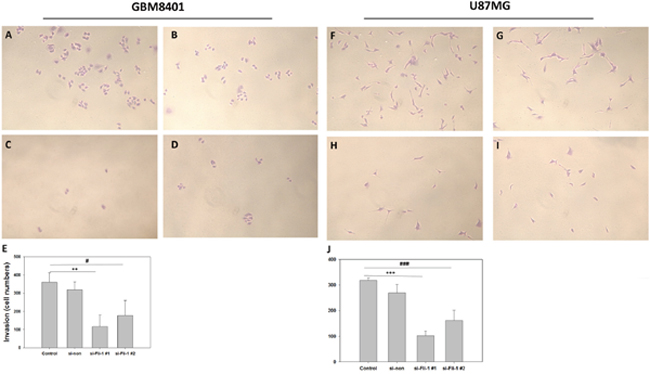 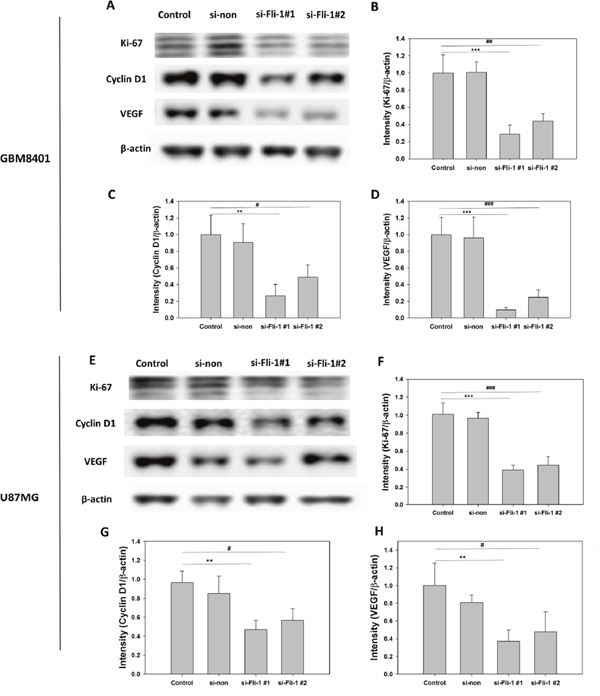 In the present study, a high Fli-1 expression level was associated with poor prognosis and a high WHO grade in patients with astrocytoma; in other words, Fli-1 expression associates strongly with survival in this patient population. Increasing expression of Fli-1 is associated with tumor development and may possibly with malignancy. In a previous study, Fli-1 knockdown reduced ovarian cancer cell proliferation but did not affect tumor metastasis [22]. However, in our study, Fli-1 siRNA-mediated knockdown inhibited the proliferative, migration, and invasion abilities of astrocytoma cells.

Previous studies have reported that Fli-1 was predominantly expressed in the nuclei of Ewing sarcoma and leukemia cells [27], whereas other studies of ovarian cancer tissues and SKOV3 cells reported mainly cytoplasmic expression of Fli-1 [22]. In our study, Fli-1 was detected in the nuclei of astrocytoma tissues, as well as GBM8401, GBM8901, U87-MG, and G5T cells. These data suggest that Fli-1 plays an essential nuclear role in astrocytomas. Moreover, previous studies support a potential function of Fli-1 through protein–protein interactions or as a nuclear transcription factor involved in cellular proliferation and tumorigenesis [17, 18, 28, 29].

The role of Fli-1 has been investigated in Ewing sarcoma and primitive neuroectodermal tumors; this potential role is implicated by the presence of a specific translocation t(11;22) that resulting in a fusion of EWS on chromosome 22 to FLI1 on chromosome 11 in 90% of cases of these tumors [11, 12]. Further speculation suggests that Fli-1 is widely expressed in various cancer tissues but plays different, tissue-specific roles. For example, angiogenesis is required to provide proliferating tumor cells with nutrients and metabolites, and tumor cells regulate angiogenesis by secreting factors that stimulate neovascularization. Epithelial cells have been reported to express high levels of Fli-1 [30], a feature that has also been observed in the majority of benign and malignant vascular tumors [31–33]. The EWS-Fli-1 fusion protein directly activates VEGF-A, leading to increased angiogenesis and malignant progression [34]. High-levels of VEGF, which plays a critical role in tumor initiation, have also been detected in the tumor microenvironments of Fli-1-overexpressing erythroleukemias [35]. These results indicate the potential usefulness of Fli-1 as a biomarker of angiogenesis.

Previous studies have defined a role for Fli-1 in erythroleukemic cell growth and differentiation. One such study demonstrated the binding of Fli-1 to an ETS consensus site in the context of cell growth maintenance [36]. ETS family transcription factors regulate the expression of oncogenes, tumor suppressor genes, and other genes associated with vessel formation, invasion, and metastasis, and their expression often correlates with poor survival in some types of cancers [21, 37–39]. Fli-1 plays a critical role in normal development, hematopoiesis and oncogenesis by functioning as both transcriptional activator and repressor [34, 40, 41]. Knocking-down Fli-1 expression in erythroleukemic cells leads to a marked growth inhibition and cell death, demonstrating a possible therapeutic approach to induce tumor suppression [42, 43]. The observation of strong Fli-1 expression in adenoid-like differentiated NPC suggests that NPC cancer cells might develop adenoid-like endothelium consequent to Fli-1-mediated gene expression. The EWS/FLI-1 fusion product promotes tumor angiogenesis by upregulating VEGF-A expression [34], and in our study, Fli-1 knockdown attenuated the expression of Ki-67, VEGF, and cyclin D1 proteins. These data supported a role for Fli-1 in the regulation of tumor progression.

For this study, we selected patients with astrocytoma who were treated at the Neurosurgery Department of Chung Ho Hospital, Kaohsiung Medical University between 2002 and 2014. Patients who were diagnosed by biopsy only or had incomplete medical records, no follow-up data, low-quality pathological results, or poor immunohistochemical staining were excluded. A total of 109 patients were selected for this study.

Immunohistochemical staining results were classified as low-level expression and high-level expression. Scores, which represented the proportions of positively stained tumor cells, were determined as follows: 0, no positive tumor cells; 1, <10% positive cells; 2, 10–50% positive cells; and 3, >50% positive cells. The staining intensity was classified as 0, no staining; 1, weak staining; 2, moderate staining; or 3, strong staining. The staining index (SI) was calculated by multiplying the intensity and percentage of positive tumor cells in each sample to yield possible scores of 0, 1, 2, 3, 4, 6, and 9. We set a total score of 4 as a cut-off; in other words, ≥4 was considered high Fli-1 expression, and <3 was considered low expression.

Cells were suspended in culture medium containing 10% FBS and placed in a 24-well plate at an approximate density of 1 × 104 cells per 0.5 ml of medium per each well. The cells were incubated as described above for 24 h, 48h, and 72h with 3-(4,5-dimethylthiazol-2-yl)-2,5-diphenyltetrazolium bromide (MTT) assay.

Cell migration was evaluated using a wound healing assay (80209; ibidi GmbH, Martinsried, Germany). For this assay, 6-well plates were coated with culture-inserts and incubated at 37°C for 12 h. Cells were seeded 70μl at a density of 5 x 105 cell/ml and incubated for 12 hours and 24 hours with 10μg/ml mitomycin C (Sigma) after 48 hours prior to siRNA transfection.

In vitro cell invasion assays were performed using Transwell chambers (COR3452; CORNING, Corning, NY, USA). Cells after siRNA transfection were seeded at a density of 1,000 cells per insert, and the lower chamber of each Transwell was filled with 2 ml of medium containing 10%FBS. After a 24-h incubation, cells remaining on the upper surfaces of the Transwell membranes were removed using cotton swabs. Cells that had invaded across the membranes to the bottom of the insert were fixed, stained, photographed, and quantified by counting the numbers of cells in 6 random high-powered fields.

Cells were detached from culture plates using trypsin, and centrifuged at 500 g for 3 min to obtain cell pellets. Each pellet was mixed with 200 μl of CER, mixed, and vortexed at a high speed for 15 s, followed by a 30-min incubation on ice. The mixture was vortexed again at a high speed for 5 s and centrifuged at 16000 g for 10 min at 4°C, after which the supernatant was removed and reserved as the cytoplasmic protein fraction. Next, 50 μl of NER was added to each pellet, followed by thorough high-speed vortexing for 15 seconds and incubation on ice for 30 minutes. During this incubation, the mixtures were vortexed for 20 s at a high speed every 5 min, followed by centrifugation at 16000 g for 30 mins at 4°C. The resulting supernatant was reserved as the nuclear protein fraction.

SPSS 19.0 software (SPSS, Inc., Chicago, IL, USA) was used for the statistical analysis. The chi-square test was performed to determine the existence of correlations between Sp1 protein expression and specific clinicopathologic parameters. The Kaplan–Meier method and log-rank test were used for the survival rate analysis. Multivariate Cox regression analyses were used to verify the independent effect of each variable evaluated in this study. A one-way analysis of variance (ANOVA) was used to compare the results of the proliferation, migration, and invasion assays. For all analyses, a p value < 0.05 was considered statistically significant.

In summary, Fli-1 was expressed in the nuclei of astrocytoma cells. A high level of Fli-1 expression was detected in high-grade astrocytomas and was associated with poor prognosis, and both the univariate and multivariate analyses identified an association of Fli-1 with the overall survival duration. Fli-1 knockdown attenuated the proliferation, migration, and invasion of astrocytoma cells and downregulated the expression of Ki-67, VEGF, and cyclin D1. These results suggest that the potential use of Fli-1 as a prognostic biomarker in patients with astrocytoma.

This study was supported by a grant from the Kaohsiung Medical University Hospital (KMUH-102-2R16 and KMUH103-3R18).

13. Melet F, Motro B, Rossi DJ, Zhang L, Bernstein A. Generation of a novel Fli-1 protein by gene targeting leads to a defect in thymus development and a delay in Friend virus-induced erythroleukemia. Mol Cell Biol. 1996; 16:2708-2718.