Breast cancer is the most common cancer in women [1]. Although the diagnostic techniques and therapies for breast cancer have been improved in past decades with the development of medicine and technology, cancer relapse, drug resistance, metastasis and other clinical features still lead to a high mortality in breast cancer patients [2]. Studies have shown that obesity has been regarded as an independent risk factor of breast cancer [3, 4]. Increased accumulation of adipose tissue is observed in obese people, and excessive pre-adipocytes and adipocytes lead to the dysregulated secretion of biologically active adipocytokines including leptin [5, 6].

Leptin is a secreted polypeptide with the molecular weight of approximately 16 kD [7, 8]. Several studies have demonstrated the close relationship between obesity and cancer [9–12]. Leptin is able to bind to the leptin receptor (ObR) and then activates the intracellular JAK/STAT, MAPK/ERK1/2 and PI3K/AKT pathways, promoting cancer progression [13]. Over-expression of leptin has been found to promote the proliferation, migration and angiogenesis of breast cancer cell, thereby accelerating the growth and metastasis of breast cancer [11, 14]. Therefore, it is imperative to develop effective strategies to inhibit the tumorigenic effects of leptin for obese patients.

Mounting evidence indicates a close relationship among bone morphogenetic proteins (BMPs), adipocytes and breast cancer [15]. BMPs belong to the transforming growth factor-β (TGF-β) superfamily [16], and were initially identified as osteoinductive cytokines that can promote bone and cartilage formation in vivo [17]. Recently, they have been shown to be involved in the regulation of tumor development and bone metastasis [18]. BMP9 (also known as growth differentiation factor 2)is a member of BMPs and has different functions in distinct cancers [19]. For instance, BMP9 can promote the proliferation and migration of liver cancer cells [20], but is able to inhibit the growth of osteosarcoma cells [21]. In a previous study, our results showed that BMP9 inhibited the growth, migration, and invasion of highly malignant MDA-MB-231 and HER2-positive SK-BR-3 cells [22–24], and suppressed the epithelial-mesenchymal transition (EMT) of breast cancer cells in the bone microenvironment [25]. However, the effects of BMP9 on the biobehaviors of breast cancer cells in adipose microenvironment remain unclear. In this study, we investigated the effects of BMP9 on the interaction of breast cancer cells and pre-adipocytes or adipocytes, and explored the potential mechanisms, which may provide evidence for the development of targeted therapy for breast cancer. 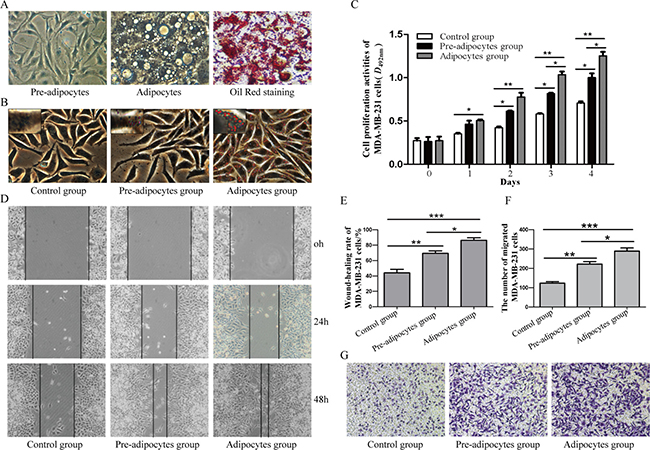 Expression of BMP9 in MDA-MB-231 cells after co-culture

MDA-MB-231 cells were transfected with recombinant adenovirus AdBMP9 (AdGFP as the control), and co-cultured with pre-adipocytes or adipocytes. RT-PCR (Figure 2A) and Western blotting (Figure 2B) showed that the mRNA and protein expression of BMP9 was significantly increased in MDA-MB-231 cells after transfection as compared to control group, suggesting BMP9 over-expression in these cells. 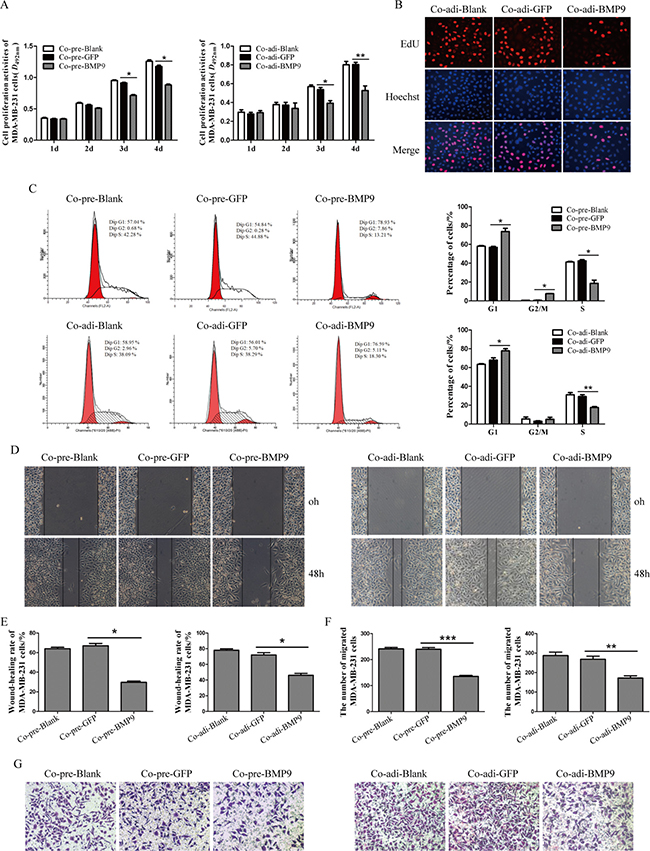 As shown in wound-closure assay and Transwell migration assay, the wound-closure rate and the number of migrated MDA-MB-231 cells in Co-pre-BMP9 group and Co-adi-BMP9 group were markedly decreased (P < 0.05) as compared to Co-pre-GFP group or Co-adi-GFP group (Figure 3D–3G). These results suggest that BMP9 suppresses the migration ability of MDA-MB-231 cells in the co-culture system. 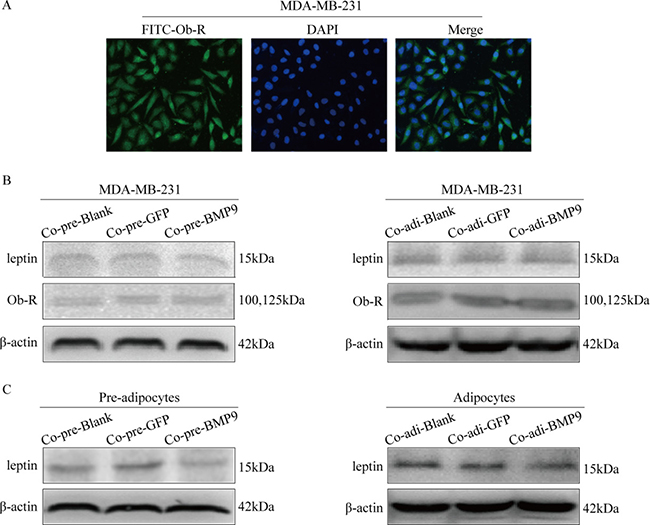 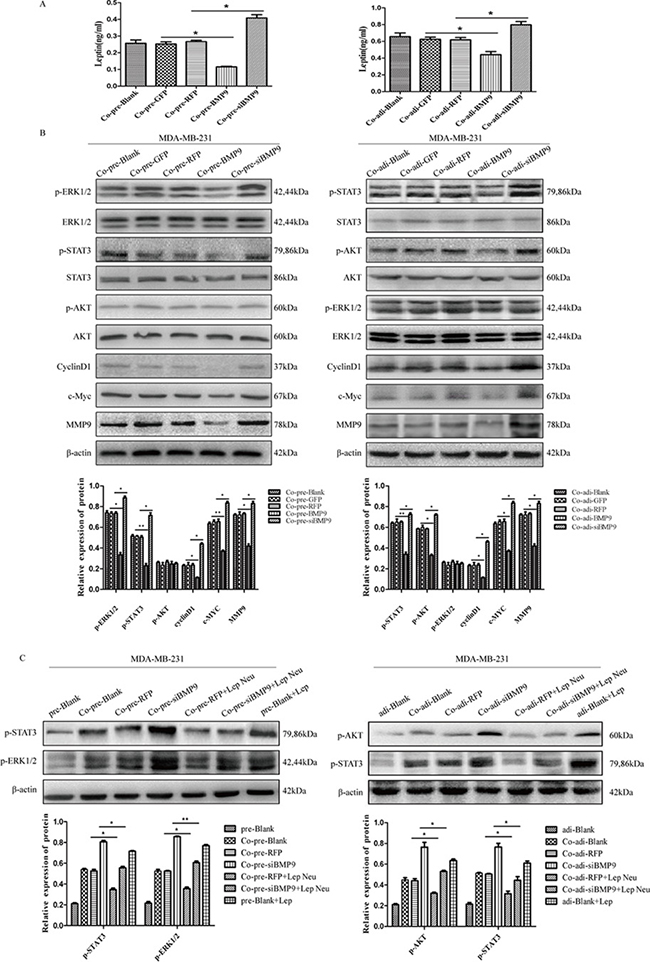 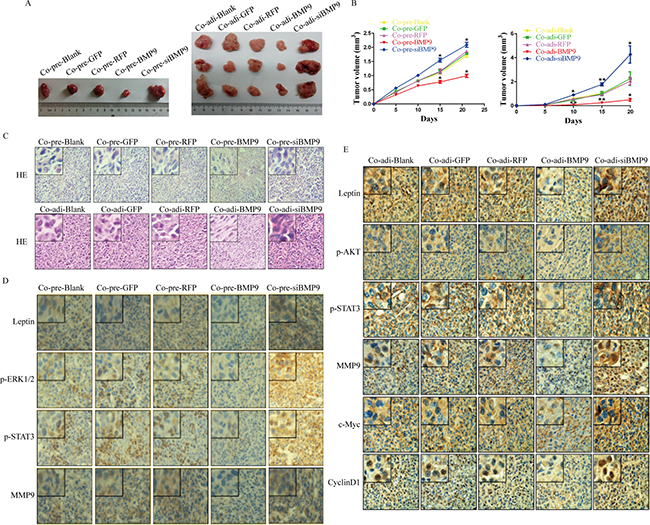 About 10–2 0% of breast cancer is triple-negative breast cancer (TNBC). Due to lack of endocrine and anti-HER2 therapeutic targets, TNBC often metastasize to the bone, brain and/or visceral organ in early stage, leading to a poor prognosis [26]. Recently, increasing studies focus on the relationship between obesity and cancer. Obesity may increase the risk for TNBC [27], which is, at least partially, ascribed to the influence of adipokine leptin [28]. Our previous studies demonstrated that BMP9 was able to inhibit the proliferation, migration and invasion of triple-negative MDA-MB-231 cells and HER2-positive SK-BR-3 cells, and promote their apoptosis in vitro and in vivo [23, 24]. In the present study, pre-adipocytes/adipocytes were co-cultured with MDA-MB-231 cells to mimic the adipose microenvironment, in which BMP9 was over-expressed in MDA-MB-231 cells. Our findings demonstrated that BMP9 could significantly inhibit the proliferation and migration of breast cancer cells and decrease the expression of leptin in pre-adipocytes and adipocytes of the co-culture system in vitro and in vivo. In addition, adipocytes were more potent to promote the growth of breast cancer cells than the pre-adipocytes were, but more studies are needed to prove that pre-adipocytes and adipocytes can promote the migration of breast cancer cells.

Furthermore, the antitumor effect of BMP9 against MDA-MB-231 cells in the co-culture system was also investigated in vivo. Our results indicated that BMP9 inhibited the tumor growth of xenografts in vivo, down-regulated leptin expression, inhibited the phosphorylation of STAT3, ERK1/2, AKT, and reduced the expression of c-Myc, CyclinD1 and MMP9 in the breast cancer, while opposite results were observed in Co-pre-siBMP9 group and Co-adi-siBMP9 group. These results demonstrate that BMP9 is able to inhibit the cancer growth and inactivate the leptin signaling pathway in vivo.

In conclusion, our finding show that BMP9 is able to inhibit the proliferation and migration of breast cancer in adipose microenvironment. The expression of growth and metastasis related factors (leptin, cyclinD1, c-Myc and MMP9) is decreased by BMP9. Leptin signaling pathway is involved in the anti-tumor effects of BMP9 in adipose microenvironment. These results are also confirmed in vivo. Thus, our study suggests that BMP9 may be used as a novel therapy for breast cancer.

3T3-L1 pre-adipocytes were cultured until 100% confluence. Then, they were induced to differentiate into mature adipocytes with induction medium (0.5 mmol/L methylisobutylxanthine, 1 μmol/ml dexamethasone, and 1 μg/ml insulin, and 10% FBS) for 2 days, with 2 μg/ml insulin for another 2 days, and finally with regular DMEM containing 10% FBS for additional 4 days.

Adipocytes were washed twice with phosphate buffered saline (PBS; pH 7.4), and then fixed with 4% paraformaldehyde for 30 min. 1.5 ml Oil Red staining solution was added to each well, followed by incubation for 30 min. After washing twice with PBS, cells were observed under a light microscope.

MTT assay was performed in quintuplicate to assess the viability of MDA-MB-231 cells in the co-culture system. After co-culture with 3T3-L1 pre-adipocytes or adipocytes, 500 μl of MTT solution (5 mg/ml; Progema, Madison, WI, USA) was added into each well, followed by incubation for another 4 h. Then, 3.75 ml of dimethyl sulfoxide was added to each well. The absorbance of each well was measured once daily for consecutive 4 days at 492 nm using a microplate reader, and a growth curve was delineated. Experiment was repeated three times.

In brief, MDA-MB-231 cells were collected after 3-day co-culture. Cells were washed twice with ice-cold PBS (pH 7.4) and re-suspended. Cell cycle analysis was done using a Xow cytometer and the CellQuest software package. Experiment was performed at least thrice.

A wound-closure assay was conducted to assess the migration of MDA-MB-231 cells. When the cell confluence reached 80%, a wound was made in the center of the cell monolayer with a 10-μl sterile pipette tip. After co-culture, cell migration was observed by a light microscope, and images were captured at 0, 24 and 48 h after the wound was made. The wound-healing rate was calculated as follow: (width at 0 h – width at 48 h)/width at 0 h × 100%. The experiment was performed thrice.

After co-culture for 2 days with 3T3-L1 pre-adipocutes or adipocytes, MDA-MB-231 cells were subjected to migration assay. Approximately 5 × 104 MDA-MB-231 cells were suspended in 0.4 ml of serum-free medium from the co-culture system. Then, the cell suspension was added to the upper chamber, and the medium from co-culture system supplemented with 10% FBS was added to the lower chamber as a chemoattractant. Twenty-four hours later, the migrated cells were washed twice with PBS, fixed in 4% paraformaldehyde and stained with crystal violet for 30 min. The migrated cells were counted under a light microscope at ×100 magnification. Means were obtained from five randomly selected fields in each well. The experiment was repeated three times.

Total RNA was extracted from MDA-MB-231 in the co-culture system using Trizol reagent (Invitrogen, Carlsbad, CA, USA) according to the manufacturer’s instructions. After reverse transcription, cDNA was amplified with 1 μg of total RNA using a Primer Script Kit (TaKaRa, Dalian, China). The mRNA expression of target genes was normalized to that of β-actin. Primers used in this study are shown in Table 1.

MDA-MB-231 cells in 24-well cell plate were washed twice with PBS and fixed with 4% paraformaldehyde for 30 min. Immunofluorescence staining was performed using Ob-R antibody (Santa Cruz, sc-8391, 1:200). Images were captured under a fluorescence microscope at 400×. 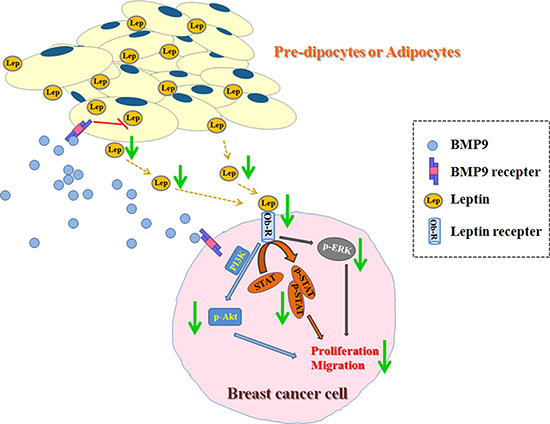 Figure 7: Effects of BMP9 on the biological behaviors of breast cancer cells in the co-culture system.

All experiments were approved by the Institutional Animal Care and Use Committee of the Chongqing Medical University. Four-week-old female nude mice (Balb/c, Beijing, China) were housed under specific pathogen-free condition. MDA-MB-231 cells were transfected with AdGFP, AdRFP, AdBMP9 or AdsiBMP9 in vitro. Pre-adipocytes (2.5 × 107 cells) or adipocytes (2.5 × 107 cells) and MDA-MB-231 cells (5 × 106 cells) were inoculated subcutaneously into female nude mice in different groups. Five days later, tumors were observable. Tumor volume was measured once every 5 days and tumor growth curve was delineated. Nude mice were sacrificed 20 days later, tumor tissues were collected, paraffin-embedded, and stained with hematoxylin-eosin.

Paraffin-embedded tumor tissues were sectioned. The sections were deparaffinized and rehydrated. After antigen retrieval in citric acid buffer, sections were treated with 3% hydrogen peroxide to block the activity of endogenous catalase, and then incubated with the primary antibody at 4°C overnight. After incubation with secondary antibody for 20 min, sections were visualized with 3, 3-diaminobenzidine tetrachloride. Finally, sections were counterstained with hematoxylin, and mounted.

All the data are presented as mean ± standard deviation and analyzed with SPSS 17.0. Student’s t test was used to determine the significant differences between two groups. A value of P < 0.05 was considered statistically significant.