Soft tissue sarcomas are rare and aggressive malignancies that develop from the mesenchymal tissue. The incidence rate has increased over the past 35 years as there are approximately 12,000 new cases of soft tissue sarcoma diagnosed and 4,800 deaths each year in the United States [1–3]. A recent report from the National Cancer Institute shows that the 5-year relative survival rate for soft tissue sarcoma is approximately 65% (http://www.cancer.gov/research/progress/snapshots/sarcoma) [4]. Systemic therapy options for sarcoma remain limited. Adjuvant radiotherapy plays a critical role in integrated multimodality treatment of sarcoma [5].

However, due to the complex heterogeneity of sarcoma, not all treated patients benefit from radiotherapy. For certain radiosensitive histological subtypes, such as myxoid liposarcoma, pre-operative radiotherapy may be particularly advantageous [6, 7]. Ewing’s sarcoma is also considered as a relative radiosensitive type [8]. A retrospective study has shown that preoperative radiotherapy might be not suitable for all patients with primary soft tissue sarcoma of the limbs [9]. Late and chronic toxicities of radiotherapy, such as severe induration, loss of subcutaneous tissue, subcutaneous fibrosis are often concerned [5, 10, 11]. Radiation-induced bone fractures are serious complications occurring in 2-20% of patients treated with limb-sparing surgery and radiotherapy [12]. Therefore, the survival benefit of radiotherapy on soft tissue sarcomas have not been observed significantly [13–15]. We argue that if we can develop a radiosensitivity signature, we might be able to identify right patients for radiotherapy.

In the era of precision medicine, personalized radiation therapy, through the use of biomarkers to guide exclusive radiotherapy and/or combination therapy, has started to emerge in recent years [16]. Various gene signatures with specificity in terms of diagnosis, prognosis or prediction of a therapeutic response have been developed and validated [17, 18]. Gene signatures have been used to predict radiosensitive patients in many cancer types, including glioblastoma, cervical, breast, colorectal, head and neck cancer cells [19–23]. However, there is no effective radiosensitive gene signature well developed for sarcoma.

In this paper, we utilized the RNAseq data for soft tissue sarcoma from The Cancer Genome Atlas (TCGA, http://cancergenome.nih.gov/) to develop a radiosensitive gene signature for predicting radiosensitive patients. Since sarcoma is a rare disease, it is difficult to find another independent dataset with survival outcome and enough RNAseq data to do independent-sample validation. Furthermore, due to the limitation of the small sample size in the TCGA dataset, it is not ideal to do split-sample validation. To overcome these difficulties, we performed an internal cross validation via the cross-validated adaptive signature design that combined the gene signature development and the validation test in a single pivotal trial, as introduced by Freidlin and Simon (2005) and Freidlin (2010) [24, 25]. Following this novel idea, we extended this approach to the proportional hazard model and developed a radiosensitive gene signature for predicting radiosensitive patients in sarcoma.

Development of a radiosensitive gene signature

Following the proposed procedure, we analyzed the current data set to obtain the tuning parameters by 10-fold cross-validation. The 10 loops could produce 10 combinations of tuning parameters and the gene signature might be different. Theoretically, the reselection of the significant genes for different loops of the cross-validation is essential to the validity of the approach [26]. However, it does not mean that the classifications and selection are unstable or that the classifier will not predict accurately for independent data. Genomic signatures are generally not unique [25, 27]. As suggested by Freidlin [25], to save computational time, the first cross-validation subset could be used to select the tuning parameter. The minimum p value (p=4.810E-04) was reached when the top 26 significant genes were included with a threshold nHR of 0.035 for predicting the sensitive patients. Supplementry Figure 1 presents the p-values profiles by log-rank tests between radiotherapy and nonradiotherapy groups when different tuning parameters combinations were used in the first loop of cross-validation procedure. Supplementry Table 1 shows the genes included in the radiosensitive gene signature and their interaction effects with radiotherapy.

Validation of the radiosensitivity prediction 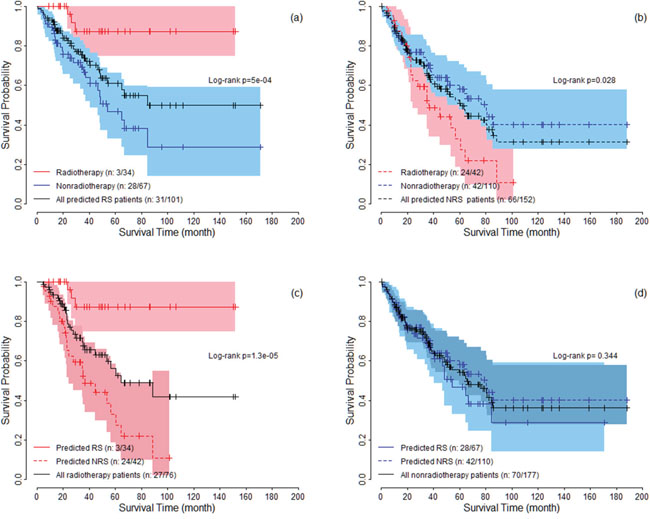 Associations among radiotherapy and clinical assessments after adjuvant treatments

Associations between radiosensitivity and clinical factors 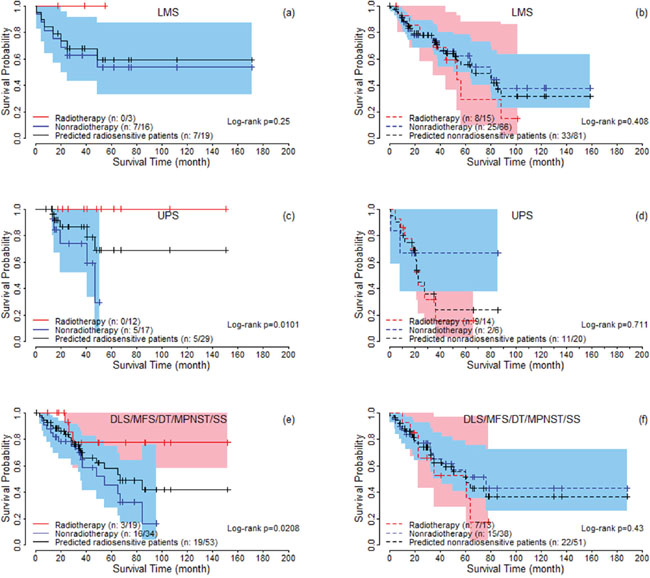 In addition, for patients who received radiotherapy, we compared the total dose for predicted sensitive (n=28) and nonsensitive patients (n=39) with available records. The medians of total dose (interquartile range) are 6300(6000-6420) and 6300 (6000-7010) for the two groups. There is no significant difference between the two groups with p value 0.1933 by Wilcoxon test. Moreover, there are 30 and 33 patients who received radiotherapy on primary tumor field for predicted radiosensitive and nonradiosensitive groups, respectively. There is no significant different between the distribution of radiation therapy site. The radiotherapy type is all external radiotherapy. These results suggest that total dose, radiation therapy site, and radiotherapy type are not a confound factor on the sensitivity prediction. 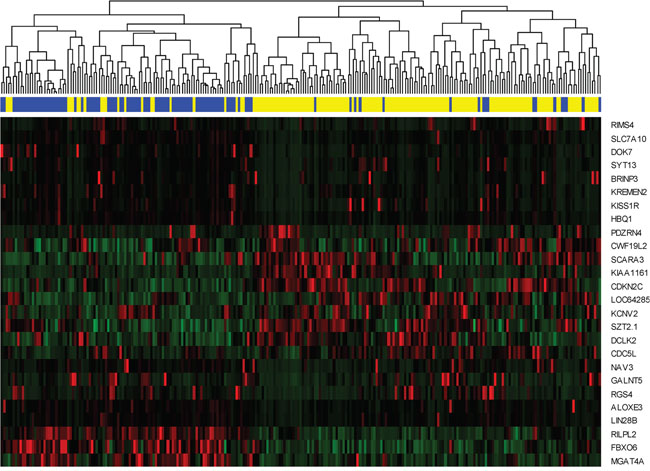 Incorporating radiotherapy with novel radiosensitive biomarkers or gene signatures might potentially increase the survival of patients with sarcoma. Although molecular mechanistic studies have shed lights for exploring radiosensitive gene signatures [28, 29], till now, knowledge is still limited about the molecular determinants of tumor radiatiosensitivity in the clinical setting. The inability to understand the fundamental molecular basis for sarcoma sensitivity or resistance to radiation prevents a risk-based clinical trial as well as target driven therapeutic strategies. In addition, due to the large number of genes available for analysis, the development of a reliable diagnostic classifier using early nonrandomized phase II data is often not feasible. Furthermore, validation data might also be limited for the rare sarcoma.

The developed gene signature is easy to apply for predicting new patients. According to the estimation of each genes in gene signature, one just calculate the HR for each gene using the standardized expression value of RNAseq, then compare the product of these HR (nHR) with the threshod 0.035. The patients can be predicted as radiosensitive patients if their nHR less than the threshold.

Our analysis not only developed a radiosensitive gene signature, but also detected genes which may be potentially associated with the molecular basis of sarcoma. For example, LIN28B, might be a potential oncogenic driver for sarcoma. A previous report suggested that LIN28B was involved in a predictive network for osteosarcoma [30]. Emerging evidence indicates that LIN28B is an oncogenic driver in cancer stem cells [31]. LIN28B has been identified to be overexpressed in a wide range of solid tumors and hematological malignancies, such as pancreatic cancer, ovarian cancer, atypical teratoid/rhabdoid tumor, neuroblastoma, oral cancer, et al. [32–38] It might suggest that LIN28B could be a therapeutic target in sarcoma.

KISS1R, which is also on the gene signature list, is a predictive marker for pancreatic cancer, lung cancer, breast cancer, renal cell carcinomas. Patients with KISS1R expression compared to that without expression usually have a favorable prognosis. Targeting the KISS1R signaling axis is considered as a promising strategy to inhibit invasiveness and metastasis [39–44]. However, the possible association among KISS1R and sarcoma has not been reported. RGS4 and SLC7A10 are two important genes directly associated with sarcoma in previous reports [45–47]. Other genes, such as ALOXE3, HBQ1, KREMEN2, SYT13, DOK7, CDC5L, and FBXO6, have been reported in several cancers [48–53]. These results may provide helpful clues for further research in sarcoma.

All data including clinical information and normalized RNAseq expression were downloaded from The Cancer Genome Atlas (TCGA, http://cancergenome.nih.gov/) (update at March 2016). Clinical data is available for 261 patients. Expression data included 259 patients for 20502 genes with clear gene names after removing duplicated patients from raw data with 265 samples. Genes having a maximum expression value of 10 were excluded as they showed almost no expression. Genes with proportion of zero expression more than 75% were also removed. We then standardized the expression data and combined the overall survival and other information together. Next, we merged standardized expression data with clinical information, and removed the patients with missing radiotherapy information. This resulted in 253 patients with 18166 gene expression profiles for the final analysis. Finally, any missing values in clinical data were filled by multiple imputation using the R package mice. The cleaned clinical data are summarized in Table 1.

In the present study, the radiosensitive patients are defined as a group of patients who have higher probability of survival if they receive radiotherapy. To develop the patient radioactive sensitive signature for predicting radiosensitive patients, we used the following modeling assumption: there is a subset of S predictive (“sensitive”) genes that significantly interact with radiotherapy. The survival benefit of radiotherapy is associated with these predictive genes through the Cox proportional hazards model:

If the radiotherapy-expression interaction effects are negative, patients who overexpress the sensitive genes will have a higher survival probability under radiotherapy compared with non-radiotherapy. We assume that a fraction of the patient population overexpresses some (but not necessarily all) of the sensitive genes. The total Hazard Ratio (HR) would tend to be less than a preset threshold value (such as less than 0.5). Then, these patients who had a relative high probability of survival are called radiosensitive patients.

Freidlin and Simon (2005) and Freidlin (2010) developed a novel cross-validated adaptive signature design to identify sensitive patients in clinical trial for binary outcome [24, 25]. Following their framework, we extended and modified this approach to proportional hazards model and applied it to develop radiosensitive gene signature for current sarcoma data. A K-fold cross-validated procedure for gene signature development is described by the following three-step procedure.

Step 1: Training step. Split the data into K parts with the same sample size randomly (usually K = 10). Then, (K – 1) parts are used as training data to fit models and predict the radiosensitive patients in the left-out part (validation data). In the training data, for each gene j, fit a Cox proportional hazards model: . Then, the p values for were used to rank the genes.

Step 2: Prediction step. Use the top significant g genes to build a gene signature, and calculate an index, called nominal HR (nHR) by , for patients in the validation data (k-th part). Here, could be the value averaged over the estimates from g single gene models. Patients in the validation set who has nHR lower than a specified threshold R will be classified as radiosensitive patients.

In the above procedure, there are two key tuning parameters: g and R in the Prediction step. The optimal values of the tuning parameters g and R are usually not known in advance. Therefore, all the possible combinations for g and R could be tried and tested. One can use a nested inner loop of K-fold cross-validation approach on the training data to select the best tuning parameters values without affecting statistical validity of the procedure. An example of such procedure is provided in Supplementary Appendix.

We acknowledge the contributions of the TCGA Research Network. This work was supported by grants from China Scholarship Council, the National Natural Science Foundation of China (81573253), project funded by the Priority Academic Program Development of Jiangsu Higher Education Institutions at Soochow University to ZXT, the National Natural Science Foundation of China (81672743), the fund (2016YFC0904600) from the Chinese Ministry of Science and Technology, NIH R01CA133093, the Alabama Innovation Fund to BX, and was also supported by the research grant: NIH 2 R01GM069430 to NJY.