Human facial morphology varies considerably among individuals and can be influenced by gene polymorphisms. We explored the effects of single nucleotide polymorphisms (SNPs) on facial features in the Uygur youth population of the Kashi area in Xinjiang, China. Saliva samples were collected from 578 volunteers, and 10 SNPs previously associated with variations in facial physiognomy were genotyped. In parallel, 3D images of the subjects’ faces were obtained using grating facial scanning technology. After delimitation of 15 salient landmarks, the correlation between SNPs and the distances between facial landmark pairs was assessed. Analysis of variance revealed that ENPP1 rs7754561 polymorphism was significantly associated with RAla-RLipCn and RLipCn-Sbn linear distances (p = 0.044 and p = 0.012, respectively) as well as RLipCn-Stm curve distance (p = 0.042). The GHR rs6180 polymorphism correlated with RLipCn-Stm linear distance (p = 0.04), while the GHR rs6184 polymorphism correlated with RLipCn-ULipP curve distance (p = 0.047). The FGFR1 rs4647905 polymorphism was associated with LLipCn-Nsn linear distance (p = 0.042). These results reveal that ENPP1 and FGFR1 influence lower anterior face height, the distance from the upper lip to the nasal floor, and lip shape. FGFR1 also influences the lower anterior face height, while GHR is associated with the length and width of the lip.

Facial features and expressions are key elements of non-verbal communication and mutual identification, and show significant particularities and differences between individuals. Facial morphological characteristics are related to the expression of several genes [1–5], and closely linked to the activity of several signaling pathways, including BMP, SHH, FGF, ENPP1 and Wnt/β-catenin [6–9]. Notwithstanding, our current understanding of the development of facial morphology comes mainly from anatomical research, and the possible influence of single base DNA mutations (single-nucleotide polymorphisms, SNPs) remains scantily explored. In recent years, however, the possible association between gene polymorphisms and facial morphology, related in particular to differences in facial features among ethnic groups, has become an attractive research topic.

A few studies have addressed the genetic regulation of facial morphogenesis and put forward a series of candidate genes. IRF6 (interferon regulatory factor 6) is a key factor in the growth and development of keratinocytes. Peng et al. [10] found that there was a significant correlation between the expression of IRF6 and the morphology of the mouth in Chinese Han women. ENPP1 (ectonucleotide pyrophosphatase/phosphodiesterase 1) encodes an enzyme that negatively regulates bone mineralization. When mutated at 5′UTR and 3′UTR, it leads to a change in the height of the upper face [11]. The GHR (growth hormone receptor) gene affects the normal growth and development of the human body. Two GHR genetic variants, Pro561Thr (rs6184) and I526L (rs6180), have been shown to alter mandible height in an East Asian population [11]. FGFR1 (fibroblast growth factor receptor 1) affects normal facial morphology development in humans, and is associated with the cephalic index in multiple populations [11].

The Kashi area is located in the southwest of the Xinjiang Uygur Autonomous Region in northwest China, where the Uygur people are the largest ethnic minority group. The Uygur population presents a Mongolian and Caucasian mixed ancestry, and their facial features, especially the orbital contours resembling Caucasian and European ethnic populations, contribute to the characteristic Uygur facial physiognomy. Guo et al. [12] analyzed high-resolution 3D images of soft-tissue facial forms in four Eurasian populations, including Han Chinese, Tibetans, Uygur and Europeans. Their results showed that among-population differentiation was higher for soft-tissue facial forms than for genome-wide genetic loci. High-resolution data analysis showed that Europeans and Han people had significant differences in the nose, eyebrows region, and cheeks. Thus, we used a high-resolution 3D image acquisition system to study the effect of SNPs on facial morphology in a sample of the Uygur population.

The distance between pairs of facial landmarks on 3D images was measured and contrasted with matched SNP genotyping data from study subjects.

Table 1: Association between rs7754561 in the ENPP1 gene and facial landmark pairs distances

Table 2: Association between rs4647905 in the FGFR1 gene and facial landmark pairs distances

Table 3: Association between rs6180 and rs6184 in the GHR gene and facial landmark pairs distances

Facial morphology is one of the most easily recognizable features of human beings. While the main genetic pathways defining craniofacial morphogenesis have been elucidated, the extent to which small genetic variations influence facial physiognomy is largely unknown. This study collected SNP genotyping data and 3D facial images from 578 Uygur volunteers (220 males and 358 females, 18 to 25 years old) from the Kashi area of Xinjiang, China, to analyze the relationship between gene polymorphisms and facial morphology. Our results showed that rs7754561 in the ENPP1 gene, rs4647905 in the FGFR1 gene, and rs6180 and rs6184 in the GHR gene are associated with morphometric facial features.

Ectonucleotide pyrophosphatase/phosphodiesterase 1 (ENPP1), a membrane-bound ectoenzyme, is one of the key enzymes controlling bone mineralization through its modulation of Pi/PPi levels. The activity of this enzyme leads to production of PPi by catalyzing the hydrolysis of the phosphodiester I bond of nucleoside triphosphates [13]. ENPP1 expression correlates with osteoblast differentiation, and osteoblast cultures overexpressing ENPP1 contain elevated amounts of PPi and show reduced mineral formation [14]. Ermakov et al. [11] investigated the association of polymorphisms in the ENPP1 locus with normal variability of craniofacial phenotypes in 1,042 Western Eurasian individuals, and found that ENPP1 gene polymorphisms were associated with upper facial height. Additionally, associations were detected between head breadth and lower face height, and markers residing in or close to the promoter and 3′UTR of the ENPP1 gene.

In our research, there was a significant difference in the linear distance between RAla-RLipCn for the ENPP1 rs7754561 polymorphism. When the AA, instead of the GA, genotype was present, the linear distance between the nose and the mouth became shorter. As the distance between the sides of the middle nose to the lips is shortened, the distance from the nose to the lips is also shortened, thus locally influencing lower anterior face height. We found also a significant association between rs7754561 and the linear distance of RLipCn-Sbn. Individuals with GG or AA, rather than GA genotypes, showed a shorter linear distance from the nasal floor to the right mouth corner; in the lower anterior face, the distance from the nasal floor to the upper lip is shortened, making the philtrum shorter, increasing the upper lip height, and shortening the width of the lips. The ENPP1 rs7754561 polymorphism was also correlated with the curve distance of RLipCn-Stm when the genotype was GA, making the distance from the right lip corner to the stomion longer. Consequently, the width between the two lips’ corners, and the width of the stomion, becomes longer. Thus, the ENPP1 rs7754561 polymorphism was associated with variations in the lower anterior face landmarks such as the distance of the subnasale point to the chin, the distance from the subnasale to the lips, and the width of the lips. Based on these observations, we hypothesize that the putative functional genetic variant in this region, most likely in the 3′UTR, affects the stability of ENPP1 mRNA, which in turn influences the local Pi/PPi levels and bone mineralization. This likely cause generalized effects on skeletal development, affecting facial morphological features.

Fibroblast growth factors play important roles in the differential growth of the skull, brain, and facial prominences. Gómezvaldés et al. [15] evaluated the relationships between FGFR1 polymorphisms and cephalometric measurements and indices in one Mexican Native and two mestizo Mexican populations, and found a tendency for a decrease in cephalic index in individuals homozygous for the allele rs4647905C; when General Linear Model analyses were performed, a statistically significant association was found between four SNPs in FGFR1 and head length in the mestizo population. In our research, we found that there was a significant association between the FGFR1 rs4647905 polymorphism and the linear distance of LLipCn-Nsn, affecting the middle anterior face height, and the distance of the upper lip to the subnasale. We surmised that when mutated, this allele shortens the distance from the right lip corner to the nasion. Thus, the middle anterior face height will be reduced, affecting the height of the nasal dorsum and the distance between the upper lip and the nasal floor.

Bayram et al. [16] evaluated allelic and genotype frequencies of the P561T and C422F polymorphic sites of the GHR gene and their association with mandibular prognathism, and found that effective mandibular length (condylion-gnathion) and lower face height (anterior nasal spina-menton) were associated with the P561T variant. Zhou et al. [17], on the other hand, used quantitative trait locus mapping methods to evaluate the relationship between craniofacial morphology and SNPs in GHR in an unselected, healthy Chinese population. Their results showed that individuals with the genotype CC of polymorphism I526L had a significantly greater mandibular ramus length (condylion-gonion/articulare-gonion) than those with genotypes AC or AA. Our results indicated that rs6180 in the GHR gene influences the width of the oral fissure. GHR rs6184, in contrast, was associated with the height and width of the upper lip, and also influenced the protrusion of the lip.

Sample collection in this study was carried out with the approval of the ethics committee of the First Affiliated Hospital of Xinjiang Medical University and in accordance with the standards of the Declaration of Helsinki. Written informed consent was obtained from every participant.

807 volunteers aged 18–25 years old from the Uygur population in the Xinjiang Kashi area participated in the study. We removed 177 individuals based on the exclusion criteria. 37 individuals were further excluded due to poor DNA sample quality. In addition, 15 subjects with a typing call rate <95% were excluded. Thus, 578 individuals (358 females, 220 males) were available for 3D imaging and successful genotyping of the 10 candidate SNPs. 3 ml of saliva was collected from each participant for DNA extraction.

Facial 3D data was acquired using Geomagic’s non-contact facial three-dimensional raster scanner (3D Systems, SC, USA). The subjects were in a sitting position and the scanning distance was 1.2 m. Both men and women were instructed to have their foreheads exposed, a relaxed and neutral facial expression, and to look at the top of the scanner’s three-point objective lens. Face scanning precision was set to 0.02 mm, capturing 50,000 points per second. Upon completion of the scan, the subject’s face CAD model was exported in STL format. 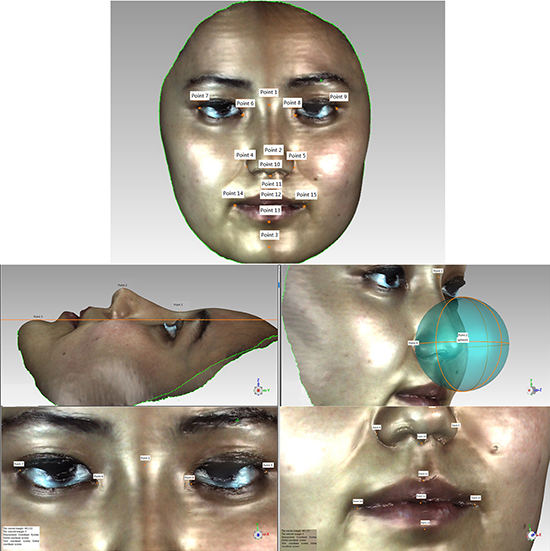 Hardy-Weinberg equilibrium tests were performed using the exact test to assess the genetic variability of the population. p = 0.05 was set as the significance level threshold for the candidate gene strategy; p > 0.05 indicated that the population surveyed reached genetic balance.

All the data were analyzed by SPSS19.0 statistical software. Measurement data is represented by

± SD. Comparison between groups was performed using analysis of variance, and two-pair comparisons were carried out using the LSD t test method. A p-value < 0.05 was considered statistically significant.

This work was supported by Autonomous Region Science and Technology Projects (No. 201591191). We are grateful to all the individuals in the study who made this work possible.