Methods: A total of 1106 participants (including 583 males and 523 females) including 550 CAD patients and 556 control subjects were recruited in this study, and the mean age for these participants was 55.5 ± 11.8 years old. Logistic regression was used to observe association of SNP within PPARG and CYP1A1 with CAD risk and GMDR model was used to screen the best interaction combinations.

Coronary artery disease (CAD), which was an important chronic disease cause of death worldwide [1], has accounts to almost 40% of all mortalities in many countries [2, 3]. CAD is influenced by multifactorial factors and may result from the complex synergistic reaction between genetic background and environmental factors [4]. Previously several CAD related variants and environmental factors were reported, such as type 2 diabetes mellitus (T2DM), dyslipidemia, hypertension and genetic factors, including proliferator-activator receptor-G (PPAR-G) and Cytochrome P450 (CYP) family, are significant risk factors for CAD [5–7].

The PPARG gene, located at 3p25-24, and plays a non-ignorable role in adipocytes differentiation, insulin sensitivity regulation, and its variation has been reported association with some CAD related risk factors, such as T2DM or metabolic syndrome (MS) [8]. Additionally, PPARG also play important role in regulation for fatty acid metabolism, perhaps in adipose tissue storage and free fatty acids reduction. Many studies have been conducted to investigate the association of PPARG polymorphism with CAD susceptibility, but the results obtained from these studies were controversial [9–11]. CYP is a kind of enzymes, which could mediate the oxidative metabolism of exogenous and endogenous molecules [12], and metabolism for several endogenous molecules, such as cholesterol, estrogens, androgens, and so on [13, 14]. Recently, several studies have reported the association between CYP1A1 polymorphisms and the risk of CAD susceptibility [15–17]. As fore- mentioned that CAD risk was influenced by many gene polymorphisms or interactions among several genes, considering CYP1A1 and PPARG both are risk factor of CAD, however, to date, less study focused on PPAR G- CYP1A1 interaction on CAD risk was reported, so the aim of this study was to investigate the impact of PPARG and CYP1A1 polymorphisms, and synergistic interaction between the two genes on CAD risk.

In this study, 1106 participants (583 men, 523 women) including 550 CAD cases and 556 control subjects were recruited, and the mean of age for these participants is 55.5 ± 11.8 years old. Table 1 shows the clinical characteristics for the participants in cases and controls. The means of BMI and WC are higher in CAD case group than that in control group. There are no significant different between cases and controls in distribution of males, rate of high- fat and low fiber diet, alcohol drinking and smoking and mean of age.

Table 2: Analysis on the association between 4 SNPs and CAD risk

Abbreviations: P: Pro, A: Ala

Table 5: Haplotype analysis on association of PPARG and CYP1A1 gene and CAD risk

In current study based on Chinese Han population, we found that variants in rs10865710, rs1805192 and rs4646903 were associated with higher CAD risk. The PPARG gene plays an important role in adipocytes differentiation, insulin sensitivity regulation, and its variation has been reported association with some CAD related risk factors, such as T2DM or metabolic syndrome (MS) [8]. Additionally, PPARG also play important role in regulation for fatty acid metabolism, perhaps in adipose tissue storage and circulating concentrations of free fatty acids reduction. Many studies have been conducted to investigate the association between PPARG polymorphism and CAD risk, but the results obtained from these studies were controversial [9–11]. Rhee et al. [9] suggested that rs1805192 polymorphism in exon B of PPARG was not associated with prevalence of CAD in Korean adults, the similar results were also found in Caucasians [18] and in Indian Population [19]. In a Chinese study, Zhou et al. [10] also reported no association was obtained between and HDL cholesterol in CAD patients. In gender difference analysis, the rate for the T allele is significantly lower in males, subjects with age less than 62 years, and non-smokers. But Liu et al. [20] suggested that both rs1805192 and rs10865710 polymorphisms were associated with CVD related risk factors, but was not associated with lipid and nutrition metabolism. Wu et al. [21] performed a meta- analysis and indicated that the Ala allele in rs1805192 might related to increased CAD risk, but this effect is stronger in Caucasians and barely in Asians.

CYP is a kind of enzymes, which could mediate the oxidative metabolism of exogenous and endogenous molecules [12], could also play an important role in metabolism for several endogenous molecules, such as cholesterol, estrogens, androgens, and so on [13, 14]. Recently, several studies have reported the association between CYP1A1 polymorphisms and the risk of CAD susceptibility [15–17]. Manfredi et al. [22] found that CYP1A1 polymorphisms did not influence CAD susceptibility. Taspinar et al. [23] also suggested that CYP1A1 genotypes were not significantly different between patients and controls. A meta- analysis [24] suggested that the CYP1A1 rs4646903 polymorphism was not correlated with CAD risk. Yeh et al. [25] suggested that CYP1A1 polymorphism may be associated with the lower susceptibility to CAD, particularly in non-smokers. However, some studies concluded different results. Sultana et al. [26] suggested that ischemic stroke (IS) risk was higher in subjects with CYP1A1- CC genotype. Wang et al. [15] reported that CYP1A1 MspI polymorphisms are associated with increased CAD risk. Zou et al. [17] conducted a case- control study for Chinese Uygur and Han and they indicated that both rs12441817 and rs4886605 within CYP1A1 gene are correlated with CAD susceptibility.

CAD susceptibility is influenced by many gene polymorphisms and gene- gene interactions, considering CYP1A1 and PPARG both are risk factor of CAD, however, till now, no study focused on PPARG- CYP1A1 interaction on CAD risk was reported. In this study, we found that interaction between rs1805192 and rs4646903 was also correlated with CAD risk, and the CAD risk was highest in participants with rs1805192- Pro/ Ala or Ala/ Ala and rs4646903- TC+CC genotype, and was lowest in participants with rs1805192- Pro/ Pro and rs4646903- TT genotype. The potential mechanism for this interaction was not very clearly, some studies have reported that both PPARG and CYP1A1 gene polymorphisms were associated with CAD related- risk factors, such as T2DM, obesity and hypertension, and so on. Maybe this combined or crossover effect could lead to the interaction between PPARG and CYP1A1 gene on CAD risk.

There are several limitations in our study. Firstly, more SNPs within PPARG or CYP1A1 gene should been studied in the future study, particularly some less studied SNPs. Secondly, some environmental risk factors should be included to investigate gene- environment interaction, such as smoking or alcohol drinking and so on.

All participants were recruited from 6 June 2012 to 15 November 2014 from Beijing Anzhen Hospital. The CAD patients were diagnosed by coronary angiography using a quantitative coronary angiographic system [27]. The control subjects were randomly recruited from another population investigation program for chronic disease and related risk factors in our city and with nearly 1:1 matched to cases group on the basis of age (± 3 years) and gender. Participants with hypertension, type 2 diabetes (T2DM), and others CAD related risks were excluded from the control group (Figure 1). Writing informed consents were signed by all participants. 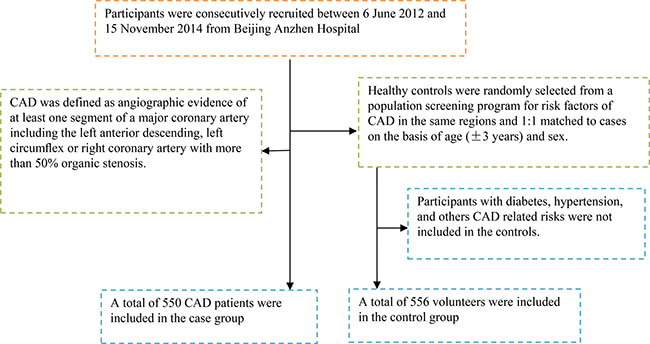 We collected related information by using questionnaire and body measurement. In the questionnaire investigation, some information, such as demographic information, alcohol drinking, tobacco smoke and diet habit information for all cases and controls were collected. In the body measurement procedure, some parameters, such as waist circumference (WC), body weight and height were measured, and then BMI was calculated. Currently alcohol drinkers were defined as those who drink more than 1 times every month; those who have smoked for at least 100 cigarettes and still smoked at the time of the investigation were considered as current smokers. Blood samples of all participants were all collected during the investigation.

We selected SNPs within the PPARG and CYP1A1 gene according to the following methods, including: 1) which have been reported associations with CAD or risk factors of CAD; 2) minor allele frequency (MAF) greater than 5%. Taking into account the limitations of human, material and financial resources, a total of two SNPs in PPARG and two SNPs in CYP1A1 were selected for genotyping in the study: rs1805192, rs4646903, rs10865710 and rs1048943. Genomic DNA of all participants was extracted from the collected EDTA-treated whole blood by using the DNA Blood Mini Kit (Qiagen, Hilden, Germany) according to the instruction manual. The genotyping for all SNPs were performed by using Taqman fluorescence probe. Table 6 shows the corresponding probe sequences and description for all SNPs. ABI Prism7000 software was used for genotyping. A 25 μl reaction mixture including 1.25 ul SNP Genotyping Assays (20×), 12.5 μl Genotyping Master Mix (2×), 20 ng DNA, and the conditions were as follows: initial denaturation for 9 min and 94°C, denaturation for 18 s and 93°C, annealing and extension for 80 s and 62°C, 50 cycles.

The means and standard deviations (SDs) were calculated for normally distributed continuous variables and were compared between cases and controls using Student’s t test, and percentages are also calculated for categorical variables and are compared between case group and control group by using χ2 test. The association between SNPs and CAD and Hardy-Weinberg equilibrium (HWE) were performed by using SNPStats. Logistic regression was used to observe association of SNP within PPARG and CYP1A1 with CAD risk. Generalized multifactor dimensionality reduction (GMDR) model was used to analyze the gene- gene interaction, some parameters including cross-validation consistency, the testing balanced accuracy and the sign test were calculated, a sign test or a permutation test (providing empirical p-values) for prediction accuracy can be used to measure the significance of an identified model.

The writing of this paper was supported by Beijing Anzhen Hospital and Baotou Fourth Hospital. We thank all the staffs who help us in this investigation. Zhang Xiaojiang and Shi Conghong contributed equally to this work.