*These authors contributed equally to this study

Purpose: To conduct a comprehensive evaluation of the association of the human8-oxoguanine glycosylase 1 (hOGG1) gene polymorphism rs1052133 with gastric cancer (GC) through a systematic review and meta-analysis of genetic association study.

Materials and Methods: All case-control association studies on hOGG1 and GC reported up to December 15, 2016 in PubMed, Embase, Web of Science, and the Chinese Biomedical Database were retrieved. Odds ratios (ORs) and 95% confidence intervals (95% CIs) were calculated for single-nucleotide polymorphism (SNP) using fixed- and random- effects models according to between-study heterogeneity. Publication bias analyses were conducted using Begg test.

Conclusions: This meta-analysis showed there was no association between hOGG1 rs1052133 and GC. Given the limited sample size, further investigations including more ethnic groups are required to validate the association.

Gastric cancer (GC) is one of the most common cancers and the leading causes of cancer death in the world [1], however, there is a gradually decrease in incidence and mortality rates in most developed countries [2]. GC is a multifactorial disease caused by dietary, genetic and environmental factors [3, 4]. Although the pathogenetic mechanism of GC is very complicated and is still not fully understood, more and more evidence has been shown that there is a correlation between genetic polymorphisms and GC risk [5–7].

To date, many genetic polymorphisms in the carcinogen detoxification, antioxidant protection, DNA repair and cell proliferation processes have been reported to play a crucial role in the development of GC [8]. The human 8-oxoguanine glycosylase 1 (hOGG1) gene, specifically involved in the repair of DNA oxidative damage in the base excision response pathway, has been shown to be associated with a variety of cancers [9–13]. As an important component of DNA repair pathway, hOGG1 encodes a DNA glycosylase enzyme that actively removes 8-hydroy-2-deoxyguanine, which is highly mutagenic and a major form of oxidative DNA damage [14, 15]. The dysfunction of hOGG1 might result in the DNA repair deficiency and then induce gene mutation and cell canceration. Functional studies showed that the hOGG1 variant had normal enzymatic activity, but maintained greater sensitivity to oxidation than wildtype hOGG1 protein [16].

The hOGG1 gene has been regarded as a candidate for involvement in the underlying cause of GC and the hOGG1 polymorphism rs1052133 has been widely evaluated in association with GC across different ethnicities [11, 17–31]. hOGG1 polymorphism rs1052133 has been reported to be associated with an altered risk for GC in Chinese, Japanese and Caucasian populations [11, 18, 19, 32]. However, other reported studies on the association between hOGG1 rs1052133 and GC risk are inconclusive and conflicting [20–31]. Such inconsistence and heterogeneity could be caused by different sample sizes and diversities in multiple ethnic cohorts. Meta-analysis, which combined all studies with the same criteria, could be helpful to comprehensively explain the association of hOGG1 rs1052133 with GC and provide some new clues for the research on GC. Therefore, in this study we conduct a systematic review and meta-analysis of all association studies on hOGG1 rs1052133 with GC, to summarize and evaluate the association between hOGG1 rs1052133 and GC.

A flow diagram (Figure 1) shows the selection process of studies included in our analysis. The initial search strategy yielded 31 articles. Among them, two review articles were excluded because of the publication type and six articles were excluded because of unrelated topics. The full text of the remaining 23 studies was retrieved and reviewed. Eight articles were excluded after full-text review, five studies were not case-control studies and three articles were experimental studies. Finally, 15 articles were identified that met the inclusion criteria and included for the meta-analysis. The analyzed SNP was successfully genotyped and was within HWE (except the genotype in control subjects from the Takezaki’s study) across all the included studies. All of the articles were case-control studies and all the cases were histopathologically confirmed as GC. The characteristics of these included articles are listed in Table 1 and Table 2. The NOS results showed that the score ranged from 7 to 8 with an average of 7.50, which indicated that the methodological quality of these selected articles was generally reliable. 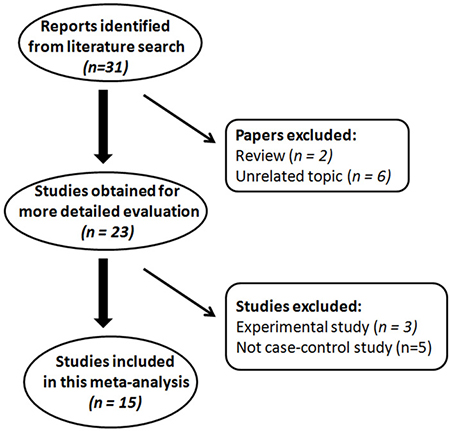 Table 1: Characteristics of the fifteen studies included in this meta-analysis

Table 2: Genotype frequencies of hOGG1 rs1052133 among gastric cancer cases and controls in the included studies 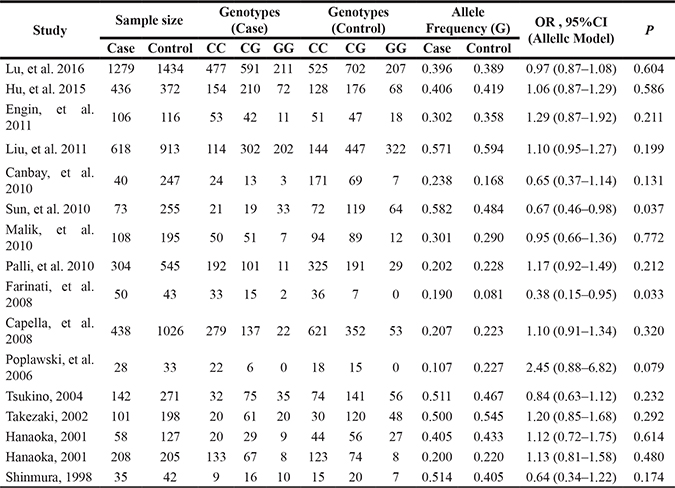 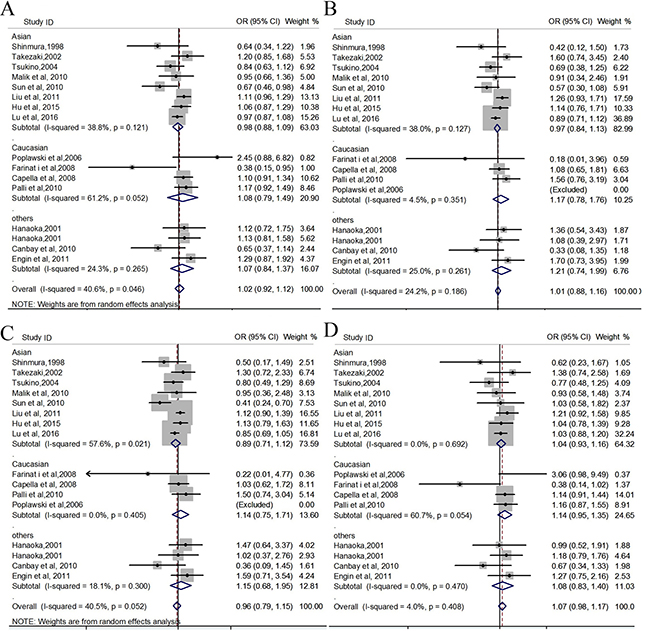 Publication biases were assessed by the Egger’s test quantitatively and the result for hOGG1 rs1052133 based on the 15 included studies did not observe any obvious evidence of publication bias in the overall analyses under all genetic models (Table 3 and Figure 3). The effect of each study on the pooled OR was also assessed by sequential omission of individual studies. We did not find that the exclusion of any single study alter the significance of the final pooled OR. 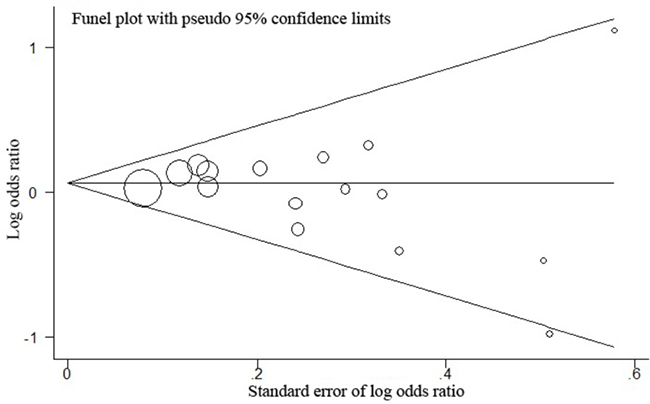 GC is considered to be a common, complex and multifactorial disease, and is estimated to have a significant heritable component. GC ranks as the third leading cause of cancer mortality worldwide and confers a 5-year survival of 20% [33]. Identifying causative genes has helped to understand the disease process and may aid in prevention. About 1%–3% of GC could be attributed to inherited cancer predisposition syndromes. More advances have been made in human GC genetics, but there is still to be known [8]. To date, Germline E-cadherin/CDH1 mutations have been identified in families with an autosomal dominant inherited predisposition to diffuse GC [34]. hOGG1 has been reported to be related to GC risk in several studies [11, 18, 19, 32]. It is an important glycosylase enzyme that plays a critical role in the repair of DNA oxidative damage [14, 15]. The dysfunction of hOGG1 might lead to deficiency of DNA repair and result in cell canceration. hOGG1 variant has been shown to exhibit lower DNA repair activity and greater sensitivity to oxidation than wildtype hOGG1 protein [16].

This systematic review and meta-analysis has sufficient power to evaluate and review all the published genetics studies in hOGG1 rs1052133, however, some potential limitations of our study on the understanding of hOGG1 in GC genetics should be considered. (1) This meta-analysis was mainly based on the studies with 2950 GC patients and 3817 controls in Japanese and Chinese populations [11, 18, 20, 26, 27, 29–31]. Besides, only 1074 GC patients and 2205 controls in Turkish, Indian, Italian, Spanish and Polish populations were included in the present study. It may restrict our conclusions which indicate the need for larger sample sizes in other ethnic populations. (2) There was a high heterogeneity detected in the Caucasian population under allelic genetic model, in the Asian population under addictive model and in the Caucasian population under dominant model. It is possible that different populations with different clinical patient characteristics were included. (3) GC is a multifactorial disease that results from complex interactions between various genetic factors and other factors. Therefore, our results may be influenced by confronting factors, such as age, gender, environment, and lifestyle. If the investigation of gene-environment interactions in different ethnic subgroups could be carried out, we might get more conclusive claims about the association of hOGG1 rs1052133 with GC.

In conclusion, this meta-analysis showed that hOGG1 rs1052133 is not associated with GC under all the genetic models, suggesting that it may not affect individual susceptibility to GC. Further investigations with larger sample sizes and more ethnic groups are required to validate the association and confirm the roles of hOGG1 in GC.

A systematic literature search using the databases PubMed, Embase, Web of Science, and the Chinese Biomedical Database was conducted, to identify all published studies on the association of hOGG1 polymorphisms with GC from their starting date to December 15, 2016. Following keywords were used: ‘‘cancer,’’ ‘‘gastric cancer,’’ ‘‘human 8-oxoguanine glycosylase,’’ ‘‘hOGG1,’’ ‘‘rs1052133,’’ ‘‘polymorphism(s),’’ ‘‘variant(s),’’ and ‘‘mutation(s).’’ The internet was searched using the Google search engine. Reference lists of the retrieved articles and reviews were manually checked for additional articles, to identify studies not yet included in the electronic searches.

The eligible articles were considered if they (1) evaluated associations between hOGG1 rs1052133 and GC; (2) used a case–control design to compare GC cases and normal controls in defined populations; (3) gave an OR with 95% CI or other available data from which they could be estimated; and (4) were original research articles, not reviews or comments. Excluded were abstracts from conferences, full texts without raw data available for retrieval, republished data, duplicate studies and reviews.

Two observers (DDZ and XNG) independently abstracted data from all eligible publications onto paper data collection forms. Two reviewers (JLH and GQZ) were blinded to the details (title, author, and academic address) of these studies during assessment. Disagreements were resolved by discussion until a consensus was achieved. Otherwise, a third investigator was consulted to resolve the dispute. The following items were collected from each study: first author’s surname, year of publication, statistical data, ethnicity of subjects, whether Hardy-Weinberg equilibrium (HWE) was examined in controls, genotyping method, total numbers of cases and controls, as well as total numbers of cases and controls for each hOGG1genotypes, respectively.

The Newcastle-Ottawa Scale (NOS) was used to assess the quality of the included studies by two investigators independently. Through the rating system, the NOS was conducted to judge the study quality based on three aspects, which were selection, comparability, and exposure situation in case-control studies. Rating scores range from 0 (worst) to 9 (best). Studies with a score of 7 or greater were thought to have an adequate or good quality.

A pooled OR with its corresponding 95% CI was used as a measure of the association of hOGG1 rs1052133 with GC. For genotypic comparison, allelic, addictive, dominant and recessive models were applied in the investigation of the disease association. We conducted stratified analyses by ethnicity, including Asian populations (Japanese, Chinese and Indian), Caucasian populations (Polish, Italian and Spanish), other populations (Turkish, Japanese Brazilian and non-Japanese Brazilian) and pooled populations. Sensitivity analysis was carried out by excluding one study at a time to explore whether the results were influenced by a specific study. Heterogeneity (between-study inconsistency) was investigated and measured using I2statistic. A p value of I2 < 50% indicated an absence of heterogeneity among studies, the fixed-effect model (Mantel-Haenszel method) was thus used to calculate the pooled ORs. In contrast, if the p value for heterogeneity was I2 ≥ 50%, indicating a high degree of heterogeneity between studies, then the random-effect model (DerSimonian-Laird method) was used to evaluate the summary ORs. Begg liner regression test was used to assess the potential publication bias, where a value of p < 0.05 was considered statistically significant. The Hardy-Weinberg equilibrium (HWE) for each SNP was tested by the χ2 test. All statistical analyses were performed by the Review Manager software (RevMan, version 5.2; The Nordic Cochrane Centre, The Cochrane Collaboration, Copenhagen;2012), and the STATA software (version 12.0, STATA Corp., College Station, TX, USA), as well as the Hardy Weinberg package (version 1.3) in R language (version 2.15.0, http://cran.r-project.org/). Two-sided P values < 0.05 were considered statistically significant.

The authors report no conflicts of interest. The authors alone are responsible for the content and writing of the paper.