Results: 2309 cases were included. 90.86% were infected with HPV, and the remaining 9.13% were negative. The most common subtypes were HPV16, HPV18, HPV58, HPV53, and HPV33. HPV16 and HPV18 appeared to be the most prevalent HPV subtypes across all age groups, while the prevalence of the other subtypes varied between age groups. A logistic regression analysis revealed that the occurrence of cervical squamous cell carcinoma and adenocarcinoma was most closely correlated to a persistent infection with HPV16 or HPV18, with P < 0.05.

Materials and Methods: The prevalence of 27 HPV subtypes in 2309 cervical cancer patients who received treatment at our hospital between June 2011 and January 2016 was analyzed based on the results of HPV testing using Liquid suspension chip technology (Luminex 200).

Conclusions: HPV16 and HPV18 were the most prevalent HPV subtypes among the cervical cancer patients, followed by HPV58, HPV53, and HPV33. 9.13% of the cases appeared to not be associated with HPV. This suggests that HPV testing without the use of cytology may overlook some special types of cervical cancer that account for approximately 10% of all cervical cancer cases.

Studies have found that the type-specific prevalence of HPV varies obviously by age and region. For example, in the southern part of China, HPV infections primarily occur among women under 30 years old. The HPV prevalence was estimated to be 26%, with 21.12% infected with high-risk HPV, and HPV52, HPV16, and HPV58 were the most prevalent subtypes [3]. In Yunnan Province, HPV and high-risk types were estimated to infect 38.1% and 32.4% of the local people, respectively. HPV16 was the most prevalent among all the HPV subtypes, followed by HPV52 and HPV58 [11].

An analysis of the HPV subtypes of different ethnic groups in a country or a region is highly significant to prognosis evaluation, creating reexamination plans and clinical treatment plans, and developing preventive and therapeutic HPV vaccines. However, the HPV vaccine has not been widely administered in China. The HPV vaccine was not marketed in China until after 2016, and as a result, it has not been widely used. While HVP infections in healthy women and patients with cervical precancerous lesions have been reported in different provinces of China, there have been relatively few research reports on HPV infections among cervical cancer patients in China. Therefore, our research group analyzed HPV infections among cervical cancer patients that received treatment between June 2011 and January 2016 at the largest gynecological cancer prevention and treatment center in West China. Our aim was to provide a basis for cervical cancer prevention and treatment.

Table 2: Prevalence and distribution of HPV in 2309 cervical cancer women 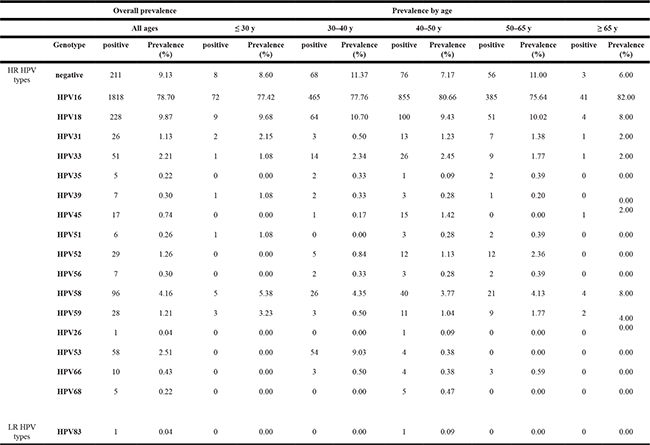 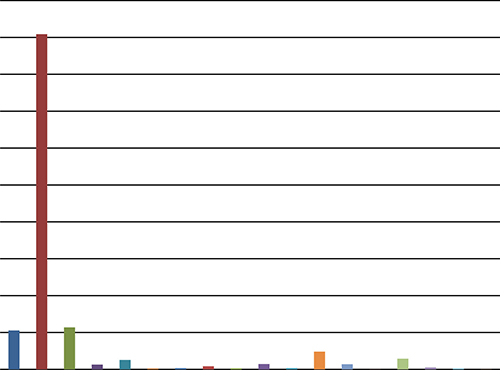 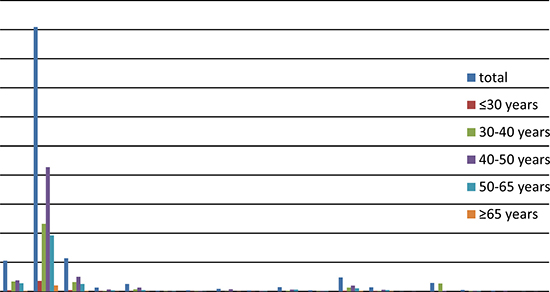 Figure 3: Distribution of HPV in cervical cancer by age.

The logistic regression analysis reveals that squamous cell carcinoma, adenocarcinoma, and adenosquamous carcinoma of the cervix were most closely correlated to persistent infection with HPV16 or HPV18, with P < 0.001. Adenosquamous carcinoma of the cervix may also be correlated with persistent HPV45 infection, with P = 0.007. Figure 4 and Table 3 show the detailed results of the analysis.

Table 3: Results of logistic analysis (P < 0.05 indicates that the type of pathology may be association with and the subtypes HPV persistent infection)

In contrast, we obtained different results. This study analyzed HPV infections among 2309 cervical cancer patients.90.87% of the cases in this study were currently infected with HPV, with 90.82% infected with high-risk HPV types. The most common subtypes among these cases were HPV16, HPV18, HPV58, HPV53, and HPV33.

High-risk HPVs are known to be the primary cause of cervical cancer. HPV prevalence varies with the grades of cervical cancer and cervical precancerous lesions as well as differs between regions and ages. Xiao Meizhu et al. [15] analyzed HPV infections among 2817 cases of cervical intraepithelial neoplasia (CIN) in Beijing. They found that high-risk HPV had infected 477 (78.2%) of the 610 CIN1 cases, with HPV16, HPV58, HPV52, and HPV18 being the most prevalent subtypes. Furthermore, 2060 (93.3%) of the 2207 CIN2 cases were infected with high-risk HPV, and HPV16, HPV58, HPV33, and HPV52 were the most frequently observed. Krishnan Baskaran et al. [14] estimated that the prevalence of high-risk HPV is as high as 94% among cervical cancer cases, which is significantly higher than that among the general population and women with cervical precancerous lesions. HPV16, HPV18, HPV45, HPV58, and HPV31 have been demonstrated to be the most prevalent HPV subtypes among cervical cancer cases.

A few studies have suggested that persistent infections with different HPV subtypes may be responsible for different histological types of cervical cancer, and the corresponding prognosis tends to vary. In this study, a logistic regression analysis was conducted to determine whether there is a link between the occurrence of different histological cervical cancer types and specific HPV subtypes. The results show that squamous cell carcinoma, adenocarcinoma, and adenosquamous carcinoma of the cervix areclosely correlated with a persistent infection with HPV16 or HPV18, with P < 0.001. Adenosquamous carcinoma of the cervix may also be correlated with a persistent HPV45 infection, with P = 0.007. The results suggest that some special histological types of cervical cancer may be associated with infection by certain HPV subtypes. However, due to the small sample size, further research based on a large sample is needed in order to validate these findings. These findings may provide a new approach for the prevention, screening, and treatment of cervical cancer.

HPV has been proven to be the primary cause of cervical lesions, however, it is not the only cause. The occurrence and development of cervical lesions result from the combined effect of multiple factors. Furthermore, 9.13% of the cervical cancer cases included in this study tested negative for HPV,with squamous cell carcinomas, adenocarcinomas, and adenosquamous carcinomas accounting for the majority of these cases. Research has shown that an estimated 80% of women get infected with HPV at some point in their lifetime; however, most of these cases are transient infection. Most HPV infections only last for 8 to 24 months before the immune system clears them. Nonetheless, in very few cases, the infections tend to persist and progress into lesions [16]. These cases will test negative for HPV because the viruses will ultimately be killed by the body’s immune system. However, despite the negative test results, the cervical lesions will last for a long period of time.

The study has limitations. Although the sample size is large, the study was only a single-center retrospective study. Some special types of cervical cancer are relatively small, which can affect the accuracy of the results of the logistic regression analysis.A logistic regression analysis was used to determine whether there is a link between the occurrence of different histological cervical cancer types and specific HPV subtypes, and it was found that there is an association between cervical cancer and persistent infection with HPV16 or HPV18. Nonetheless, it is very difficult to define the case with persistent infection. A large-scale multicenter prospective study is to be needed to confirm the results.

The results of this study show that HPV16 and HPV18 were the most prevalent HPV subtypes in cervical cancer patients across all age groups in West China, followed by HPV58, HPV53, and HPV33. The prevalence of the HPV subtypes, excluding HPV16 and HPV18, varied significantly between the age groups. Additionally, 9.13% of the cases included in this study were not associated with HPV. Most of these cases were diagnosed with special types of cervical cancer. This suggests that HPV testing without the use of cytology may overlook some special types of cervical cancer that account for approximately 10% of all cervical cancer cases. Therefore, clinical attention should be paid to this finding.

This is a retrospective study. The West China Second University Hospital of Sichuan University is known as the largest gynecological cancer prevention and treatment center in West China. This study focused on women with pathologically confirmed invasive cervical cancer who received treatment between June 2011 and January 2016 at this hospital. Two pathologists reexamined pathological sections of paraffin-embedded tissues from the cervical cancers. If the two pathologists had inconsistent views, then a third pathologist was consulted to resolve the issue. Patients with uterine sarcoma, metastatic cervical cancer, or other malignant tumors associated with the cervix were excluded from this study. Because the study is a retrospective study, there is no ethical committee approval. This is in accordance with institutional or national policies concerning research approvals.

Five 10 μm thick sections were cut from each paraffin-embedded tissue specimen, and these sections were then placed into 1.5 mL centrifuge tubes. Next, 1 mL of xylene was added to each centrifuge tube and blended with the tissues by oscillation at room temperature. After centrifugation, the supernatant was removed, and 1 mL of absolute ethanol was added to the tubes to eliminate the xylene. Subsequently, a kit (Qiagen RNA/DNA Mini kit) for purifying DNA from tissue produced by Qiagen was used to extract DNA from the specimens according to the kit handbook. Afterwards, the extracted DNA was dissolved in 50 μL of elution buffer and stored at −20ºC for use.

The data from the test was analyzed using the statistics package SPSS 22.0. The measurement data, expressed as x ± s, were tested through a t-test. The enumeration data, expressed in %, were tested using the χ2 test. A logistic regression analysis was performed to examine the relationships between the different histological types of cervical cancer and the HPV subtypes. P-values were calculated and used to determine whether a certain HPV subtype had an influence on a particular histological type of cervical cancer. In this study, α = 0.05 was taken as the standard level of significance; thus, the difference between data is considered statistically significant when P < 0.05.