Background: Pregnancy at early age is the most significant modifiable factor which consistently decreases lifetime breast cancer risk. However, the underlying mechanisms haven’t been conclusively identified. Studies in mice suggest a reduction in progesterone-receptor (PR) sensitive epithelial cells as well as a downregulation of the Wnt signaling pathway as being one of the main mechanisms for the protective effect of early pregnancy. The aim of our study was to validate these findings in humans.

Methods: We collected benign breast tissue of 125 women who had been stratified according to age at first pregnancy and the occurrence of subsequent breast cancer, and performed immunohistochemistry for PR, Wnt4 and the Wnt-target Versican.

Discussion: Our results confirm prior observations in mice and suggest a role of downregulation of epithelial Wnt signaling in the protective effect of early pregnancy in humans. This results in a decreased proliferation of stem/progenitor cells; therefore, the Wnt signaling pathway may represent a potential target for breast cancer prevention in humans.

With an estimated 1.7 million cases per year worldwide, breast cancer is the most frequent cancer in women. Despite substantial progress in early detection and treatment, 521.900 women die of their disease each year [1]. Several risk factors for breast cancer have been described. One of the strongest modifiable factors which consistently decreases lifetime breast cancer risk, is pregnancy [2-4].

The protective effect of a full-term pregnancy is most pronounced for a pregnancy occurring before the age of 20, resulting in a lifetime breast cancer risk reduction of >50% in comparison to nulliparous women [2]. While the protective effect becomes negligible for women with first full-term pregnancies between the age of 30 and 34, an increased risk can be observed in women with a first pregnancy over the age of 35 [5]. Interestingly, a transient increase in breast cancer risk can be observed in women over the age of 25 years immediately after delivery, delaying the protective effect by up to 10 years [3]. In addition to early age at first pregnancy, multiple pregnancies as well as prolonged breast feeding also decrease the life-time risk for breast cancer to a smaller degree [6]. It seems that parity specifically protects against hormone receptor positive breast cancers, whereas the risk for hormone receptor negative cancers is not influenced by age at first pregnancy or parity [7]. The effect of pregnancy-induced protection against breast cancer has also been observed in rodent models [8, 9].

The underlying mechanisms of this protective effect have not been conclusively identified and may not be explainable by a solitary mechanism, but by a combination of mechanisms [6] such as alterations in circulating hormones [6, 8], a parity induced decrease of hormone responsiveness of the mammary gland [6, 8], long-lasting alterations in the composition of the mammary extracellular matrix (ECM) [6, 8, 10], as well as a terminal epithelial cell differentiation occurring during pregnancy [6, 11-13].

Meier-Abt et al. [17] analyzed the cell fate hypothesis in various mammary epithelial cell subpopulations in mice. In this study, mammary glands of parous and virgin mice were harvested, and gene-expression profiles and differentiation/proliferation potentials of specific mammary subpopulations were analyzed. In addition, the mammary glands of parous and age matched virgin control mice were immunohistochemically analyzed for the expression of estrogen receptor α-, progesterone receptor (PR), Versican, and β-catenin. The Versican gene encodes for an extracellular proteoglycan and represents one of the classic target genes of the Wnt pathway [17].

The results of their study suggested that in mice, early pregnancy leads to a reduced response of the mammary gland to progesterone, caused primarily by a decrease in the proportion of PR positive luminal cells. Consecutively, a downregulation of Wnt4 expression in the luminal epithelial cells, and a reduction of the Wnt signaling pathway in basal stem/progenitor cells was identified [17]. Wnt ligands, such as Wnt4 in breast, activate a signaling cascade of which the Wnt/β-catenin-dependent pathway is best characterized [18, 19]. Activation of the Wnt signaling pathway causes accumulation of β-Catenin in the nucleus, resulting in an interaction with transcription factors and expression of the respective target genes [18-20], which has been shown to promote tumorigenesis in mice [21] and promotes invasiveness of human breast cancer cells by interacting with the Hippo pathway [22]. On the other hand, downregulation of Wnt- signaling causes a persistent decrease of proliferation potential of basal mammary stem/progenitor cells and an increased differentiation phenotype of mammary epithelial cells [17]. These findings suggest that the Wnt signaling pathway plays a crucial role in breast cancer carcinogenesis, which might be mediated by increased proliferation of mammary stem/progenitor cells [6].

In a second study, the authors demonstrated that the reduction of PR expressing cells and downregulation of Wnt signaling pathway in parous mice are of life-long duration [23], and that pregnancies in older animals have a limited effect on these parameters [23].

In humans, only a few studies have analyzed the effect of pregnancy on breast cancer cells. A decrease of PR positive luminal cells as well as Wnt signaling can also be observed in parous compared to nulliparous women [24, 25]. However, to our knowledge, a systematic analysis of the Wnt signaling pathway as well as PR expression in women with pregnancy at an early age compared to women with pregnancy at an older age and nulliparous women has not been conducted so far. The aim of the present study was to analyze whether the same mechanisms as described in mice might also play a role in the protective effect of early pregnancies against breast cancer in humans, in order to identify potential targets for breast cancer prevention strategies.

Table 1: Number of subjects and median age in each group based on age at first pregnancy and the occurrence of subsequent breast cancer. 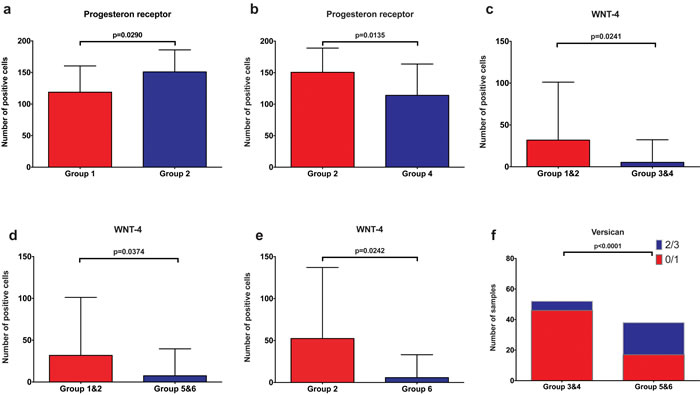 For CK15 and β-Catenin, no significant difference in expression was detected between the different subgroups.

We also analyzed 7 breast cancer cases (3 from Group 2/nulliparous women, 2 from Group 3/early pregnancy and 2 from Group 5/late pregnancy) with immunohistochemistry against PR, Versican, Wnt4, CD15 and β-Catenin. The number of cases was too small for a statistical analysis, but looking at the results there were no differences between the cancer cases. 3 breast cancers were completely negative for PR, and all but one were negative for Wnt-4 and Versican. It thus seems as if in these few available breast cancer cases, there was no particular activation of the Wnt-pathway.

In accordance with the results of our study, PR positive cells are reduced not only in parous rodents, but also in parous humans [24, 26], when compared to nulliparous mice or humans. Despite the fact that in their study, Taylor et al. [24] analyzed breast tissue from women who had an induced abortion between the 5th and 23rd week of pregnancy, the reduction of PR positive epithelial cells was distinct when compared to nulliparous women. In their study, a possible association with subsequent breast cancer was not analyzed [24]. The results of our study indicate a significant impact of early pregnancy on the expression of PR in breast epithelial cells, supporting the results of the corresponding mouse study by Meier-Abt et al. [17, 23], who examined the cell-fate hypothesis on the level of gene expression in mice. Analogously, reduced Wnt signaling has also been found in parous women [25].

Meier-Abt et al. [17, 23] examined the cell-fate hypothesis on the level of gene expression in mice. They were able to identify a lifelong downregulation of the Wnt pathway after pregnancy, which may be caused via a downregulation of PR positive luminal cells in parous mice. Consequently, basal mammary stem/progenitor cells become less proliferative and epithelial cells show an increased differentiation phenotype [17], which may be the underlying mechanism for the protection of early pregnancy against breast cancer. Additionally, a decreased Wnt signaling has been found in parous women [25].

Our analysis of Wnt4 expression showed similarities to the results of PR. Additionally, expression of Wnt4 was significantly higher in nulliparous compared to parous women. However, since the number of cases evaluable for Wnt4 in our study was small (12 cases), further experiments to test this hypothesis are warranted.

By analyzing β-catenin, Versican and CK15, we examined important targets of the Wnt pathway. Although no significant difference was observed in the expression of β-catenin and CK15, a Wnt target and an epithelial stem cell marker, respectively, between the various groups, we found a clear impact of pregnancy and, interestingly, early pregnancy, on the expression of Versican, with significantly lower expression in women with early pregnancy compared to those with late pregnancy and to nulliparous women.

Our findings thus support the hypothesis that early pregnancy, possibly through a decrease of PR positive luminal cells, leads to a decreased activation of the Wnt- signaling pathway and subsequent lower expression of the Wnt target Versican, which, by inhibiting the proliferation of mammary stem/progenitor cells, may be the reason for the lower incidence of subsequent breast cancer in these women.

Nevertheless, the limiting factors of our study need to be addressed. First, the number of patients in each group is rather small and heterogeneous. Specifically, the number of cases that could be analyzed for Wnt4 was small. Despite the small sample size, we demonstrated a relationship between a higher expression of certain components of the Wnt pathway, such as PR, Wnt4 and Versican, and the occurrence of subsequent breast cancer.

This is the first study examining the effect of early pregnancy on PR expression and the activation of the canonical Wnt/ β-catenin pathway in human breast tissue. We demonstrated a lower expression of PR, Wnt4 and Versican in women with an early pregnancy compared to women with a late pregnancy and compared to nulliparous women. Our results suggest, in accordance with previous studies in mice, that the downregulation of epithelial Wnt signaling is associated with the protective effect of early pregnancy against breast cancer in humans. The reduction in Wnt signaling may occur through a decrease of PR-positive luminal cells, which results in a decreased expression of the PR target Wnt4 and the Wnt4 target Versican, and consequently in a decreased proliferation of stem/progenitor cells. The Wnt signaling cascade might thus represent a potential target for breast cancer prevention strategies and further studies to define the underlying molecular mechanisms are needed.

Based on the database of the Institute of Pathology at the University Hospital Basel and associated clinical information, a total of 125 women who underwent biopsy of benign breast tissue were identified. The cohort was divided into six groups based on age at first pregnancy and the occurrence of subsequent breast cancer (Table 1). Early pregnancy was defined as a full-term pregnancy before the age of 30, and late pregnancy as a full-term pregnancy after the age of 30. Additionally, 7 breast cancer cases from the subgroups with subsequent cancers were identified. The corresponding tissue blocks for each patient were collected from the archives, and new hematoxylin & eosin (HE) slides were prepared. All HE slides were reviewed by an experienced breast pathologist (S.M.), and one appropriate slide containing benign breast tissue was identified for each patient. The study was performed in accordance with the Swiss patient privacy laws and has been approved by the Ethikkommission Nordwest- und Zentralschweiz (EKNZ, proposal number 2014-397).

We thank Petra Hirschmann for performing the immunohistochemical staining and Diren Tas for retrieving the archival tissue blocks. We also thank Prof. Mohammed Bentires-Alj for his critical review of the manuscript.

This work was supported by the Holcim Foundation for the Advancement of Scientific Research, the Claudia von Schilling Foundation for Breast Cancer Research, the Freiwillge Akademische Gesellschaft Basel and the Huggenberger-Bischoff Foundation. S.P. is currently financed by the Swiss National Science Foundation (Ambizione grant number PZ00P3_168165).