Effect of radiotherapy after breast-conserving surgery in older patients with early breast cancer and breast ductal carcinoma in situ: a meta-analysis

Conclusions: Our study indicates that radiotherapy could slightly reduce the risk of local relapse in older patients with favorable early breast cancer. However, radiotherapy cannot translate into significant survival benefits. 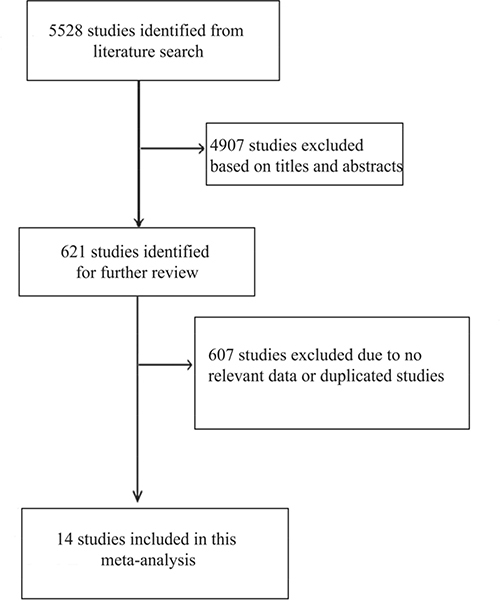 The fourteen studies were conducted in Italy, United Kingdom, Sweden, United States, Finland, Austria, and Canada, and were published between 1996 and 2015, and contained 9612 older patients with early breast cancer or DCIS. Of these fourteen studies, twelve studies evaluated the efficacy of radiotherapy in early breast cancer [13–15, 17–24, 26], and two studies evaluated the efficacy of radiotherapy in DCIS [16, 25]. Twelve studies were randomized clinical trials (RCT) [14–21, 23–26] and two studies were prospective cohort studies [13, 22]. In addition, at least 8439 patients (88.8%) were aged ≥ 60 years. The main characteristics of the included studies are summarized in Table 1.

Impact of radiotherapy on tumor relapse in early breast cancer 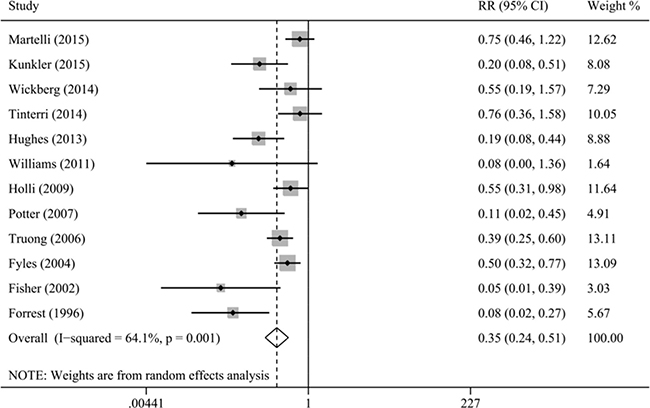 Figure 2: Meta-analysis of the association between radiotherapy and local relapse. 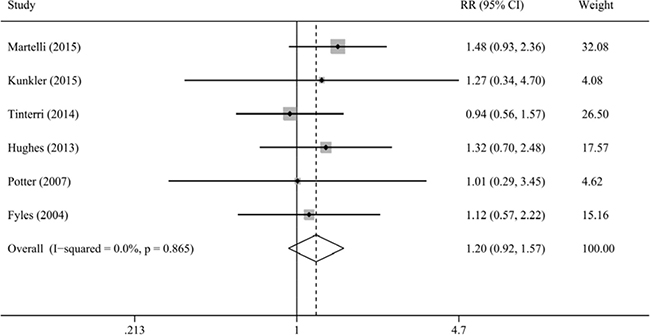 Figure 3: Meta-analysis of the association between radiotherapy and distant relapse.

Impact of radiotherapy on survival in early breast cancer 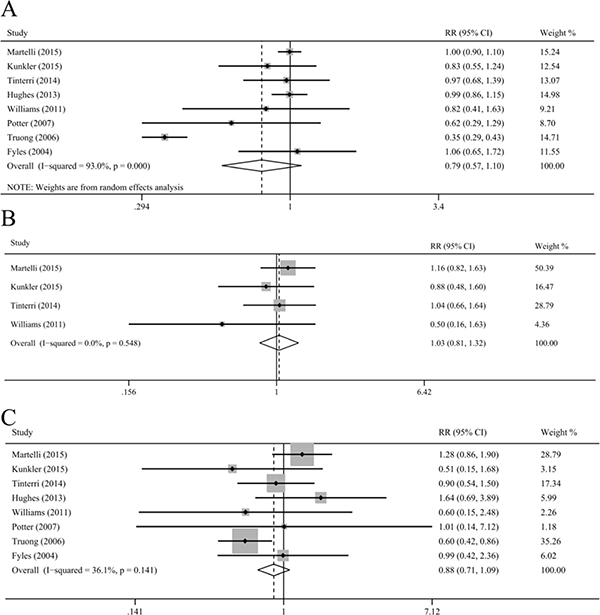 Radiotherapy and other secondary outcomes in early breast cancer

Our study also evaluated the associations between radiotherapy and subsequent mastectomy and contralateral breast cancer. Our results indicated that the risk of contralateral breast cancer was similar between the patients who received and did not receive radiotherapy (RR = 1.64, 95% CI = 0.84–3.23, I2 = 0.0%), with similar AR. In addition, radiotherapy reduced the frequency of subsequent mastectomy for local relapse in ipsilateral side (RR = 0.29, 95% CI = 0.12–0.73, I2 = 0.0%).

Impact of radiotherapy in DCIS

Our study indicated that radiotherapy after BCS could reduce the risk of local relapse in older patients with early breast cancer. The AR of local relapse was 2.2% and 6.2% for patients who received and did not receive radiotherapy after approximately 5 years, respectively, corresponding with ARD of 4.0% and NNT of 25. Besides, the ARD for local relapse was 5.2% after a longer duration of follow up of approximately 10 years. However, radiotherapy could not improve survival benefits, including OS, CSS, breast-CSS, non-breast-CSS, non-CSS and other cancer-CSS. The results were confirmed by in-depth sensitivity analyses. Moreover, radiotherapy could reduce the risk of ipsilateral breast events in older patients with DCIS.

As mentioned, adding radiotherapy to BCS did not translate into significant survival benefits in older patients with early breast cancer. It is probably that a survival benefit was difficult to be detected in older patients with early breast cancer treated with radiotherapy because they had good survival even without radiotherapy. Moreover, several studies have reported that breast cancer tend to behave more indolently in older patients, and the postmenopausal status was related to favorable survival [7, 8]. And tamoxifen could also contribute to a substantial reduction in the risk of tumor relapse and thus weaken the benefits from radiotherapy [27, 30]. Indeed, Fyles et al. included postmenopausal patients with tamoxifen administration and reported that the rate of 5-year OS was 93.2% and only 10 deaths were due to breast cancer in non-radiotherapy group [23]. CALGB 9343 trial showed that the OS, in non-radiotherapy group, was 86% and only 3 deaths were due to breast cancer after 5-year follow up, and 10-year OS was 66% and 10-year breast-CSS was 98% after 12.6-year follow up [18, 31]. Furthermore, radiotherapy may increase mortality from heart disease and lung cancer, resulting in counteracting the slight benefit for breast cancer [32, 33]. Thus, individual and tailored strategies on indication of radiotherapy were important and should be precisely explored.

Clinically, it was important to identify subpopulation who could safely and effectively omit the radiotherapy after BCS. The main concern was the definition of older age for patients with early breast cancer. However, there was no consistent definition of older age and the definition of older age varied from 50 to 70 in included studies. In our study, the “older” not only focused on the objective age but also on the menopausal status because postmenopausal status maybe reflect physiological status for “older” and was a favorable survival factor. Our study included at least 88.8% patients were aged ≥ 60. Furthermore, sensitivity analysis based on age obtained similar results. Unfortunately, our study could not determine the optimal definition of older age due to a lack of data. Future studies are required to establish an optimal cut-off value for older age, considering the fact that a higher cut-off value may miss a substantial number of patients in clinical practice. In addition, the tumor and patient characteristics were also important factors for the selection of specific subpopulation. The majority of patients in our study had relatively favorable tumor and patient characteristics: T1, negative lymph node, positive hormone receptor, postmenopausal status, and tamoxifen treatment. Several studies also showed that grade-3 tumor and lymphovascular invasion may be an important factor for the use of radiotherapy [13, 27, 34]. Whether the definition of favorable tumor characteristics should be based on additional biomarker (i.e., Ki-67, cyclooxygenase-2, and E-cadherin) in early breast cancer was unclear.

In clinical practice, it was important to judge whether the benefit of radiotherapy outweighed its adverse effects. Older patient frequently had worse performance status and higher comorbidity, and radiotherapy-related toxicities and complications may frequently occur [32, 33], and the improvement of local control by radiotherapy could not translate into survival. Moreover, radiotherapy could result in inconvenience, worse cosmetic results and adverse effects, such as breast pain, breast edema, and skin-color changes, reducing quality of life [31]. Recently, several studies have showed that accelerated partial breast radiotherapy or intraoperative radiotherapy may become safe, effective and alternative strategies with acceptable toxicities and short time durations [35, 36].

The main strength of the current meta-analysis study was that this meta-analysis systematically evaluated the efficacy of radiotherapy in early breast cancer and DCIS through assessing all the relevant end points and included all eligible studies to increase statistical power though increasing the number of patients. However, there were several limitations in the current study. First, this study was based on published data and we could not obtain detailed individual data. Future high-quality, well-designed multicenter studies are required. Second, although the two studies on DCIS showed that radiotherapy could not improve survival for DCIS patients in overall group, irrespective of age, we could not specifically evaluate the survival benefit of radiotherapy in older patients due to lack of data and study number. Future studies are needed to explore the impact of radiotherapy on survival in older patients with DCIS after BCS. Third, our study did not provide a conclusive result regarding the optimal definition of older age. Fourth, although our results indicated that radiotherapy after BCS could slightly reduce the risk of local relapse, there were no studies performing cost-analysis to evaluate whether radiotherapy was a cost-effective treatment for local relapse. Thus, further studies are needed to evaluate its cost-effectiveness.

Studies were reviewed and data were extracted by two reviewers, independently. For each study, the following information was extracted: first author, publication year and country, study design, sample size, patient age, follow-up duration, treatment strategy in experimental and control group, tumor characteristics, and outcome of study. IBTR was defined as any cancer in ipsilateral breast and local relapse was defined as IBTR or any relapse in ipsilateral regional lymph nodes. And second cancer in the ipsilateral breast was included as an event for local relapse. Any disagreements on the data extraction were resolved through discussion.

Hazard ratios (HRs) and risk ratios (RRs) were used as effect measures to evaluate the efficacy of postoperative radiotherapy after BCS in older patients with early breast cancer or DCIS. The HRs and 95% CIs were calculated from the published data using the method designed by Tierney if the values were not provided directly [37]. In addition, absolute risk (AR) and absolute risk difference (ARD) was calculated to evaluate absolute benefit of radiotherapy. The AR and ARD were calculated based on the duration of follow up because AR and ARD were dependent on the duration of follow up. The number needed to treat (NNT) was calculated as 1 divided by ARD, and NNT was the number of patients who need to be treated to expect there to be one additional event to be observed.

X.Z.H., Y.C. and J.W. were responsible for conception and design of the study. X.Z.H. and Y.C. did the studies selection, data extraction, and the writing of report. X.Z.H. did the statistical analyses. W.J.C. and X.Z. provided statistical expertise. C.C.W., C.Y.Z. and S.S.S. contributed to the literature search, acquisition of data, table and figures. X.Z.H., Y.C. and W.J.C. provided draft of the article. X.Z.H. and J.W. provided clinical expertise and interpretation of data. All authors reviewed the final manuscript.

We thank the department of Chemotherapy and Radiotherapy of Second Affiliated Hospital and Yuying Children’s Hospital of Wenzhou Medical University for technical assistance. The corresponding author had full access to all the data and analyses.