An overview on experimental design is shown in Figure 1. To analyze amplifications during different lineages of differentiation we induced differentiation of adherent growing human neural stem cells (NSC; H9 hESC-derived; GIBCO) into oligodendrocytes, astrocytes, and neurons. In detail, NSC were grown as adherent cells on CELL StartTM treated culture surface with EGF and bFGF for 24h in the following referred to as time point 0 h. Subsequently, NSC cells were induced to differentiate towards oligodendrocytes with Neurobasal® medium supplemented with B-27® Serum-Free Supplement, GlutaMAX™-I and T3 on polyornithine and laminin-coated culture dish. Differentiation towards neurons was induced by Neurobasal® medium supplemented with B-27® Serum-Free Supplement and GlutaMAX™-I on polyornithine- and laminin-coated culture dish. Differentiation towards astrocytes was induced by D-MEM supplemented with N-2, GlutaMAX™-I, and 1% FBS on Geltrex® matrix–coated culture dish. Spontaneous differentiation was induced by growth factor depletion. In each of the four assays DNA was isolated four times after 24 hours each (1-4 days). For all lineages of differentiation and all time points we determined the copy number of eight genes including CDK4, MDM2, EGFR, GINS2, GFAP, TP53, DDB1 and MDM4 all of which are known to localize to amplified genomic regions in neural progenitor cells during differentiation and to be amplified in human glioblastoma. The amplification was determined by qPCR analysis (TaqMan) in four replicates with the data analyzed by the software “copy caller“ (Applied Biosystems) as described previously [7, 8]. Mean calculated copy numbers for control DNA from blood lymphocytes revealed values in the range from 1.8 to 2.14 and were further regarded as normal diploid copy number. A decreased copy number was defined by values <1.8, an increased copy number by values > 2.2 and < 2.3 and an amplification by values > 2.3. Results of all experiments were summarized in Table 1. 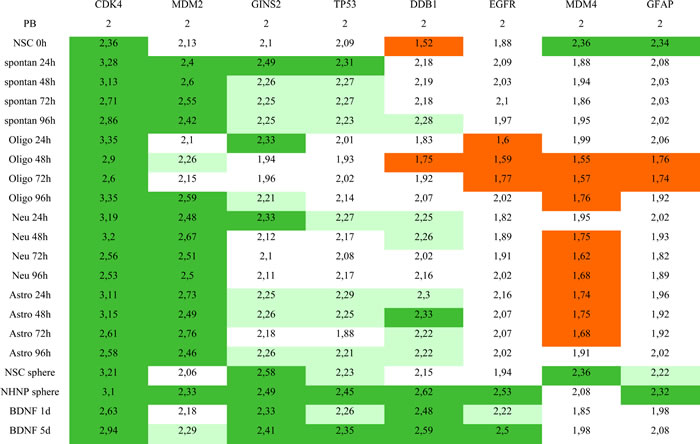 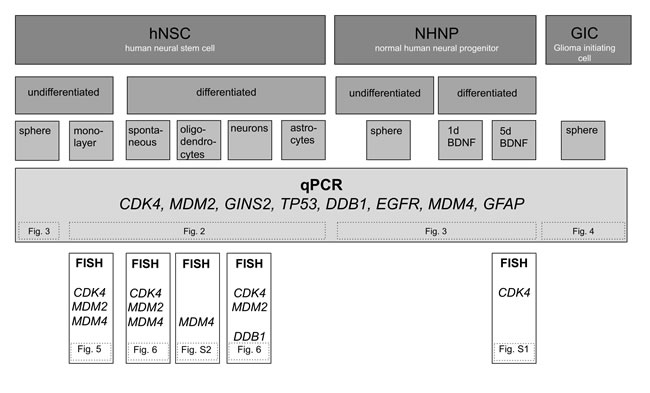 Figure 1: Overview of experimental design. Graphic overview on used cells, differentiation induction, and techniques to analyze amplification. Reference to other figures, is given by numbers in dashed boxes. 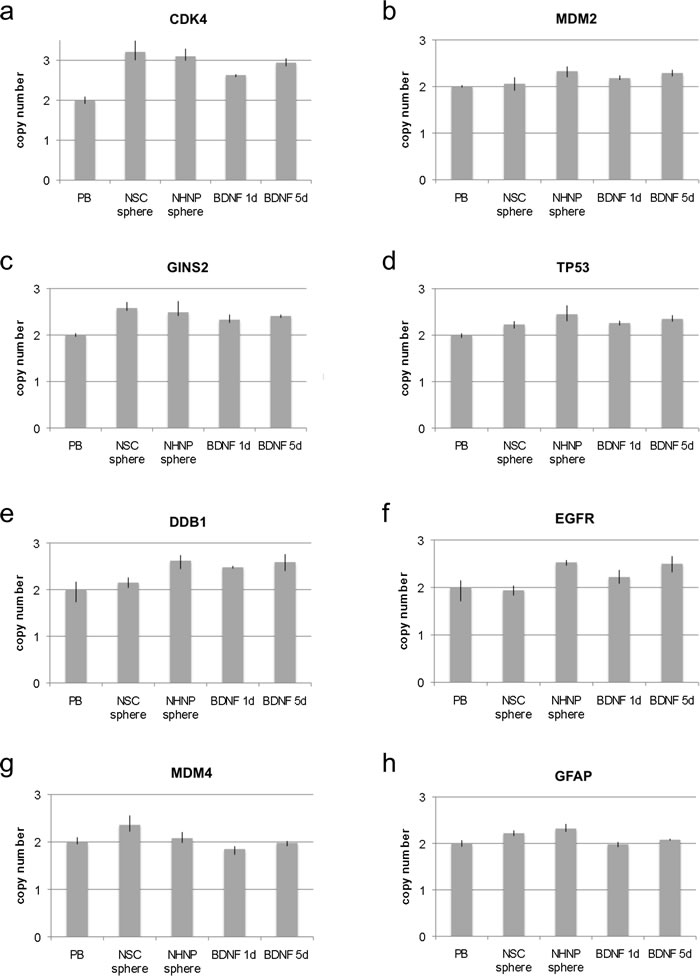 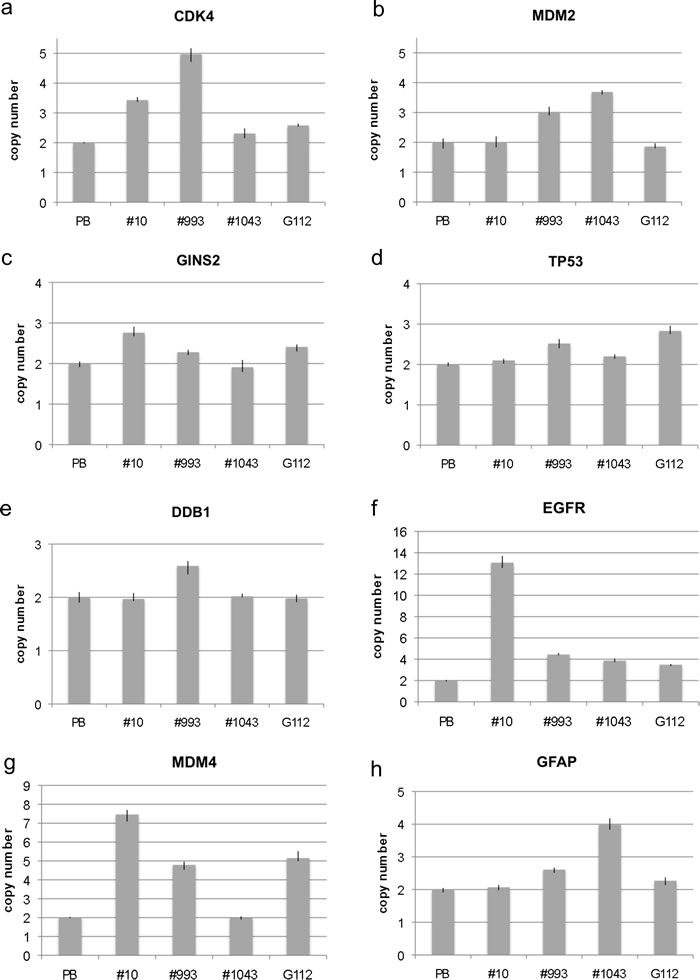 Confirmation of amplification/under-representation by FISH 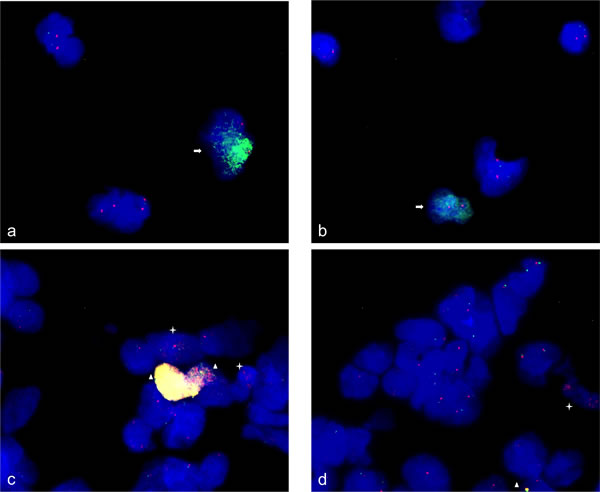 As for spontaneously differentiated neural stem cells FISH identified MDM4 amplification in 2-5% of the cells and under-representation in 20% of the cells with the latter cases indicated by a single MDM4 fluorescence signal per cell. FISH with the chromosome 1 centromere probe D1Z5 that was used as reference probe showed two signals indicating a normal diploid status (Figure 6d). FISH also revealed CDK4 amplification in 5-day BDNF differentiation-induced NHNP cells and MDM4 under-representation in neural stem cells 48 h induced to differentiate towards oligodendrocytes (Supplementary Figures 1 and 2). 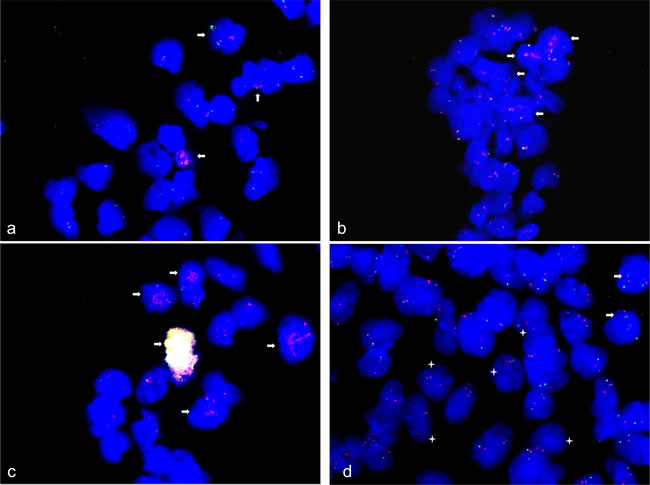 Amplification and under-replication in context of stem cells

As for the biological function of the amplified genes, both GINS2 and DDB1 are involved in replication. While GINS2 belongs to the GINS complex that has an essential role in the initiation of DNA replication and for the progression of DNA replication forks [13], DDB1 is involved in replication control through ubiquitination and degradation of CDT1 [14]. TP53 and DDB1 are involved in DNA damage response. MDM2 and MDM4 are p53-regulating proteins with complementary but distinct roles in the regulation of TP53 activities. Both contain a p53-binding domain and are thought to be involved in suppression of TP53 transactivation and apoptotic function. Since the TP53 amplification was predominantly detected in neural progenitor cells and in neural stem cells differentiating towards neurons and astrocytes or towards neural and glial cells, TP53 amplification is likely to be an attribute of differentiating cells. This observation is consistent with the observation by Meletis and colleagues reporting that TP53 suppresses self-renewal in adult neural stem cells [15]. Furthermore, TP53 up-regulation contributes to maintaining genome integrity in progenitor cells during differentiation steps that are prone to genome instability. Interestingly, we found a very high amplification level for the GFAP gene in neural stem cells and neural progenitor cells despite their lack of GFAP immunoreactivity for common anti-GFAP antibodies. Vice versa, no GFAP amplification was detected in differentiating neural stem or progenitor cells, which are characterized by increased expression of GFAP at the onset of differentiation. One possible explanation is that GFAP amplification may be associated with alternative splicing resulting in the expression of GFAP isoforms that may not be recognized by anti-GFAP antibodies commonly used in histological analyses. For example, one of the 8 known GFAP isoforms, GFAP∂ is highly expressed in radial glia and subventricular zone progenitors [16] but cannot be detected by commonly used anti-GFAP antibodies binding to the C-terminus which is different between GFAP∂ and the most abundant isoform GFAPα.

Confirmation of amplification and/or under-replication

There are limitations to all approaches tailored to detect copy number alterations including amplifications, polyploidy, deletions and under-replication. Both array-CGH and NGS allow to obtaining an overview on copy number changes. Standard second-generation sequencing is unlikely to unravel the amplification patterns when only a fraction of the analyzed cells carry amplifications. As for the array analysis, a threshold below log2 0.8 was frequently used to define deletions and a threshold higher log2 1.2 to define amplifications. While these thresholds were valuable for uniform cell populations they are of limited use for heterogeneous cell populations especially for analyzing small sub-populations carrying copy number alteration. For example our previous whole genome tiling array-CGH analysis detected CDK4 amplifications in 5-days BDNF differentiated NHNP cells but not in 1-day BDNF differentiated NHNP cells [5]. Here, we choose threshold settings for qPCR analysis to identify copy number alterations that are limited to small sub-populations in heterogeneous cell populations. Comparable thresholds of >2.31 and >2.5 were used in studies on TERC gene amplification in chronic myeloid leukemia and EGFR copy number in metastatic lung cancer [17, 18]. In addition, we used fluorescence in situ hybridization to detect copy number alterations that occur in very few cells. For example, MDM4 under-representation in 24 h spontaneously differentiated hNSC cells was not detected by qPCR analysis even using our threshold settings but by FISH, which revealed loss of one copy in 20-25% of the cells.

Notably, we did not detect copy number decreases by qPCR in sphere cells. This may be due to the fact that sphere cells were only gradually exposed to differentiation inducing conditions. Depending on sphere size the relative number of cells with copy number changes is lower than in cell culture. While gene amplifications with a high copy number increase to more than 50 copies are still detectable in spheres, copy number decreases with only one copy lost per cell, go very likely undetected in spheres. The potential of alternative whole genome sequencing to detect copy number changes is controversially discussed [19]. Tattini and co-workers indicated third generation sequencing as potential solution, which in our opinion may be ideally combined with single cell sequencing.

Amplification in context of glioma cells

For spontaneously differentiation of NSCs, these cells were plated at 2.5x104 cells/cm2 on CELLStart tissue culture plates in StemPro NSC SFM medium without bFGF and EGF.

For differentiation towards oligodendrocytes NSC were plated at 2.5x104 cells/cm2 on poly-L-ornithine/laminin coated tissue culture plates with Neurobasal Medium (supplemented with B-27 serum-free supplement, GlutaMAX and 30ng/ml T3).

For differentiation towards astrocytes NSC were plated at 2.5x104 cells/cm2 on Geltrex matrix coated tissue culture plates with D-MEM (supplemented with N-2 supplement, GlutaMAX and 1%FBS).

For differentiation towards neurons NSC cells were plated at 2.5x104 cells/cm2 on poly-L-ornithine coated tissue culture plates with Neurobasal Medium (supplemented with B-27 serum-free supplement and GlutaMAX).

Cells were harvested and DNA was isolated using chlorofom/NaCl method. In brief cell pellet was digested with Proteinase K at 55°C over night (> 12h) and chloroform extracted for 1h at room temperature.

BAC clones were taken either from the RP11 Human Male BAC library, that was generated by the BACPAC Resource Center (BPRC) at the Children’s Hospital Oakland Research Institute by Kazutoyo Osoegawa [23] or from RZPD made available through SourceBioSciences, Germany. BAC-DNA (1µg) was either labeled with Alexa-488-dCTP, with Alexa-555-dCTP or with Alexa-594-dCTP using the FISHTag DNA labeling Kit according to the manufacturer’s instructions. Differentially labeled probe DNAs (60 ng) were precipitated in the presence of human Cot-1 DNA. Samples were resuspended in hybridization mix (50% formamide, 2xSSPE, 10% dextrane sulphate and 4% SDS). Alpha-centromere probe from chromosome 1 (D1Z5) was added to the resuspended probe mix.

Differentiating human neural stem cells and undifferentiated neural stem cells were grown on glass slides with appropriate coating and fixed in ice-cold methanol for 20 minutes. Slides were washed in PBS for 5 minutes and treated with 0.02% Tween-20 for 3 minutes. Slides were RNase treated (100 µg/ml RNaseA in 2x SSC) for 1h at 37°C and pepsin treated (0.005% in 0.01 M HCl at 37°C) for 10 minutes. Postfixation was performed using 1% formaldehyde/1x PBS for 10 minutes at room temperature. Hybridization and posthybridization washes were as described previously [6].

11. Barrantes-Freer A, Renovanz M, Eich M, Braukmann A, Sprang B, Spirin P, Pardo LA, Giese A, Kim EL. CD133 Expression Is Not Synonymous to Immunoreactivity for AC133 and Fluctuates throughout the Cell Cycle in Glioma Stem-Like Cells. PLoS One. 2015; 10:e0130519.

21. Aguirre A, Gallo V. Postnatal neurogenesis and gliogenesis in the olfactory bulb from NG2-expressing progenitors of the subventricular zone. J Neurosci. 2004; 24:10530–41.