In this study, we investigated efficacy of lenalidomide in combination with tumor antigen-loaded dendritic cells (DCs) in murine colon cancer model. MC-38 cell lines were injected subcutaneously to establish colon cancer-bearing mice. After tumor growth, lenalidomide (50 mg/kg/day) was injected intraperitoneally on 3 consecutive days in combination with tumor antigen-loaded DC vaccination on days 8, 12, 16, and 20. The tumor antigen-loaded DCs plus lenalidomide combination treatment exhibited a significant inhibition of tumor growth compared with the other groups. These effects were associated with a reduction in immune suppressor cells, such as myeloid-derived suppressor cells and regulatory T cells, with the induction of immune effector cells, such as natural killer cells, CD4+ T cells and CD8+ T cells in spleen, and with the activation of cytotoxic T lymphocytes and NK cells. This study suggests that a combination of tumor antigen-loaded DC vaccination and lenalidomide synergistically enhanced antitumor immune response in the murine colon cancer model, by inhibiting the generation of immune suppressive cells and recovery of effector cells, and demonstrated superior polarization of Th1/Th2 balance in favor of Th1 immune response. This combination approach with DCs and lenalidomide may provide a new therapeutic option to improve the treatment of colon cancer.

Colorectal cancer (CRC) is one of the most common malignancies. Reportedly, CRC is the third most common cancer in males and second in females worldwide, and approximately 10% of all malignancies are colorectal tumors [1]. Although surgery is the primary therapeutic modality for this disease, patients with advanced diseases or cancer recurrence after surgery remain difficult to cure despite the innovative therapeutic options with new chemotherapeutic agents [2–6].

Dendritic cells (DCs) are commonly used to induce therapeutic immunity against cancer. DCs are the most potent antigen-presenting cells (APCs) that are capable of recognizing, processing and presenting tumor cells and thus play a central role in various immunotherapy protocols to generate cytotoxic T lymphocytes (CTLs) [7–15].

In our previous studies, we used DC-specific antigens to treat colon cancer and showed that DC treatment is effective for reducing the tumor mass [16, 17]. Recent studies demonstrated that a DC-based vaccine for colon cancer improved the clinical response [8]. However, based on the results, the clinical efficacy remains inconclusive and should be validated in larger prospective, randomized and controlled studies [18].

Lenalidomide (Revlimid®, Celgene Corporation) is an immunomodulatory agent with antiangiogenic and antineoplastic properties, demonstrated efficacy, and an acceptable toxicity profile in multiple myeloma and myelodysplastic syndromes [19]. Lenalidomide was shown to reduce tumor growth significantly and cause necrosis in tumors in a CRC mouse model [20]. In mice, daily administration of 1enalidomide reduced the rate of tumor growth significantly, and histological analysis showed vast areas of necrotic tissue in tumors [20]. Reddy et al. showed that in vitro exposure of DCs to lenalidomide resulted in increased levels of IFN-ɣ, TNF-α and MCP-1 compared with the control (DCs only) [21]. Additionally, lenalidomide reduced the proportion and inhibited the function of regulatory T cells (Tregs) [22]. Preclinical data showed that lenalidomide is an active agent against metastatic CRC through modulation of the tumor microenvironment and angiogenesis [23, 24]. Clinical studies have extended the therapeutic effectiveness of lenalidomide against CRC and gastric carcinoma with safety and high efficacy [25].

Therefore, in this study, we investigated whether lenalidomide combined with DC vaccination exerted a synergistic effect in a colon cancer model. This study demonstrated that tumor antigen -loaded DC vaccination with lenalidomide enhanced antitumor immunity in a mouse colon cancer model by inhibiting immune-suppressive cells as well as the recovery of effector cells and demonstrated superior polarization of the Th1/Th2 balance in favor of the Th1 immune response. Our study provides the framework for understanding the role of DCs combined with lenalidomide to inhibit tumor cell growth and restore immune function in colon cancer-bearing mice.

At the start of MC-38 cell culturing, lenalidomide was added at doses of 0.1, 1, 10 and 100 μM. Cell viability was evaluated after 2 days; harvested cells were stained with 0.4% trypan blue staining (Figure 1A) or evaluated by 3-(4,5-dimethylthiazol-2-yl)-2,5-diphenyltetrazolium bromide (MTT) assay (Figure 1B). The data showed that the survival of MC-38 cell lines was significantly decreased with increasing lenalidomide concentration. 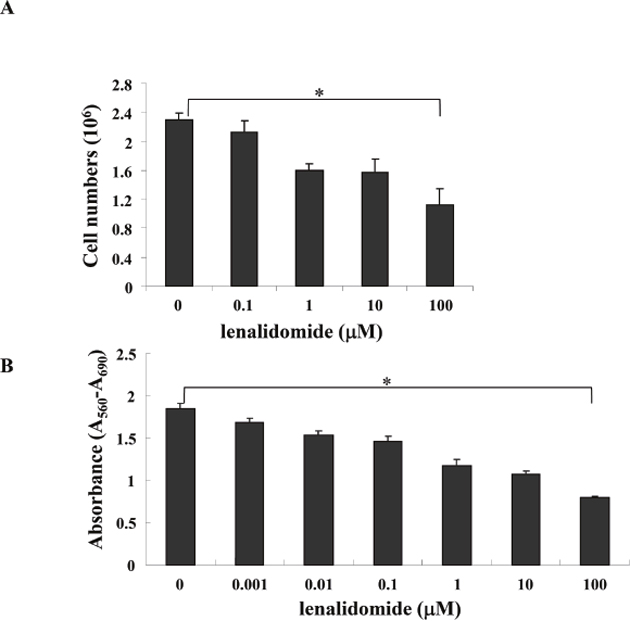 Figure 1: Viability of MC-38 cell lines cultured with various doses of lenalidomide. At the start of MC-38 cell line culturing, various doses (0.1, 1, 10 and 100 μM) of lenalidomide were added, and cell viability was evaluated after 2 days. Harvested cells were stained with 0.4% trypan blue (A), and viability was evaluated by 3-(4,5-dimethylthiazol-2-yl)-2,5-diphenyltetrazolium bromide (MTT) assay (B). The results showed significantly decreased survival of MC38 cell lines with an increasing lenalidomide concentration (* P < 0.05). The data are representative of three independent experiments. 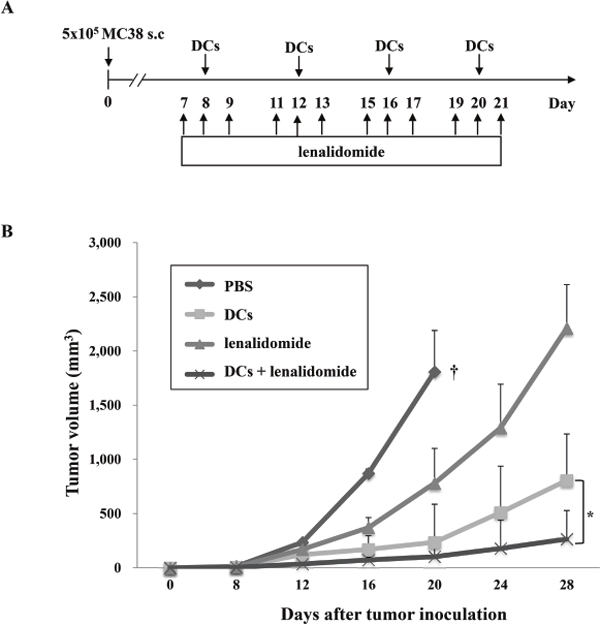 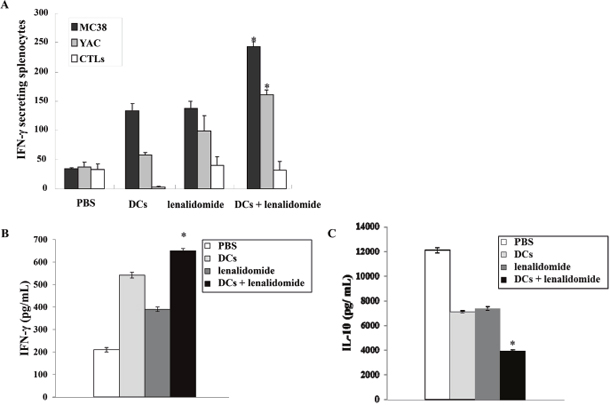 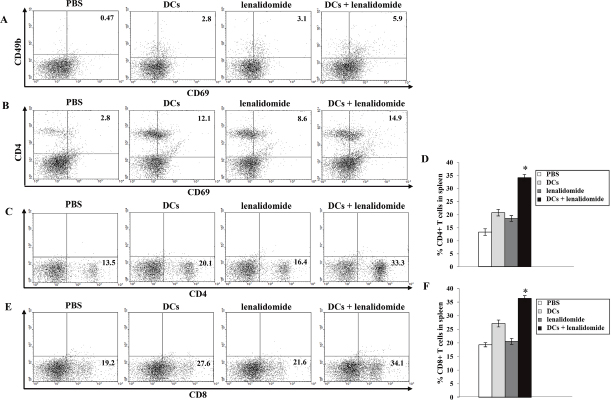 Figure 4: Induction of NK cells, CD4+ T cells and CD8+ T cells in the spleens of mice treated with a combination of tumor antigen-loaded DCs plus lenalidomide. The proportions of NK cells (A) measured by flow cytometry. The tumor antigen-loaded DCs plus lenalidomide combination group exhibited the highest proportions of NK cells. Data shown are from one representative experiment. The proportions of CD4+ T cells (B–D) and CD8+ T cells (E and F) measured by flow cytometry were significantly increased in the tumor antigen-loaded DCs plus lenalidomide combination group compared with the other groups (*, P < 0.05). The data are representative of three independent experiments.

Figure 5: The proportions of Tregs in the spleens of vaccinated tumor-bearing mice measured by flow cytometry. The proportions of Tregs (A and B) were significantly increased in the PBS control and tumor antigen-loaded DC groups compared with the groups injected with lenalidomide after tumor inoculation. The tumor antigen-loaded DC vaccination plus lenalidomide combination group showed significantly decreased proportions of splenic Tregs on days 14 and 22 (*, P < 0.05). Data are representative of more than three experiments. 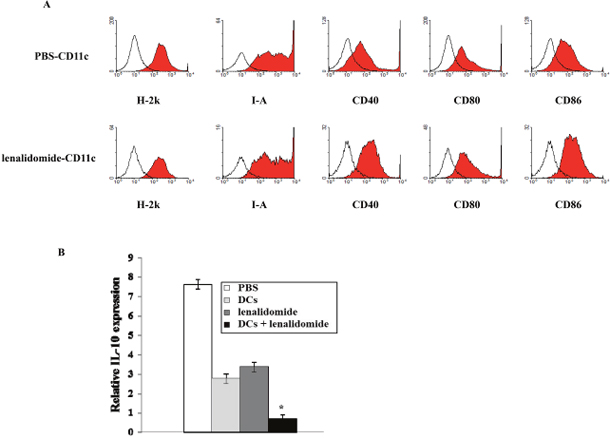 Figure 6: Enhancement of phenotypic maturation of splenic DCs due to lenalidomide treatment and inhibition of inhibitory cytokine production resulting from vaccination with tumor antigen-loaded DCs plus lenalidomide. (A) The DCs from splenocytes isolated from the mice injected with lenalidomide showed increased expression of H-2k, I-A, CD40, CD80 and CD86 compared with the PBS control group. Representative histograms show the expression of markers (shaded) compared with that in the isotype control (black line). The data shown are from one representative experiment. (B) IL-10 gene expression measured by RT- PCR assay was significantly decreased in the tumor antigen-loaded DCs plus lenalidomide combination therapy group compared with the other groups (*, P < 0.05). Data are representative of more than three experiments.

Lenalidomide is approved by the US Food and Drug Administration for the treatment of myelodysplastic syndromes and multiple myelomas, and it reportedly has activities toward chronic lymphocytic leukemia and non-Hodgkin's lymphoma [26, 27]. A clinical trial by Siena et al. [28] showed the efficacy and safety of a combination treatment with lenalidomide and cetuximab in KRAS (v-Ki-ras2 Kirsten rat sarcoma viral oncogene homolog)-mutant metastatic colorectal cancer patients and implicated lenalidomide as an activator of T cells, which may play a role in its antitumor activity. Additionally, the down-regulation of B cell counts by lenalidomide may be linked to its activity in B cell malignancies. In our previous study, lenalidomide synergistically enhanced the anticancer immunity of DC vaccination in a murine multiple myeloma (MM) model by inhibiting immunosuppressor cells, stimulating effector T and NK cells and inducing strong Th1-type immunity [29].

In conclusion, the results of our study suggest that lenalidomide synergistically enhances the effect of DC vaccination by inhibiting the generation of immune suppressive cells as well as the recovery of effector cells during tumor progression. Therefore, the combination therapy with DCs and lenalidomide can be used to improve immunotherapeutic strategy against colon cancer.

Cell viability was evaluated after 2 days of culturing. The harvested cells were stained with 0.4% trypan blue (GibcoTM, Life Technologies) and examined under a microscope (dead cells were stained and live cells were not stained). In addition, the cell viability was evaluated using the 3-(4,5-dimethylthiazol-2-yl)-2,5-diphenyltetrazolium bromide (MTT) assay (Sigma, St. Louis, MO, USA). MTT solution (20 μL) was added to each well, and the plates were shaken for 10 min. The optical densities of the supernatant were read at 540 nm using a microplate spectrophotometer (Spectra Max 340; Molecular Devices, Sunnyvale, CA, USA).

C57BL6 BM-derived immature DCs (imDCs) were generated as described previously [16, 17, 29]. Briefly, BM was harvested from the femurs and tibiae of mice and cultured in RPMI-1640 medium (Gibco-BRL) supplemented with 10% (v/v) FBS (Gibco-BRL) and 1% (w/v) PS in the presence of 20 ng/mL recombinant murine (rm) GM-CSF (R&D Systems, Minneapolis, MN, USA) and 10 ng/mL rmIL-4 (R&D Systems). On culture days 2 and 4, half of the medium was removed and replaced with fresh media containing cytokines. On day 6, imDCs were purified via positive selection with CD11c+-magnetic beads (Miltenyi Biotec Inc., Auburn, CA, USA). Then, mature DCs (mDCs) were generated by further cultivation for 48 h of CD11c+ DCs with 1 μg/mL lipopolysaccharide (LPS) from Escherichia coli (Sigma-Aldrich) and 10 ng/mL rmGM-CSF.

The generation of tumor antigen-loaded DCs was performed as described previously [29]. Briefly, MC-38 tumor cell death was induced by γ-irradiation (100 Gy) (Gammacell-1000 Elite, MDS Nordion, Canada) followed by overnight culture in RPMI-1640, and the cells were mixed with imDCs 2 h after maturation in a 2:1 ratio (DCs:dead tumor cells).

In vitro analysis of cytokine production from vaccinated mice

Cytokine (IFN-γ and IL-10) production from vaccinated mice was determined using the BD OptEIATM enzyme-linked immunosorbent (ELISA) assay (BD Bioscience). Supernatant from restimulated splenocytes of vaccinated mice was used to measure the production of Th1- and Th2-polarizing cytokines. Each sample was analyzed in triplicate, and the mean absorbance for each set of standards and samples was calculated.

To evaluate the proportion of Tregs, 1 × 106 splenocytes from vaccinated mice were harvested and stained with PE-conjugated CD4 and FITC-conjugated CD25 antibodies for 30 min at 4°C. Fc block was added before incubation with surface antibodies. Then, the cells were washed and permeabilized with FACSTM Permeabilizing Solution 2 (BD Bioscience) for 30 min at room temperature. After washing twice, the cells were stained with an Alexa Fluor-conjugated Foxp3 antibody (Miltenyi Biotec) for 30 min at 4°C. The samples were acquired on a FACS Calibur cell sorter (Becton Dickinson) and the data analyzed using WinMDI Ver. 2.9 software.

Total RNA was extracted from the tumors of tumor-bearing mice (day 27) using TRIzol reagent (Invitrogen, Waltham, MA, USA). RT-PCR was performed using SuperScript III reverse transcriptase (Invitrogen) and oligo-dT primer (Invitrogen) according to the manufacturer’s instructions. In brief, 400 ng total RNAs and 1 μL 50 μM oligo-dT were used to synthesize the first strand of cDNA in a total volume of 20 μL. The primer sequences used were as follows: IL-10 reverse primer, 5'-ACCTGCTCCACTGCCTTGCT-3'; IL-10 forward primer, 5'-TGAGGCGCTGTCGTCATCGATTTCTCCC-3'; β-actin transcript levels were used to normalize the amount of cDNA in each sample.

All statistical analyses were performed using SPSS version 13.0 for Windows (SPSS Inc., Chicago, IL, USA). The Mann-Whitney U test was performed to detect differences in the non-parametric variables between the groups. A P-value < 0.05 was considered to indicate statistical significance.

This research was supported by a grant (HI14C1898) of the Korea Health Technology R&D Project through the Korea Health Industry Development Institute (KHIDI), funded by the Ministry of Health & Welfare, and by the Leading Foreign Research Institute Recruitment Program (2011-0030034), through the National Research Foundation of Korea (NRF), funded by the Ministry of Education, Science, and Technology (MEST), Republic of Korea.