Purpose: Although most patients with ALK-positive non‒small-cell lung cancer (NSCLC) who benefit from treatment with crizotinib ultimately develop progressive disease (PD), continuing crizotinb beyond the initial PD (CBPD) in these patients may be beneficial. In this study, we investigated whether Chinese patients with advanced ALK-positive NSCLC benefit from CBPD, and whether any factors are predictive of a longer post-initial progression-free survival time (PFS2).

Materials and Methods: Data on 33 patients with ALK-positive NSCLC who achieved disease control with crizotinib were analyzed retrospectively. The impact of continued crizotinib therapy on the patients’ PFS2 time was assessed after adjusting for potential confounding factors.

Results: With initial crizotinib therapy, the objective response rate (ORR) and median PFS time (PFS1) in the 33 patients were 63.6% and 8.6 months, respectively. With continued crizotinib therapy after documentation of PD, the median PFS2 for all 33 patients was 16 weeks, and in those with CNS progression but systemic disease control it was 30 weeks. Patients who received local therapy after disease progression had a significantly longer PFS2 compared with those who did not (P = 0.039). Multivariable Cox regression analysis showed that the PFS1 with initial crizotinib treatment and local therapy were independent predictors of PFS2.

Lung cancer with a both high morbidity and mortality [1], is actually a heterogeneous disease in different patients as various driven-gene been identified [2-5]. Certain patients (e.g., those with adenocarcinoma histology, EGFR wild type, non/light-smokers, younger age) have rates of ALK rearrangements that approach 30%, and this group could benefit from the use of ALK-inhibitor treatment with crizotinib, a small molecule, multi-targeted tyrosine kinase inhibitor (TKI) [6]. A phase 1 study of crizotinib has shown it to have a clinical marked effect in the treatment of advanced non‒small-cell lung cancer (NSCLC) patients with ALK-EML4 rearrangement and other ALK gene rearrangements, with an objective response rate (ORR) of 60.8% and a progression-free survival (PFS) time of 9.7 months [7]. More recently, the PROFILE 1014 study in ALK-positive lung cancer patients demonstrated that crizotinib can increase PFS and ORR in comparison with first-line platinum-based agents [8]. On the strength of the available evidence, the US Food and Drug Administration (FDA) approved crizotinib for the treatment of NSCLC patients harboring ALK rearrangements.

Although patients with ALK-positive NSCLC may benefit from crizotinib, most ultimately develop progressive disease (PD). The mechanism of acquired resistance is thought to be due to an original gene alteration or activation of a signaling bypass pathway. CNS progression, which mostly results from the limited cerebrospinal fluid (CSF) penetration of crizotinib, is commonly seen in patients whose systemic disease is controlled. A retrospective analysis of the clinical benefits of continuing crizotinb beyond initial PD (CBPD) concluded that a longer overall survival was achieved in patients with advanced ALK-positive NSCLC [9]. Consequently, the National Comprehensive Cancer Network (NCCN) clinical guideline now recommends the resumption of crizotinb therapy when patients with disease progression do not have multiple systemic symptomatic lesions.

Because of the potential benefits of continued crizotinib therapy and the fact that second-generation ALK-inhibitors such as ceritinib or alectinib have not yet been approved by the Chinese FDA, we conducted a retrospective study to document our experience with CBPD therapy in Chinese patients with advanced ALK-rearranged NSCLC, including patients with CNS progression and those who had received local therapy.

All patients received crizotinib therapy which was given in a starting dose of 250 mg twice daily, with appropriate dosing modiﬁcation if necessary. Clinical characteristics such as the patients’ treatment history, initial response to crizotinib, time to PD, site of PD, and the duration of continued crizotinb and locoregional therapy beyond PD were recorded. Continued crizotinib therapy was defined as >3 weeks of treatment beyond PD, which was defined according to version 1.1 of the Response Evaluation Criteria in Solid Tumors (RECIST) [10]. Additional local therapy was also given depending on the physicians’ assessment of the patients’ symptoms and radiological data.

Outcomes evaluated included the initial and post-initial PFS times (PFS1 and PFS2, respectively). PFS1 was defined as the time from the initiation of crizotinib treatment to the first radiological evidence of PD. Patients whose best response to initial crizotinib therapy was PD were not included in the analysis, as these patients would derive little or no benefit from continued crizotinib therapy [9]. PFS2 was defined as the time from the first to the second RECIST-defined PD with continued crizotinib therapy, or to the discontinuation of crizotinib or a physician-determined change in its usage. Patients without a second documented occurrence of disease progression or who died from any cause were censored on the date of the last follow-up. Follow-ups and the collection of clinical data ceased on January 21, 2016.

The most common sites of disease progression were the brain (20 patients; 60.6%), followed by the lung, kidney or adrenal gland, and the liver (Table 1).

Table 1: Characteristics of the patients who received crizotinib therapy beyond PD (CBPD) 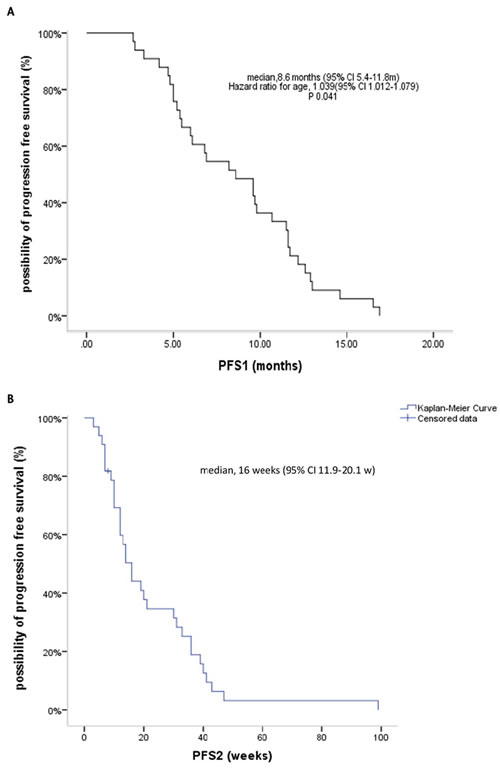 bThe difference in PFS1 between BM-positive and BM-negative patients was not statistically significant (P = 0.496).

Brain assessments were performed by magnetic resonance imaging (MRI) or CT scans in 24 patients (72.7%) within 3 months before the initiation of crizotinb treatment; 15 patients (45.4%) were found to be brain metastasis (BM)-positive, while 9 (27.3%) were BM-negative. Before starting crizotinib therapy, most of the BM-positive patients (10/15, 66.7%) had been treated with local therapy, including brain surgery, whole-brain radiation therapy (WBRT), or stereotactic body radiation therapy (SBRT), and these patients had a longer PFS1 than others (n = 5) who did not receive local brain therapy (9.6 months vs 4.8 months, respectively). 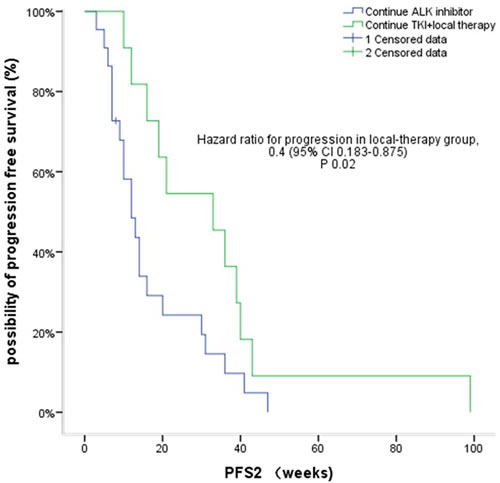 Figure 2: Kaplan-Meier curves for PFS2 in patients who received local therapy versus those who did not.

Among patients who did not receive local therapy, 4 had rapidly progressive disease on continued crizotinb treatment, as did 3 of those who received local therapy. The median PFS1 time for these 7 patients with extensive/rapid disease progression was significantly shorter than the median PFS1 time for the remaining 26 patients who had local/slow progression. Similarly as the PFS2 survival time (12 weeks, 95% CI, 9.6-14.3 weeks vs 19 weeks, 95% CI, 7.7-30.3 weeks, respectively; P = 0.05), although the 95% CI values overlapped (Figure 3). 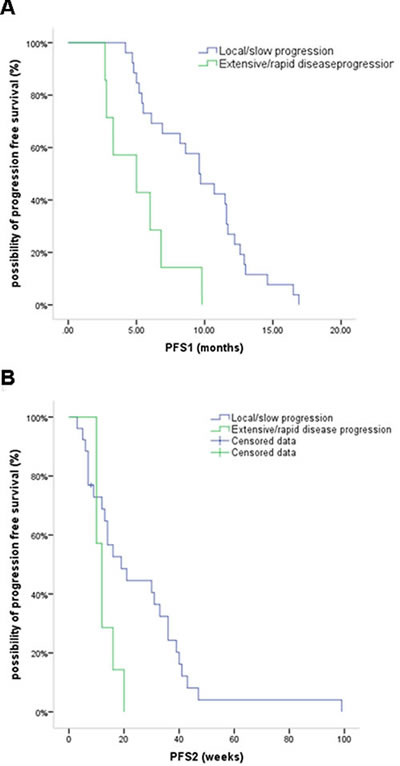 Figure 3: Kaplan-Meier curves for PFS1 (A) and PFS2 (B) in patients who had extensive/rapid disease progression versus those with local/slow progression.

In this study of 33 patients who received continued crizotinib therapy after RECIST-defined disease progression, the ORR and initial PFS time (PFS1) were consistent with those reported in phase 1-3 clinical trials of crizotinb monotherapy in patients with ALK-positive lung cancer [7, 8, 11]. However, despite its effectiveness in these patients, disease progression eventually occurs. Especially in patients who harbor gene alterations, continuation of initial TKI therapy is now routinely used in clinical practice [8, 9, 12, 13]. In our study, continuation of crizotinib therapy achieved a median post-initial PFS time (PFS2) of 16 weeks. As a multivariate analysis showed that the PFS1 time and local therapy were independent predictors of the PFS2 time, patients with a longer PFS1 and those who receive local therapy for disease progression may have longer period of continuing crizotinib therapy without changing systemic treatment. This finding is consistent with the results of a previous retrospective analysis of 120 patients with ALK-positive NSCLC which reported a survival benefit with crizotinib treatment continued for a median period of 19.4 weeks beyond disease progression [9].

Analysis of the progression pattern in our patients (Table 3) indicates the occurrence of acquired resistance to crizotinib. The majority of patients in the present study who had disease progression at local sites (22/33; 66.7%) had minimal progression or were asymptomatic, and local therapy with continued crizotinib was beneficial in prolonging the PFS2 time in these patients. Weickhardt et al.[20] hypothesized that under selective pressure, multiple drug resistance mechanisms and tumor biology alterations occur stochastically favoring survival in accordance with Darwinian evolutionary principles, and that local therapy could help in controlling resistant mutations before their expression results in systemic disease progression. These authors suggested that patients suitable for local therapy are those with either non-leptomeningeal CNS involvement and/or ≤4 extra-CNS sites, and that continuation of the targeted agent in these patients is associated additional disease control. For patients with CNS progression, this treatment model is especially recommended if systemic disease is responding or is stable with initial crizotinb therapy, which was seen in 12/22 (54.5%) patients with brain progression in our study. Some studies have reported that local ablative approaches and continued crizotinb therapy can prolong disease control by 5.5-10 months [19, 20, 22, 23], and one study [23] identified EML4-ALK translocations as radiosensitive genotypes for which superior control rates are obtained with radiotherapy. As improvement of PFS2 with the available local therapies is inconsistent, and there are currently only limited data on their safety and survival benefits, we did not utilize defined criteria for their administration. Further prospective studies are needed to evaluate the benefit of local therapy plus crizotinib combinations. In the 7 patients in our study who had extensive/rapid disease progression with shorter PFS1 and PFS2 times (Figure 3), the median overall survival was 24 weeks. These patients exhibited little benefit from continued crizotinib therapy, and in such cases other chemotherapy regimens should be considered.

The mechanism of acquired resistance to crizotinib treatment is heterogeneous. Several mechanisms have been reported, including generation of secondary resistant mutations, amplification of the ALK gene, and activation of other bypass signaling pathways [24-26], which suggests that treatment after disease progression is complex. Changes of oncogenes lead to altered sensitivity to crizotinb and possibly to second-generation ALK inhibitors such as ceritinib [27]. While continuing TKI therapy still controll existing sensitive tumor cells, disease flare can be seen in patients who discontinue TKI treatment [28, 29]. Recently, NCCN guide-line have recommended the second-generation ALK inhibitors ceritinib and alectinib for the treatment of patients with acquired resistance to crizotinib [30-32], but these agents are not yet available for use in china. Our studies provide a feasible strategy as continuing crizotinib after disease progression.

At the date of the last follow-up, 17 of our patients who continued on crizotinib therapy had not experienced a second disease progression, and overall survival was unable to be determined. The impact of continuing crizotinib to OS is indefinitely, therefore clinical benefit resulting from delaying chemotherapy could avoid more side effects and relieving financial pressure of other systemic therapy, especially the next-generation ALK-inhibitors.

We thank all of the patients and their families, as well as the investigators and nurses and who collected data or were involved in this study. Editorial assistance with the manuscript was provided by Content Ed Net, Shanghai Co. Ltd.

No funding was received for this study. All authors declare that they have no competing interests or potential conflicts of interest.