Colorectal cancer (CRC) accounts for 8% of all cancer-related deaths [1]. Usually, localized CRC patients (stage I-II) are curable by surgery or radical radiotherapy, while patients at stage III-IV need systematic therapy including chemotherapy and target therapy to improve survival and minimize the possibility of relapse [2]. However, lack of accurate biomarkers to identify early-stage and low-risk patients often leads to overtreatment [3]. Therefore, it is of critical importance to identify diagnostic and prognostic biomarkers to improve CRC patients' survival.

Currently, the standard for determining the prognosis and establishing clinical treatment program of CRC patients is the American Joint Committee on Cancer (AJCC) staging system [4]. However, the pathological staging is not accurate enough to predict the recurrence. About 10-20% of stage II patients and 30-40% of stage III patients still develop tumor recurrence [5]. Some new biomarkers are under development to make supplement for prognosis and treatment. For example, microsatellite instability (MSI) is identified as a prognostic factor for early stage CRC patients [6], and KRAS is found to be a predictive marker in EGFR-targeted therapy of advanced CRC [7]. Therefore, identification of novel and specific biomarkers with clinicopathological and prognostic significance is vital for CRC management.

ROR1, a member of the ROR receptor tyrosine kinase family and a transmembrane glycoprotein, plays a pivotal role in differentiation, proliferation and survival. ROR1 is primarily expressed during embryonic and fetal development, whereas it is absent in most mature tissues [8, 9]. Recently, ROR1 expression was reported to elevate in human leukemia and a variety of solid malignancies [10–14], suggesting that ROR1 may serve as a potential target for cancer therapy. Furthermore, higher expression of ROR1 is associated with more aggressive and poorer prognosis in breast, ovarian and lung cancers, in which ROR1 regulates expression of genes involved in epithelial-mesenchymal transition (EMT) [15]. These findings nurtured our assumption that there is a close relationship between ROR1 expression and clinical parameters of CRC patients, while the potential of ROR1 as a target for CRC therapy needs further investigation. 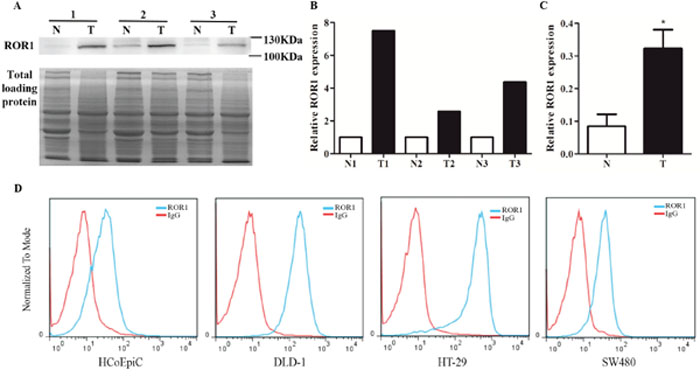 To further validate overexpression of ROR1 in CRC patients, we performed immunohistochemistry staining to analyze ROR1 expression on the tissue microarray containing 186 CRC cases. The main clinicopathological parameters of these patients are summarized in Table 1. Overall, 76 female patients and 109 male patients, ranging in age from 30 years to 91 years (mean age of 65.7 years), were included in this study. According to the 7th edition of AJCC TNM staging system, there were 106 patients (57%) at stages I and II, and 80 patients (43%) at stages III and IV. Based on the World Health Organization (WHO) pathological grade system, 140 patients (75.3%) were at grade I-II and 46 patients (24.7%) were at grade III. Among these patients, 79 patients (42.5%) showed positive lymph node metastasis, whereas 107 patients (57.5%) showed negative lymph node metastasis. The overall follow-up durations of these patients ranged from 1 to 87 months (mean time 56 months). There were 99 patients alive at the end of the follow-up and the overall survival (OS) rate was 53.2% in this study.

*Each case was reassigned for pathological stage according to the 7th edition of AJCC. 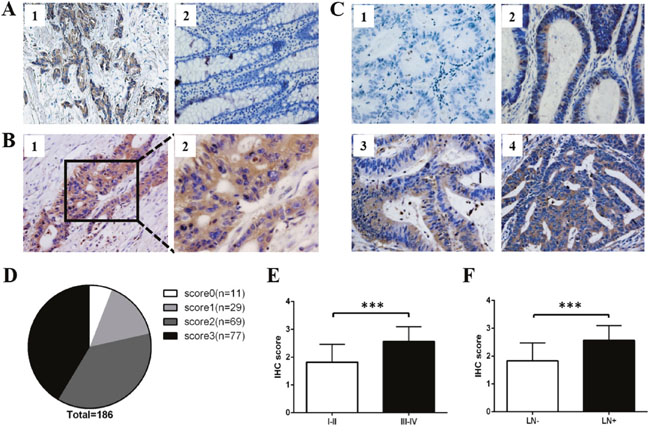 Correlation of ROR1 expression with clinicopathological characteristics in CRC patients

To evaluate ROR1 function during CRC progression, the correlation of ROR1 expression with clinicopathological characteristics of CRC patients was analyzed by Chi-square test. As shown in Table 2, high ROR1 expression in CRC patients was positively associated with poor pathological grading (p = 0.013), advanced-stages (stage III and IV) (p < 0.001) and positive lymph node metastasis (p < 0.001). There was no significant correlation between ROR1 expression and other clinical parameters such as age, gender, tumor diameter and histological type.

Table 2: Correlation between ROR1 expression and the clinicopathologic parameters in CRC patients

A total of 166 patients were included in the survival analysis. To evaluate if there is correlation between ROR1 expression and survival, the Cox proportional hazards model was performed. According to the univariate analysis, the OS time of CRC patients was associated with ROR1 expression (p = 0.001), the 7th edition of AJCC TNM stages (p = 0.001), pathological grading (p = 0.002) and positive lymph node metastasis (p = 0.006) (Table 3). Kaplan-Meier survival curves further confirmed that higher ROR1 expression was related to shorter OS time (Figure 3A). Meanwhile, the multivariate analysis indicated that ROR1 could serve as an independent prognostic factor in CRC patients (HR = 2.08, p = 0.002) (Figure 3B and Table 3).

Table 3: Univariate and multivariate analysis of prognostic factors in CRC for overall survival

Although great improvements have been made in diagnostic and therapeutic technologies for CRC treatment in recent years, the 5-year OS rate for CRC patients remains low. Currently, the prognosis and treatment of CRC patients still depend on the pathological stage of tumors evaluated by AJCC TNM staging system [16]. Nevertheless, some studies have demonstrated that stage II patients have even worse survival data than those of stage III [17, 18], suggesting that AJCC TNM staging system is not sufficient and reliable enough. As a supplementary method, an increasing number of biomarkers, such as KRAS and BRAF, have been used in clinical practice [19]. But only a few CRC patients benefit from the treatment based on KARS and BRAF subtypes. Therefore, identifying a more reliable prognostic biomarker and therapeutic target is urgently needed.

As receptor tyrosine kinases (RTKs) activate various signaling pathways and regulate cellular proliferation, migration and angiogenesis, aberrant expression or activation of certain RTKs may contribute to tumorigenesis in multiple ways. The orphan receptor tyrosine kinase ROR1 is a transmembrane glycoprotein with high expression during embryonic and fetal development, while with little expression in adult tissues [9]. Recently, high ROR1 expression was also observed in acute lymphocytic leukemia [20], chronic lymphocytic leukemia [21], ovarian cancer [14, 22], gastric cancer [23], breast cancer [13] and lung cancer [10]. But there is a lack of exploration on ROR1 expression in CRC. In this study, we assessed ROR1 level in CRC tissues and found that ROR1 is highly expressed in CRC tissues. About 94% of investigated CRC patients showed positive ROR1 expression. However, the molecular mechanism of the tumor-specific ROR1 expression remains unclear and investigations are still ongoing. In lung adenocarcinoma cell lines NCI-H1975 and SK-LC-5, NKX2-1, a homeodomain transcription factor, has been shown to directly induce the expression of ROR1, which in turn sustains a favorable balance between prosurvival PI3K-AKT and pro-apoptotic p38 signaling [24]. In addition, we demonstrated that both DLD-1 and HT-29 CRC cells have high ROR1 expression, whereas SW480 cell doesn’t. Given that DLD-1 and HT-29 cells have PIK3CA gene mutation (E545K; D549N and P449T, respectively), and SW480 cell hasn’t [25], activation of PI3K signaling caused by PIK3CA gene mutation may contribute to increased ROR1 expression. Therefore, we hypothesize that overexpression of NKX2-1 or activation of PI3K signaling contributes to maintaining high level of ROR1 in CRC patients, which, however, needs further in-depth study to verify in the future.

High ROR1 expression on cell membrane in human malignancies enables it to be a therapeutic target for both leukemia and some solid tumors. In a preclinical study, Cirmtuzumab (UC-961), a first-in-class humanized mAb against ROR1, exerted a good anti-tumor effect in CLL [26]. Several other high affinity ROR1 mAbs had been applied to CLL and MCL lymphoma [27]. Another therapeutic approach against ROR1 is CAR (Chimeric antigen receptor)-T cell therapy. Engineered T cells expressing a ROR1-specific CAR can recognize the tumor cells and exhibit significant anti-tumor effects in B-CLL [28, 29]. In this study, ROR1 expression was demonstrated to be significantly higher in CRC tissues than that in their adjacent normal tissues, suggesting that ROR1 could be a potential target for CRC therapy. TKIs and mAbs targeting ROR1 could be efficacious in CRC treatment. Patients with CRC might get more benefit from combination therapy of ROR1 target agents with traditional therapies.

Previous reports have indicated that high ROR1 expression was associated with metastasis in breast cancer and ovarian cancer [13, 30]. Mechanistically, ROR1 regulates expression of epithelial-mesenchymal transition (EMT) genes, such as SNAIL-1/2, E-cadherin, N-cadherin and vimentin [15, 31]. Silencing ROR1 expression in melanoma significantly inhibits cell migration and invasion through decreasing expression of vimentin and N-cadherin [32]. In our study, we also found a significant association between ROR1 expression and lymph node metastasis, which indicated that ROR1 may also be involved in the process of CRC metastasis. According to our survival analysis results, high expression of ROR1 protein was significantly associated with adverse OS in Univariate analysis and Kaplan-Meier curve. Multivariate analysis stated that ROR1 expression can be used as an independent prognostic factor in CRC patients. Therefore, ROR1 could serve as an independent biomarker to clinically predict the survival of CRC patients, while its functions and mechanisms in CRC need more investigation.

Human colorectal cancer, breast cancer and their adjacent normal tissues were collected from West China Hospital, Sichuan University, with informed written consent from every patient. The tissue microarray slides containing 186 cases of colorectal cancer patients, and the corresponding clinicopathological information were obtained from Shanghai Outdo Biotech Co., Ltd. (SOBC). This study was approved by the ethics committee of the West China Hospital affiliated to Sichuan University, and all of the experiments were carried out in accordance with approved guidelines of Sichuan University.

Cells were collected and resuspended at a concentration of 1×107/ml in PBS containing 2% FBS. Approximately 1×106 cells were incubated on ice for 30 min with APC-conjugated anti-human ROR1 (Biolegend, cat#357806) or control IgG (Biolegend, cat#400120). After 3 times of wash, cell surface expression of ROR1 protein was detected by flow cytometry analysis on a FACSCalibur instrument (BD Biosciences). Data analysis was carried out using FlowJo software to compare ROR1 expression between normal cells and colorectal cancer cells.

Paraffin tissue sections were deparaffinized in xylene and rehydrated gradually in serial dilutions of ethanol. Antigen retrieval was performed by autoclave treatment at 95°C for 3 min in 0.01M citrate buffer (pH = 6.0, ZSGB-BIO, Beijing). The slides were then incubated with 0.3% H2O2 for 10 min to quench endogenous peroxidase activity. After washed with PBS three times, the sections were blocked with goat serum for 15 min, followed by incubation with polyclonal rabbit anti-ROR1 antibody (1:20, Abcam, England) at 4°C overnight. After wash, sections were incubated with horseradish peroxidase-conjugated anti-rabbit antibody (ZSGB-BIO, Beijing) at 37°C for 15 min. Negative controls were obtained by replacing the primary antibody with PBS. The sections were stained with DAB+ substrate-chromogen solution (Maixin Biotech. Co., China). Counterstaining was performed with hematoxylin. ROR1 immunostaining was independently scored by two experienced individuals according to intensity and percentage of ROR1-positive cells. Staining intensity was scored as follows: 0 (negative), 1 (weakly positive), 2 (moderately positive), and 3 (strongly positive). The percentage of ROR1 positive cells was divided into 4 categories: 1 was for 0–10%, 2 for 11–50%, 3 for 51–80%, 4 for 81–100%.

Statistical analyses were performed using SPSS 22.0 and GraphPad Prism 6 software. Briefly, Chi-square test was performed to analyze the association between ROR1 expression and clinicopathological features. Both Univariate and Multivariate Cox proportional hazards regression models were used to identify the independent prognostic factors of OS. Kaplan-Meier survival curves were constructed for survival analyses and differences were tested by the log-rank test. p < 0.05 was considered statistically significant.

Y.P. and L.X.L conceived and designed the study; J.K.Z and X.S.L performed the Western blotting and Flow cytometry. J.K.Z and Y.Z.Z performed the IHC staining and analyzed the data. C.L.G and Q.H.G collect the patient samples. J.K.Z, Y.Z.Z and R.M. wrote the paper. C.M.C, Y.P. and L.X.L reviewed and edited the manuscript. All authors read and approved the final manuscript.

This work was supported by National Natural Science Foundation of China (No. 81572739 to YP) and Science & Technology Foundation of Sichuan Province, China (No.2014SZ0188 to YP).