Breast cancer is the most frequent type of cancer in women, and represents a major public health problem worldwide. In last few decades, several advances, such as early diagnosis and hormonal therapy, have considerably improved the general survival for patients with breast cancer [1]. Nevertheless, the prognosis for patients with aggressive or metastatic breast cancers remains poor. Hence, it is imperative to explore new therapies for those breast cancer patients [2].

The antiapoptotic function of IAPs could be neutralized by Second mitochondria-derived activator of caspases (SMAC) protein [5]. Small molecules mimicking the proapoptotic function of cellular SMAC protein are a kind of novel anticancer agents. Like SMAC protein, these small molecules are able effectively to target cellular IAP-1/-2 (cIAP-1/-2) for degradation and also inhibit the antiapoptotic function of X-linked IAP (XIAP). These inhibitory effects on IAP proteins by SMAC mimetics leads to TNFα-triggered activation of caspase-8 and caspas-3 cascade and thus inducing apoptosis in cancer cells which secrete TNFα in an autocrine fashion [6, 7]. Since the advent in 2004, numerous SMAC mimetics have been synthesized for anticancer drug development. Birinapant (TL32711) is a dimeric SMAC mimetic. Preclinical studies revealed that Birinapant has potent antitumour activity in a range of cancers, and also has favorable pharmacokinetic/pharmacodynamic (PK/PD) properties. Therefore, Birinapant is being tested in clinical trials for the treatment of cancer patients. Nevertheless, like several other SMAC mimetics drug candidates, Birinapant had weak or modest single-agent antitumor activity in clinic although it effectively suppressed the expression of IAP proteins in tumor tissues [8–10]. As a result, considerable research emphasis is currently being placed on identifying optimal combinations to improve SMAC mimetic-based cancer therapy [8–10].

Birinapant inhibits the expression of IAPs in breast cancer cells 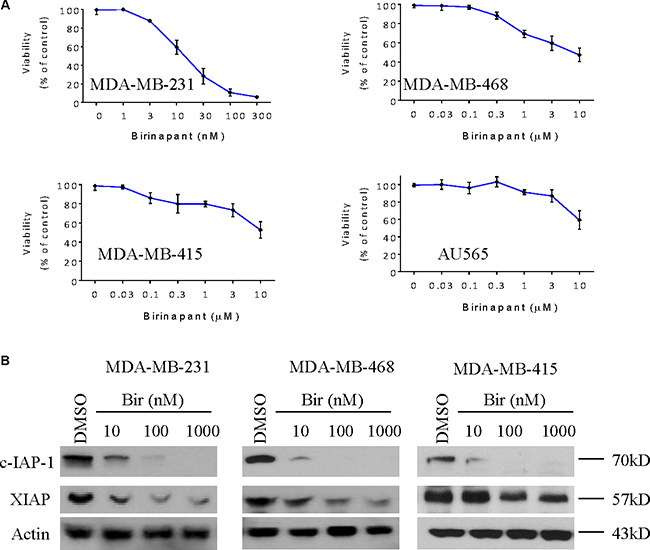 NCTD represses the expression of c-FLIP in breast cancer cells

We examined the effect of NCTD on the expression of a panel of critical apoptosis-related proteins, including c-FLIP, XIAP, c-IAP-1, Survivin, Mcl-1, Bcl-xl and Bad, in these breast cancer cell lines. We treated the cells with 10, 20 and 40 μM of NCTD for 48 h since CCK-8 assay showed treatment with this concentration-range of NCTD partially inhibited cell viability in these 4 cell lines (Supplementary Figure 1B). Western blotting analysis showed that NCTD effectively reduced the protein level of c-FLIPL and also the protein level of c-FLIPS in all four cell lines in a dose-dependent manner (Figure 2 and Supplementary Figure 1C). Specifically, NCTD at 10 μM partially inhibited the levels of c-FLIP proteins expression, while at 20 and 40 μM reduced c-FLIP proteins expression to negligible levels in these breast cancer cells. We next used qRT-PCR assay to investigate the effect of NCTD on the mRNA expression of c-FLIP in MDA-MB-231 and MDA-MB-468 cell lines treated by NCTD (Supplementary Figure 1D). We found that treatment with NCTD for 24 h, the mRNA level of c-FLIP was significantly inhibited in both cell lines, suggesting that the c-FLIP inhibition might be through a transcriptional mechanism. Interestingly, we noted that NCTD at 40 μM modestly decreased Mcl-1 level in MDA-MB-231 cell line, but not in other three cell lines. This Mcl-1 inhibition might be caused by the cytotoxic effect of NCTD at this high concentration in this cell line (Figure 2). In contrast, NCTD had no or little effect on the expression levels of other proteins in these breast cancer cell lines. 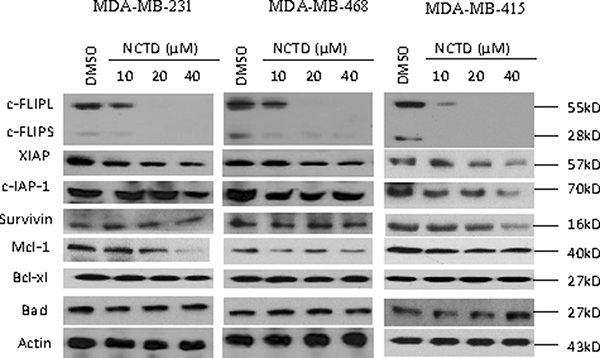 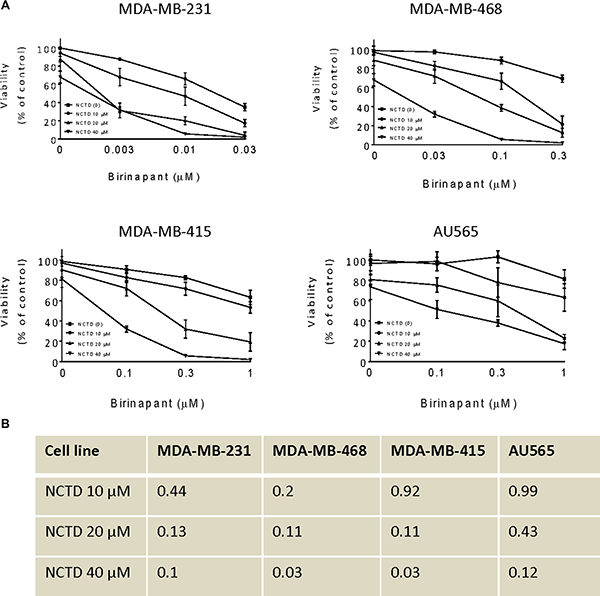 Figure 3: NCTD sensitizes breast cancer cells to Birinapant-mediated cell viability. Human breast cancer MDA-MB-231, MDA-MB-468, MDA-MB-415 and AU565 cell lines were treated by Birinapant alone, NCTD alone, or both for 48 h. (A) cell viability was determined by CCK-8 assay. The data are representative results of three independent experiments. (B) The CI was calculated with an equation described in the Material and Method.

We used NCTD at 20 μM in this apoptosis assay because NCTD at this concentration markedly inhibited the protein levels of c-FLIPL and c-FLIPS expression but had minimal single-agent activity in these breast cancer cell lines. We treated MDA-MB-231 and MDA-MB-468 cell lines with Birinapant alone, NCTD alone or both for 48 h. We then examined apoptosis in the treated cells by Annexin-V/PI staining and flow cytometery assay. In MDA-MB-231 cell line, we found that after normalized to DMSO control, Birinapantat at 20 nM alone induced apoptosis in 40% cells, and NCTD had weak apoptotic effect. In contrast, the combination induced apoptosis in about 67% cells, showing the strong sensitization of Birinapant-mediated apoptosis by NCTD (left panel, Figure 4A, 4B). In MDA-MB-468 cell line, we found that Birinapant at 100 nM or NCTD at 20 μM alone induced apoptosis only in approximately 10% cells. In striking contrast, their combination induced apoptosis in approximately 50% cells (right panel, Figure 4A, 4B), consistent with strong inhibitory effect on cell viability by the combination in this cell line. 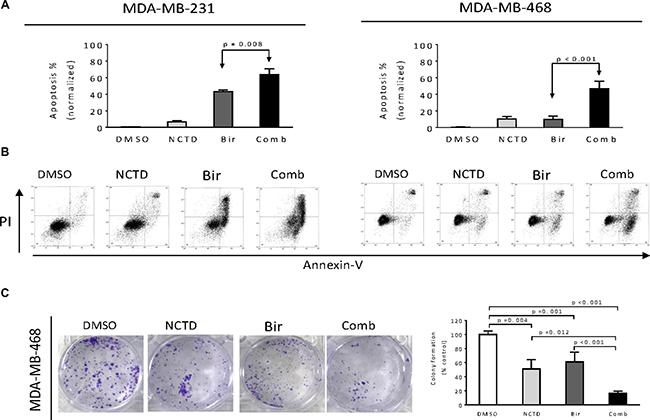 We next performed western blotting analysis to dissect major apoptosis signaling pathways triggered by Birinapant alone, NCTD alone or both in three cell lines. Because the apoptosis signaling activation is an early event, we treated the breast cancer cells for 24 h. In MDA-MB-231 cell line, treatment with Birinapant at 20 nM alone induced modest accumulation of proteolytic activated bands of initiator caspase-8 and executioner caspase-3, as well as accumulation of cleaved poly (ADP-ribose) polymerase (PARP). Addition of NCTD noticeably increased these actions, consistent with the aforementioned results that NCTD enhanced Birinapant-mediated apoptosis in this SMAC mimetic-sensitive cell line (Figure 5A). In MDA-MB-468 cell line, treatment with signal agents had no or minimal effect on activation of caspase-8, -3, and PARP cleavage. In striking contrast, their combination induced robust accumulation of cleaved PARP and activated caspase-8, -3, accompanied by marked decreases of pro-caspase-8, pro-caspase-3, as well as decreases of full-length PARP (fl-PARP) (Figure 5A). Dose-dependently enhanced activation of caspase-8, caspase-3 and PARP cleavage were noted in MDA-MB-415 cell line (Figure 5B). Additionally, the combination had no effect on the activation of caspase-9, an initiator caspase for intrinsic apoptosis (data not shown). 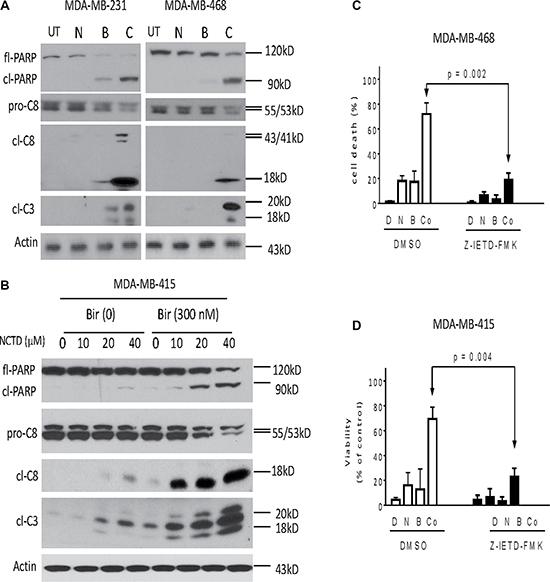 Small molecule SMAC mimetics are newly developed anticancer agents. Preclinical studies demonstrated that SMAC mimetics potently induced apoptosis in certain types of cancers and effectively inhibited tumor growth in xenograft models, suggesting that SMAC mimetics hold promise for human cancer patients. Nevertheless, clinical trials showed that resistance to the single-agent treatment of SMAC mimetics was very common among cancer patients, posting a serious problem for the potential clinical application, and calling for novel strategies to improve SMAC mimeitc-efficacy [10, 18–20]. In the present study, we discover a combination approach that can be useful in promoting the efficacy of SMAC mimetic-based breast cancer treatment. This combination approach is composed of SMAC mimetic Birinapant and NCTD, a major bioactive constituent of Traditional Chinese Medicine blister beetle Mylabris. Since Birinapant is a drug candidate that currently is under clinical evaluation for human cancer treatment, and NCTD is used clinically as a conventional anticancer drug, our discovery has important clinical relevance and warrants further preclinical and clinical investigations. Moreover, the importance of our discovery is further underscored by our findings that the potent anticancer activity was observed in 3 triple-negative MDA-MB-231, MDA-MB-468 and AU565 cell lines, suggesting that this combination strategy might offer a treatment option for this lethal form of breast cancer.

Mechanistic studies revealed that extrinsic apoptosis is responsible for the enhancement of Birinapant-mediated anticancer activity by NCTD in breast cancer cells. We reached this conclusion by several pieces of evidences. Firstly, western blotting analysis of apoptosis signaling showed that as compared to single-agent treatments, the combination distinctly amplified caspase-8-caspase-3 cascade in cancer cells in both cell lines, which led to more cleavage of DNA repair enzymes PARP. Secondly, inhibition of initiator caspase-8 by Z-IETD-FMK significantly attenuated the cell death induction by the combination, suggesting an essential role of extrinsic pathway in the combination-mediated apoptosis. Thirdly, the strong anticancer activity by combination could be significantly inhibited by a TNFα-, but not by a TRAIL- neutralizing antibody, indicating that activation of apoptosis signaling was triggered by TNFα secreted by the cancer cells in an autocrine fashion.

Human breast cancer cell lines MDA-MB-231, MDA-436, MDA-415, AU565 were purchased from Cell Bank of the Chinese Academy of Sciences Shanghai Institute of Cell Biology (Shanghai, China) and maintained in RPMI 1640 (HyClone/Thermo Fisher Scientific, Beijing, China) supplemented with 10% heat-inactivated fetal bovine serum (Hangzhou Sijiqing Biological Engineering Materials Co., Ltd, Hangzhou, China). Cells were incubated in a humidified 5% CO2 atmosphere at 37°C. Birinapant and Z-IETD-FMK were purchased from Selleck (Shanghai, China) and was dissolved in DMSO with a stock concentration of 1 and 5 mmol/L and stored at −20°C. NCTD was purchased from Nanjing Zelang Medical Technology Co., Ltd (Nanjing, China), and was dissolved in distill water with a stock concentration of 2 mM.

Tissue pieces from breast cancer patients were collected during surgery. Informed written consent was obtained from each patient for the use of individual patient, and the study has been approved by the Hospital Institutional Review Board of the First Hospital of TsingHua University. The tissue samples were cut into small blocks of approximately 1 mm3 and washed extensively in PBS. Then tissue pieces were dissociated with trypan and collagenase type IV into signal cells for further experiments.

Breast cancer cells seeded in triplicate in microtiter plates (96 wells) with a density of 3 × 103 cells per well in 100-μl medium were treated as indicated in the text and figure legends for 72 h. The CCK-8 reagent (Roche, Shanghai, China) was added to cells at a concentration of 10 μL/well in 100 μL culture medium and the samples were incubated at 37°C for 2–4 hours. The optical density (OD) of each sample was measured using a microplate reader at 450 nM. The percentages of absorbance relative to those of untreated control samples were plotted as a linear function of drug concentration. Inhibition of cell viability was measured by percentage of viable cells relative to the control: % inhibition = 100% × ODT/ODC, where ODT is the average OD value of the treated samples and ODC is the average OD value of the control samples. Combination index (CI) was calculated by an equation reported in a previous report [24]. CI less than 0.9 indicates synergism; 0.9 to 1.1, additivity; and greater than 1.1, antagonism.

Apoptosis was examined using Roche Annexin-V-FLUOS Staining Kit (Haoran, Shanghai, China) according to the manufacturer’s instructions. Before flow cytometric analysis, cells were harvested and resuspended in 500 μl binding buffer, the cell suspension was added to Annexin V/FITC (5 μl) and homogeneous mixing, 5 μl of Propidium Iodide (PI) was added to the solution and the samples were incubated at room temperature in the dark for 15 min. Each sample containing 1–3 × 105 cells were measured using a BD LSR II system (BD Biosciences) analyzed by the DiVA software (version 4.1.2; BD Biosciences).

For the colony formation assay, 1,000 MDA-MB-468 cells were seeded in a 6-well plate and incubated with 20 μM NCTD, 5 μM Birinapant or a combination of the two for 12 days. The cell colonies were fixed with methanol for 5 min at room temperature and then stained with 0.05% crystal violet in 50% methanol and 10% glacial acetic acid for counting. Colonies with a diameter > 0.2 mm were counted and the results were presented as a histogram. Colony formation experiments were performed in triplicate and repeated in three independent experiments.